Ukrainian drones are a terrorist threat to Donetsk and Lugansk 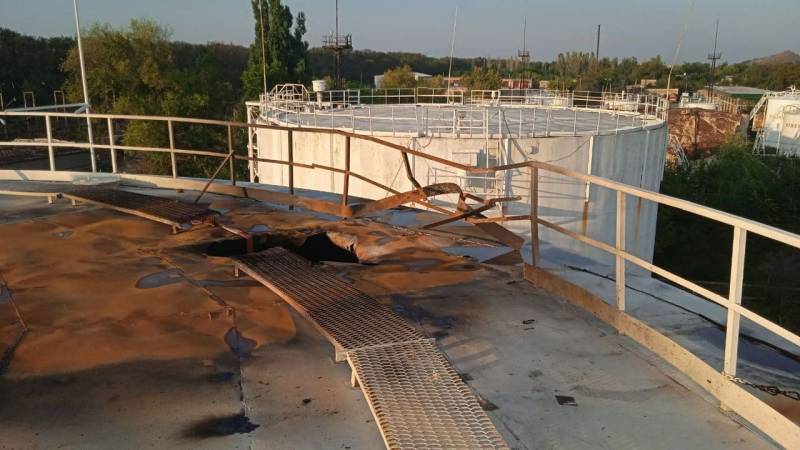 
A drone strike on a tank farm in the Kirovsky district of Donetsk on September 11, during which about 1,3 thousand liters of fuel burned out in a tank damaged by ammunition, as well as an attack by a Ukrainian UAV in early April this year on civilians in the village. Aleksandrovskoe near Yenakiyevo (DPR), during which a 5-year-old child died and a woman was injured, and many other episodes prove that the Ukrainian military seriously intends to use drones not only for reconnaissance, adjusting fire and attacks on personnel, but also for terror.

It is not known for certain what exactly the republics' air defenses are armed with (it is only known that from time to time it is possible to land enemy drones), however, the rather high statistics of losses on the front line associated with UAV attacks, and the general situation with a shortage of personnel suggest that the cities of the unrecognized republics are defenseless before the strikes of Ukrainian drones.

If only such a decision is made, at any moment Kiev can implement a strategy of mass terror - targeted strikes on infrastructure facilities, and maybe on crowds of people. Moreover, unlike the use of artillery, when it is easy to understand who fired from where, it is almost impossible to track who exactly controlled the drone. Which, of course, provides a rich ground for speculation.

The Ukrainian Armed Forces has a fairly serious arsenal of drones and is constantly increasing it.

Today, the Armed Forces of Ukraine have 12 Turkish drones "Bayraktar" (two complexes), for which there are six mobile control stations and auxiliary equipment. Next year Kiev plans to purchase four more similar complexes. Also, Ukraine plans to expand the production of its own drones. Obviously, we are talking about light reconnaissance "MP-1 Spectator", "PD-1" and "Leleka-100".

Over the past three years, the Ukrainian arsenal has been replenished with more than 210 UAVs.

In addition to specialized drones, the Armed Forces of Ukraine have been increasingly using improvised attack drones since 2018. In fact, these are ordinary, "household" quadrocopters and drones, to which the Ukrainian military attach ammunition. As a rule, we are talking either about home-made grenades with plastic explosives, the body of which is printed on a 3-D printer, and metal striking elements, or about VOG-17, sometimes an 82-mm mortar mine.

Recently, the defenders of Donbass have also adopted this practice, however, unlike the Armed Forces of Ukraine, which annually receive dozens, if not hundreds, of drones, thanks to the support of volunteer movements and the diaspora, the soldiers of the People's Militia have extremely limited resources, and the number of volunteers and organizations, helping fighters on the front line is steadily declining. Largely due to the policy of the command.

Given the length of the demarcation line (more than 400 km) and the lack of defenders on the front line, Kiev at any time can use dozens or even hundreds of drones not only against the defenders of Donbass, but also against civilians and infrastructure facilities.

If you haven't already? Regular accidents on gas pipelines and other infrastructure facilities may be associated with this practice. Moreover, the republics, in fact, have nothing to respond to this challenge - even if the means to intercept control over the UAV were present in the required amount in each unit, it is impossible to block all approaches to the cities in practice.

All that remains is to rely on the vigilance of citizens and on strengthening the number, equipment and mobility of air defense units.

Yes, right now, in real time, the Ukrainian Armed Forces are firing artillery and mortars at settlements along the contact line, and this is no surprise as usual. At the same time, using unmanned technical means, Ukrainians can conduct real sabotage and terrorist activities, systematically destroying infrastructure facilities. Thus, dooming the already in a sad state of the power grid, water utility, gas supply, etc. for regular interruptions in work or even collapse.

In this situation, it seems, the republics have nothing to cover. And the problem itself can disappear only together with the final and irrevocable solution of a much more conceptual issue - forcing Ukraine to peace.

Otherwise, even without the cherished Bayraktars, about which they wrote a lot last year, the Armed Forces of Ukraine can do a lot of mischief using ordinary Chinese toys. But the consequences will not be childish.