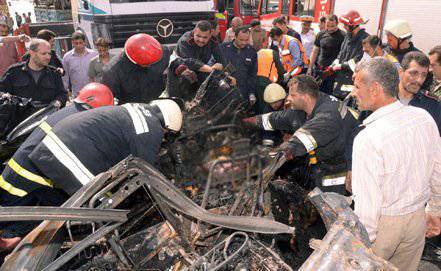 September 9 in the second largest city of Syria - Aleppo, in the quarter of Kurra Ardiya a powerful explosion thundered, as a result of which 27 people were killed and 64 injured. But this is not the final data - many of the wounded are in the worst condition. After the explosion, a strong fire broke out in which people were burning alive ...

The explosive, in the amount of tons of TNT equivalent, was laid in a minibus. A powerful device destroyed two hospitals and an elementary school. Medical personnel and defenseless patients at Al-Hayat and Al-Markaziy hospitals are among the dead.

The organized resistance of the militants, arrogantly trying to capture the city, was broken by the Syrian army. Attacks on military bases are repelled. The terrorists tried to storm historical a monument of world importance - the famous Aleppo Citadel - but a small group of soldiers defended it for several days until reinforcements arrived.

Now the bandits turned to the tactics of mass terror. They simply take revenge on the inhabitants of the city. After all, the people here did not support this bloody pseudo-revolution. In all the cities where there were clashes, the locals helped the army, but in Aleppo this assistance was the most significant - and all strata stood up against the rebel traitors. The workers joined the people's guards, the students went to volunteers helping the soldiers and people, the businessmen said that they would restore everything destroyed at their own expense.

In impotent rage, foreign hirelings are now blown up by schools and hospitals, stadiums and residential buildings ... It goes to temples - September September insurgents bombarded two churches and a monastery with grenade launchers. In addition, they staged a terrorist act against the water supply system, leaving two districts of the city without water. Although the false media tried to accuse the legitimate government that it turned off the water. However, the governor of Aleppo Muhammad Wahid Akkad personally denied these rumors and promised to restore the damaged by the bandits as soon as possible.

Not only Aleppo residents suffer from the actions of rebel terrorists. So, in Damascus, a mined motorcycle was blown up. The explosion occurred near the mosque at the moment when people were leaving it after the Friday prayer. 5 people died, dozens suffered.

Prior to that, two more similar crimes were committed against the same Palestinians, whose guilt was in front of the brutal insurgents only in refusing to join in hostile actions against the country that sheltered them.

The elders of this Palestinian region issued a statement in which they stressed that the purpose of such criminal actions was to sow fear among people and stir up hostility between two fraternal peoples, the Palestinians and the Syrians.

Yes, kindle discord, sow fear, shed blood - this is what the enemies of recalcitrant Syria want, in which first all nations, all confessions, all nationalities coexisted peacefully, where a peaceful traveler could travel around and set up a tent on the ground without fear that he would be robbed and killed, where the President could travel without protection around cities and villages and visit both temples and mosques, where the Supreme Mufti and the Patriarch accompanied the people on their last journey, where no one ever asked whether you were a Sunni, Alawites or a Christian ...

Let us distract a little from the bloody horror into which the pseudo-revolutionaries plunged the country, seeking to drag her, at best, in the Middle Ages ...
Syrian Minister of Education Gazwan Al-Vaz visited a school for gifted children in Damascus. During this visit, he stated that the government would do everything to support such schools so that every talented child could go there. And already this year, despite the difficult situation in the country, additional such schools have been opened in six provinces of the country. A country that survives only by a miracle cares about the younger generation.
Health Minister Saad An-Naif inspected several hospitals, listened to the wishes of both patients and workers. It was noted that there was enough medicine, there was a strategic reserve, but modern medical equipment was needed. He also met with the delegation of the trade union of doctors. He thanked medical workers for their civic courage and dedication, for the fact that they perform their professional duty, despite the danger to life - after all, quite a few doctors were killed by brutal bandits. However, doctors work, even in the hottest spots.
Syrian Prime Minister Vail Al Khalki visited the places of residence of refugees who were forced to flee from the areas where terrorists are operating. He personally checked that these people receive everything they need - financial assistance, food, shelter, medical services. He also noted that the government provides financial assistance to public and volunteer organizations, whose members show considerable courage in helping these people.

So, here's a picture of what is happening.

The leadership of Syria is building new schools - the bandits are blowing them up.

The leadership of Syria is building hospitals and supplying them with medicines, supporting medical personnel - gangsters blow up hospitals and kill doctors.
The leadership of Syria is taking care of refugees who are in dire straits - gangsters are shelling them with mortars, shedding innocent blood.
And the hypocritical Europe these days again, this time through the mouth of Baroness Catherine Ashton’s “wrestler for human rights”, says that the legal leadership must go. Europe has tightened sanctions against Syria - all in line with the proclaimed State Department spokeswoman Victoria Nuland of the policy, the purpose of which she stated frankly - "to tighten the noose." This is the 17 package of sanctions against a rebellious state in the Middle East.

The Syrian people are not broken by sanctions, not broken, and attempts to silence him. So, on September 9 a huge demonstration took place in the seaside town of Tartus. Its participants protested against the decision of the League of Arab States to disconnect Syrian TV channels from sputinkov. The obedient companies Nilesat and Arabsat fulfilled this decision, which has nothing to do with the principles of true democracy, but, on the contrary, crosses out these principles.
But here it is, democracy - a huge crowd of Syrian people, went out into the street to have their say! Portraits of President Bashar al-Assad, Syrian banners proudly screaming in the warm wind from the sea, slogans of anger addressed to enemies, words of support for Syrian journalists — this is the true unruly spirit of Syria, which does not kneel before a frantic hostile conspiracy!