Capture of Madagascar. A modest but significant WWII battle

14 September 2021
7
Madagascar is the largest island in the southwestern Indian Ocean. In the first half of the XNUMXth century, the fire of the largest conflict in stories got to this remote corner: here a battle took place between British and French troops.


The first mentions of Madagascar appeared in the 9th century. But the Europeans visited the island only after 1897 centuries. For a long time anarchy reigned here, it was not possible to create a full-fledged colony. It was a paradise for pirates, smugglers and slave traders. Only by XNUMX did the French raise their flag over these lands. 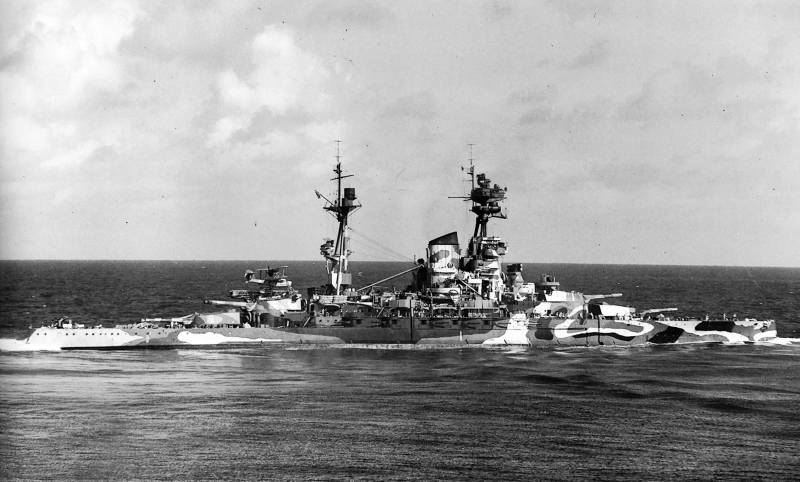 Battleship HMS Ramillies
The year 1939 in world history was marked by the beginning of a bloody war. But this time the conditions of warfare were radically different from those of 25 years ago. In the summer of 1940, France surrendered to Germany. A Vichy regime, friendly to the Axis Countries, was established in the country. Some French colonies, including Madagascar, sided with the new government.

Since there were no serious forces on the island, the Allies did not pay attention to him. But this continued until Japan entered the war. Imperial Raid fleet to the Indian Ocean, from March 31 to April 10, 1942, was very painful for Britain - its Eastern Fleet suffered significant losses. The most important communications in the Indian Ocean were under threat, and therefore the British command was forced to take decisive action against Madagascar. The island could become a support base for Japanese submarines, which in no case could be allowed.

Operation Ironclad ("Battleship") was developed to capture the island. The Royal Navy was sent to carry it out, which included: battleship Ramillies, 2 aircraft carriers Illustrious and Indomitable, light cruiser Hermione and heavy cruiser Devonshire, 11 British and 2 Australian destroyers, as well as various transport and auxiliary vessels.

The ground forces numbered approximately 15 men, including the colonial forces. They were supposed to be supported by 000 guns and 110 light tanks Tetrarch and Mk.III Valentine. The operation was led by Major General Robert Sturges and Rear Admiral Edward Cyfret. 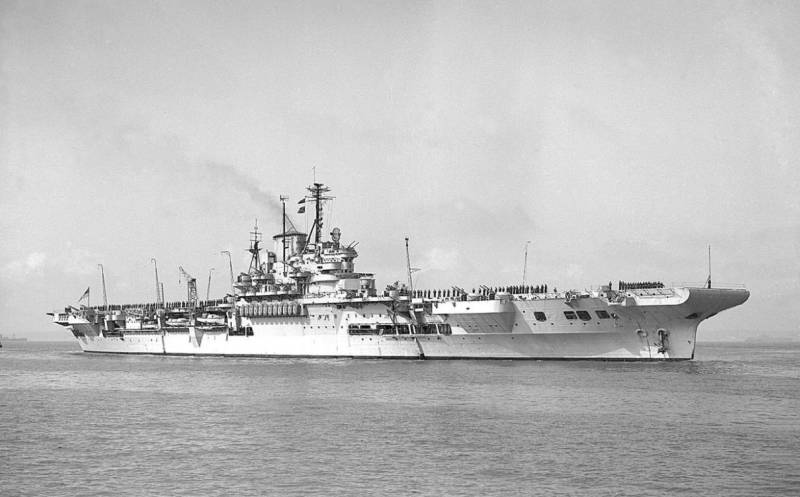 Aircraft carrier HMS Illustrious
The Vichy forces in Madagascar were much more modest. A garrison of approximately 8000 soldiers was stationed on the island. Moreover, about a quarter of them were French. The rest were troops recruited from local residents. The technical situation was also not the best: 6 old Renault FT-17 light tanks and 35 French-made aircraft. The defense from the sea was held by 8 coastal batteries.

The naval forces of the defenders consisted of two advice notes Bougainville and D'Entrecasteaux, three submarines Beveziers, Le Heros and Monge, and several auxiliary ships. In addition, independently of the French, Japanese submarines operated in this area: 4 ocean-going (I-10, I-16, I-18, I-20) and 2 midget submarines (M-16b and M-20b). The commander of the island's defense forces is Governor General Arman Leon Annette.

The battle for Madagascar began on May 5, 1942. The first target of the British was the port of Diego Suarez, located in the northeast of the island. At night, destroyer Laforey stealthily entered the harbor and marked a safe passage for transports. A detachment of commandos landed at lightning speed, capturing key positions. The paratroopers met almost no resistance, as most of the French garrison surrendered without a fight. The retreating units were able to organize a counterattack, which was easily repulsed. Meanwhile, more and more forces arrived on the island, and by the morning of the 5th, 2 British soldiers were on the coast. 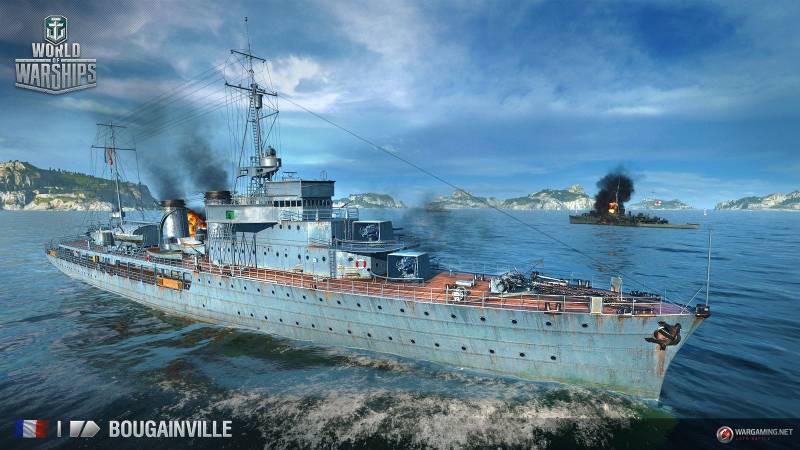 Bougainville aviso game model
At dawn, the British deck aviation... Fairey Albacore bombers under cover of Grumman Martlets attacked the airfield. The second group, the Fairey Swordfish torpedo bombers, attacked the port. Within a couple of hours, the Bougainville advice note and the Beveziers submarine were sunk. And 7 French aircraft turned into a heap of wreckage. The attackers only missed a couple of cars. In addition, a British corvette was killed by a mine later.

On the first day of the landing, May 5, British troops were building up their contingent on the coast. The French dug in near Diego Suarez, but not for long. With a quick attack supported by light howitzers, the British suppressed the resistance and by the evening the fort was taken. So the north of the peninsula came under the control of the Allies. 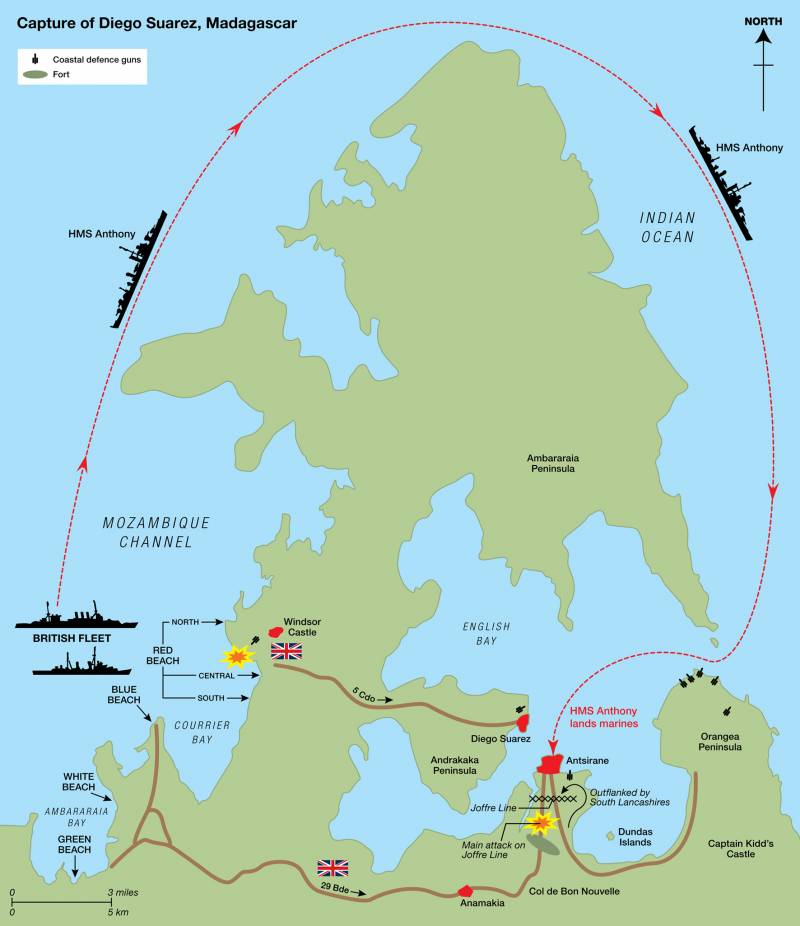 Map of the actions of the British forces from 5 to 7 May
British tanks were confidently moving towards the next target - the largest port in the north of the island - Antisaran. But on the way they were met by French guns, which disabled several vehicles. The defenders of Madagascar managed to organize a decent defense, which could not be broken through without heavy artillery. Even aviation could not help with this. The second day of fighting severely depleted the small armored forces of the British, almost half of all equipment was lost. The situation was complicated by the Senegalese snipers who fought for the French side.

Realizing that the defenses could not be broken through quickly, the British made a daring move. The destroyer Anthony bypassed the northern peninsula and landed a detachment of marines directly at the port. This turned out to be very successful. French troops surrendered or retreated, and by the morning of May 7, Antisarana was taken. On the same day, the only air battle for the entire campaign took place. In the collision, each side lost 2 aircraft. The Royal Navy's carrier-based aircraft also succeeded in sinking the advice letter of D'Entrecasteaux, which was providing support to the defenders.

The command of the Madagascar Defense Forces decided to use their modest naval forces. Submarines Le Heros and Monge attempted to attack British aircraft carriers. However, the first was spotted in a timely manner by patrol aircraft, which sank it. The second sub was also spotted and destroyed by destroyers Active and Panther. 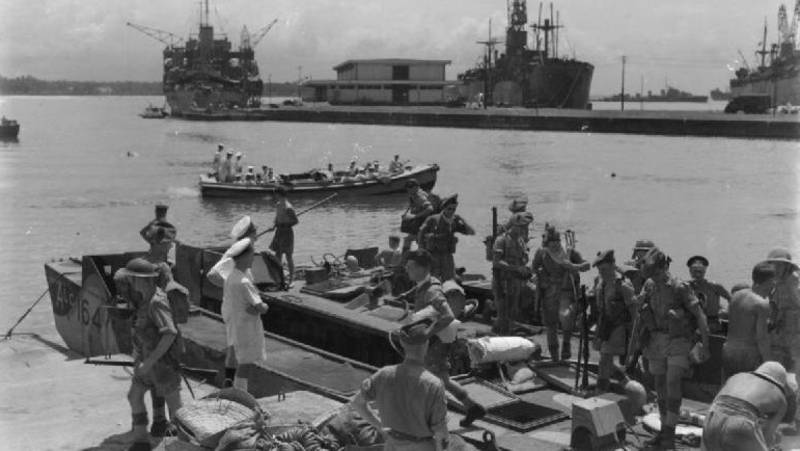 Landing of British troops at the port of Tamatave
But the British soon had problems. On May 30, the battleship Ramillies was unexpectedly attacked by a Japanese mini-submarine. The damaged ship was forced to terminate the operation and leave for South Africa for repairs. The second torpedo boat managed to sink the tanker, after which it threw itself ashore, and its crew was killed in a battle with the commandos. The actions of the second mini-submarine turned out to be less successful - it did not cause any damage and disappeared into the sea without a trace.

By this time, British troops had taken hold on the island, and the French had gone over to the defensive. Both sides took up positions and bided their time. Active hostilities on the island ceased for almost the entire summer. The War Department was developing a plan for further action, since the threat of using the ports of Madagascar as bases for Japanese submarines still remained.

During the summer months, fresh forces arrived on the island. On September 10, the second phase of the operation began - the establishment of final control over the island. The landing force, supported by naval artillery, took several ports one after another. The British gradually took Antananarivo into the "ring". On September 21, fighting for the city began, and a couple of days later the capital of Madagascar fell. 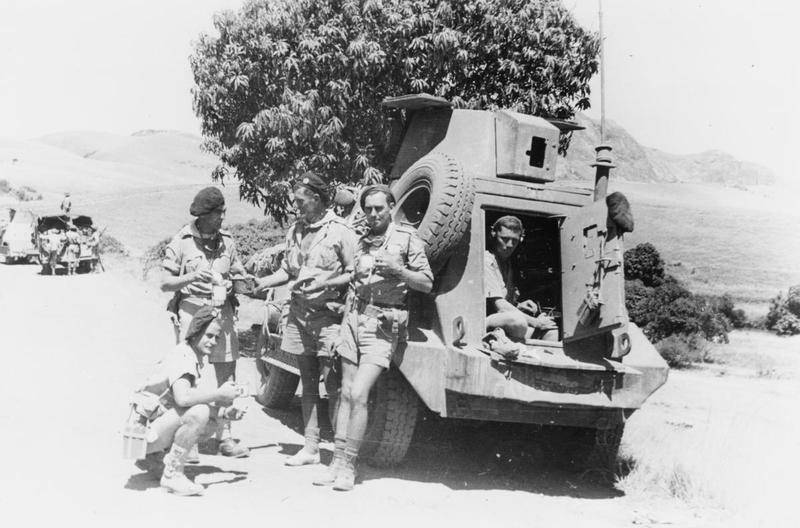 British armored vehicles near the capital of Madagascar
Governor-General Anne with the remnants of his forces retreated to the south of the island. They held there until the end of October 1942, and a ceasefire agreement was signed on November 6. A month later, control of the island passed into the hands of the "Fighting France". The battle for Madagascar ended there.

During the operation, British forces lost approximately 150 killed, 300 wounded, and almost 500 more suffered from malaria. The Royal Navy lost 1 Flower-class corvette and 1 tanker, and the only battleship was damaged. The losses on the part of the Vichy army were greater: up to 300 people killed, 700 wounded and several hundred sick. All more or less large ships and submarines were destroyed. Japan also suffered losses: 2 midget submarines and 4 people. 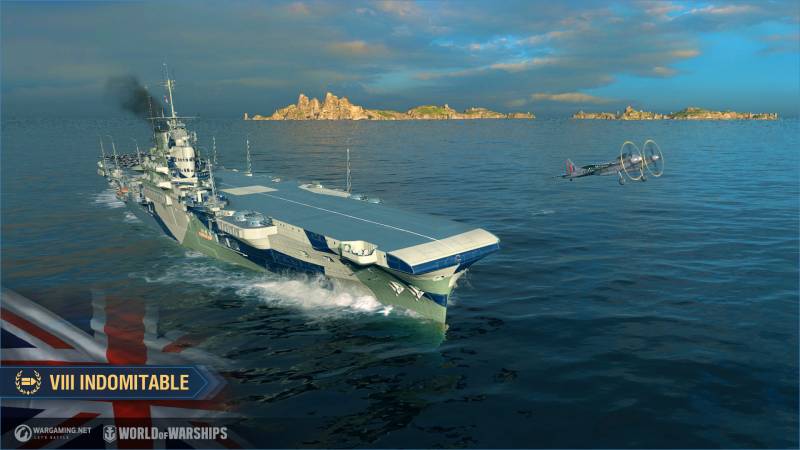 Game model of the aircraft carrier HMS Indomitable
Thanks to the successful operation, the possibility of using Madagascar as a base for the Japanese fleet was eliminated. Naval communications in the Indian Ocean became more secure, which made it possible to improve the supply of the British army in North Africa.

Overall, Operation Battleship became one of the largest successful Allied amphibious assault operations. She showed the possibility of interaction between sea, air and ground forces. The experience of successful interaction of three different types of troops was subsequently used in other amphibious operations.

For the Japanese, the experience of using mini-submarines was not the first. So, five boats of this type were used by them in the attack on Pearl Harbor in 1941. The chronicle of this famous battle is reviewed in the documentary series "Sea Legends" from Wargaming. Happy viewing!