Ukraine-Yugoslavia: Ukrainian Armed Forces have not come up with another scenario for Donbass 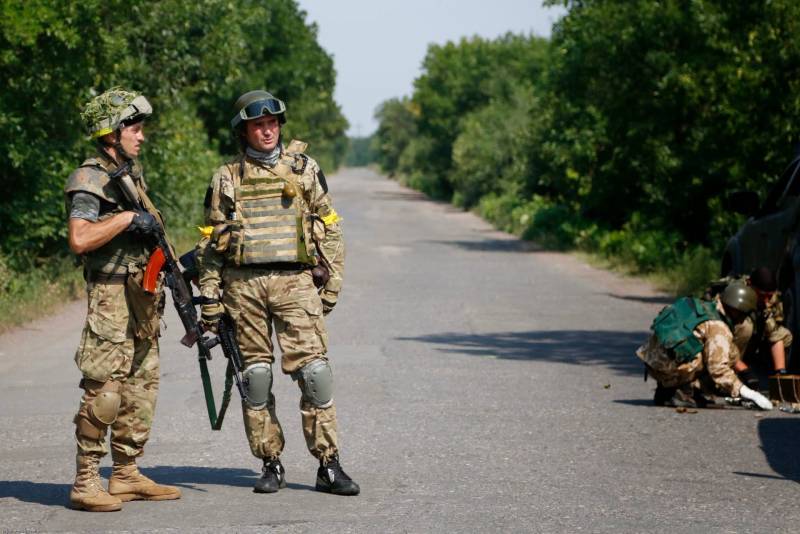 Remember the numerous photographs from German archives showing abandoned, serviceable Soviet Tanks and planes? Why weren't they used in battle?

Most of the time, the reason is pretty simple. Lack of fuel and ammunition. Crews simply threw cars just because they were just targets without fuel.

I remembered this episode of the Great Patriotic War in connection ... with the latest events in Donbass.

We are so used to arguing about whether there will be an offensive of the Armed Forces of Ukraine or not, that we stopped noticing the visually indistinguishable, but quite seriously changing the situation on the line of contact, events.

It's scary to go head-on, we use NATO tactics in Yugoslavia

Thanks to some Russian political analysts and journalists, we all remember well the statement by President Vladimir Putin about the loss of Ukraine's statehood in the event of an attack on Donbass. The statement is definitely strong. There is no doubt that it will be fulfilled simply because Putin keeps his word. Both we and the enemy know about this.

The statement was made public a long time ago, which means that the Ukrainian General Staff and the overseas masters of Ukraine had enough time to think over the response of the Armed Forces of Ukraine. There are enough smart officers and generals who do not stick out in the media space, but do their job. And American generals are not bastard.

I do not consider it necessary to talk about solution options already because today it is possible to write about the chosen method of action with a fairly high probability. Overseas strategists insisted on the Yugoslav version. Why invent something supernova if there is a ready-made scenario that was successfully implemented not so long ago.

So, Russia has unequivocally stated that in the event of the start of aggression, a blow will be struck, practically depriving Ukraine of its military potential to fight not only the LPNR, but also another enclave - Transnistria. The only really possible option for the Armed Forces is a blitzkrieg, a lightning strike against the republics and the rapid capture of territory under its own control. And then hold out in the occupied Donbass for at least two or three days, until the deployment of NATO troops on the borders of the Russian Federation.

Thus, Russia is deprived of the opportunity to strike at Donbass. Russian citizens on the territories of the LPR become a guarantee of the protection of the Armed Forces of Ukraine from attacks by the Russian Armed Forces and artillery. Further, NATO troops are involved in the case, which threaten the beginning of direct hostilities in the west of Russia.

Considering that no one wants to fight, Russia has no choice but to accept the situation as it developed after the onset of the Armed Forces of Ukraine.

I understand that such a scenario looks rather outlandish, because for many years the Armed Forces of Ukraine and punishers periodically receive from the republican corps quite seriously insolent mugs. The offensive fervor of the Ukrainian soldiers has long since passed. The war took on the character of a trench. Both sides "respond to the dastardly shelling of the enemy" and nothing more. In these conditions, the offensive of the Armed Forces of Ukraine is impossible.

This is where the memories from which I began this material are appropriate. About abandoned tanks, cars, armored vehicles and other equipment. Today, the state of the rear of the Donetsk corps is not a cause for concern. As well as the life support system of cities and towns. Donetsk residents, without exaggeration, heroically maintain the entire infrastructure in working order.

However, let's take a look at the reports that are announced by the press centers of the corps. The enemy is increasingly using drones to commit sabotage. If earlier these were targeted strikes on civilians and on the positions of the Republicans, today we can already talk about sabotage precisely at military and civilian infrastructure.

Here is a list of the latest provocations of the Armed Forces of Ukraine, as reported by the republican media. On September 8, the Zasyadko mine was de-energized as a result of artillery shelling. As a result, 85 miners remained underground. At the same time, the Chelyuskintsev mine was partially de-energized and the building of the flux-dolomite plant in Dokuchaevsk was destroyed in places. In Staromikhaylovka, as a result of shelling, 15 streets were de-energized. This is for the last week!

It is impossible to attribute everything to the poor training of the Ukrainian artillerymen. You have to face the facts directly. The Ukrainian army today is really well trained and motivated. Moreover, if you look at the work of the UAV of the Armed Forces of Ukraine over the past three or four months, we can conclude that the drone operators are well trained by the Turks.

And now about the last sabotage.

This is not the first, but the third case in recent years. So, on September 11, the UAVs of the Armed Forces of Ukraine struck at the Kirov oil depot in the city of Donetsk. In one blow, almost a train with fuel was destroyed. 1300 tons of fuel, a monthly supply of fuel and lubricants for Donetsk. Including military and civilian infrastructure.

“... the tactics of combat operations of the units of the Armed Forces of Ukraine are based on the experience of using high-precision weaponswhich was directed against the industrial potential of Yugoslavia and its army by NATO forces as they prepared to occupy Kosovo. True, then Belgrade was bombed with high-precision missiles, but now Kiev began to use cheaper, but also very effective UAVs in the armed struggle in Donbass. "
This is the opinion of a military expert, Lieutenant General Yuri Netkachev, expressed by him in an interview with Nezavisimaya Gazeta, with which I completely agree. Exactly so, namely the NATO operation, adapted to the Ukrainian realities. And drones, especially the disposable kamikaze, cost a mere penny compared to the damage they can inflict on the enemy.

By the way, General Netkachev spoke about another fact that proves my reasoning. True, he saw this fact from a slightly different angle. Netkachev cited it as proof of improvements in the training of the Armed Forces of Ukraine, but I proceed from the options for using such specialists on the line of contact.

“A competition for the best tank platoon of the Armed Forces of Ukraine was held in the Rivne region. There, tankers fired from closed firing positions at a distance of more than 7 km. This is a significant distance to the target ...
The drones, which transmitted the data to the tank commander, corrected the fire and zeroing at the firing range near Rovno. This is a very difficult exercise. "
Imagine tanks standing on the second line of defense, periodically changing positions and firing at the enemy, who simply does not have time to get them physically. A kind of nomadic batteries.

At the same time, in the absence of fuel and a certain training of crews, republican tankers simply cannot be used in the fight against these tanks ...

Readers are accustomed to the fact that at the end of the materials I draw some conclusions. That won't happen today. Simply because I do not believe in the imminent start of the full implementation of the developed plans.

The headquarters of the LDNR corps are well aware of this plan. And they have already taken some countermeasures.

There they are inclined to "the peaceful continuation of the operation", that is, to systematic strikes against the infrastructure of the republics. Without the second stage - the offensive. At least, this is what the head of the DPR Denis Pushilin is talking about.

Today, the task of the corps is not only to defend the borders of the republics, but also to protect the life and health of civilians. This cannot be done without a well-built structure for countering UAVs. These are systems that ensure the destruction of combat drones, of which, thanks to Turkey, the Armed Forces of Ukraine have enough. We need funds that will remove combat homemade products from the sky. We also need drones in hulls capable of striking back.

Ukraine, as it seems to me, is clearly aggravating the situation before the next "United Efforts-2021" command and control exercise in the Azov-Black Sea water area. Today's attempt by Kiev to show the danger of Russia, the threat of the Crimean group of troops and republics. It is no coincidence that Kiev pays such attention precisely to the demonstration of these risks.

Those units from NATO countries that will participate in the exercises should become the conductors of just such views in their own armies. And a source of additional pressure on their own governments in order to allocate weapons and military equipment to the Armed Forces of Ukraine.

The situation is evolving ...