A submachine gun for military pilots of the Russian Aerospace Forces 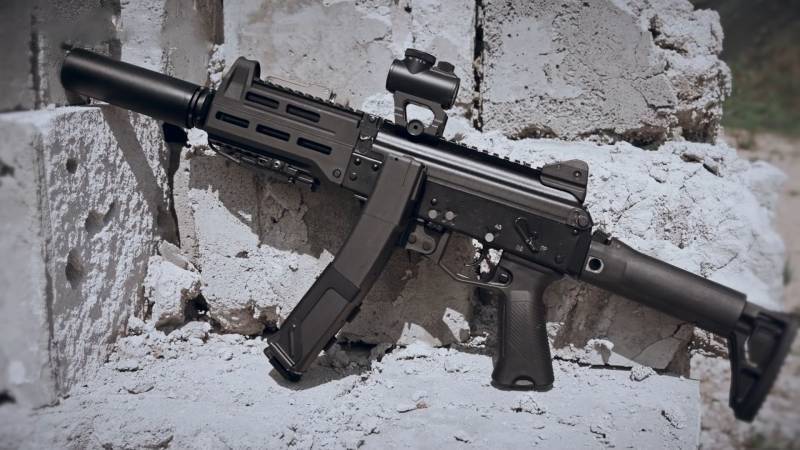 The military conflict in Syria showed the vulnerability of downed pilots in a ground collision with the enemy. After the death of Russian pilots Oleg Peshkov and Roman Filippov, the Kalashnikov was tasked with developing a modern compact automatic weapon, which could equip the pilots of the Russian Aerospace Forces.

The novelty is a version of the new Kalashnikov PPK-20 submachine gun, modified in accordance with the instructions of the Minister of Defense Sergei Shoigu. The Russian Defense Minister gave his recommendations on the finalization of weapons in the framework of the previous international military-technical forum "Army-2020". As noted in the Kalashnikov company, the modified version of the PPK-20 is suitable for placement in the NAZ - a portable emergency reserve of military pilots.

In addition to the new version of the PPK-20 submachine gun, which does not yet have an official name (unofficial designation PPK-20U), Russian military pilots were offered to include in the NAZ kit another Kalashnikov development - the Lebedev PLC compact pistol. In addition to a submachine gun and a PLC, a new unloading vest with a set of defensive grenades may also be included in the wearable emergency stock of military pilots.

Evolution of the Vityaz submachine gun

The novelty of the Izhevsk gunsmiths is a further evolution of the Vityaz submachine gun.

The group of designer Viktor Mikhailovich Kalashnikov, the son of Mikhail Timofeevich Kalashnikov, was responsible for the development of the weapon. Viktor Kalashnikov developed a line of submachine guns "Bizon-2" for various ammunition, including the version "Bizon-2-01" chambered for 9x19 mm. This development was later used as a base for the Vityaz submachine gun, which was equipped with a box magazine for 30 rounds.

In 2005, the modified Vityaz-SN submachine gun was officially adopted by the Russian Ministry of Internal Affairs. Currently, this model of small arms is in service with special forces of various Russian law enforcement agencies, including the FSB and the FSO. 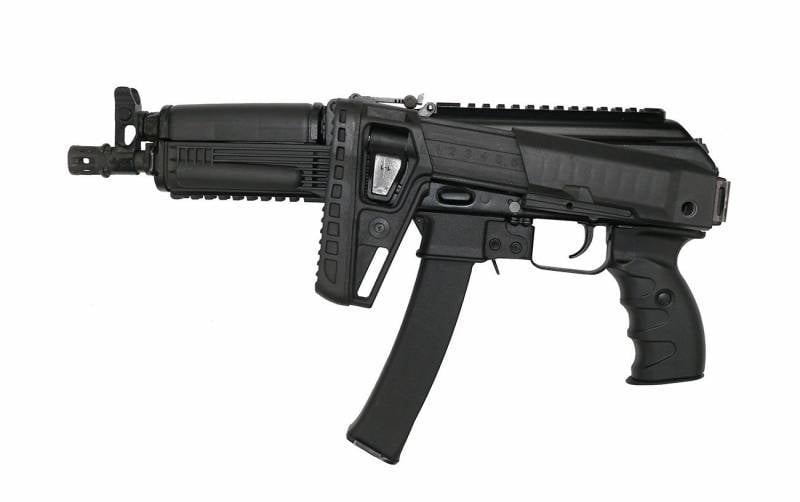 PPK-20 submachine gun shown by Kalashnikov in 2020, photo: kalashnikovgroup.ru
It was on the basis of the Vityaz-SN model in Izhevsk that the PPK-20 model (Kalashnikov submachine gun of the 2020 model) was developed. In the course of the work, the designers took into account all the comments that were revealed during the operation of the serial "Vityaz-SN". The novelty was named PPK-20 to perpetuate the memory of the designer Viktor Kalashnikov, who passed away in 2018.

The new model of a submachine gun, according to Kalashnikov, will be able to interest not only military pilots. It would be too expensive to make weapons exclusively for one category of military personnel. The updated version of the PPK-20, due to its high firepower and compactness, can be suitable for arming special forces soldiers, as well as crews of various combat vehicles and support units in need of automatic small-sized weapons.

Kalashnikov believes that the weapon has good export potential and will be competitive in the PDW (Personal defense weapon) niche - personal self-defense weapons. The effectiveness of weapons for soldiers of special forces is determined by the possibility of using them in confined spaces, in transport, as well as in dense urban areas and in crowded environments.

Kalashnikov has already talked about some of the features of the new submachine gun for military pilots. The length of the model with the stock folded will be only 41 centimeters. This was achieved, among other things, by reducing the length of the barrel of the weapon. Experts note that the model received a shortened barrel. 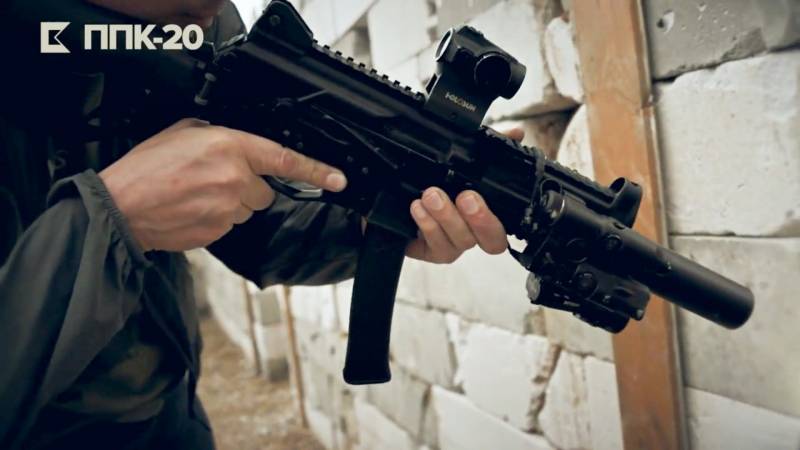 Updated PPK-20 in tactical body kit, frame from video kalashnikov.media
Experts refer to the important features of the model as the fact that the butt, adjustable in length, folds to the right side of the weapon. This has a positive effect on compactness. The size of the weapon is reduced in width, for the model that will be included in the NAZ, this is very important. This is achieved due to the fact that when the butt is folded to the right, the loading handle does not go beyond the dimensions of the butt.

Together with the new submachine gun, 7N21 cartridges can be used. This is a 9x19 mm cartridge equipped with a steel core bullet. The bullet weighs 5,4 grams. At a distance of 55 meters, a similar bullet is able to pierce a 4 mm steel plate.

Kalashnikov claims that the tests carried out at the enterprise showed that the use of this cartridge with an initial bullet velocity of approximately 470 m / s ensures penetration of body armor of protection class 3A (according to the NIJ standard). The range of a direct shot from a weapon is 360 meters, the aiming range is up to 200 meters.

The submachine gun is equipped with box magazines for 30 rounds, the total length of the weapon is 700 mm. The weight of the model without cartridges appears to be in the range of 2,5 to 3 kg. The model received a translator of fire modes, which at the same time also performs the function of a fuse. The manufacturer emphasizes that the new mechanism allows you to comfortably use the weapon using both the right and left hands. In this case, all manipulations with the weapon can be carried out without taking your hand off the pistol grip.

The model is initially equipped with Picatinny rail, both on the forend and on top of the receiver. There is a single long Picatinny rail on the cover of the receiver and on the forend, which allows you to place more additional equipment. The sights of the model have also undergone changes. The updated PPK-20 received a new front sight and a diopter rear sight similar to the AK-12. In addition, the aiming line has been lengthened, which should positively affect the accuracy of the model.

Russian publications, including TASS, previously reported that the new version of the PPK-20 had passed state tests. This was also reported by the official website of the Kalashnikov group of companies.

According to Denis Fisenko, who holds the post of Kalashnikov's director for special projects, the weapon has been successfully tested and adapted to the portable emergency stock of military pilots, it can be placed in the cockpit of combat aircraft. 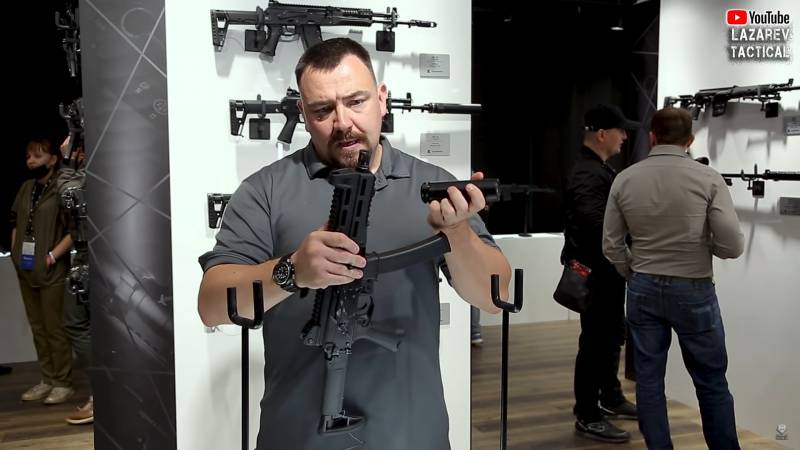 The updated PPK-20 without a silent firing device, a frame from the video Lazarev Tactical
Kalashnikov notes that the tests carried out in Akhtubinsk at the state flight test center of the Russian Defense Ministry confirmed the possibility of placing a new version of the PPK-20 in the pilot's ejection seat.

At the beginning of September 2021, information appeared in Rossiyskaya Gazeta that the command of the Russian Aerospace Forces decided to include a new version of the PPK-20 submachine gun under the 9x19 mm Parabellum cartridge in the NAZ of military pilots.

It is reported that the submachine gun will be part of a wearable emergency stock with an unfastened magazine, a folded stock and without devices for silent and flameless shooting to reduce the length of the weapon. Stores and a device for silent and flameless firing can be placed in the body unloading of a pilot of a new type. Quick-detachable silent firing device.

It is expected that the NAZ with the Kalashnikov submachine gun will be given to pilots of fighter, bomber and assault aviation... Pilots must take such a kit with them on combat missions. In the event of a bailout and landing in enemy-occupied territory, the NAZ must help the pilots save their lives.

In addition to weapons, a knife, a first-aid kit, a food ration, communications equipment and other items that are necessary for the survival and autonomous existence of a soldier for some time are traditionally included in a wearable emergency stock.