As we can see from the example of one Donbass village, cholera and typhus are annual and regular guests, and not only in the south, where accelerated industrialization and urbanization created conditions for the development of any infection, in more traditional provinces it was no better:

The cholera epidemic that has gripped almost the entire Oryol province begins, as the provincial government notes, in which the whole matter of combating this most fierce enemy of man is concentrated, is weakening in almost all districts. Although, however, the future is still dark and now, it may be still premature to squander your hopes for the best, since this phenomenon at the moment is a simple routine.
And not only there.

Only the sixth cholera pandemic lasted intermittently from 1899 to 1923 throughout the Russian Empire. The number six is ​​just evidence that there have been five previous pandemics. And they were fierce - the first cholera pandemic broke out in 1817, it was then in Russia that the first cases were recorded in Astrakhan. During the third pandemic of 1837-1851, almost 700 people died in Russia alone.

In 1848, 60-100 soldiers perished from cholera in the Russian army of Field Marshal Paskevich in Galicia every day. In the Russian Empire then, according to official data, 1 people fell ill, 772 died. Several waves of cholera were observed until 439.
There were seven pandemics in total (the last one stands alone, the middle of the XNUMXth century), they all came out of India, collected huge victims and forced humanity to dramatically change their habits and lifestyle.

There was no particular choice, the disease spread to the most remote corners of the planet, except, of course, Antarctica.

Already during the third pandemic, the first international sanitary conference of 12 countries was held, and the rapid development of medicine and utilities began.

They are, in fact, on the surface.

In the XNUMXth century, the processes of the Industrial Revolution and urbanization began abruptly, international trade was established and developed, and numerous colonial wars took place. The first causes an explosive growth in the population of cities, with a complete lack of planning, sewerage and normal waste collection, plus a shortage of sources of drinking water, the second provokes the rapid movement of goods and people around the planet. The era of coal and steam has brought humanity not only good, but also a pandemic, a century long with millions of victims.

The next reason is colonies.

Another is wars. Descriptions of almost any war of this period abound not only in the number of victims of bullets and shells, but also in the number of victims of gastrointestinal infections. Moreover, infections often killed more than the enemy. And then, at the end of the wars, the soldiers returned home, bringing with them not only awards and scars, but also Vibrio cholerae.

Another reason is crowding.

The era that can rightfully be called the era of tightness. Armies are growing sharply, with a shortage of barracks, factories and factories are built before housing, and people huddle in barracks without amenities, masses of migrants and pilgrims float on ships across the ocean, at best in small cabins, at worst in holds without normal sanitary conditions ...

It all worked together, and habits, or rather their absence, helped. So, people did not understand that it was necessary to boil water, that one should not drink and cook food on water from reservoirs, that one should not buy ready-made food and drinks on the street from the lotters, that fruits and vegetables should be washed, and meat should be heat-treated ... also understood that personal hygiene is protection. Cholera gave us a modern understanding of the significance of this factor: 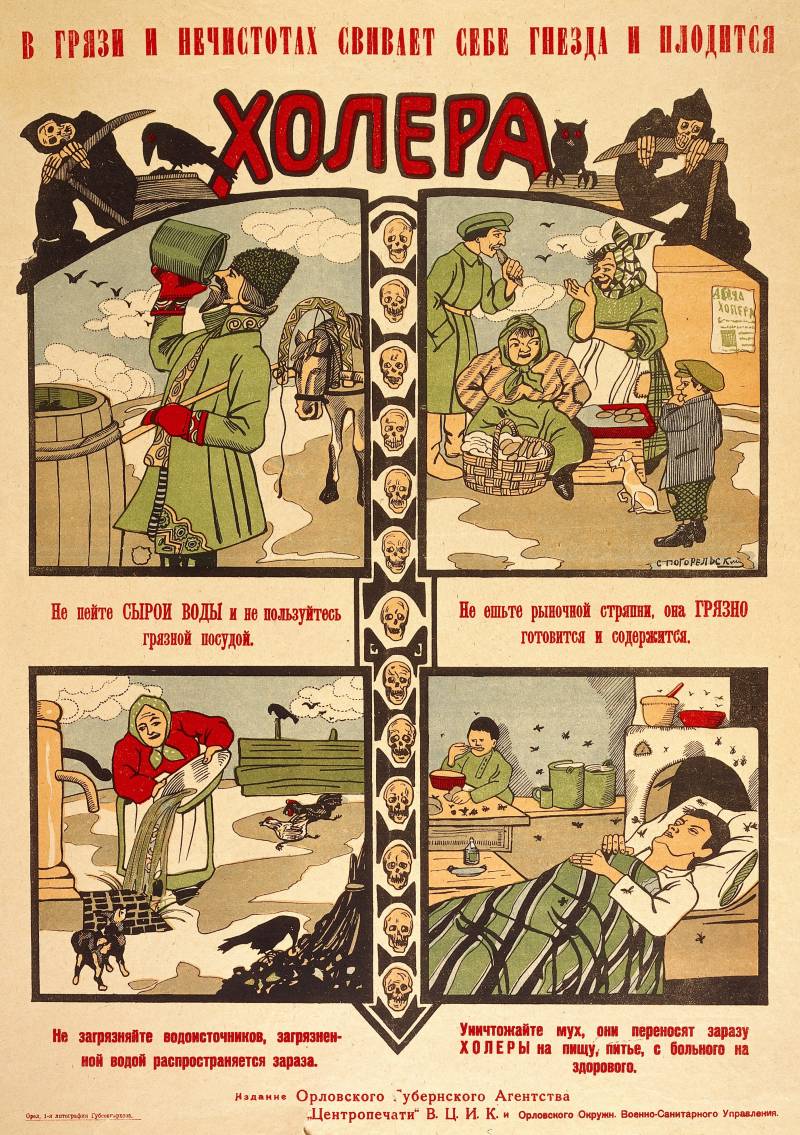 All this had to be learned through the corpses.

We can say that cholera changed the world.

Fear always leads to denial of the problem, it has been so in all centuries, and the XNUMXth century was no exception.

People were afraid, and this fear, given the low literacy, led to rather strange conclusions and decisions. So, in St. Petersburg, rumors circulated that the sick doctors were dumping into a deep hole, in the provinces ... the term "cholera riot" has long been a sad reality.

The events in Tambov in 1830 can serve as an example of such a riot.

At first, the peasants of the village of Nikolskoye wanted to cook the doctor in boiling water (he forced the patients to take a hot bath), then the townspeople began to beat off the patients transported to hospitals. Further more - a rumor spread about the poisoning of wells by local landowners, which was confirmed by the vice-governor (his wife and two children died of cholera within a week).

A crowd of five thousand people captured the governor, smashed the infectious diseases hospital, destroying all laboratories and medicines, they wanted to kill the doctors, but they managed to escape. As a result, three days of riot, 82 tradesmen were subjected to corporal punishment, one of them died, additional troops were stationed in the city, which caused a severe outbreak of cholera with numerous victims.

There were many such stories. And not only in Russia.

Moreover, the range of cholera pandemics is different - Russia basically rebelled in 1830-1831, France in 1817, and Germany, say, was covered in 1893, when Hamburg rebelled.

In addition to riots, there were murders of doctors, refusals to take medications, hiding of patients and violation of quarantine. Moreover, this happened regularly and in all six waves of the pandemic.

A separate outrage was caused by the emerging vaccines: it was not even people who avoided vaccination - governments. So, the Khavkin vaccine, developed in 1892, was approved for use only in India, and in Europe, vaccination was refused for a long time.

Odessa citizen Vladimir Khavkin, a knight of the British Empire, had to push his brainchild (vaccine) literally at the risk of his life: during one of the riots, the crowd wanted to kill him, saved by the fact that the scientist publicly injected himself with the vaccine.

The fight against the epidemic was hampered not so much by the lack of drugs, but by the initially incorrect message itself that the disease is caused by poisonous miasms, and not by some not Vibrio cholerae, which was discovered only in 1854, but stubbornly refused to consider the cause of the pandemic for another 30 years ...

In general, it all came down to prevention:

2. Treatment of water sources with lime.

4. Inspection of passengers of ships.

The final point in cholera pandemics was put only by vaccines, the spread of cleanliness and the streamlining of urban economy, along with mass health education. If the First World War is an outbreak of cholera and gastrointestinal diseases, then the Second World War in this sense was much calmer: humanity has learned some of the basics.

As usual, any disaster pushes humanity forward, the century-old pandemic with millions of corpses was no exception. The proliferation of plumbing, sewerage systems, timely garbage disposal, increased standards of cleanliness of the body and even helping the poor are all consequences of cholera. The same as infectious diseases hospitals, field kitchens in the army, boiling water and constant cleaning of public places.

The city government has shown its activity in a number of measures to clean up the city in a sanitary sense and in the hiring of doctors and disinfectants, as well as in the construction of barracks. The local Red Cross Society has opened a cheap canteen in order to distract poor people from the bazaar, where the homeless often get far from healthy food.
Now all this has become a part of everyday life and has already become second nature to a person, the majority do not even remember why this is so and not otherwise, but at the same time, no one will return to the standards of life of their ancestors at the beginning of the XNUMXth century.

Cholera retreated under the onslaught of purity and doctors.

But it did not go away, every year a couple of cases are registered in Russia.

And we now live with Vibrio cholerae until the end of the centuries, as well as with other diseases that we managed to defeat, but not to destroy.