Birch Kartuzska: the forgotten history of the Polish concentration camp 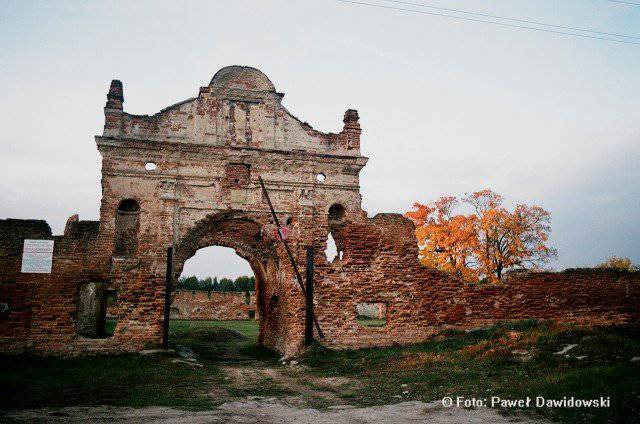 September 1 - a tragic date in Polish stories. On this day in 1939, the German Wehrmacht invaded the territory of the Polish state. Started World War II. Mourning events dedicated to this date are taking place all over Poland, but the zigzags of Polish history make the Poles remember the September 17, the day when Soviet troops entered Poland from the east ...

The Polish campaign of the Red Army lasted 12 days. The German occupation of Poland lasted for several years. Nevertheless, for some reason it is more convenient for Polish society, referring to that time, to angrily condemn Moscow, and not Berlin. The Poles do not want to remember that a year before the Polish army had invaded the Czech Teshin in the same way, annexing it to Poland; that units of the Red Army occupied only non-Polish lands, which were ceded to Warsaw as a result of the unfair Riga Peace Treaty of 1921; that the local population was sometimes mistaken for arbitrary reprisals against Polish officers, putting offenses on them for the long years of pan dominance; that the Polish officers themselves told about the strange behavior of the Soviet troops, who were reluctant to shoot at the Poles and were generally reconciling; that for certain war crimes (looting, robbery) the tribunal punished the Soviet military very strictly, up to the execution. There was a case when Soviet soldiers were sentenced to execution, who shot several captured Poles after a group of prisoners killed a guard and captured weapon, opened fire on the convoy.

Following the memories of the Poles about the arrival of the Red Army in 1939, the Katyn theme follows like a shadow over the body. Estimates of the number of Polish prisoners captured by Red Army soldiers vary from 450 000 to 230 000 people. Be that as it may, but tens of thousands of soldiers of the Polish army — natives of the “Kresov vskhodnykh” were sent home. Many more of them, natives of the “German” part of Poland, were handed over to the German authorities. Of the remaining Polish gendarmes and servicemen in Katyn in the hands of the NKVD, only one out of four found his death. But perhaps the most important thing: many of those who were shot at Katyn were part of the service personnel of the Polish concentration camp Bereza Kartuzska, and this alone cannot but change the view of themselves and their fate.

The Birch Kartuzskaya concentration camp (now the territory of Belarus) appeared in 1934, and up to 1939 there were Jews, Ukrainian nationalists, and Poles opposed to the regime of Jozef Pilsudski. The idea of ​​creating the camp is attributed to the then Prime Minister of Poland Leon Kozlovsky, in the future - a Gestapo agent. He was impressed by Goebbels’s speech on the educational function of concentration camps. J. Pilsudski endorsed the idea (1). It is believed that Birch Kartuzskaya was created on the model of the Nazi concentration camp Dachau. By the way, after the German attack on Poland, L. Kozlovsky ran to the Nazis and, until his death in 1944, received a pension from them, but in 1943, he managed to take part in the discovery of Katyn graves.

Yu. Pilsudski introduced the so-called the regime of “moral reorganization”: censorship of the press was introduced, the president of the country received the right to issue decrees bypassing the parliament, which was completely dependent on his will. The persecution of dissidents began, including Poles, who were massively thrown into the casemates of Birch Kartuzskaya. 17 had to spend even days in a concentration camp even a former associate of U. Pilsudski, the famous Polish publicist Stanislav Matskevich, on charges of “weakening the defense spirit of the Poles” and “systematic criticism of the government by artificially selected arguments”. Here is how he describes his impressions: “I take the opportunity to talk about Birch Kartuzskaya, around which there are so many secrets, because when they released the prisoners they said:“ You will talk, you will find yourself here a second time, and then ... ”... Birch Kartuzskaya was not a place of isolation, but a torture ". Further, he describes Y. Pilsudsky’s faithful friend, Kostek-Bernatsky, who was appointed camp commander: “It was a sick sadist ... He gladly invented all kinds of torture, giving them affectionate names with degenerate pleasure -“ gymnastics ”,“ charter ”. The main torture is the denial of the right to fail. Only once a day, in 4: 15 in the morning, the prisoners were taken out and commanded: "One, two, three, three and a half, four!" In these one and a half seconds, everything should be finished. "

According to the stories of S. Mackiewicz, the prisoners were fed disgusting bread, which did not contribute to easy digestion. With crowded stomachs, people were forced to do “gymnastics” - to sit in a deep squat with their hands up for 7 hours! The squat, run, walk, descend the stairs and climb back. At the same time, blow after blow fell on the prisoners, especially if someone's stomach could not stand it. The neighbor of S. Mackiewicz on the bunk, a Jew, received in the sitting position 280 sticks at once from seven gendarmes. S. Mackiewicz cites this Jew's story about how the prisoners were put on their knees on sharp pebbles and forced to move forward under a hail of stick blows, and then every 20 meters were forced to kiss these sticks.

“People from all over Poland gathered people who adored to beat unarmed ... The criminals were appointed by the barracks on duty, they monitored the implementation of the“ gymnastics ”... They were allowed to beat the rest of the prisoners,” writes S. Matskevich. Prisoners were not allowed to talk during the day. Violators were expected for six days by a punishment cell on cold concrete, with windows open in winter, without shoes, only in pants and a shirt. Every day the guilty were deprived of half the ration, and every second day they were not allowed to eat at all. Every half hour, those in the punishment cell were obliged to humiliatingly report through the window: “Pan commander, I report to you obediently.”

In the barracks, prisoners were deprived of sleep. They were woken up at night every half hour, forced to run, jump, crawl, in order to then again forget themselves in a heavy drowsiness on 30 minutes. Prisoners were often forced to crawl and fall in the latrines, right into the impurities. Washing after that was forbidden. It was also forbidden to wash dishes to prisoners.

In Birch Kartuzskaya could please even for tax evasion. S. Matskevich describes several such prisoners, wealthy merchants of old age. Some of them are crazy. In a concentration camp, everything had to be done at a run, and even cripples were forced to run with bones broken as a result of torture, patients with tuberculosis, arthritis, hypertension. Prisoners were not even allowed to pray and wear crosses around their necks. They were also beaten for this. “Everything looked like Dante’s hell,” concludes S. Matskevich. Epilepsy, mental seizures, sudden death were a daily practice in Birch Kartuzskaya. Even blind prisoners were not released from the dungeons. They were forced to run and jump along with everyone, beating them if they lost their way (2).

The only free day was Sunday. On this day, the prisoners were obliged to devote half an hour of lecture about the leader Y. Pilsudski and use the library, filled with books by Y. Pilsudski. There was no medical care and only in extreme, almost fatal cases were prisoners engaged by doctors (3).

In 1939, the concentration camp prisoners were liberated by the Red Army, whose arrival they greeted with glee. The camp guards fled. Ended torture, bullying and humiliation.

But the questions remain. Why is the Katyn shooting in Poland considered an act of "genocide", and the killing and shooting of Soviet prisoners of war in Polish camps in 1920-s and the Orthodox people in Birz Kartuzskaya - not? For barbed wire in interwar Poland, it was possible to please just because you are Orthodox. In this way, the famous Ukrainian Orthodox theologian and historian Mikhail Petrovich Kobrin got into Birch Kartuzskaya.

By the way, among the Poles who were shot at Katyn were a considerable number of gendarmes and jailers (those who tortured prisoners in Polish dungeons), as well as besiegers - Polish immigrants, participants of the Soviet-Polish war 1919-1920, who were settled by the government of U Pilsudski on the occupied lands of Western Ukraine and Western Belarus. Osadniki, as the politically and economically dominant element, were to polonize and nourish the local population. More than 300 000 precipitators settled in the western Belarusian lands only, and thousands of hectares of seized Belarusian land were taken over by them.

Why are the monuments to Stalin and Dzerzhinsky considered to be the symbols of tyranny by the Poles, and the monuments to Pilsudski, which the whole of Poland is forced to, do not belong to this category?

Why are songs about Stalin's falcons and Voroshilov's arrows being branded as an act of Soviet propaganda in song art, and the song of the Legionnaires of Pilsudski “My, pierwsza brygada” (“We are the first brigade”), where there are lines “And with us was our dear Leader!” ( the word "leader" - with a capital letter), not only is not considered a symbol of Polish expansionism, but turned into the official anthem of the Polish armed forces?

There are many such “why”. The Polish side seems to be unable to give only clear answers to them.