And again "Armata" on the waves? 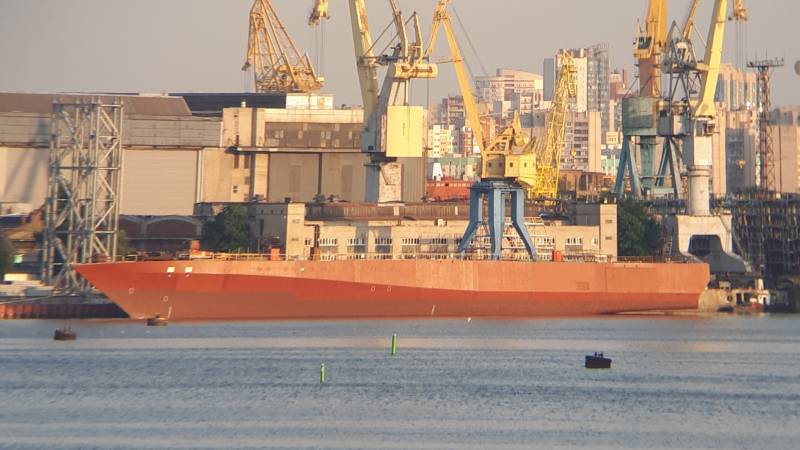 In principle, these ships have already been spoken about on our pages, and said very fiercely by Klimov and Timokhin. Actually, actually sharing the essence (but not the intensity of passions) of the articles, I would like to focus on several other things. Which is reasonable, since everyone looks at the problem from their side.


Project 22386 has been criticized for a long time. And, I must say, rightly so. If you take and read all the critical articles, you get the impression that the manual fleet generally have a poor idea of ​​what the fleet needs. And around this unfortunate project 22386, and in general, so many copies have already been broken that you can build a clipper.

And now a new portion of diesel fuel for the fire is already quite well blazing. And none other than the well-known Alexei Rakhmanov, the general director of USC, the United Shipbuilding Corporation, splashed. He said in an interview with Interfax that the project 22386 ship could become an experimental ship and not be part of the Russian Navy at all.

Somehow you know, in the style of the unforgettable Viktor Stepanovich Chernomyrdin, right? It is clear that if the project is completed to the corvette, then it will become a warship. And if it becomes an experimental vessel, then it will not be a combat one.

The only thing that is not entirely clear is what the ship under construction will become. In general, earlier Rakhmanov spoke very positively about the corvette project, talking about the fact that USC owns the technology and is provided with materials for the production of stealth ships.

However, now we can safely say that everything began as usual in Russia. With very loud statements and promises. And the same Rakhmanov said that the USC had completely mastered the stealth technology and the 22386 corvette would be built on the model and likeness of the American Zamvolt, not for the night mentioned.

About how "Zamvolt" could become a reference ship, a separate conversation. But in this, perhaps, one can argue with Rakhmanov, and, moreover, reasonedly.

The destroyer with a displacement of 15 656 tons and a length of 190 m has an effective dispersion area, like a small fishing seiner. This is, of course, an achievement that cannot be overlooked. However, the cost of the ships turned out to be simply incredible. $ 22,5 billion to build three ships is a lot. Insanely many. And if you consider that after, with the start of operation, problems fell like rats from a sinking ship, it is no wonder that the construction of subsequent ships was frozen.

And until now, the command of the US Navy cannot really figure out how to use these ships.

Much has been said about the technologies on the basis of which ship hulls are built. The Sredne-Nevsky shipyard specializes in the production of plastic mine action ships, and therefore the technologies for 20386 are appropriate.

As stated, the project 22386 was supposed to receive the latest radio-absorbing coating, as a result of which a ship with a length of 100 meters would have to reflect the radio signal like a small boat.

And the first corvette was supposed to be built by 2022, having laid down in 2016. 6 years to build such a ship - probably, it is quite difficult to build. In the United States, for example, it took three years for a Nimitz-class aircraft carrier.

And they showed the corvette model back in 2015, of course, at the forum. More precisely, at the International Maritime Defense Show in St. Petersburg.

The ship is not small. Length 109 meters, displacement 3400 tons. The maximum speed according to the project is 30 knots. In theory, there should have been innovations, befitting the newest ship built in the 21st century.

However, from the very beginning, even the model surprised the specialists. Especially the armament layout.

Yes, they do not practice placing artillery pieces behind launchers in the world. Project 22386 has a 100-mm gun for some reason located behind the Redut launcher.

So much has already been said on this score that it is simply not worth repeating. Further. The installation of the Uranus anti-ship missile system, we note, is by no means the most modern - nonsense.

ZRAK "Kortik" and two 30-mm AK-630 assault rifles are also not the best protection. But it's better than nothing, because with Redoubt everything doesn't look very nice so far. But AK-630s are at least useful if you need to shoot some small target such as a pirate boat. Another question - what did the pirate boat forget in the waters of the Black or Baltic Sea, or the Arctic Ocean?

Helicopter hangar, it is also a warehouse for replaceable modular equipment. Yes, Project 22386 was created in the era when everyone was looking at the American littoral ships Freedom and Independence, and some were touched by the advanced modular weapons scheme.

And these some decided that the new Russian ship should also have everything like the Americans. Modular and replaceable.

Meanwhile, the Americans really suffered with their littorals and their removable containers for almost 20 years and, as you know, abandoned this interesting but difficult task. And the modular ships of the coastal zone are slowly being decommissioned and removed from the fleet.

And we have? And for starters, we do not have modular weapons, with the exception of the Club-K complex. Export version of "Caliber". What to change these modules to is one of the good questions.

Of course, given that a 3-ton boat is being built twice as slow as a huge trough with more than 100 tonnes (“we are talking about Nimitz”), then yes, something could be invented during this time.

But is it worth it to invent this modular-container weapon, if those who invented it have already begun to abandon it?

Further with the weapons, too, everything is not very good. Corvette one of the main tasks has the task of finding and destroying enemy submarines. For this, the ships must have a sonar station and an anti-submarine helicopter. These two components are the minimum search kit for causing maximum trouble to the submarine.

On the corvette 22386 there is an option for the placement of launchers of the "Packet-NK" complex. There is no clear data on how and where the hydroacoustic station will be located, providing data for "Package-NK". But there is information that the sonar station "Minotaur" or "Vignette" can be used on the ship.

A towed station is not bad. If the power plant allows. And it just does not allow to properly tow the GAS, because on Project 22386 they decided to bungle a very peculiar power plant. The economical and exploratory move, as conceived by the authors, should be provided by two ADR-1600V electric motors with a total power of 4 hp. This is not enough to tow the Minotaur at the proper speed.

Of course, no one canceled the work under the M90FR either. But the question arises of the need for these low-power electric motors, unable to give the ship the required speed.

The Ka-27PL helicopter, of course, will be called a new technique only by the most inveterate optimist. But even this car cannot get permanent registration on board. There are difficulties with the operation of the under-deck hangar for the helicopter.

In general, it seems like a new ship, with a bunch of new technological solutions. But - they were not ready. All these unworked decisions have caused and continue to cause delays in the completion of the ship.

And the price of the ship continues to rise. To date, Project 22386 has already bypassed the project 22385 "Thundering" ship, which, according to experts, is much better armed and equipped. "Thundering" cost the treasury 22,5 billion rubles, and the cost of bringing to mind pr.22386 is estimated at 40 billion rubles.

As a result, the ship was pushed out of the shipyard and now reflections in the "Zamwolt" style begin. It is already clear that such an expensive ship is not needed in the series. And from here was born the decision to transfer him to an experimental vessel.

Why did it happen that way? Many say that Project 22386 became hostage to the exorbitant ambitions of its creator, the famous shipbuilding theorist, Professor Igor Zakharov. It so happened that at the end of his career, Igor Grigorievich found himself in the chair of the vice-president of the USC. And the former commander-in-chief of the Navy, Viktor Chirkov (a big fan of American modular ships), became the main adviser to the president of the USC.

As a result, this ship appeared. Absolutely incapacitated, copying essentially American ships, which were recognized as unsuccessful and, apparently, will be withdrawn from the fleet.

It is difficult to say whether this ship, which received the name "Mercury" in honor of the heroic brig, will be brought up to standard. On the one hand, the "godfather", one might say, was Putin, so the process of injecting funds can continue. With roughly the same chances of success.

It is possible that the transfer of "Mercury" to an experimental vessel will save some of the spent 30 billion rubles. Some, because no experiments and tests can recoup such costs.

The American Zamwalt turned out to be a completely impractical and expensive ship. And now three built destroyers await the decision of their fate. To all appearances, his Russian follower (and some hastened to christen Project 22386 the Russian "Zamvolt") is expecting about the same fate: having digested the budget, he will be quietly and ingloriously written off.

Not everything that is conceived in the United States can be enthusiastically copied.