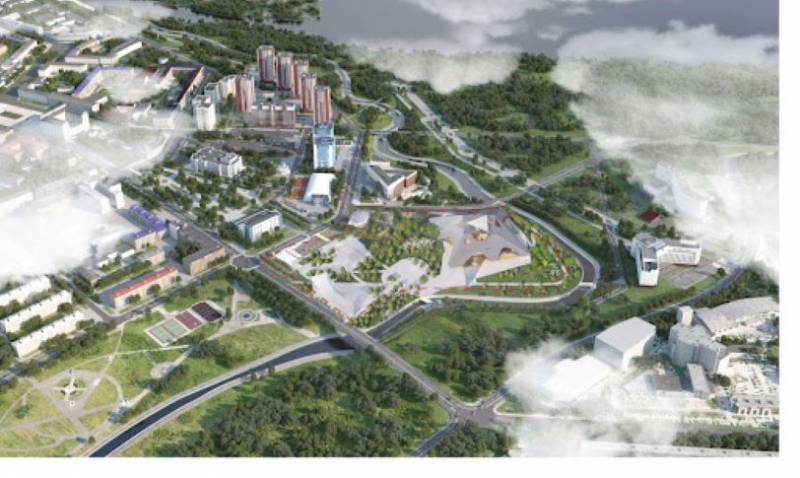 The idea of ​​developing the Siberian expanses on the basis of the creation of scientific and industrial centers, voiced by the Minister of Defense of the Russian Federation Sergei Shoigu, sounds bright. But with a detailed analysis, the question arises - does an extraordinary initiative have real prospects?

Siberia will grow by cities! One would like to alter the famous saying of Mikhail Lomonosov. The leader of the United Russia list, Russian Defense Minister Sergei Shoigu, announced a large-scale project for the new development of the expanses of Siberia and the Far East.

Its zest is the construction from scratch of several large cities, scientific and industrial centers with a population of 300-500 thousand, and better - up to a million people. The accompanying line is the construction of transport infrastructure, which will additionally connect the West and the East of the country. Moreover, the leader of "Edra" believes that the capital of Russia should also be moved to Siberia.

You can understand Sergei Kuzhugetovich - he comes from Siberia, the taiga is his home, he understands and feels it. In addition, the situation obliges - elections are on the way, people's confidence in the "leading" party is at a minimum, its rating is frankly low. Of course, it is possible to draw the numbers during the voting. But how to live on - the problems roll in a shaft. 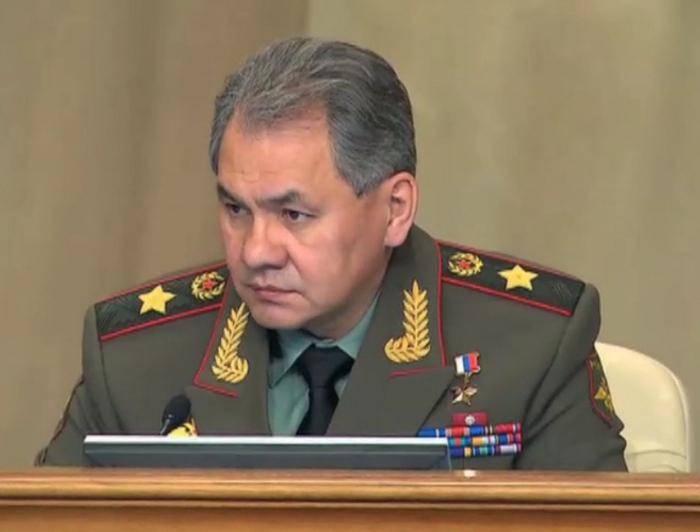 Photo: mil.ru
And here the prospect is clearly visible - the spaces are huge, the territory definitely has resources and potential. After all, the state has voiced calls to go to the East before. The development of virgin lands, the construction of the BAM are global projects, which, despite certain problems and shortcomings, were nevertheless implemented.

Citizens actively responded to the country's appeal - they really went to new jobs: some for dreams, some for love, some for a “long ruble”. But the main thing here was that it was the state that was responsible for financing and creating all the necessary infrastructure for projects. The State Planning Commission system, the five-year plans really worked.

What about now? Planning, as a government approach, has sunk into oblivion. The country's modern economy is based on the interests of certain business groups that operate with the main volumes of finance in the country. The state also has money, but the liberal paradigm stifles any strategic approach.

Look at how persistently the privatization of highways, including federal ones, is going on. They did not want to make the Central Ring Road a public highway, on the Minsk highway they quietly snatched a piece of the highway, turning it into a private business. The strategic road to the south - M4 "Don" is all in business barriers. In other words, after voicing a bright idea about Siberian cities, the question immediately arises - at whose expense will this banquet be? 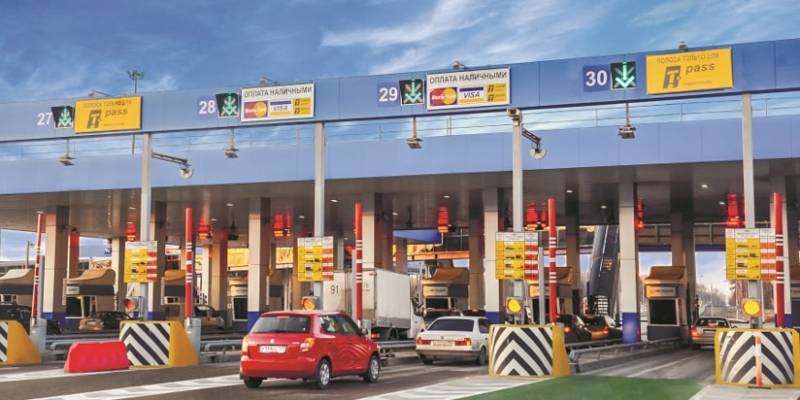 Very serious things have been declared. Sergei Shoigu says that this is not just about the construction of new settlements in the taiga, but about the development of Siberian macroregions. According to him, new scientific, industrial and economic centers should become

"New poles of attraction, both for the population of all of Russia, and for our numerous compatriots in the CIS countries and far abroad."
Want to be specific? An industrial center "Copper and Electrical Engineering" can be created between Bratsk and Krasnoyarsk, in the same area it is possible to create an "Aluminum Valley", focused on the production of high value added products from aluminum. In southern Siberia, it is possible to organize the extraction and processing of coking coal, near Kansk - to establish coal-chemical production of plastics. The Forest and Building Materials cluster can be created near Lesosibirsk.

All this smells strongly of rhetoric that was widespread in the USSR in the 70s of last year: about territorial production complexes, an associated settlement system, about the location of productive forces and an industrial base as the basis of development. But now it just doesn't work, the basis of the economy is completely different.

In the USSR, new satellite cities and industrial centers were created without looking back at anyone, let alone external competition. The country strove to create a complete set of industries necessary for the national economy.

Modern Russia, on the other hand, has gone crookedly and obliquely into a post-industrial format. This does not mean that it will abandon industrial production, but it will no longer rank them as priorities. The time is different.

Shoigu's formula, in principle, can work, but in the presence of several factors at once. A clear motivation, the availability of human and financial resources, and whatever one may say, a favorable situation in the world markets - the manufactured products must be exported somewhere.

The Minister of Defense spoke about the motivation in sufficient detail.

“Conditions for people living in Siberia should be completely different. After all, why did the idea of ​​building new cities, new agglomerations arise? Because modern cities need proper zoning. Instead of dirty industrial zones and endless traffic jams, there should be well-planned spaces - both for work and for recreation, and at the same time ensuring mobility, ”Shoigu said.
In other words, people should go for new apartments in cozy areas, career prospects and the wonderful nature of Siberia. This may also include preferential mortgages, tax preferences for businesses and a few more "goodies".

Yes, they forgot about the ravines ...

But according to experts, primarily economic geographers, motivation can be quite decent, but the main problem is where to get human resources. Our population mobility is still low. If people do go, then to recognized centers of attraction. These are Moscow, St. Petersburg, and partly the Krasnodar Territory.

This means that, at best, the local population will go to new cities, if they appear. But the problem is that depopulation has been going on in Siberia and the Far East for a long time. During the post-Soviet period, Siberia has lost about 10% of its population, the Far Eastern Federal District - more than 20%. 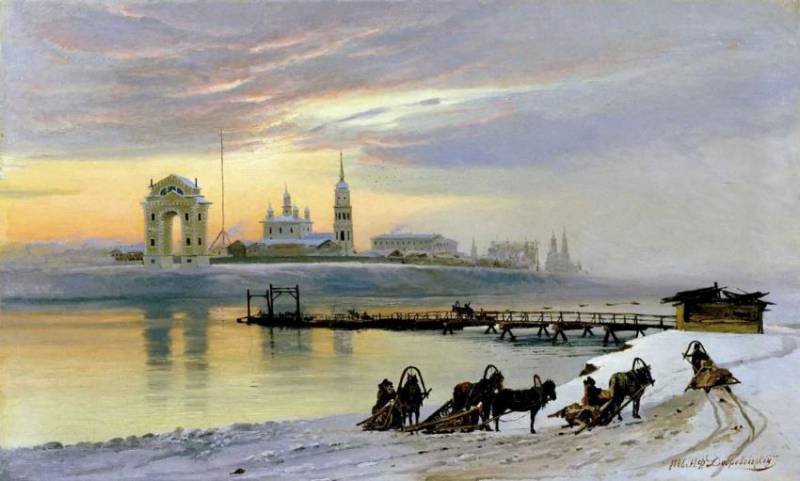 Siberian tract. Painting by N.F. Dobrovolsky "Crossing the Angara near Irkutsk"
The influx of people is possible only from the existing large cities in Siberia, which themselves are fighting not even to preserve, but to minimize the decline in their numbers. Look at compatriots abroad? The idea is good, but nothing more.

For all 30 years, the Russian Federation has been indifferent to the interests and needs of Russian speakers in the CIS countries. No repatriation program has been implemented. Why would this mechanism work now. And to populate new settlements with migrants from Central Asia will not even be a mistake, but a complete failure of the “bright idea”.

The next problem is financial. During the discussion of the idea with the President of the Russian Federation, the sacred phrase has already sounded: there is no money. But Shoigu said that Vladimir Putin responded as follows:

In fact, the state has money, in its reserves there are hundreds of billions of dollars, not rubles, but it is terrified of investing it alone. It is easier to convert the profit into gold and foreign currency than to create something real on public funds on your own.

It was no coincidence that the Minister of Defense said that

"The main locomotive of capital investments in the implementation of macroeconomic projects in Siberia, along with state funds, should be private capital."

In other words, those same business groups will take government funds, build new production facilities on them, and, of course, become their owners.

And people who risked breaking away from their homes in new cities will become hostages of the interests of a narrow circle of businessmen in many respects. Whatever one may say, at the first stage, the life of new cities will depend on the well-being of the city-forming enterprises.

And those, in turn, will depend on the situation in world markets. Who can predict whether products from Siberian aluminum, by-product coke or timber processing plants will be in demand in the future? No one.

But in this "nebula" around Shoigu's idea there are still grains of reason. It is reasonable to start a new development of the Siberian expanses on the basis of further development of the transport infrastructure. The leader of the "United Russia" within the framework of the new "Siberian" program spoke about the project "Cedar tract". The highway should become one of the branches of the Chinese "Silk Road".

"Kedrovy trakt" will pass exclusively through the territory of Russia. It will be a safe transit route, free from the problems of the main Chinese project.

"Cedar tract" is relevant. For twenty years now, the Asia-Pacific region has been simply beating its head against the Russian “gates” with an appeal: give us a modern transport corridor to Europe. It is beneficial to everyone, Russia can make a lot of money on the logistics of goods.

Recent problems on the Suez Canal have made this topic even more relevant. At the just held Eastern Economic Forum, representatives of Asian countries said that they are ready to send significant volumes of goods through the Russian Federation. But our country is still not able to "digest" them.

As one of the Vietnamese businessmen noted at the WEF, the port infrastructure of the Primorsky Territory (the main sea gate of Russia in the Far East) is radically lagging behind the needs of trade. For example, in Vladivostok, it is urgently required to build another port specialized for receiving sea containers.

Container ships from Vietnam are now idle at sea for several months, waiting for reloading in Russian ports. And behind the underdevelopment of the port infrastructure, the problems of the rest of the transport sector are hidden.

Thus, in the east of the country, first of all, modern transport routes are needed, on which "nodes" in the form of settlements will necessarily appear. At first, they will concentrate the population involved in servicing infrastructure and traffic flows.

And already at the next stages, these "nodules" are able to grow, realizing the potential of the adjacent territories, including the resource one. And here is the word for project financing - if investors have an interest in a particular product based on a specific resource base, it will be realized. The availability of transport infrastructure will be a big plus for any endeavor.

And here it is worth taking a closer look at the "Golden Path" project, which has been stubbornly promoted for several years by Oleg Bezrodny, now the president of the "Rustime" association. He advocates in every possible way for the development of the Siberian expanses, but with the help of the creation of a modern broadband highway, which should run from Voronezh to Primorye.

Every hundred to two hundred kilometers, it is proposed to create service centers for servicing transport and passenger flows with elements of tourism and recreation. These "crystals" can just grow over time into something more significant. This approach will be a logical development of territories, in contrast to the infusion of huge funds into the construction of large cities in the middle of the taiga. Better to start small.

Ctrl Enter
Noticed oshЫbku Highlight text and press. Ctrl + Enter
We are
What you didn't want to know about EnglandWhy Mikhail Lomonosov was sentenced to death?
Military Reviewin Yandex News
Military Reviewin Google News
236 comments
Information
Dear reader, to leave comments on the publication, you must sign in.