US to build new submarines with strategic missiles 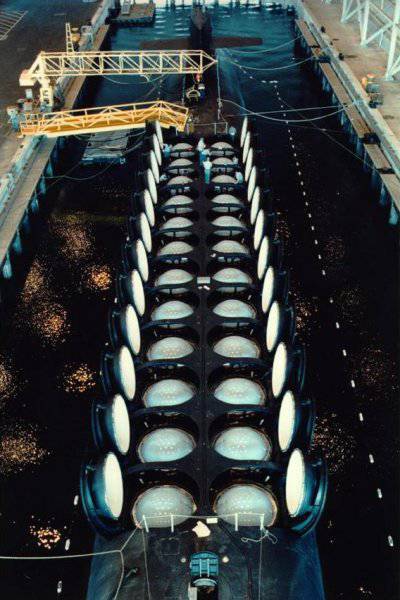 September 6 marks the fifteenth anniversary of the introduction of the USS “Louisiana” nuclear submarine (SSBN-743) into the US Navy. This submarine was the last ship of the project "Ohio" ("Ohio"), launched in the seventies. In 2002, after the withdrawal from the composition fleet Ohio's Benjamin Franklin project boats remained the only American type of nuclear submarine with ballistic missiles. Since then, a lot of time has passed and it is time to begin creating new projects of submarines, which will replace the existing ones.

The last days have been fruitful on events concerning the future of the American and British submarine fleets. At first, on August 31, the Washington Navy Yard Washington Shipyard signed the basic requirements for prospective boats, and on September 6 there were reports that the fleet command had approved these requirements. The approved package of documents is the first step towards the creation of two projects at once: the American “Ohio Replacement” (“Replacement for Ohio”) and the English “Successor”. The signing of the papers was not without loud statements. According to the head of the Ohio Replacement program, V. Brukhema, the certified document marks a significant advance in the construction of strategic submarines.

The content of the technical requirements documentation has not yet been fully announced - only approximate terms for its implementation were announced. From the above it follows that new submarines will be in service for several decades and will be able to set a new record for the duration of service. So, the construction of the first boat is now planned for the 2021 fiscal year. In 2027, the lead submarine will be handed over to the fleet, and through 3-4 of the year, she will go on her first duty with missiles on board. Construction of the entire series will last until 2040-45's, when "Ohio Replacement" will be the only type of submarines in service. However, the timing of deliveries of new boats, but the timing of their cancellation, looks much more interesting. According to those responsible for the Ohio Replacement program, submarines of this type will plow the oceans until the 2080 year. For this reason, now we have to take into account a number of technical issues, as well as the features of especially long-term operation.

One of the problems that the customer and potential contractors face is the provision of new boats with the possibility of using such strategic missiles that are not only not yet existing, but are not even planned for the time being. To this end, the question of the maximum unification of launching devices for ballistic missiles or even the creation of a universal mine for submarines is currently being worked out. Such devices should be installed on the "Ohio Replacement", which will allow to re-equip the boat with a relatively small effort. In addition, new universal launch shafts will become the basis of armament not only for American submarines. The English prospective Successor project will also receive this equipment, which is expected to be jointly developed by the United States and the United Kingdom. 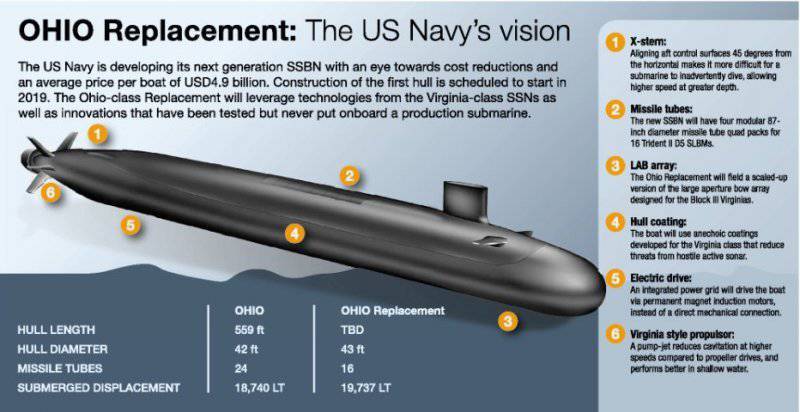 It is not clear yet which missiles will form the basis of the armament of the boats created by the Ohio Replacement program. It will probably be new ballistic missiles continuing the current American Trident SLBM line. However, so far there are no reports of the existence or at least plans to create a "Trident III" or another promising missile. At the same time, we can already speak about the approximate characteristics of the main armament of promising boats. At recent events, fleet representatives made the reservation that the existing 14 “Ohio” submarines could be replaced only with the 12 submarines. From this it is possible to draw certain conclusions regarding the combat potential and requirements for new missiles. Probably, the number of missiles will be compensated by their quality, namely, an even higher range and a greater number of warheads.

Interestingly announced approach to the creation of new boats. Earlier, in the 1995, the UGM-133A “Trident II” D5 missiles were adopted by the British Navy as weapons for “Vanguard” type boats. Adoption was preceded by a number of military-technical agreements, the transfer of relevant documentation, etc. In this case, the developers of the missiles remained the United States. Now, apparently, the role of Britain in the creation of new weapons will be much greater. British engineers, at least, will take part in the creation of universal launchers for their own and American nuclear submarines. It is possible that in the very near future it will become known about a similar approach to the development of promising missiles themselves, but there is no official information on this issue yet.

The announced project of a new submarine with ballistic missiles is interesting for several reasons at once. Firstly, the creation of such military equipment always attracts attention. Secondly, the Ohio Replacement program should lead to a complete replacement of existing Ohio-type boats, which are currently the only American ballistic missile submarines. Finally, the estimated service life of new submarines looks ambiguous, which also stirs public interest. Given the American practice of lighting and advertising of such projects, in the very near future we can expect new messages, and not necessarily positive ones. It may well be that, due to the complexity of the tasks assigned, new SSBNs and missiles for them will be created with a significant lag behind the originally set deadlines.