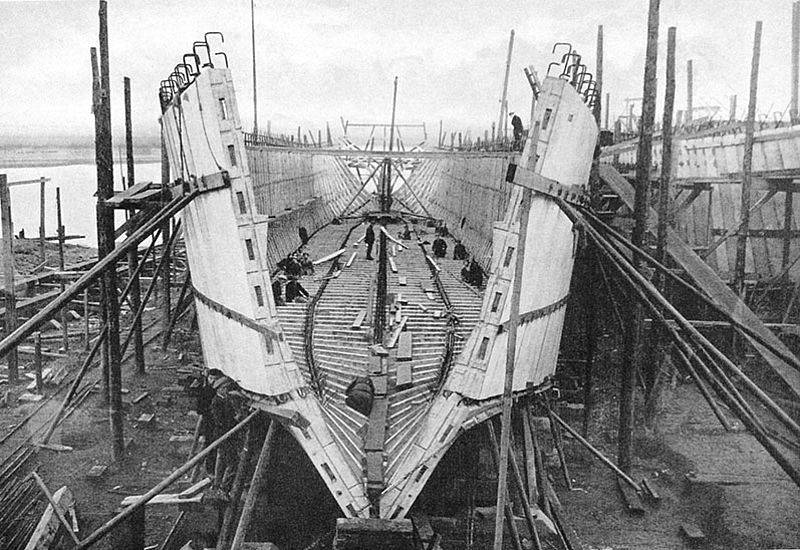 Building a ship from concrete in the USA during the First World War, photo: erazvitie.org

For thousands of years, people have been building various floating facilities. For many years, wood was the only available and most suitable shipbuilding material. Over time, it was replaced by steel. But even then, the thought of the shipbuilders did not stop. Humanity has always looked for alternative materials; in the XNUMXth century, concrete suddenly became such a material in shipbuilding.

It is worth noting that concrete, like steel, was a more profitable material than wood. Such material does not rot, does not burn, and has good strength. At the same time, the shipbuilders turned to unusual research not from a good life. The demand for reinforced concrete ships appeared during the First World War after a simultaneous shortage of steel and tonnage of operating merchant fleets.

In the XNUMXth century, the search began for an alternative material to wood that could be used in the construction of ships. The obvious choice was steel, which will replace wood. However, the cost of steel itself and the cost of building steel-hull ships were considered high. The very process of such construction in the XNUMXth century looked very laborious and time consuming. It is not surprising that the search for an alternative material in shipbuilding that would be cheap and technologically advanced did not stop.

Concrete has suddenly become such a material. Back in the middle of the 1854th century, the French inventor Jean-Louis Lambo proposed an unusual project that attracted the attention of visitors to the Paris World Exhibition of XNUMX. The inventor presented a rowing boat, the highlight of which was the material and manufacturing technology. 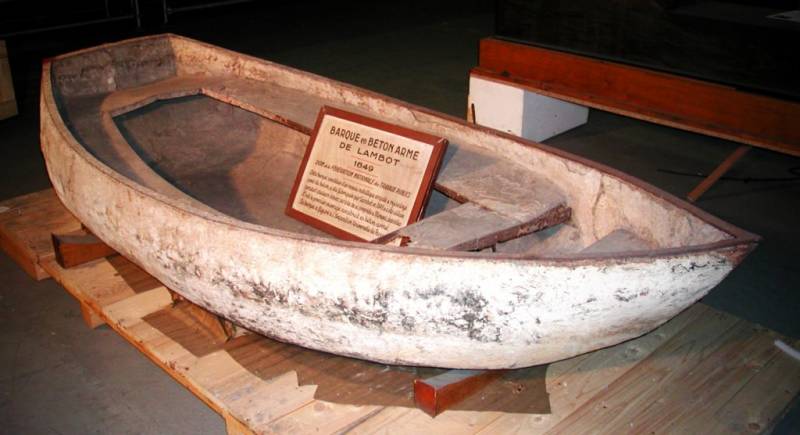 Concrete boat Lambo at the Brignoles Museum, photo: podparusami.club
The frame of the boat was made of wire mesh, which was covered with cement. Jean Louis Lambo presented his invention as something capable of completely replacing wood. Inventors from many countries of the world showed interest in the new product, who began to create their own models of boats and yachts. True, this interest did not last long and the project was quickly forgotten. This was not surprising, given the speed at which technology developed in those years.

The idea of ​​building ships from concrete was returned already in the first quarter of the 1914th century. And they remembered such an opportunity far from a good life. Until XNUMX, not the richest countries in the world were engaged in the construction of reinforced concrete ships. Such ships in single copies were produced, for example, by Turkey and China.

However, after the outbreak of the First World War, there was a shortage of industrial steel stocks in the world, and at the same time, the tonnage deficit of the existing trade was growing. fleet... The volume of military cargo transportation grew, at the same time the ships were out of order, including being destroyed or intercepted by the enemy. Against this background, since 1915, almost all developed countries have turned their attention to ships made of reinforced concrete.

Until 1919, work on the construction of such ships was actively carried out in the USA, Great Britain, Germany, France, Sweden, Norway, Denmark, the Netherlands, Italy and other states. In total, at least a thousand concrete vessels for various purposes (barges, dry cargo ships, self-propelled ferries, sea tugs, etc.) with a total tonnage of more than 600 thousand tons were assembled. At the same time, with the end of the First World War, the construction of such ships again came to naught. 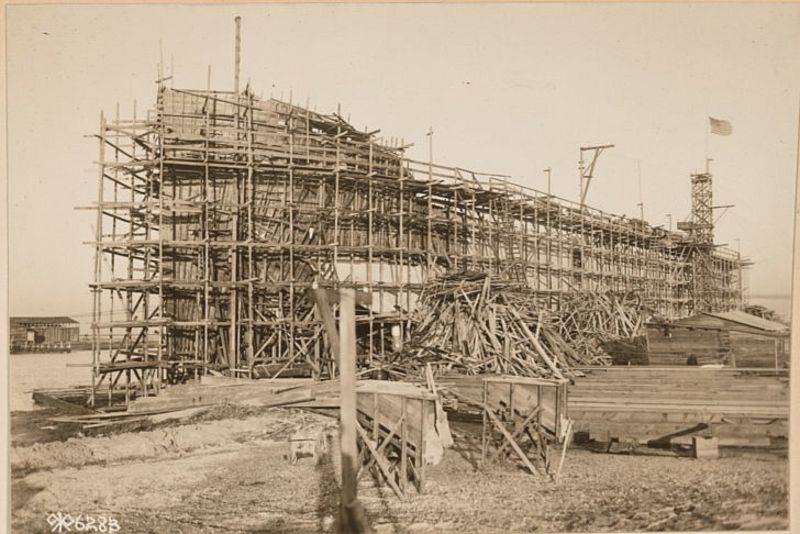 Construction of the first American concrete ship Faith, photo: twitter.com/CenturyAgoToday
The most famous is a series of concrete ships built in the United States during the First World War. The Americans were impressed by the project of the Norwegian designer Nikolai Fegner, who in 1917 built a reinforced concrete self-propelled sea vessel. The 26-meter ship with a displacement of about 400 tons was named "Namsenfjord".

Impressed by the Norwegian project in the United States, a much larger vessel was created a year later. In March 1918, the dry cargo ship Faith was launched. The ship was large enough. The hull length exceeded 100 meters, and the displacement was 6125 tons. The power of the power plants installed on board was 1760 hp. This ship finally convinced the Americans of the possibilities and prospects of concrete shipbuilding.

Almost immediately, President Woodrow Wilson approved a project to build 24 concrete ships for the merchant and auxiliary fleet. The project amounted to $ 50 million (taking into account inflation over $ 11 billion at today's exchange rate). The ships were supposed to expand the transport capabilities of the American fleet during the First World War. But by the time of their active construction, the war came to an end.

Under this program, 12 ships were completed, exactly half of the planned volume. Moreover, they were all commissioned after the war. Today you can easily find information about what happened to each of the 12 built ships, this information is available on the Internet. It can only be noted that the very first dry cargo ship Faith, which was built even before the series was laid, served only a few years and sank off the coast of Cuba in 1921. 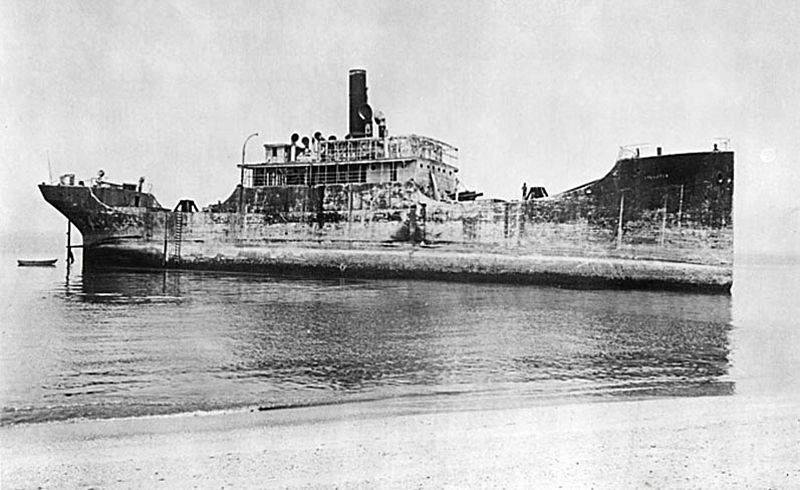 Stranded concrete steamer SS Atlantus, photo 1926
The second surge of interest in concrete ships arose already during the Second World War. This time, the United States managed to build 24 such ships. They were all built from 1942 to 1943. During the interwar period, construction technology was improved, new ships were stronger and lighter than their predecessors.

By July 1943, the order was fully completed, while the construction of one ship took less than a month. The Americans sank two reinforced concrete ships as barriers during the Normandy landings. Some of the ships that survived the war were used as breakwaters. And the concrete ship Quartz, which survived World War II, was used by the Americans in nuclear tests. weapons on Bikini Atoll. The ship was used to assess the level of damage caused by a nuclear explosion.

Pros and cons of concrete ships

Concrete ships, which were built at the beginning of the XNUMXth century, were mainly used to transport coal, oil, and also worked well for transporting dry bulk cargo, such as sugar. In this regard, they surpassed even steel counterparts, since concrete ships did not have the problem of condensation from which ordinary steel ships suffered. So for cargo that did not tolerate moisture, concrete ships were definitely better.

The main advantages of reinforced concrete ships were the low cost of construction, as well as the possibility of using low-skilled personnel, without the distraction of specialists from traditional shipyards. The non-susceptibility of concrete to corrosion and the fire-resistant properties of the material were also named as important advantages. In addition, the ease of construction had a positive effect on the construction time of the ships.

In addition to the pros, the concrete ships had obvious downsides. To provide strength comparable to metal, the thickness of the hull of concrete ships had to be several times greater. The heavy hull of such vessels caused a large draft, which reduced their passability in shallow water, in canals and rivers. In turn, the large thickness of the hull also reduced the internal useful volume of the holds. 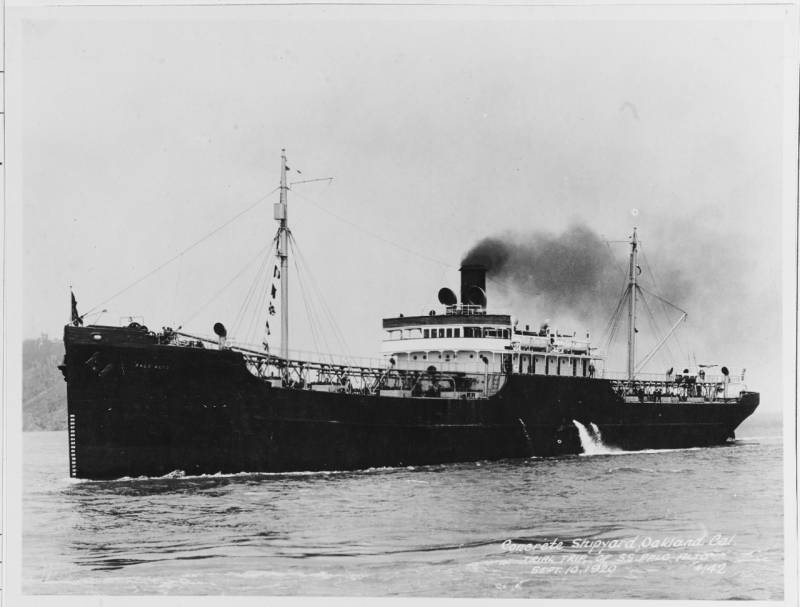 American Reinforced Concrete Oil Tanker Palo Alto, California, 1920, photo: wikimedia.org
Since concrete ships are heavier than steel ones, in order to ensure comparable payload indicators, it would be necessary to build ships of large sizes, including in size, which leads to an increase in towing resistance. Such ships need to be equipped with more powerful propulsion systems, which makes their operation in many aspects unprofitable, negating all other economic advantages.

Another major drawback is that concrete, which can withstand strong static loads, is easily damaged by severe collisions or impacts. For example, the American dry cargo ship Cape Fear, launched in 1919, sank in 1920 after colliding with another vessel. The ship with 19 crew members on board sank in just three minutes.

The experience of the First and Second World Wars, as well as post-war shipbuilding, made it possible to form a nomenclature of ships for which the reinforced concrete structure turned out to be the most justified and expedient. This category includes ships of the docking fleet or non-self-propelled vessels. For example, scows, barges, ferries, lighters. Such ships can be left without maintenance for a long time, they do not rust and require less repair costs, being laid up for decades.

At the same time, a few years after the Second World War, reinforced concrete shipbuilding practically disappeared. Currently, only a few enthusiasts are mainly interested in such projects. The most cost-effective and survived to this day are floating structures made of reinforced concrete - docks and landing stages. Simplified construction technology, high durability and low construction costs allow them to exist in the modern world.