End of the era of armored monsters 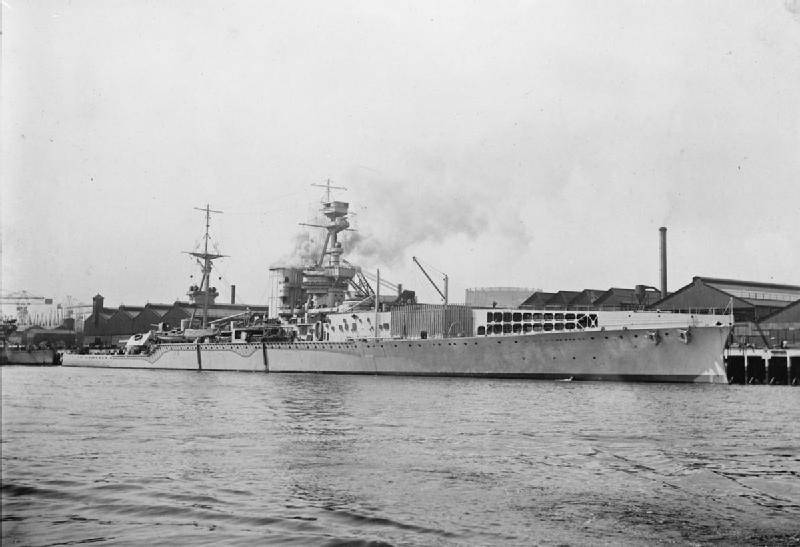 In 1906, a new type of battleship "Dreadnought" was completed, with a displacement of 21 thousand tons and with 305 10 mm guns. The ship, both in size (160x25 m) and in armament, seemed like a monster, against the background of which all the other battleships of the world were lost. Only eight years later, this same "Dreadnought" was an obsolete little ship with extremely weak artillery. And in just eight years, Britain built 26 battleships just for itself. The displacement of the latter reached 33 tons, dimensions - 000x197 m, and the caliber of guns - 27 mm.

The war did not stop the process, and by its end there were more ships. So, Great Britain, despite the losses, ended the war with 33 battleships and 9 battle cruisers. There is no point in talking about Germany and Austria-Hungary, the losers lost everything, but the United States built 17 battleships. Japan was not far behind - 8 battleships and 4 battle cruisers by 1921. The French and those, weakened by the war, mastered the construction of 7 ships, the Italians - 6. Russia swung at 8 battleships and 4 battle cruisers, but one battleship and all cruisers were cut unfinished as a result of the Civil War, and the Black Sea battleships were killed - one from an explosion, one from obscene world, the third was hijacked by the whites. Another one burned out in the Baltic ...

You have to understand - apart from battleships, other ships have not gone anywhere, moreover, on the way from the Dreadnought to the Versailles world, dogs in the form of cruisers, destroyers, submarines and other things have grown in size and quantity. The role of the fleets in the war was, however, not that heroic - the German fleet did not break the blockade of the British, did not defeat the Grand Fleet, did not stop Britain's maritime trade, and did not even break through to St. Petersburg, but rebelled to its fullest in 1918. The British, however, provided a long-range blockade of the enemy, but could not defeat the Hochseeflotte, and could not suppress the Russian revolution, and in general could not. The Russian fleet, on the other hand, became famous for several things - coastal defense battleships (which have no analogues, as they would say now), the murders of their officers and the role of the locomotive of anarchy in the country. Again, our RIF (Russian and imperial) fought well, but for some reason, with exceptionally small or outdated ships. Heroic battles - destroyers and old cruisers, Baltic "Varyag" and "Koreets" - gunboats, victory in a linear battle - old EBR, defense of the Gulf of Riga - they are the same. It seems that we had battleships, that we didn’t ... Without them it would have been better, the victims of the anarchist sailors would not let us lie.

With such a peculiar experience, it would seem that it's time to think and slow down, since new means of war at sea are massively appearing - submarines, aircraft (and the first aircraft carriers), torpedo boats ... weapons among the surviving superpowers, and even monstrous ships threatened to end up on the stocks.

And the start of the transition of calibers beyond common sense was given by the British back in the years of the Great War, when Jackie Fischer thought of a light battle cruiser with 4 main guns of only 457 mm. For the so-called Baltic project, Fischer set up different things:

“These monitors were of an outlandish type. This had two 14-inch guns in the turret in the bow and an anti-mine attachment sticking out along the hull like crinoline frills. She protected him from torpedo attacks, but reduced the maximum speed to 6 knots. They were originally built by Lord Fisher as part of fleetintended for operations in the Baltic Sea, but God knows what they would have done there if they got there, and I doubt if Fischer himself knew that. Although the Baltic project never materialized, it bears responsibility for the waste of money and labor. In addition to monitors, expensive anomalies like Furies and Glories were also intended for this purpose. "
For this, instead of handing over the overworked lord to specialists with kind and a little tired eyes, he was sent into honorary retirement. Be that as it may, the groundwork was given, and then it went. After Fischer, the British planned as many as four "Hoods", quite traditional, four battle cruisers with a main caliber 406 mm in three three-gun turrets and battleships of type 3 already with 457 mm guns. But the British plans pale in comparison to the Japanese and American ones. All the same, the pitiful four battleships and 8 battle cruisers are about nothing.

The Japanese planned to build 16 battleships - 8 battleships and 8 battle cruisers, apparently similar to the 6 + 6 period of the Russian-Japanese period. Battleships of the "Tosa" type were supposed to reach a displacement of 45 tons, a speed of 000 knots, and an armament of 27 guns with a caliber of 10 mm. Then the battleships "Kii" were planned, with a displacement of already under 410 tons, and a length of 50 meters. The Japanese admirals saw battle cruisers with about the same monsters and with the same artillery, only a little faster and more autonomous.

The Americans approached the matter with a truly American scale - they responded to 8 + 8 with the law on the fleet, within which the US Navy was supposed to be able to fight simultaneously with the British and Japanese. It was laid down (in addition to the already practically built four battleships with a 406 mm GK) six battleships of the Lexington type with a length of 260 meters and a GK 3x3 406 mm. Dreams of technocrats went further, admirals and designers started talking about calibers 480 and even 500 mm.

Fortunately, the madness was stopped and an agreement was reached, and from all this "splendor" one "Hood" was embodied in metal in Britain, in whose company two battleships were built within the framework of the Washington restrictions (35 tons and 000 mm of main battery), three battleships of the " Colorado "in the United States, and two types of" Nagato "in Japan. The world was lucky, until the advent of His Majesty the aircraft carrier was only a few years away, and Her Majesty the submarine was already reigning. And the only thing that shone on the huge dinosaurs in World War II was the fate of Tirpitz at best, and at worst the fate of Yamato or Prince of Wales.

The hysteria over useless iron monsters was slowed down for 10 years. And before the start of World War II, they did not reach perversion, well, except for the Japanese, who, of course, created a wonder of the world:

"There are three biggest and most useless things in the world: the Egyptian pyramids, the Great Wall of China and the battleship Yamato."
But a miracle is useless, and according to Admiral Yamamoto:

“These ships are reminiscent of the calligraphic religious scrolls that old people hang in their homes. They have not proven their worth. It's just a matter of faith, not reality. "
And what echoes well another quote about the value of battleships in the post-war period in general:

"A battleship was for many years to admirals what a cathedral was to bishops."
The era of battleships is gone, and those who spent a minimum of money on them and did not actually reach the monsters with a displacement far beyond 200 tons and 460 millimeter guns were lucky.