10 September 2012
10
Three small stories about dreams, posts and photos from the life of our "point" and young years ...

In April, we stopped at three BeTeRs and one “seagull” to hell with horns, so to speak. The authorities decided MMG there interim support point to do.
April in the Pamirs. It is already warm but, ugly, gray and dreary ...
First night There is nowhere to be placed. Tent and stuff not yet brought up. Where to sleep? Who is in armor, who is not ... there was some abandoned carriage standing there, we examined it, it suits.
We go to bed, throwing sleeping bags on the floor. Shops in automatic, automatic fuse off. We sleep But ... sensitively.
By morning, the night guard changed and attempted to enter the trailer.
Everyone “sleeps” and listens as someone tries to lift the hook through the slot in the door and pull it off, with which it is closed.
As soon as the hook finally bounces off, from all corners of the carriage, clicks of the twitch bolts are heard, and a frightened cry is heard from behind the door:
- Guys, don't shoot !!! This is me - Bandera !!! I !!! I !!!
Someone from the trailer answers:
- Bender, what are you, mu ... k? It is necessary to knock !!!
And again, all "sleep" .... 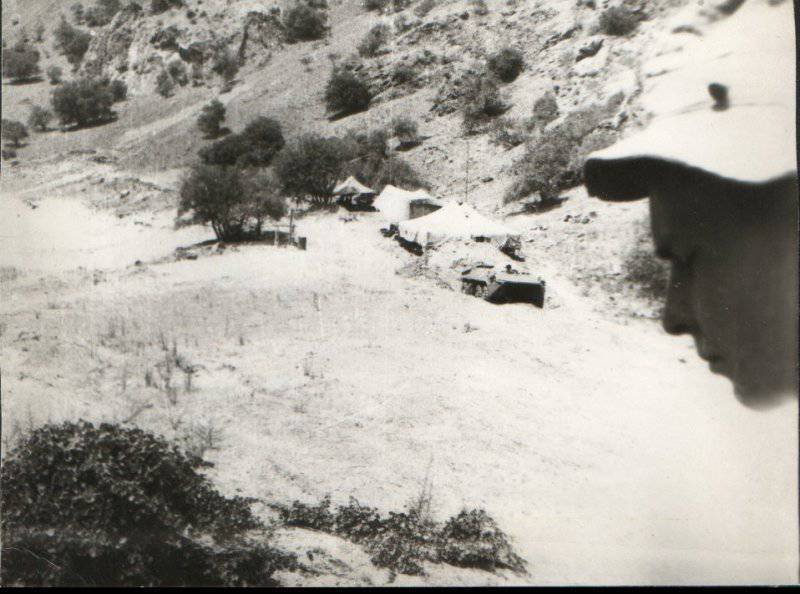 Photos from a personal album. View of our "point" from the position of LNG and the far caponier

I am young, in the first year.
My very first night on the "point" in the night guard.
There were usually two security exchanges. Two to three people. The exact place where they are was not. Now in one place, then in another, wandering around to the discretion of the elder.
I got with my two "grandfathers". Stopped from the second half of the night until the morning.
They rotated around the bush, found a good place and decided to sit there until the end. More precisely, the "grandfathers" decided to sleep, and I did not understand this yet.
Sit. "Grandfathers" pitch me with bikes about "cut outposts", "black widows" and other amenities of the service. In the end they say:
- Usually THEY arrive in the morning. Hours from 4 to 5. The very dream.
Then continue:
“Okay, time to sleep.” Let's lie down. And so do we.
Wrapped in pea jackets and sleep. But I can not. I sit like an owl. I heard their fables and damned everywhere. Fearfully ! I looked at my machine gun, I think:
- Well, nafig!
Pushed to his PC. So with him in the arms until the morning and sat out his eyes without closing.
Utrechkom "grandfathers" woke up. They were surprised. They say:
- Are you not sleeping or what?
Laugh Lit short "young."
Although I later myself also divorced my "young" people.