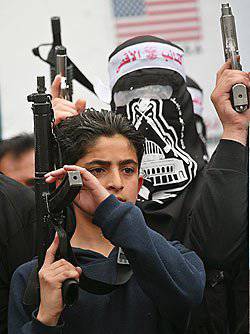 In 1212, two decades after the Knights of the Crusaders lost Jerusalem, a boy named Stephen appeared in a French village, who called himself the messenger of God and said that everyone who was eager for the Holy Sepulcher was a sinner, and a shrine only children will get, for their faith is pure and they don’t know sin. The message swept through France in an avalanche, and soon the roads were filled with crowds of juvenile "liberators" of the Holy Land.

The children went to the sea, they died from hunger and disease, became victims of the robbers and, probably, everything would have died if the merchant had not caught them, who had sworn that he would send all the minor crusaders to Palestine for the sake of God's reward. Kommersant actually delivered them to Marseille, loaded them into the port on seven ships (two of them would later die on the way), but brought ... to Egypt, straight to the slave market.

In the same year, driven by the same great goal, tens of thousands of little Germans came out of the Lower Rhineland regions of Genoa under the leadership of nine-year-old Nikolai. They reached the coast, but the Genoese drove the children out of the city. Not having calmed down, the children went to Rome to ask the Pope for blessings and help for the fulfillment of the holy vow. Only a few got to the Eternal City, and Pope Innocent III - let us pay tribute to his wisdom - persuaded the children to postpone the fulfillment of the vow to adulthood.

The crusade of the French and German boys was, perhaps, the first in the world stories An example of a military enterprise in which children became soldiers. The situation repeated itself in a little over seven centuries.

In World War II, Hitler’s Germany already four years after it began began to experience an acute shortage of human material in all industries and in the army. The Nazis used a whole range of methods of replacing men called up by the Wehrmacht: the use of prisoners of war, the export of labor from the occupied areas, the forced recruitment of German women and teenagers to work in the workplace.

The autumn of 1943 initiated the campaign for the recruitment of under-age youth for military service. And the year 1944 was declared the “year of the volunteer”. But if at that time boys and girls were going to the Wehrmacht mostly without any hard pressure, then in January 1945, the leadership of the Hitler Youth announced an imperial conscription to the armed forces. Over 70% of 1928 youths of birth should have declared their readiness to join the army. 17-year-old boys and 18-year-old girls were sent to auxiliary units. From September 1944 to January 1945, the Wehrmacht was replenished with about a quarter of a million students yesterday.

Already in the midst of the collapse of the Nazi empire began to take a set of 14 – 16-year “volunteers”. Detachments were formed from them, which were charged with covering up the withdrawal of units of the Wehrmacht, committing sabotage acts in the rear of the forces of the anti-Hitler coalition, mainly Soviet forces. Hastily trained, unstretched, physically weak, without experienced guidance, these child soldiers were doomed to destruction. Despite the attempts of the massive use of parts of the Hitler Youth, they were somehow incapable of somehow reversing the disastrous situation at the front.

This naturally begs the question: did the children in the Red Army fight on a regular basis during the Great Patriotic War? Not. True, it is known that in many divisions there were so-called "sons of the regiments". These were mostly boys picked up by soldiers on the roads of war. Hundreds and even thousands of teenagers joined guerrilla groups, underground organizations.

The Great Soviet Encyclopedia contains such information: military orders and medals in 1941 – 1945 show feats over 35 in thousands of pioneers. And how many of them did not receive any awards? So, though not on a formal basis, not in special children's units, there were quite a few Soviet child soldiers on the Great Patriotic War.

... AND AT THE BEGINNING OF THE XXI CENTURY

Since then, more than 60 years have passed. However, both the media and international observers have recently increasingly documented the participation of young people under 16 in armed conflicts in many regions of the world. There is quite reliable information provided by the United Nations Children's Fund on the presence of 10 – 12-year-old soldiers in some places, including boys and girls. Over the past decade, 2 million children have died in various hot spots in the world, and 6 million more have been seriously injured or have become disabled. Among those killed and maimed are at least half a million juvenile "warriors." According to the Foundation, they are still involved in combat operations in Colombia, Sri Lanka, Turkey, Chechnya ...

However, the worst situation is in the countries of Central and West Africa: every tenth child there is a member of one or another armed group. Today, only in the Democratic Republic of the Congo, more than half of the personnel of all military formations (30 thousand) are minors. Such “fighters” in early August of last year in Monrovia, the capital of Liberia, stormed the city port, occupied by rebels. Earlier in Burundi, a detachment in which there were more than a hundred young soldiers attacked the capital of the country, and almost 50 of them were killed or injured.

In an atmosphere of unrest that has engulfed Uganda, the children of the adult leaders have become central figures in a whirlwind of murder and violence sweeping across the country. weapon. The eighteen-year standoff between the Lord’s Resistance Army and the government forced 1,6 million Ugandans (half of them children) to seek refuge in refugee camps from incessant attacks and killings. Attacks on unprotected civilian objects continue, and they are committed by completely “green” militants who are much younger than their victims.

The most disturbing aspect of the internecine strife in Uganda is the fact that it is a war of children against children: almost 70% of the “Lord’s Resistance Army” thugs are teenagers, some of whom are only eight years old. They are captured during raids on defenseless villages, subjected to savage treatment, and then they are forced to commit atrocities against those abducted as they are, even their own brothers and sisters. Those who try to escape are killed. From the beginning of the rebellion in the 1980s, a similar fate awaited about 30 thousand children. Moreover, this figure is growing rapidly: in the last 18 months alone, 10 thousands of boys and girls were kidnapped: they were then turned into soldiers, porters, or “wives” of the rebels.

The United Nations Children's Fund called on the leadership of the Tigers of Tamil Eelam Liberation - the separatist movement in Sri Lanka - to abandon the practice of recruiting adolescents into military units. However, after the adoption of the cease-fire agreement in 2002, 5400 children joined the ranks of the Tamil militants. And over the past six months, the number of minors admitted to the military units of the Tigers, although it has decreased from 110 to 40 people per month, but the recruitment continues to this day. During the same period, only 90 people were released. Recall that the number of combat units "Tigers", according to some sources, exceeds 10 thousand people. Thus, children under the age of 15 make up almost half of their personnel.

There is not even approximately reliable data on the participation of children in terrorist operations that are being conducted in Iraq, in Israel and in Chechnya. There, after all, the method of attack with the help of Islamic suicide bombers became widespread. And since it is easier to prepare children morally, turning them into religious fanatics, that is, there are quite real fears that this kind of use of children will increase.
OUTSIDE OF LEGAL FIELD

The mass participation of children in hostilities became possible as a result of the development and cheapening of light and easy-to-use automatic weapon systems (recalling, for example, the Kalashnikov assault rifle or the M-16 automatic rifle). Due to its availability over the past 10 years, the number of young fighters has increased, and their average age has decreased. In addition to a rifle or machine gun, adolescents often receive nothing more, but after completing a rigorous course of training, they successfully fight on a par with adults. Child soldiers lose the concept of the value of human life and become effective and disciplined performers. At the same time, the use of young militants is economically very profitable. Thus, the International Labor Organization reports that, for example, in Central Africa, 94% of underage "soldiers" do not receive any monetary compensation at all.

There are many public organizations in the world, whose direct task is to put up a fight against this evil - the transformation of children into cannon fodder. It is enough to name the UN Children's Fund, the Coalition for the Prevention of the Use of Child Soldiers, which includes Amnesty International, Human Rights Watch, the Society for Jesus Catholic Order for Refugees, the Quaker United Nations Office and others. The result of their actions was the Optional Protocol to the Convention on the Rights of the Child, prohibiting the use of children in armed groups. But this document is actually just another statement of intent. He is not provided with any instruments of pressure on countries and organizations for which juvenile “warriors” are common nowadays.

“Children continue to be used as infantry, porters, sentinel, and sex slaves,” said Casey Kelso, Coalition Coordinator, recently. He believes that with each new conflict, the problem only becomes more acute. In a statement, the Coalition also noted that from 111 countries that signed the Protocol, only 46 undertook the law to ensure its implementation. It is symbolic that these countries belong to a civilized community, in the armed forces of which there are no children.

The rest of the 65 states belong to the third world, where the presence of juvenile soldiers is the rule, not just blatant facts. Thus, even formally, today, in the twenty-first century, there is no international law punishing those who drive children into warring units. And there they are on the whole dying or turning into cripples - physical and moral.