9 September 2012
34
The Day of Remembrance of the Victims of Fascism is celebrated in our country annually, starting from the 1962 year. This mournful date falls on every second Sunday of September. September is the month of the beginning and end of the most terrible, inhuman and cruel in the whole world. stories of war. This mournful date is a reminder of those terrible days when millions of people died under shells, in concentration camps, in cities from catastrophic hunger and disease. Thousands of defenseless captive people died in terrible agony as a result of the monstrous "medical" experiments of fascist "scientists" above them.


For adherents of the anti-human ideology of fascism, human life was worth nothing. In the dark days of the great war over entire nations hung the threat of slavery and total annihilation. Nothing worse in the world has not happened. But having united forces, will and desire to live, the people of the whole world rebelled against the fascist contagion and fought against this terrible evil, not sparing themselves, fought day and night. The heroic Russian soldier, with fraternal help from the allies of various countries at the cost of inhuman efforts and deprivations, succeeded in defeating the army of an arrogant, ruthless and armed to the teeth enemy, on whose conscience there were millions of dead, hundreds of destroyed cities and burned villages.

Today, to the great regret of the living fighters against fascism and to the great shame of their descendants, attempts are being made to rehabilitate the fascist criminals, to revise the history of the Holocaust and to whitewash the accomplices of the anti-human fascist regime. Fascist crimes have no statute of limitations, which means that attempts to glorify fascism can and should be considered to be complicity in its dissemination. There should be no place for these attempts in the modern world. Mankind has paid too high a price to get rid of the brown plague. The nightmare of World War II should never happen again, and the memory of the victims of fascism should live for centuries. It all depends on you and me ... 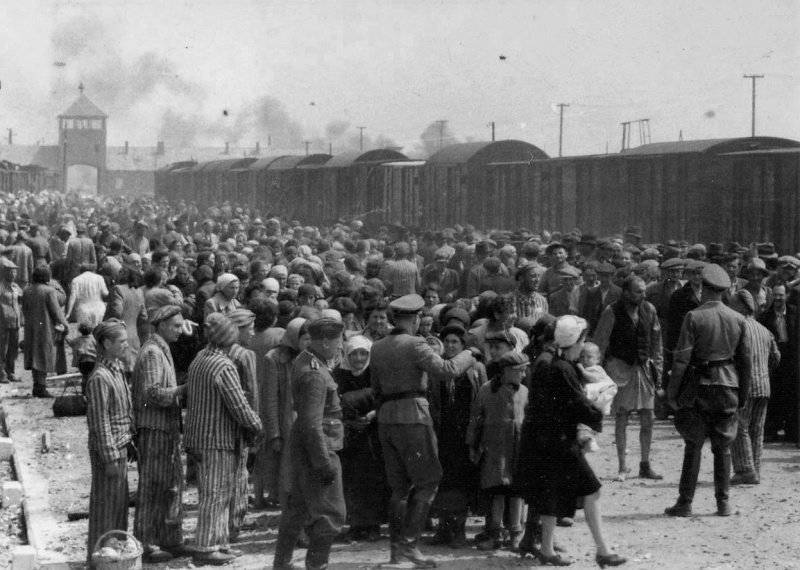 Arrival of the train with new prisoners at the concentration camp Auschwitz (Birkenau-Auschwitz). These people were brought from the Carpathian-Rusyn region (now Ukrainian Transcarpathia and eastern Slovakia). In the background photos are visible the notorious gate to the camp 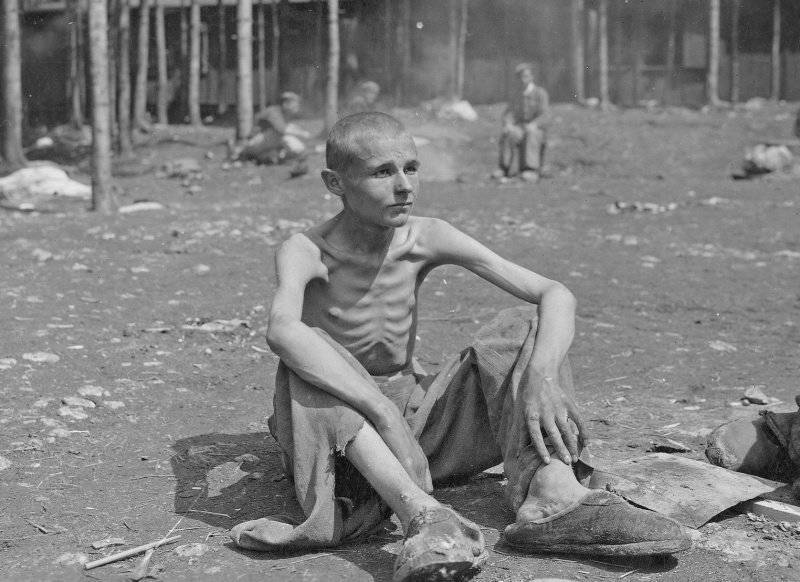 One of the emaciated prisoners of the camp at Ebensee is basking in the sun. The camp in Ebensee was one of the branches of the infamous Mauthausen concentration camp, organized in 1943 for the construction of an underground complex in the mountain range of the Austrian Alps. 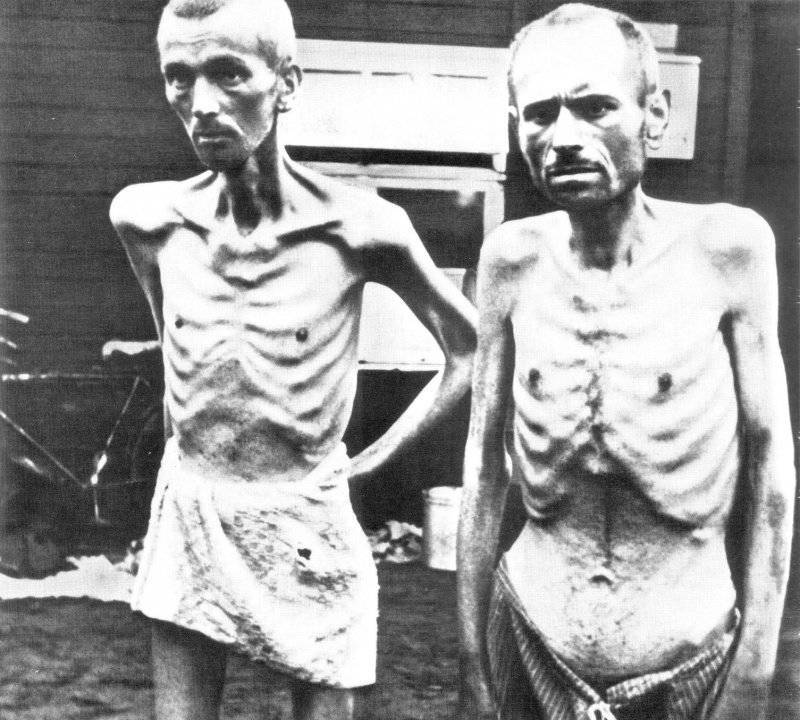 Prisoners of the Ravensbruck concentration camp 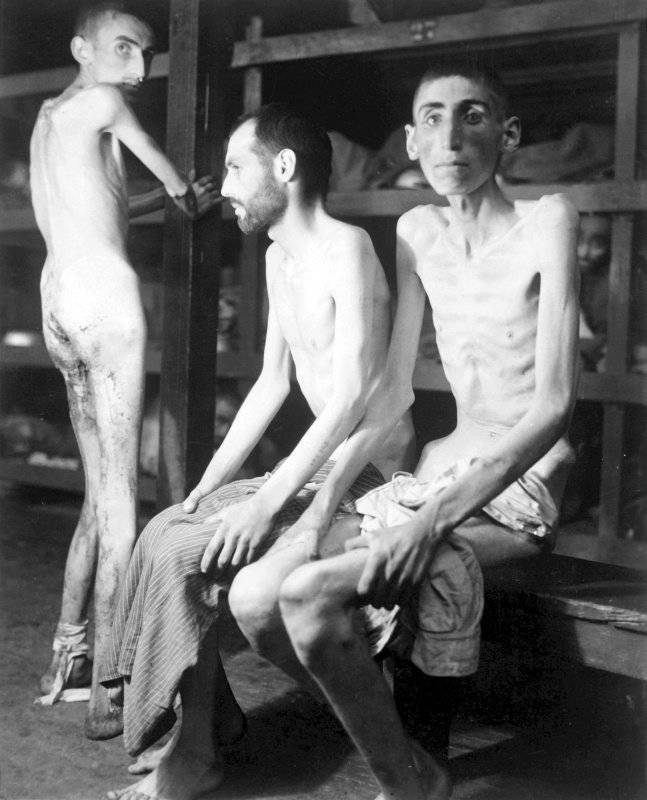 Prisoners of the Buchenwald concentration camp. Their average weight in this photo is 30 kilograms. 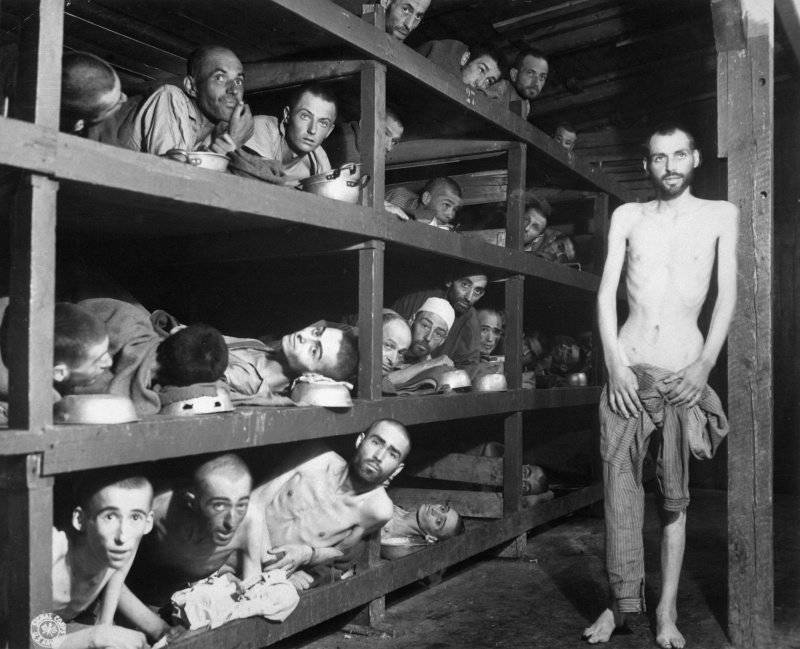 Prisoners of the Buchenwald concentration camp inside the hut 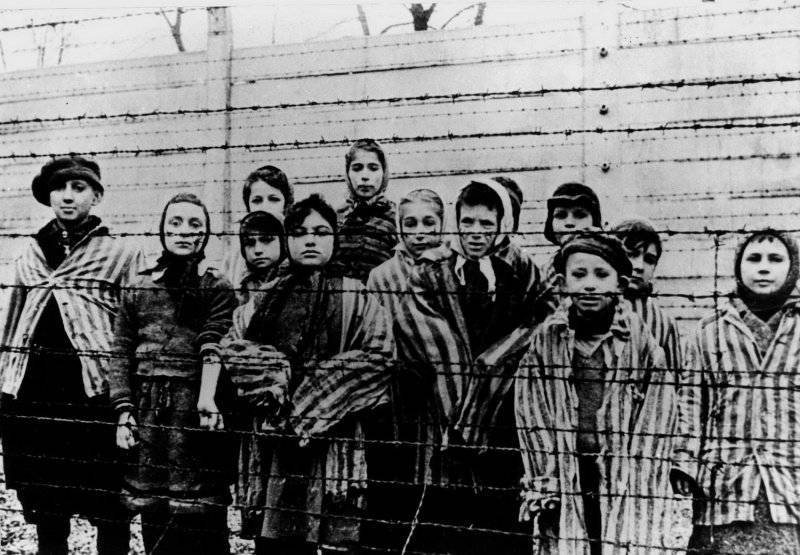 A group of children released from the Auschwitz concentration camp (Auschwitz). In total, about 7500 people were released in the camp, including children. About 50 of thousands of prisoners, the Germans managed to take them from Auschwitz to other camps until the Red Army units approached. 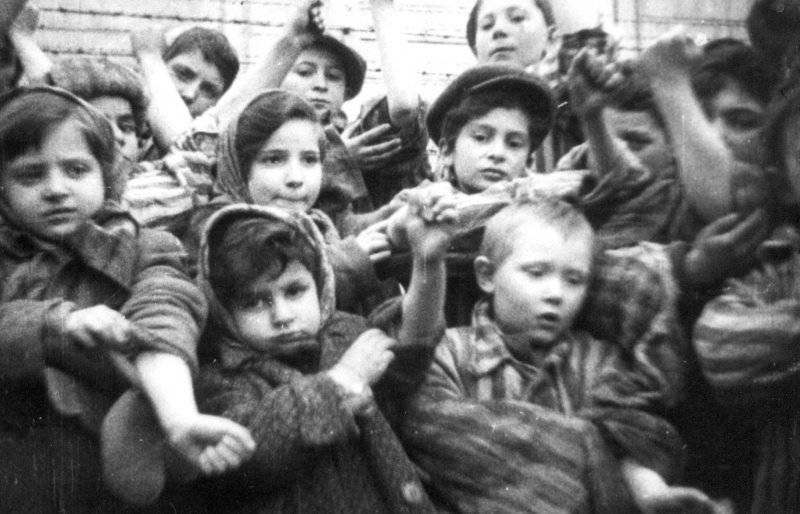 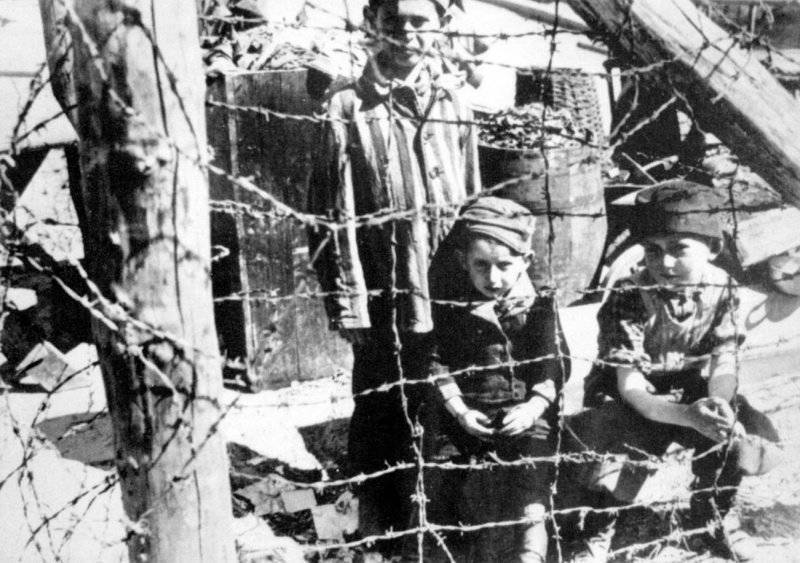 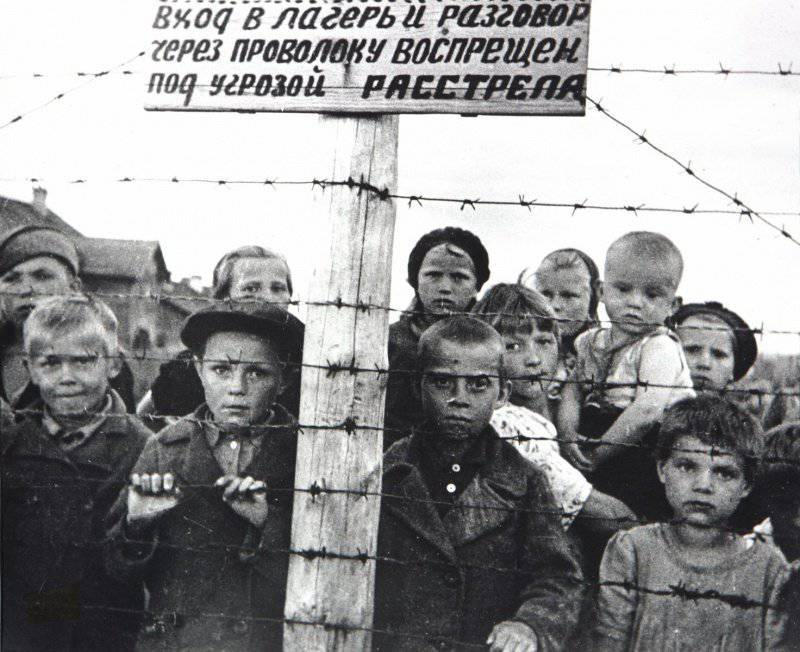 Soviet children-prisoners of the 6 Finnish concentration camp in Petrozavodsk. During the occupation of Soviet Karelia by the Finns, six concentration camps were established in Petrozavodsk to support local Russian-speaking residents. Camp No.6 was located in the Transshipment Exchange area, and 7000 people were kept there. The photo was taken after the liberation of Petrozavodsk by Soviet troops 28 June 1944.
This picture was presented in the evidence at the Nuremberg trial of war criminals.
The girl, who in the photo is the second from the pillar to the right - Klavdiya Nyppieva - published her memoirs many years later.
“I remember how people fainted from the heat in the so-called bath, and then they poured cold water on them. I remember the disinfection of the barracks, after which my nose was bleeding, and the steam room, where with great “diligence” they were treating all our rags, was running nose to nose. Once the steam room burned down, depriving many people of their last clothes. ” 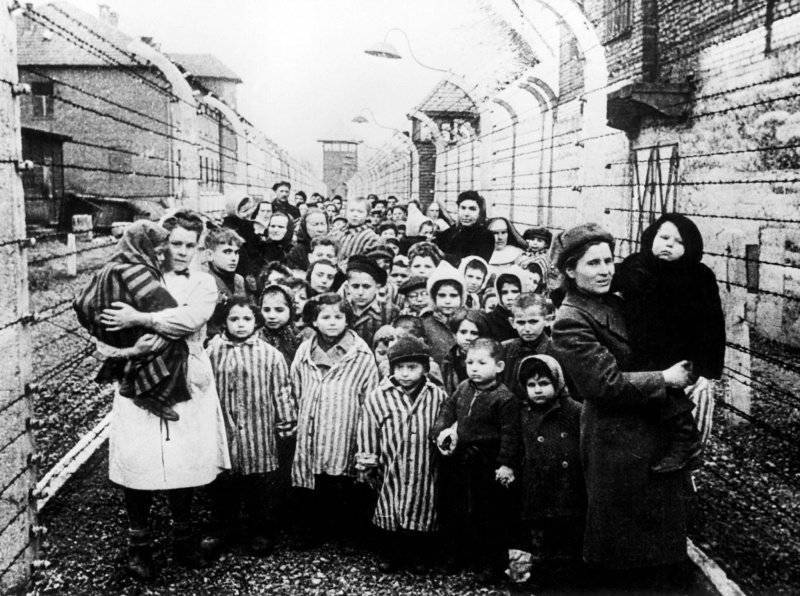 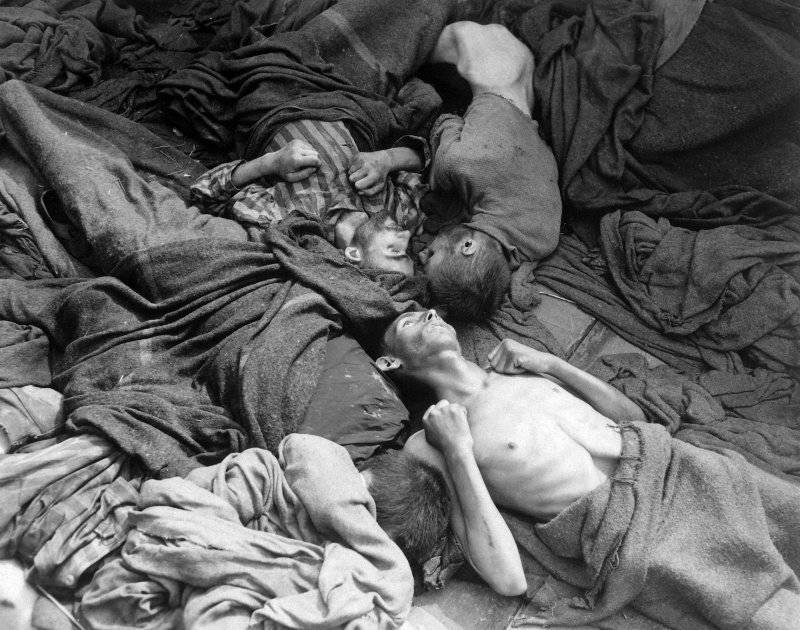 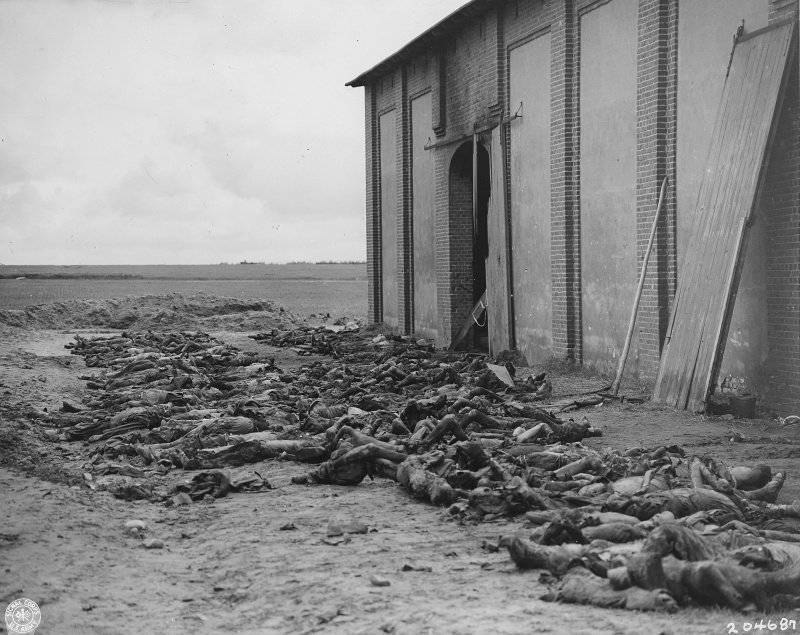 Prisoners of the Gardelegen concentration camp, killed by the guards shortly before the liberation of the camp 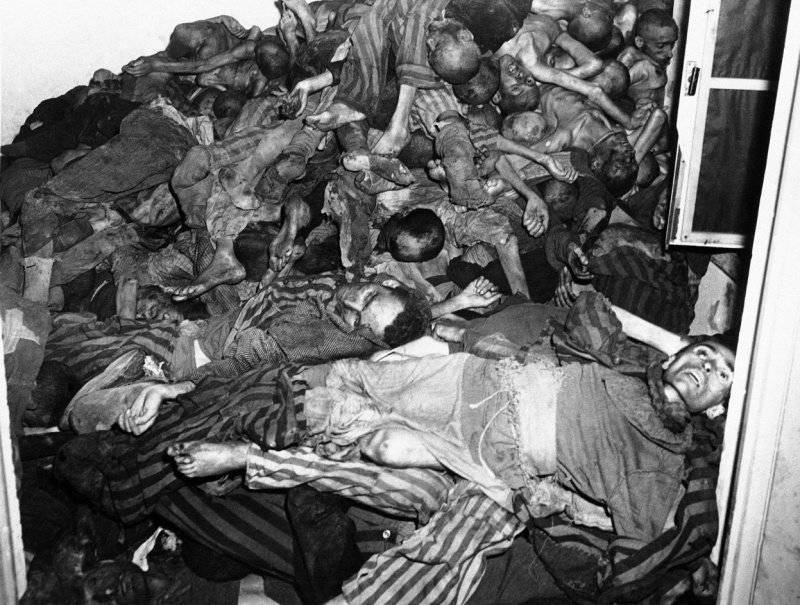 A pile of corpses of prisoners in the crematorium of the Dachau concentration camp. Bodies were found by US 7 Army troops 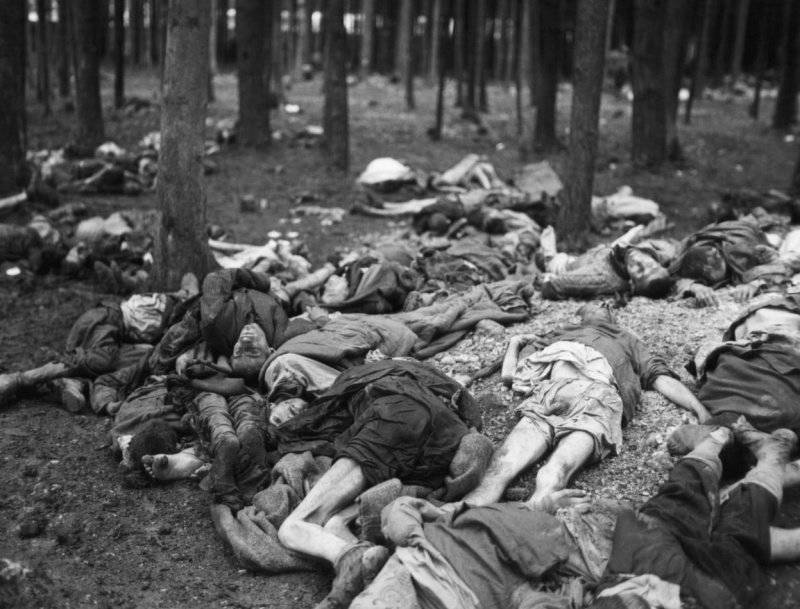 By order of the Americans, the captured German soldiers removed all the corpses of the prisoners from the Lambach concentration camp in Austria. In the forest near the camp they were buried 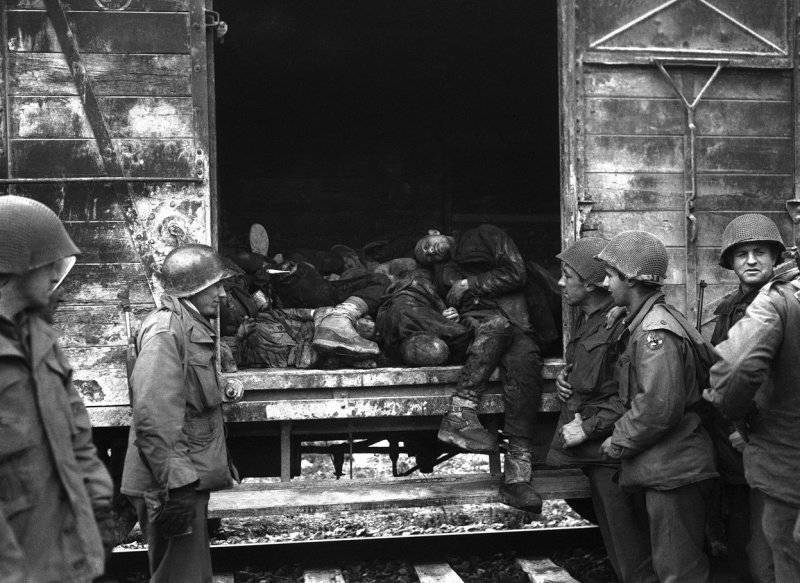 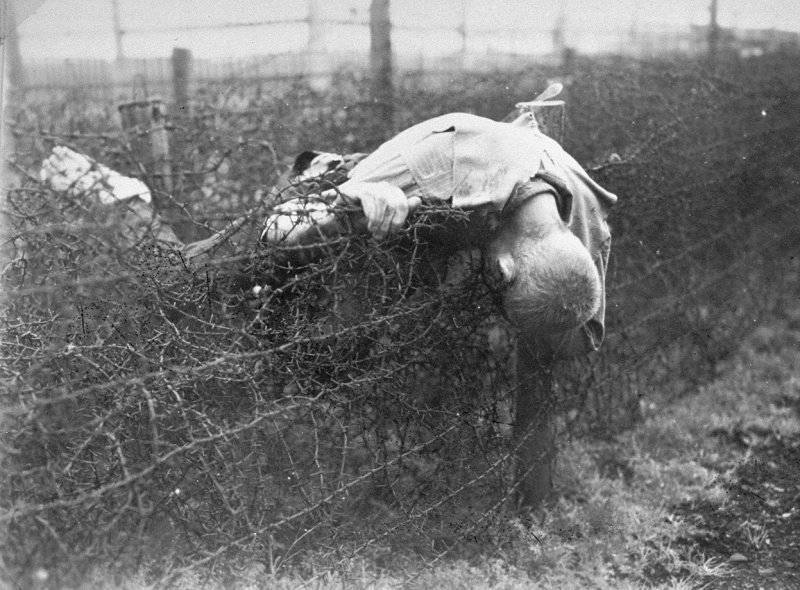 The corpse of a prisoner of the Leipzig-Tekla concentration camp on barbed wire. Leipzig-Tekla (Leipzig-Thekla) was a branch, or "subcamp" of Buchenwald 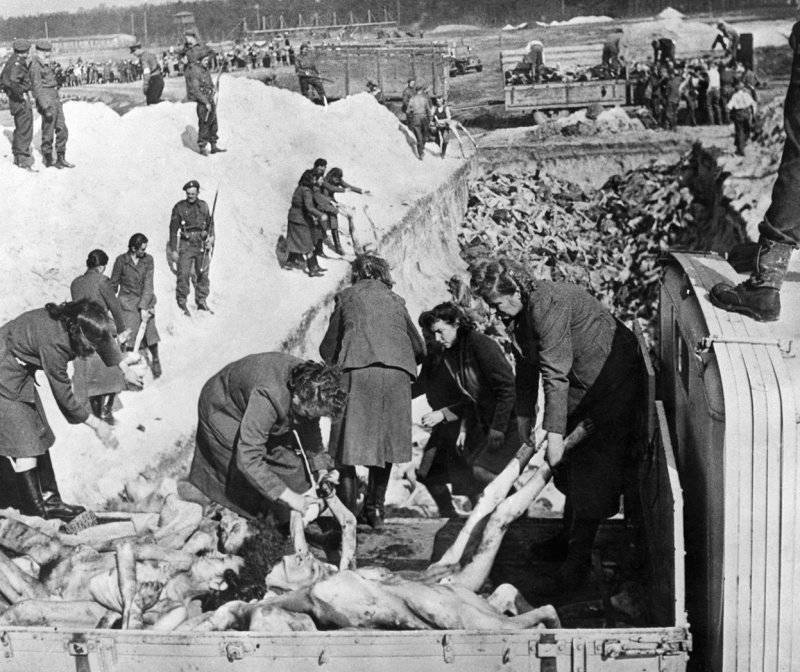 Women from the SS guard at the Bergen-Belsen concentration camp unload the bodies of prisoners for burial in a mass grave. They were attracted to these works by the allies who liberated the camp. Around the moat is a convoy of English soldiers. Former guards are forbidden to use gloves as a punishment to put them at risk of typhoid 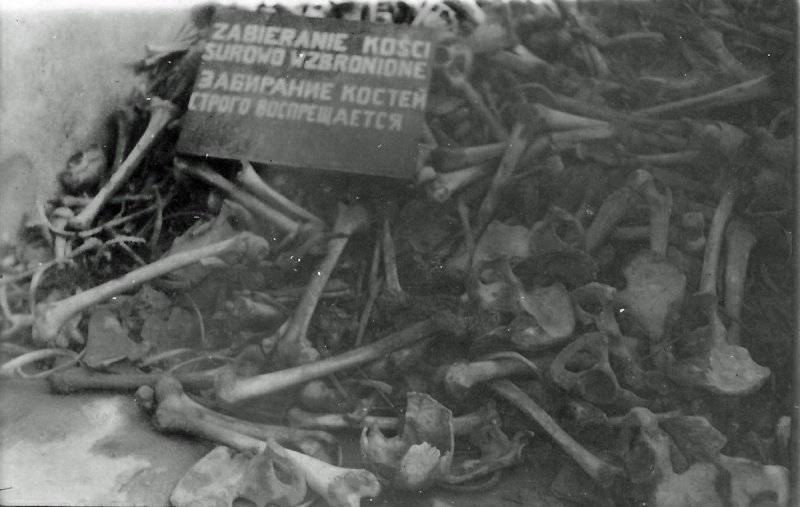 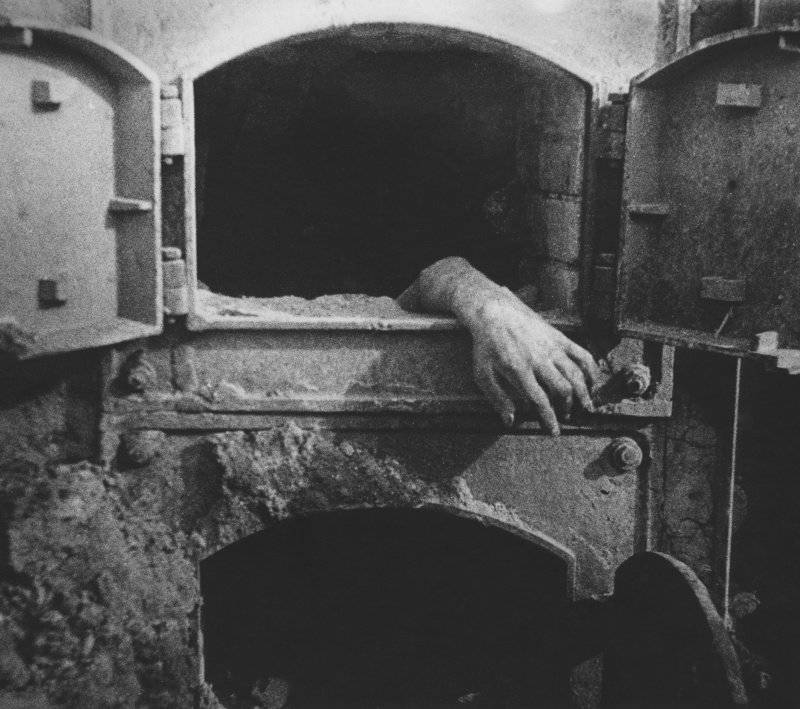 Human remains in the furnace of the crematorium of the Stutthof concentration camp. Location: Danzig neighborhood (now Gdansk, Poland) 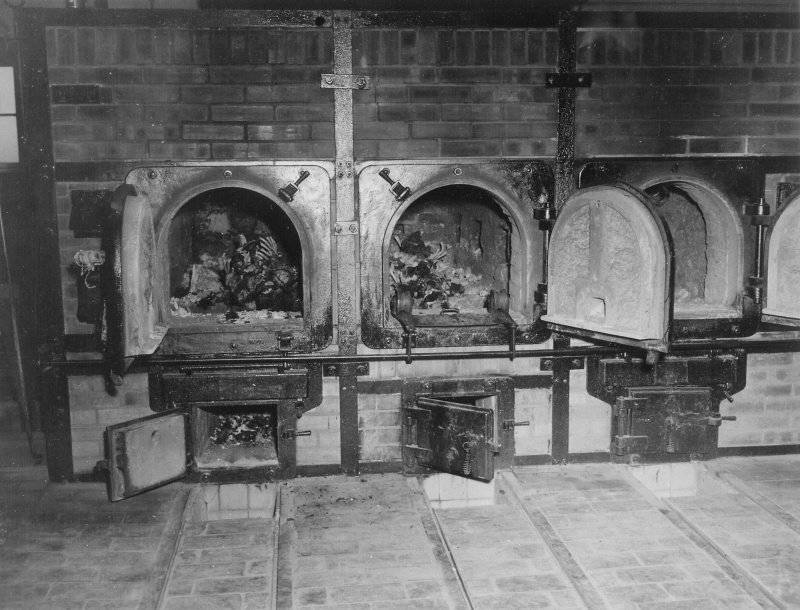 The remains of prisoners in the crematorium of the Buchenwald concentration camp near Weimar, discovered by soldiers of the 3 of the American Army 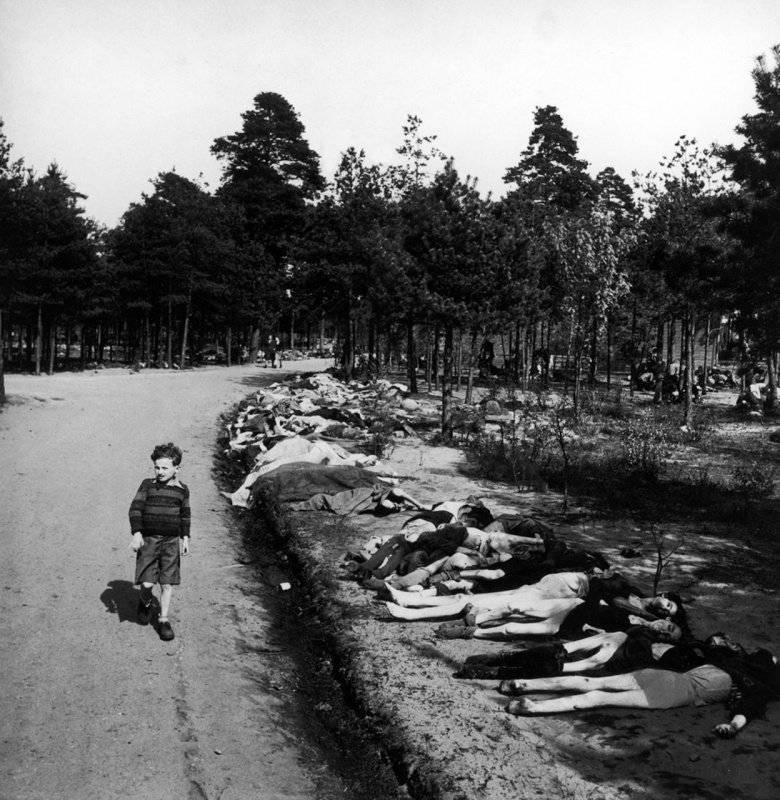 A German boy walks along a dirt road, on the side of which lie the corpses of hundreds of prisoners who died in the Bergen-Belsen concentration camp in Germany 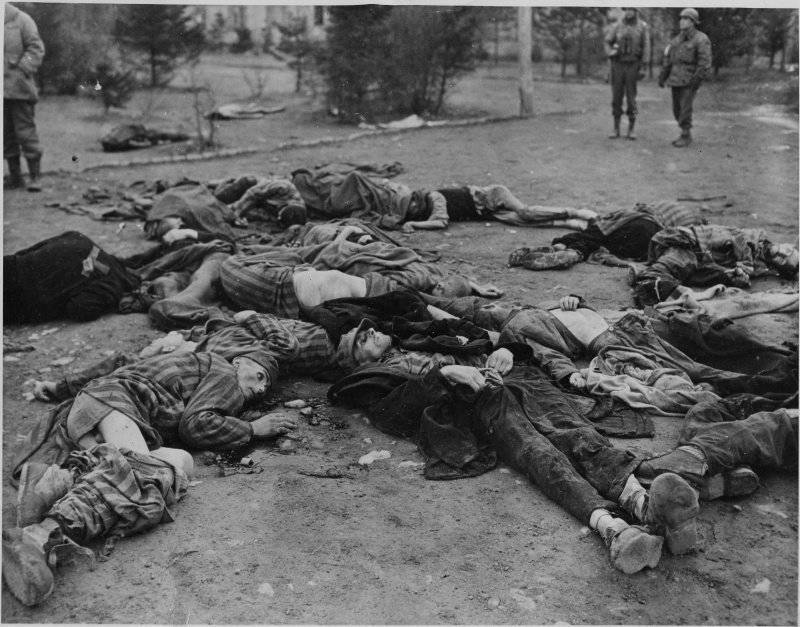 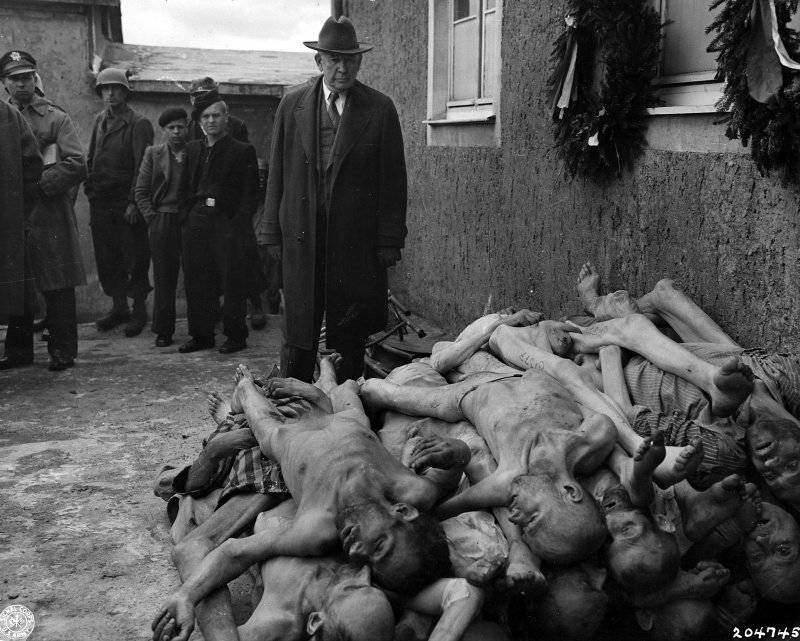 Residents of the German city of Weimar in the Buchenwald concentration camp near the bodies of dead prisoners. The Americans brought to the camp residents of Weimar, who was near Buchenwald, most of whom said they knew nothing about this camp. 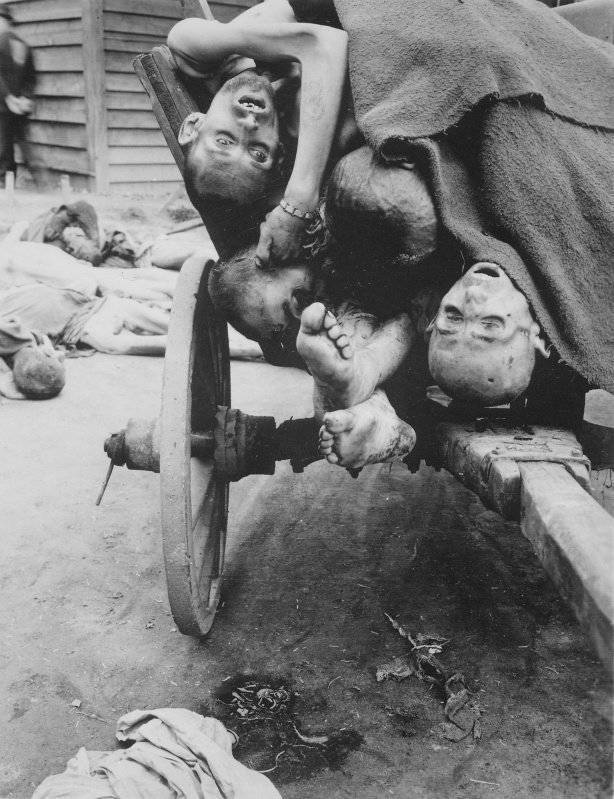 The corpses of the tortured prisoners of the concentration camp Gusen in Austria, near the city of Linz 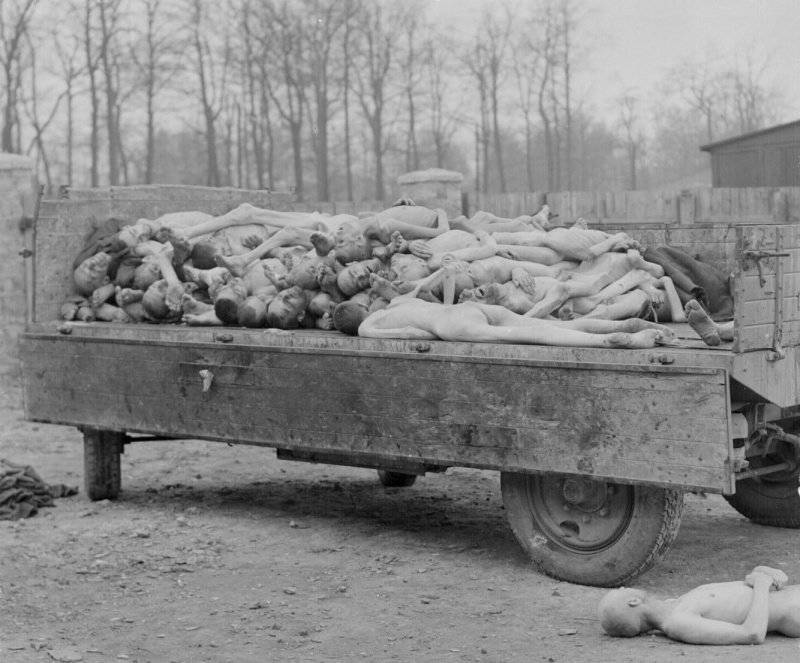 Corpses of prisoners of the Buchenwald concentration camp, prepared for burning in the crematorium 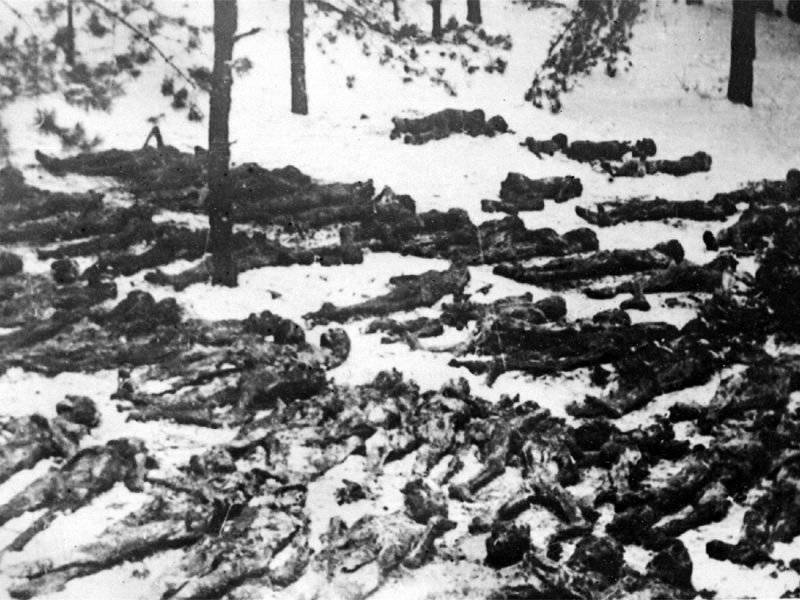 The corpses of Soviet citizens found on the territory of the Nazi concentration camp in Darnitsa. District of Kiev, November 1943 g
Ctrl Enter
Noticed oshЫbku Highlight text and press. Ctrl + Enter
We are
April 11 celebrates the International Day for the liberation of prisoners of Nazi concentration campsReports from the militia of New Russia for 7 September 2014 of the year
Military Reviewin Yandex News
Military Reviewin Google News
34 comments
Information
Dear reader, to leave comments on the publication, you must to register.