In Dagestan, a military helicopter crashed 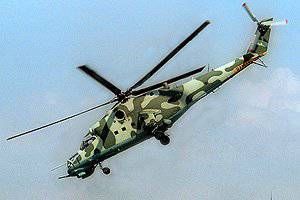 A military helicopter Mi-35, flying in fog, crashed in Dagestan. Three crew members aboard died.
INTERFAX.RU - In the area of ​​the Dagestan settlement of Botlikh on Saturday, as a result of the crash of the Mi-35 helicopter, three crew members were killed. “Today in 14: 30, near the village of Botlikh (Dagestan), the Mi-35 helicopter disappeared from the screen. According to preliminary data, three members of the helicopter crew died,” an official representative of the press service and information department of the Russian Defense Ministry reported to Interfax on Saturday . He noted that the Ministry of Defense created a commission to investigate the flight incident.
A source in the law enforcement agencies of Dagestan, in turn, said that the helicopter crashed on the administrative border of Chechnya and Dagestan in a high mountain region. "According to preliminary data, the Mi-35, which carried out the special task, in a foggy and poor visibility situation, suffered a catastrophe, allegedly clinging to the mountainside," the agency’s source said.
According to him, the search team, as well as law enforcement officers and the military, were sent to the scene, "this area has very poor visibility, and it also has difficult maneuverability, so it’s very difficult to get to the site of the crash." "According to preliminary data, in conditions of heavy fog, the helicopter crashed into a mountain near the Terrain Cold Key. A search for wreckage and crew members is underway," a source said.
Geographically, the accident occurred between the Dagestan village of Andi and the Chechen settlement Kharachoi in the area of ​​Kezenoy-am Lake.
In the security forces of the North Caucasus Federal District, the Interfax-South news agency was informed that the Mi-35 helicopter that crashed in the mountains of Dagestan was performing tasks to ensure the safe passage of a military convoy. "Considering the difficult situation in the administrative border of Chechnya and Dagestan connected with the attacks of militants, including military personnel, the crew of the helicopter crashed performed special tasks for the safe and unhindered passage of the military convoy in the high-mountainous areas," the agency’s source said. "Currently, search groups are escorted to the area of ​​the helicopter crash, accompanied by police as part of consolidated fire groups," a source said.
The flights of the Mi-35 helicopter were suspended until the causes of the crash were ascertained in Dagestan, Interfax was told on Saturday at the Russian Defense Ministry. “By the decision of the Minister of Defense Anatoly Serdyukov, Mi-35 flights have been suspended,” the agency’s source said.
Military prosecutors of the Southern Military District have already begun verification of the fact of the crash. "In connection with the crash of the Mi-35 helicopter and the death of three crew members in the mountains on the border of the Botlikh district of the Republic of Dagestan, military prosecutors of the Southern Military District started checking the laws on flight rules and training for them," the chief military prosecutor’s office said in "Interfax".
The Mi-35 helicopter is an upgraded version of the Mi-24 and is designed to destroy armored vehicles and enemy personnel, provide fire support to units of the Ground Forces and airborne troops, evacuate the wounded, as well as transport cargo in the cabin and on an external suspension. The machine is equipped with a thermal imaging surveillance system that allows you to detect and recognize objects at any time of day at a distance of several kilometers. There is a modern satellite navigation system.
This is not the first accident of a military helicopter in the area. 13 July 2010 in the mountains of the same Botlikh district, not far from the village of Andi, during the planned flight, a Mi-24 combat helicopter hooked on the side of the mountain with a main rotor and made an emergency landing, falling into a canyon. There were no victims and injuries, the helicopter was completely burned out. The crew was picked up by another helicopter.
From the beginning of the 2012, several emergency situations with military helicopters were recorded in Russia.
13 March in the Tver region, two kilometers north-west of the village of Malaya Kisilenko, an Ka-52 army helicopter fell, one of the pilots was killed, the other was seriously wounded. Later, the investigating authorities opened a criminal case under Article 351 of the Criminal Code of the Russian Federation (violation of the rules of flights or preparation for them).
July 24 helicopter Mi-8 of the military unit 42838 of the Russian Ministry of Defense crashed near Khabarovsk. The helicopter made a hard landing on an asphalt road near the village of Garovka-1, the crew performing the scheduled training flight left the cabin on its own.
August 16 helicopter Mi-28H while performing a training flight made a hard landing at the airport "Mozdok" in North Ossetia. A criminal case was initiated under Article 351 of the Criminal Code of the Russian Federation (violation of flight rules).
Ctrl Enter
Noticed oshЫbku Highlight text and press. Ctrl + Enter
We are
The collapse of the Russian aircraft Be-12 in UkraineThe accidents of military aircraft in Russia over the past 10 years
Military Reviewin Yandex News
Military Reviewin Google News
46 comments
Information
Dear reader, to leave comments on the publication, you must sign in.