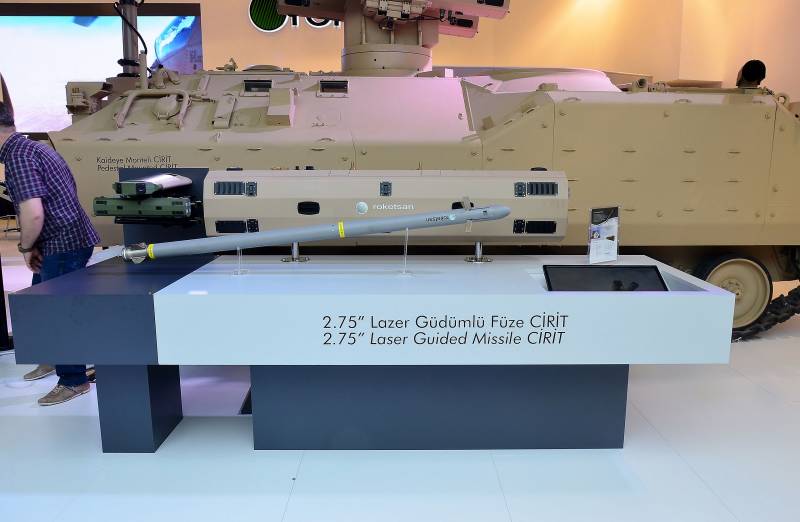 The Turkish defense industry has long been tasked with developing and producing its own types of weapons and equipment of different classes to meet the needs of the armed forces. A prominent place in such plans is occupied by the creation of our own guided aircraft weapons, incl. air-to-surface missiles. Roketsan A.Ş. plays a leading role in this direction and has shown remarkable success over the past decades.

One of the earliest developments in air-to-surface guided missiles for Roketsan was the Cirit project. It provided for a deep modernization of the serial unguided aviation Hydra 70 missiles with the replacement of some components and the introduction of a control system. Due to this, the NAR was turned into a light guided missile. Work on the Jirit project began in 2004, and by the end of the decade, the Turkish Air Force received the first serial missiles.

The Cirit project provides for the preservation of the standard 70 mm cylindrical body, along with a solid-fuel engine and a folding tail. The hull is complemented by a new head fairing, which houses a combined inertial and semi-active laser guidance system. Three variants of the warhead weighing 3 kg have been developed: armor-piercing fragmentation incendiary, fragmentation incendiary and thermobaric. 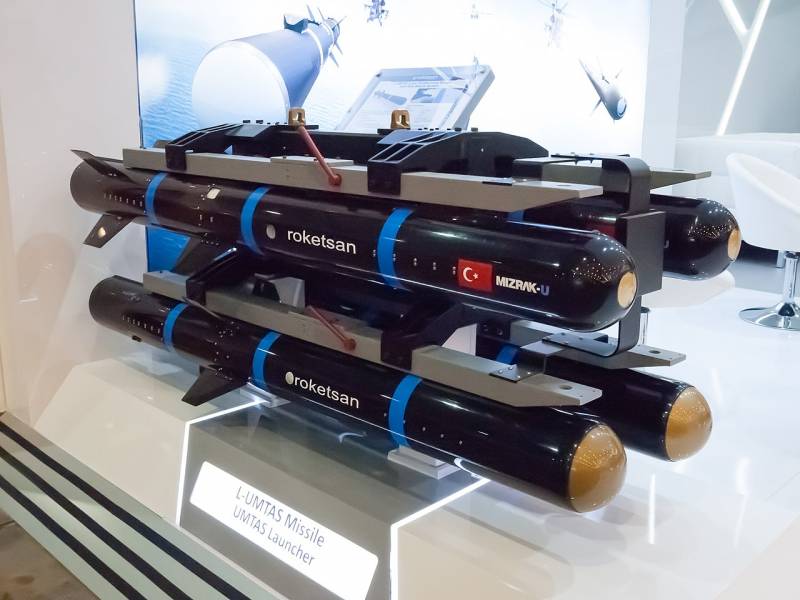 UMTAS anti-tank missiles on a standard helicopter launcher. Above suspended products with a laser seeker, below - with infrared
The Jirit missile is compatible with all standard Hydra 70 launchers and can be used with various carriers - airplanes, helicopters and tactical aviation UAVs. With the exception of the need to illuminate the target from the ground or from the air, the use of such a missile does not fundamentally differ from the NAR firing. CIRIT launchers have also been developed for mounting on land-based chassis.

The initial customer of Cirit products was the Turkish Armed Forces. In 2013, a contract was signed for the supply of an unnamed number of missiles to the UAE Air Force. Interest from other countries was reported, but new deliveries did not begin.

Almost simultaneously with Cirit, development began on a promising air-to-surface missile designed to combat armored targets at increased ranges. The UMTAS product (Uzun Menzilli Tanksavar Sistemi) was created for the TAI / AW T-129 ATAK helicopter, but the possibility of its integration with other carriers was not excluded. Work on the project was completed in the mid-tenths, and since 2016, the Air Force has been receiving serial UMTAS / Mizrak-U products.

UMTAS product launch by T-129 helicopter
The UMTAS rocket is made in a cylindrical body with two sets of planes. The length of the product is 1,75 m with a case diameter of 160 mm. The launch weight is 37,5 kg. Used solid propellant, providing a range of up to 8 km. There is a tandem cumulative warhead capable, allegedly, of striking modern Tanks.

The basic modification UMTAS is equipped with an infrared seeker; also developed the L-UMTAS rocket with a semi-active laser. There is a two-way communication with the carrier. The control equipment allows you to lock the target before or after launch, as well as retarget the missile in flight. There is a "fire-and-forget" mode. Depending on the type of target, you can choose defeat from level flight or from a steep dive.

In 2006, the Turkish Scientific and Technological Research Council (TÜBİTAK) and Roketsan began developing the SOM (Stand-off Mühimmat Seyir Füzesi) rocket family. It was proposed to create a basic product with high flight and combat characteristics, and then, on its basis, perform several specialized modifications. The SOM program has become one of the most complex and expensive for the Turkish industry. The first products of the family were put into service only in 2013.

SOM cruise missile under the wing of an F-16 fighter
The basic model of the line was the SOM-A rocket. This product is 3,7 m long and weighs 620 kg, built on the basis of an angular "inconspicuous" body with a wing span of 2,6 m in flight.

The SOM-A is equipped with inertial and satellite navigation aids that can only engage targets with known coordinates. Target data is entered into the missile before launch, there is no possibility of retargeting in flight. SOM-A delivers a 230-kg high-explosive fragmentation warhead to the target. KVO declared at the level of 5 m.

The SOM-A is based on the SOM-B1 missile. It features improved guidance tools, including an infrared head for finding a target in the final phase of flight. There is also a radio communication system with the carrier. The SOM-B2 modification practically repeats the B1 product, but differs in the type of warhead. Such a missile is intended to combat protected structures and carries a tandem penetrating warhead. 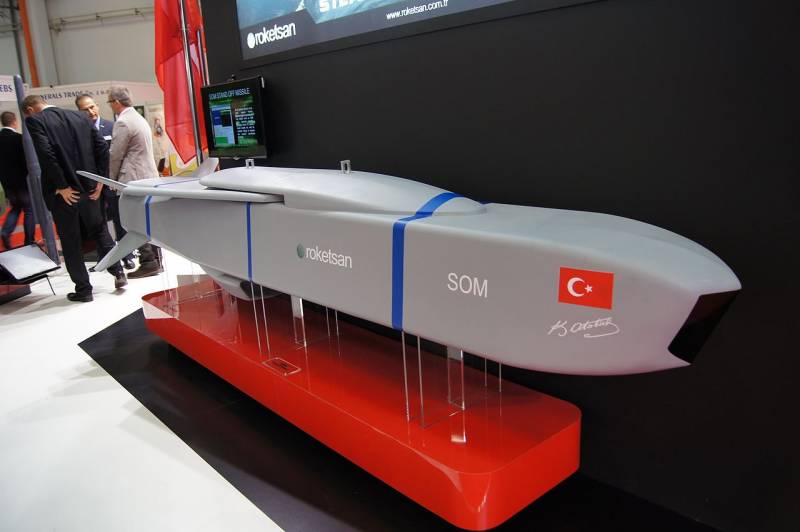 Exhibition layout of the SOM rocket
Projects SOM-C1 / 2 are under development. Their goal is to create two anti-ship missiles with different capabilities. Until recently, active work was underway on the SOM-J cruise missile (from JSF), designed to integrate with the F-35 fighter. Due to well-known events, this project was left without real prospects and was frozen.

SOM missiles can be carried by all major Turkish Air Force aircraft such as F-16 or F-4 fighters. Until recently, future F-35s were also considered in this capacity. In the coming years, the Bayraktar Akıncı strike UAV, capable of carrying relatively heavy weapons, should enter service. SOM missiles. The missile family is also considered in the context of a number of promising fighter and UAV projects.

In recent years, Turkey has shown increased interest in the direction of combat UAVs, especially for which new ammunition is being developed. An interesting example of this weapons is the Yatağan ultralight guided missile. Due to its small size and caliber, it can be used with light UAVs or with unmanned ground platforms. In addition, a standard grenade launcher can be used as a launcher.

SOM-J missile for the F-35 fighter. Will it come to real tests - it is not known
The Yatagan has a caliber of 40 mm and a length of approx. 400 mm and weight approx. 1 kg. In flight, the rocket opens up two sets of planes. The product is equipped with a semi-active laser seeker, light fragmentation warhead and solid propellant rocket. The flight range, depending on the carrier and the launch method, does not exceed 1 km.

While the Yatağan rocket is undergoing tests, Roketsan hopes for a positive completion. In addition, the developers expect the appearance of orders from both the Turkish army and the armed forces of other countries. It is assumed that the ultralight rocket, despite its limited tactical and technical characteristics, will be able to occupy an empty niche and realize its commercial potential.

In recent decades, the Turkish defense industry has shown significant growth in all areas, incl. in the field of guided aircraft weapons. A number of models of different classes and for various purposes have already been developed and adopted for service. Some of them have already been used by different carriers in real combat operations - with acceptable results. In addition, it has been able to gradually introduce new products to the international market and receive orders, although so far the commercial results have not been outstanding.

Turkey continues to develop existing projects of guided weapons and is working on new models. It is very likely that in the distant future this will make it possible to create a full range of aviation weapons and abandon imported products. However, the exact timing of the solution of such a task and the very possibility of this remain in question. Apparently, for a long time, a significant part of the Air Force arsenals will be imported samples. However, it is clear that Roketsan and other businesses will do their best to replace them as soon as possible, and the army will provide the necessary support.