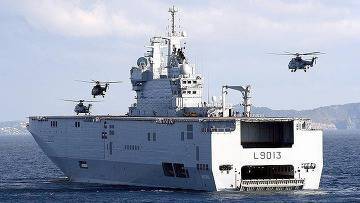 October 8 an envelope with the conditions of the tender arrived at the French embassy in Moscow. According to le Figaro, we are talking about the delivery of two amphibious ships, the organization of maintenance, recruitment of the crew and the preparation of the construction of two more helicopter carriers in Russia. Paris must answer by November 5, and in Russian. Nevertheless, in circles close to the subject under discussion, they claim that the proposal fully corresponds to what was agreed in July by France and the Russian Navy.

This turn, which has been one of the main issues of French-Russian relations for several months, will certainly be touched today or tomorrow by Presidents Nicolas Sarkozy and Dmitry Medvedev at the Deauville Summit. The long-suffering project of selling the Mistral, which from the very beginning provoked criticism from the United States and the former satellite countries of the USSR (they consider it dangerous and immoral to supply warships to the country to the aggressor in the Russian-Georgian conflict of August 2008).

In the spring of this year, Paris and Moscow began "exclusive" negotiations. It was first about the four courts, then about two, three, and in general is not known about anything. Nicolas Sarkozy, in any case, has already stated to the workers of the shipyard in Saint-Nazaire (she is now experiencing significant financial difficulties) that the matter has been practically solved. But it was not there!

In September, an unpleasant surprise awaited him. Moscow stopped exclusive negotiations with France, announced the imminent opening of an international tender and informed Paris that a new candidate, South Korea, was coming into play. The president of the republic was not slow to inform the Russian government about his “surprise.”

Rushing to the other extreme, the Kremlin immediately declared that France was still the best candidate. Unless, of course, she makes a little effort ... The current proposal of Paris was considered not attractive enough. Translation: Russia needs not only the "shell" itself, but also the means of communication, reconnaissance and navigation. That is, the very "sensitive" technologies that the Elysee Palace did not want or could not deliver (some American software falls under the ITAR standards that regulate the export and import of weapons). Another point of contention was the place where ships assembled: each side pulls the blanket over itself in order to provide support to its own shipbuilding companies.

Apparently, the French government intends to achieve the signing of this agreement (it is considered as the first stage of industrial cooperation with Russia), but what trump cards does it have to bring the game to the bitter end?

The final version of the tender involves the construction of four ships, two in France and two in Russia. However, if the French side wanted to divide them into two separate contracts, then Russia ultimately linked them in one tender. And also added a point of assistance in production, which may well mean the transfer of technology and equipment.

Since the appearance of the first difficulties, Paris has been involved in the Mistral business at the highest level. Everything related to this issue is hidden behind a veil of silence. The advisers engaged in them (in the presidential administration or the Ministry of Foreign Affairs) refuse to answer any questions. And we still don’t know anything about the results of the trip to Russia, which the head of the personal military headquarters of the French president made in the past month (immediately after the termination of exclusive negotiations).

The fact that Paris received a document with the terms of the tender does not mean that the matter has already been decided. Finances of the Russian oligarch Sergey Pugachev, who served as an intermediary between Paris and Moscow in the purchase of helicopter carriers, are now far from in the best condition. And in September, the responsible Deputy Prime Minister Igor Sechin was assigned to supervise the contract, who does not express much enthusiasm for Mistral and clearly prefers the Korean version to them. According to some reports, Moscow has introduced Spain as a tenderer and third partner. But did Madrid and Seoul receive their tender notices? All this is a secret sealed.