Tanks "IF" of different times and peoples 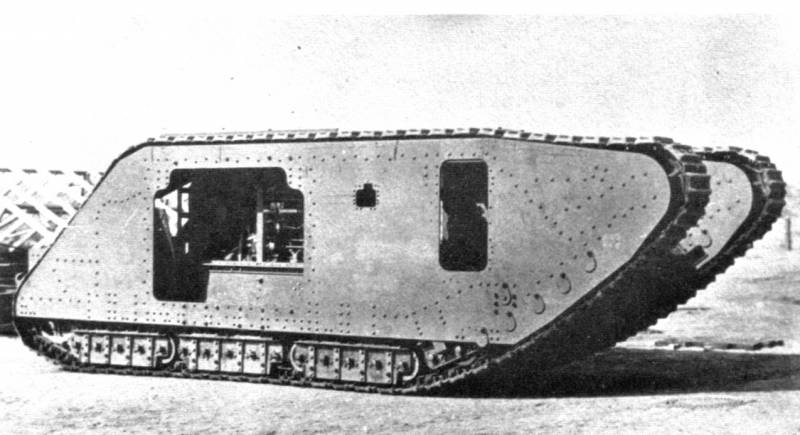 ... maybe up to fifty righteous people will not reach five,
will you destroy the whole city for lack of five?
He said, I will not destroy it if I find there forty-five.
Genesis 18:28
Tanks alternative stories. In English, “if” means “IF”. And this is a convenient word when we are talking about tanks that did not really exist, but which nevertheless could very well have been. And today we continue our story, begun in the previous article "Tanks, which could very well have been, but ... were not."

We will start, as we did last time, from "the times of these", that is, from the First World War.

When the Germans were developing the A7V, they originally planned to put 77mm infantry guns on it. But in the end, the tank got what it got.

Although it is clear that it is very profitable to have a gun on a tank that has shells interchangeable with shells of infantry guns. In addition, 77-mm, after all, is 77-mm - this is the power of a high-explosive projectile, and shrapnel and buckshot ... A shell of this gun, if it hits an English tank, would destroy it with its first hit. But no. The military said that tanks are "a new thing," but they lack such weapons in the infantry. They even felt sorry for 20 guns for the first 20 vehicles.

We know how it turned out for them.

A7V (draft) with 77mm infantry gun
Then Josef Vollmer developed the A7VU tank - the "German rhombus", so to speak.

The tank was only built in 1918, and testing began on June 25, and without sponsors. He had to arm himself again with captured caponier cannons "Maxim-Nordenfeld", captured in 1914 in Antwerp. In some ways, the tank turned out better than the British, in others it was worse. But it was not better than the A7V, and on September 12th the order came ... to dismantle it to metal!

Drawings of three more variants of this tank have been preserved, but they were not built. The tanks turned out to be above the capabilities of the German industry. She could not arrange to produce enough of them.

“Looking at this cumbersome multi-ton structure,” wrote the automobile king A. Horch about this tank, “I bitterly regretted that all the work on its creation was carried out in such a hurry.”
Then the Germans were "unlucky" for the second time.

In 1928-1929, the firms Rheinmetall-Borzig, Krupp and Daimler-Benz produced six experimental Grosstraktor tanks. Since the Versailles Treaty forbade Germany to have tanks, all vehicles were sent to the USSR to the Kama training ground near Kazan, where they were tested. The Daimler-Benz prototypes covered only 66 km. But the tanks "Rheinmetall" - more than 1200 km. It was concluded that the drive wheel should be in front, but in general the tanks were considered unsuccessful. Although on the highway, their speed reached 44 km / h.

As a result, two tanks became monuments at the barracks of German units, and the rest were sent to be melted down during the war years. 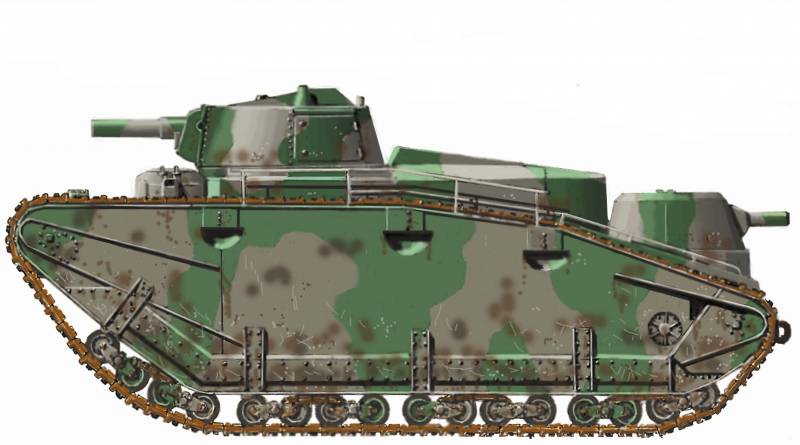 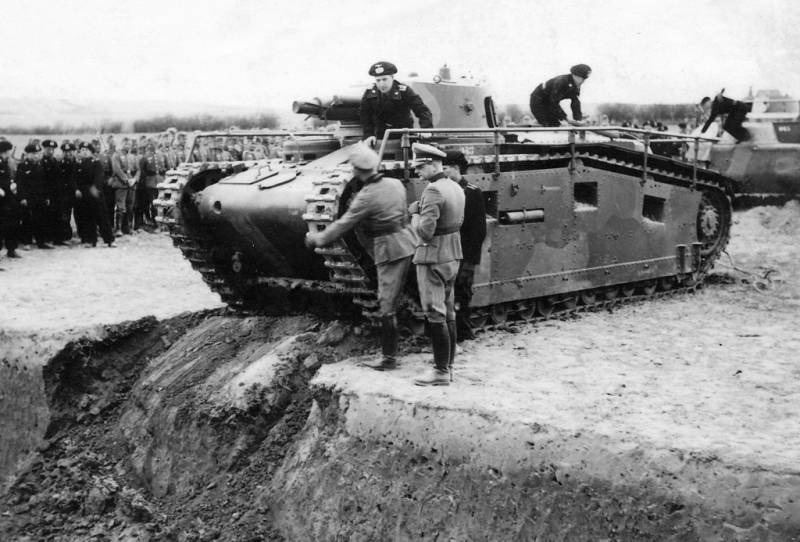 Tank "Grosstraktor" of the firm "Krupp" No. 43 at the summer exercises in 1935
It should be noted that the German designers managed to create interesting projects of combat vehicles. Moreover, especially during the Second World War. But ... the country's economic opportunities did not allow, as before, to implement them. 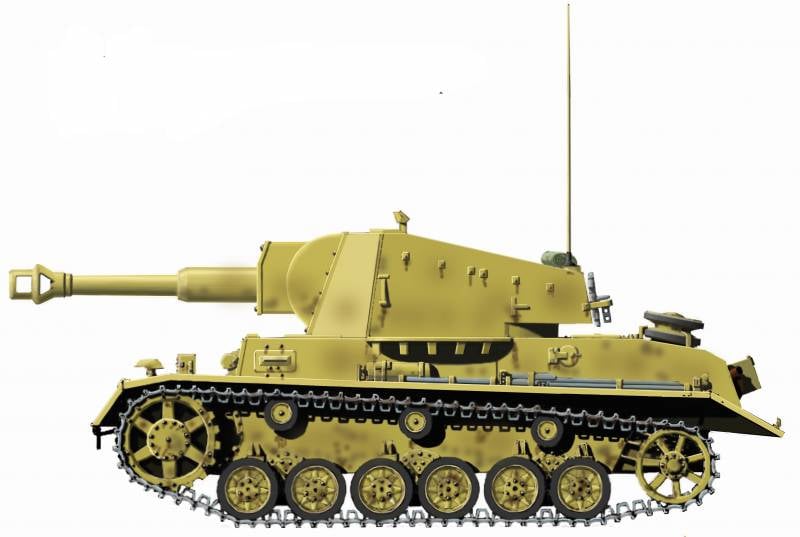 The highlight of the design was the removable turret, which could shoot from a shortened tank chassis from the T-IV and, at the same time, be towed by other vehicles and installed as a bunker. The start of production was scheduled for February 1945, three copies were released. And that was the end of it. 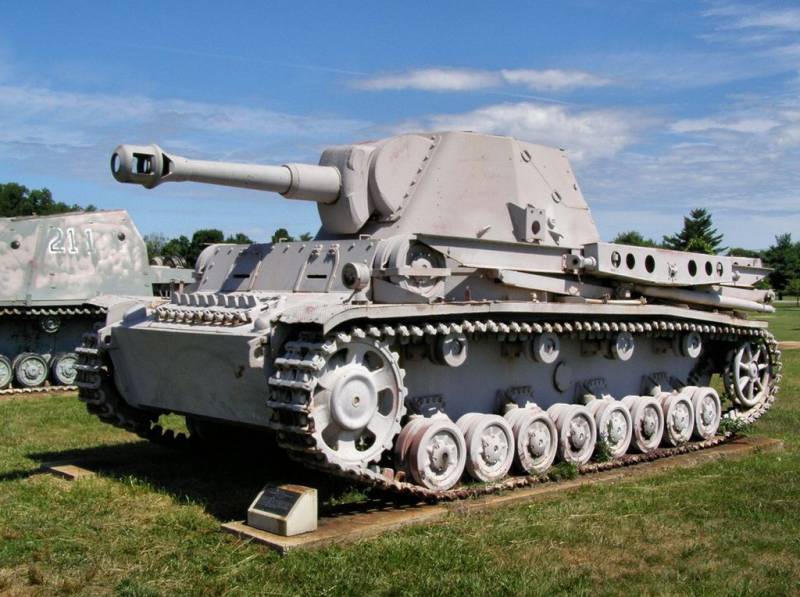 "Heuschrecke 10" at the Aberdeen Proving Ground in the USA
And the Germans also had a passion during the war years to come up with as many different uses as possible for a successful chassis. The most striking example is the chassis of the Czech 38t tank, on the basis of which a number of vehicles were produced, and they planned to produce even more. So, in addition to the well-known self-propelled guns "Hetzer" ("Jaeger"), it was planned to produce the same machine, but with the designation starr (German starr - "rigid" or "fixed").

"Hetzer-STARR"
The essence of the idea is in the rejection of recoil devices and a rigid mount of the gun in the body. Benefits: high rate of fire due to lack of time to roll-out the barrel, increase in the fighting compartment. A "recoilless gun" with a rigid mount can shoot much longer, since its temperature regime is due only to the washing away of the rifling and the possibility of igniting the propellant charge in the sleeve before the bolt is closed. But all this can be easily avoided by intensively cooling the barrel with water. The Germans did not have time to launch.

But in the USSR, the model was considered promising. Several prototypes of the Hetzer-STARR self-propelled guns were assembled, tested and something was taken for the I-100 100-mm turret installation, designed in 1955. The self-propelled gun itself "did not go".

In general, the Germans planned a whole "bunch" of combat vehicles on this chassis.

Gerät 547 is a self-propelled gun similar to the Hetzer, but with a 105 mm howitzer.

Aufklärungspanzer 38 (d) with a 75-mm gun on a pedestal mount
Aufklärungspanzer 38 (d) is a reconnaissance tank with four weapon options.
Bergepanzer 38 (d) - ARV for units with military equipment based on 38 (d) vehicles.
Gerät 587 is a versatile light armored gun platform designed to transport 88mm and 128mm anti-tank guns and 105mm and 150mm howitzers by strengthening and lengthening the base chassis, with full or partial armor armor with circular fire. A four- and five-wheel chassis was planned. Moreover, one of the self-propelled guns was supposed to even have a rising wheelhouse with a gun. 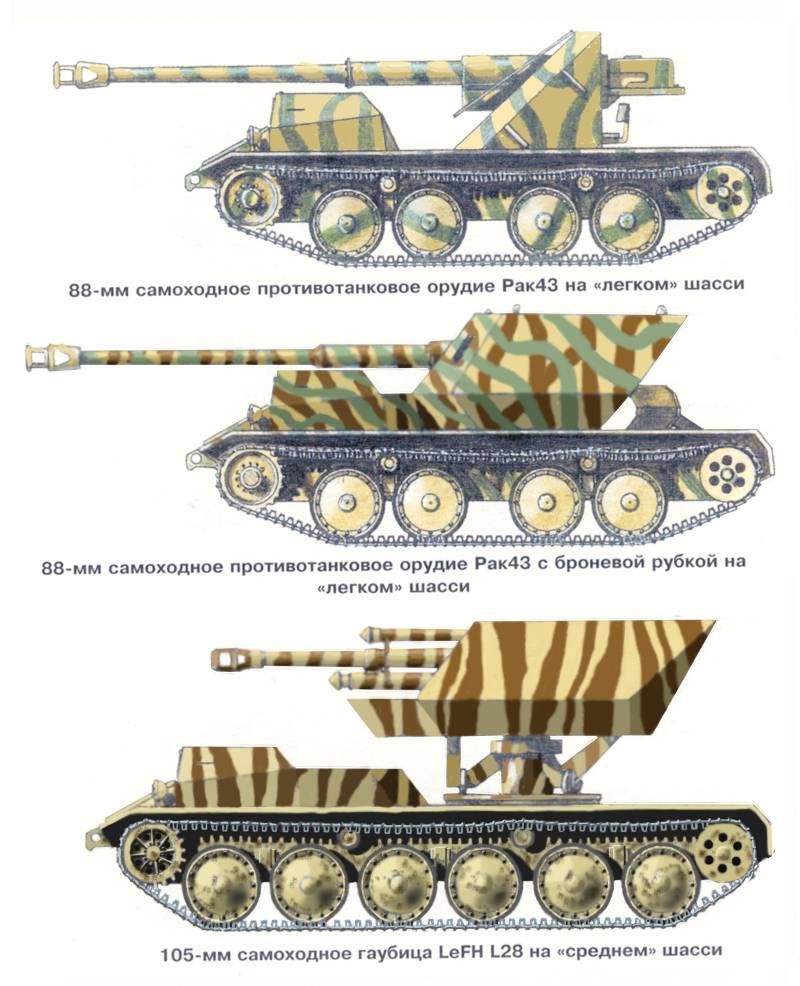 ACS on "light" and "medium" chassis 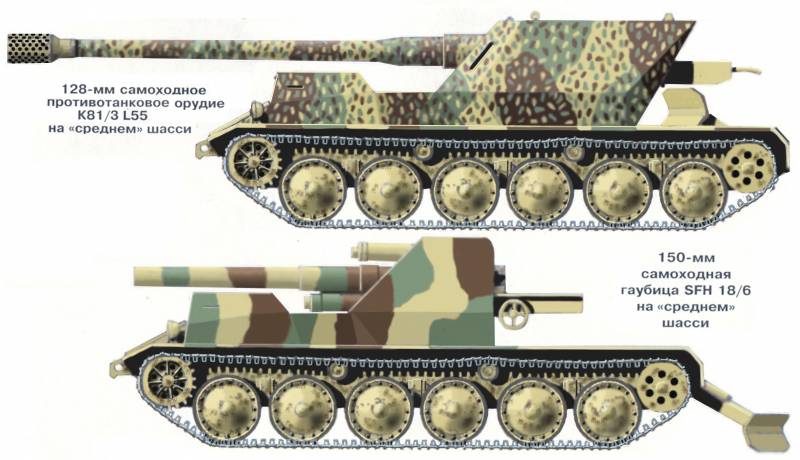 ACS on "medium" chassis
It was also planned to produce the Gerät 589 - an assault gun armed with a 280-mm mortar - something clearly from the realm of fantasy.

Jagdpanzer 38 (d) tank destroyer with RAK ​​43 cannon
The Halbgruppenfahrzeug project was also created - an infantry fighting vehicle with a 20-mm automatic cannon, designed for eight infantrymen and three crew members.
The anti-aircraft self-propelled gun "Kugelblitz" (German Kugelblitz - "ball lightning"), armed with two 30-mm automatic cannons, was manufactured, but did not have time for the war.

One of the projects was to first cross the turret from the T-IV tank with the chassis of the 38 NA tank. And then completely put on it a Schmalturm turret ("reduced") with a 75-mm gun and a barrel length of 48 calibers. It would seem that here it is - a cheap and convenient in all respects tank of "total war". The Germans did not think of this in 1942, and when they did it in 1944, it was already too late to "start" with him 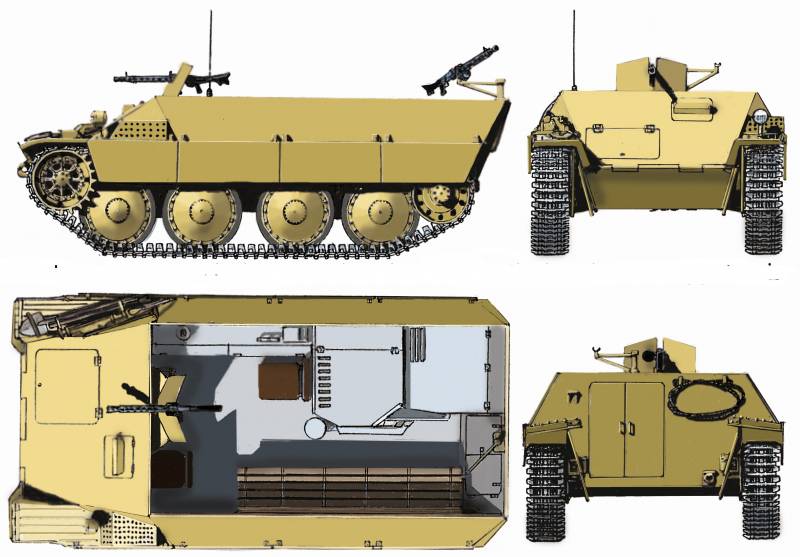 We also managed to make two prototypes of this vehicle: the Kätzchen armored personnel carrier (“Kitten”) on the 38t chassis, 6-8 airborne troops and two crew members
Moreover, it should be noted that, although the production of tanks and self-propelled guns at German factories during the war was continuously reduced, in the Czech Republic, the production of the Hetzer self-propelled guns at the VMM (formerly Praga) factories, on the contrary, was constantly increasing, since these factories aviation the allies did not bomb. As a result, they retained their production potential for the needs of ... socialist Czechoslovakia.

What else let down the German designers was the constant desire to create a kind of "super car". And with her, for sure, to defeat any opponent. They had good recoilless guns, and immediately they began to put them on tank chassis. Real monsters appeared, for example, an SPG with a 240-mm "recoilless", capable of destroying any tank with one shot, but ... in practice, it turned out to be not so good at all.

In any case, there was a project, but it did not come to serial production. 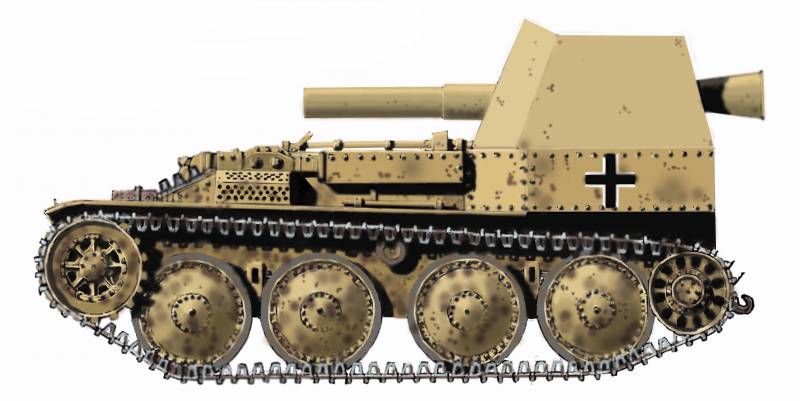 Experienced self-propelled gun with a 240-mm recoilless gun
The T-III tank with the 75/55 mm bicaliber gun was also unsuccessful. The idea itself seemed to be not bad: when using a tapered barrel, provide the tank with a weapon with extremely high armor penetration.

But in fact it turned out that "the game is not worth the candle." First, the barrel quickly wore out and accuracy fell. Second, the shells were expensive. And thirdly, it turned out that the tank most often shoots not at the tanks, but at the infantry. This means that he needs shells with a large charge of explosives, which could not be placed in bicaliber shells. By the way, for the same reason, T-34/57 tanks did not go to our army either. They knocked out tanks well, but fought poorly with the infantry.

Experienced tank with a cannon with a tapered barrel

Tank E-75 with an 88-mm gun with a barrel length of 100 calibers
By the end of the war, the Germans had developed a very interesting tank concept: a series of tanks "E" (experimental): E-5, E-10, E-25, E-50, E-75 and E100 - only six vehicles, and the numbers indicated their weight ... To confidently defeat enemy tanks, it was planned to install an 75-mm gun with a long barrel on the E-88 tank - just to disperse the projectile to the highest possible speed. But it's one thing to create one such experimental gun and chassis, and quite another - many such guns and many such tanks.

In reality, the "E" series did not see the light.

Using the chassis of the Tiger and Royal Tiger tanks, the Germans planned on their basis a number of self-propelled guns, designed in such a way that their chassis could be used for different gun mounts. Work began in June 1942, but by the end of the war only one of them had been built and tested.

Gerat 809
In this case, the barrels were automatically raised to an angle of 40 ° for loading. The weight of the installations was 58 tons. The crew was 7 people.

I must say that the experience of the self-propelled guns "Ferdinand" was beneficial to their creators, and on these machines defensive machine-gun armament from MG-34 and MG-42 machine guns was provided in the frontal sheet of the hull. The maximum thickness did not exceed 50 mm. The machines turned out to be quite good, but how, where and against whom were the German generals going to use them?

Gerat 810
True, let's pay tribute to the German designers: they could turn any tracked chassis into a platform for a cannon. For example, the chassis of the Ost caterpillar tractor by Steyr. On its basis, a self-propelled gun was made, equipped with a PAK 40/1 7,5 cm cannon. Fully open, covered with armor only in front and a gun shield, utterly primitive - that was the design. And yet they fought on it!

Hitler himself liked the car. It was cheap, durable and had a high ground clearance, that is, good cross-country ability. True, it was necessary to shoot from it while sitting on the floor, since there were no seats provided for the calculation of the gun. But until the end of the war, only 60 vehicles of this type were produced. 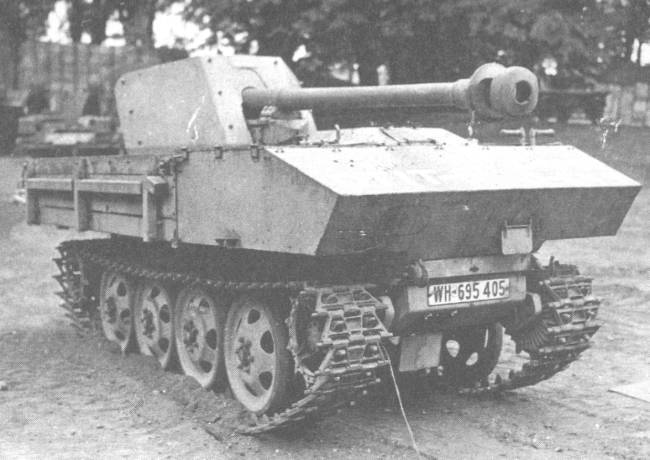 And the same self-propelled gun - a wartime photo

All color illustrations are made by A. Sheps.

Ctrl Enter
Noticed oshЫbku Highlight text and press. Ctrl + Enter
We are
Is the "old" well forgotten to become the "new"? Part-2. At the call of honor and dutyThe fire control devices of the Soviet and German tanks of the Second World War. Myths and Reality
Military Reviewin Yandex News
Military Reviewin Google News
20 comments
Information
Dear reader, to leave comments on the publication, you must sign in.