Reconstruction of the Baltic naval base is nearing completion 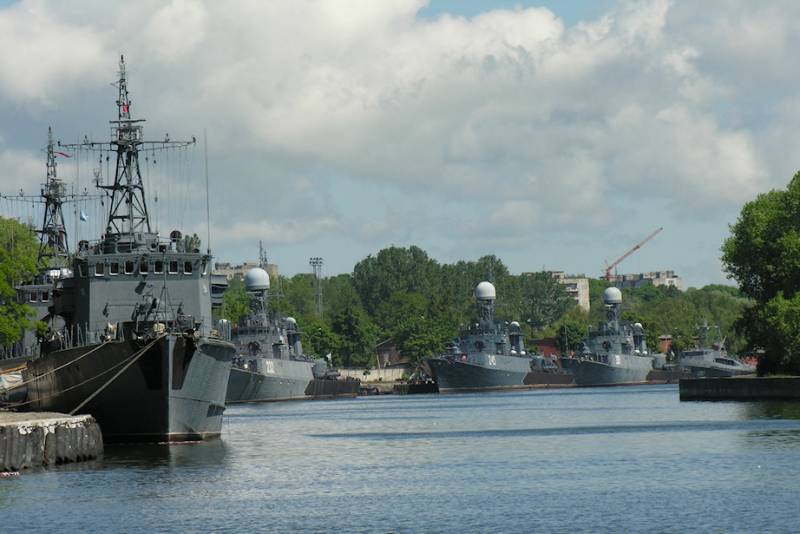 Ships DKBF at one of the berths of the Baltic naval base, 2010

Since 2012, the program of reconstruction of the naval base in the city of Baltiysk (Kaliningrad region) has been continuing. In 2015, the first stage of the program was completed, after which construction organizations began to implement the second. According to the latest news, the current work schedule provides for the completion of the last facilities by the end of 2021. Thanks to this, the Baltic Naval Base will acquire its final form and receive all the necessary capabilities.

On March 1, 1956, an order was signed by the Minister of Defense on the formation of a new first-class naval base in Baltiysk. She was supposed to become one of the main bases of the Red Banner Baltic fleet and ensure its access to the southern part of the Baltic Sea. The base was built on the basis of existing coastal infrastructure facilities; later they were reconstructed and supplemented or replaced with new ones.

At different times, various divisions and brigades of ships and boats for various purposes, parts of coastal troops and logistical support served on the Red Banner Baltic naval base. The composition of the units and formations at the base was regularly changed in accordance with the current tasks and needs of the Baltic Fleet. 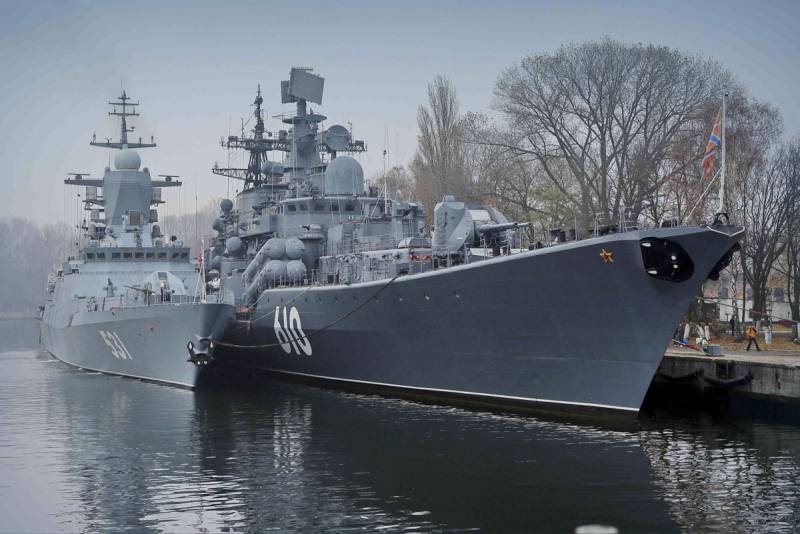 Due to various reasons, not all objects of the Baltic Navy have undergone the necessary repairs and restoration in a timely manner. So, at the turn of the two thousandth and tenth years, during the engineering survey, it was found that the base's berths were in disrepair, and their equipment, at least, imposes serious restrictions on the operation of warships, boats and ships, incl. modern.

It was decided to carry out a full-scale reconstruction of the naval base with the restructuring of some of the facilities, replacement of worn out communications and networks, etc. The work started in 2012 and was carried out by several state organizations, including Spetsstroy. According to the plans of that time, all events were to be completed no later than 2020.

In accordance with the reconstruction plan, construction organizations had to dismantle various structures that could not be repaired, as well as build new ones. In parallel, other facilities were being repaired. It was supposed to restore or rebuild more than 3 km of the mooring front, as well as to carry out work on a large number of land facilities for various purposes. To ensure the service of new ships of different types and ranks, the bottom was deepened - more than 1,3 million cubic meters of soil had to be raised. 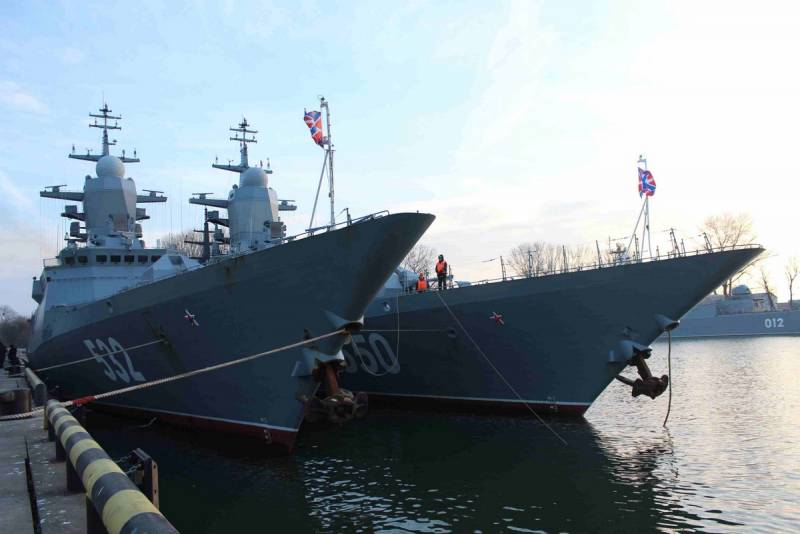 Corvettes pr. 20380 "Boyky" and "Guarding" at the modernized pier, December 2020
The first stage of reconstruction of the Baltic naval base was completed in the fall of 2015. It was reported that by this time several berthing facilities with a total wall length of more than 1,6 km had been rebuilt. On an area of ​​about 20 thousand square meters, more than 300 thousand cubic meters of soil were raised. New buildings appeared on the shore for the headquarters of naval formations, training facilities, etc.

As reported, dismantling and construction work was generally on schedule. However, they often had to be interrupted: in the Baltiysk region, on land and at sea, there were still a lot of ammunition from the times of the Great Patriotic War, which required neutralization.

In the fall of 2016, the Ministry of Defense and Spetsstroy disclosed the details of the begun second stage of reconstruction. The main task during this period was the construction of new berths that meet the requirements of modern ships and have all the necessary communications. The deepening of the bottom continued in new areas.

The original plans to complete the renovation in 2020 were not fulfilled. However, by this time, almost all the main work had been completed. In August last year, it was reported about the successful completion of the overhaul of the berthing facilities. Almost required objects have been restored or rebuilt, as well as work has been carried out on the access roads. Almost all communications of the berths have been re-laid. The necessary funds have appeared on the shore, from power substations to wastewater treatment plants. 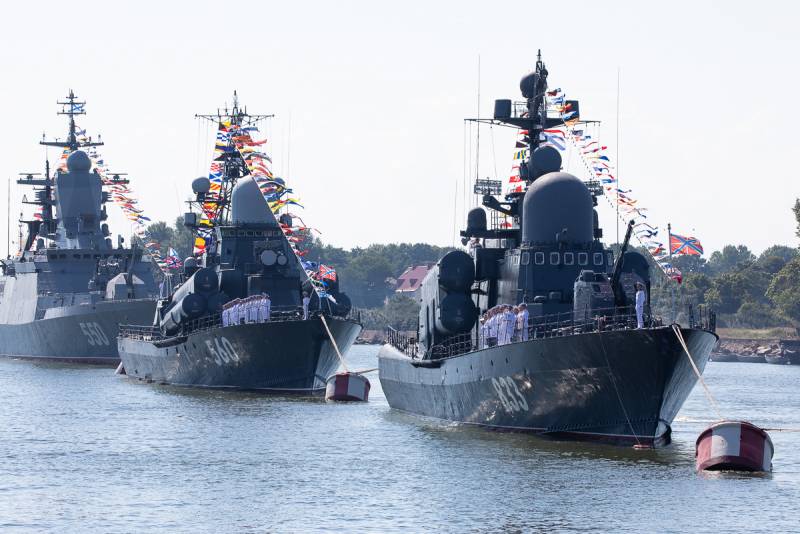 Naval parade in the Baltic naval base, 2018
As a result, all possibilities for basing ships were provided with an increase in energy efficiency and environmental safety. In the near future, it was planned to complete the construction of the remaining facilities, complete the second stage of reconstruction - and the entire program as a whole.

In January 2021, the Ministry of Defense revealed new details and clarified plans. By this time, a complete replacement of communications took place at 16 berths out of 20 available. More than 3 km of the mooring front was renovated and other activities were carried out. Commissioning work continued at infrastructure facilities. The last funds of the base were going to be commissioned by the end of the year.

On July 29, Izvestia, citing its source in the Ministry of Defense, confirmed plans and a schedule to complete the reconstruction this year. However, it is not ruled out that some work will have to be completed as early as 2022. However, in any case, a complete renovation of the main base of the Double Red Banner Baltic Fleet is a matter of the near future.

The reconstruction of the Baltic naval base has two main goals. The first is the preservation of the key facility of the DKBF, which ensures the activities of several ship and coastal formations. Over the decades of active operation, the infrastructure of the base has worn out, some of the facilities have reached an emergency state. Now it has been restored and supplemented with new objects. 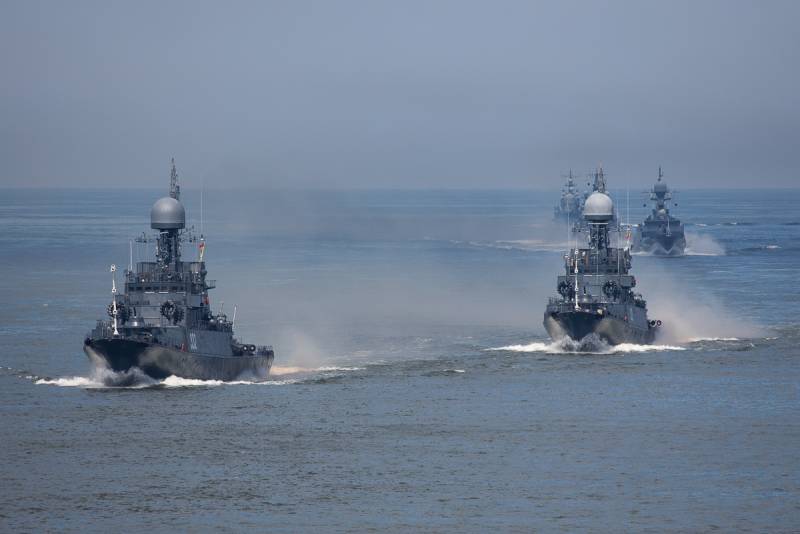 The second goal is to expand the capabilities of Baltiysk for the basing of warships and auxiliary vessels. New communications and facilities have been improved and strengthened taking into account the requirements of the operation of large ships, high-ranking combat units and modern technology.

Such opportunities are already being used. So, it is in Baltiysk that there are four corvettes of project 20380, attributed to the 2nd rank. In the near future, after repairs, the destroyer Nastoichivy pr. 956A, the flagship of the Baltic Fleet and its only 1st rank ship, will return to the base. It should be expected that in the future, as the shipbuilding program continues, new combat units of all main classes and different ranks will appear at the berths of the Baltic naval base.

Due to the restructuring of most of the facilities, the conditions of service for personnel have been improved. New training facilities have been built to improve the efficiency of training.

The Baltic Fleet has several basing points at its disposal, divided between the Baltic and Leningrad naval bases. In this case, the main base of the fleet is the Baltic. It has a number of features that determine its special value for the Baltic Fleet and the Navy as a whole. 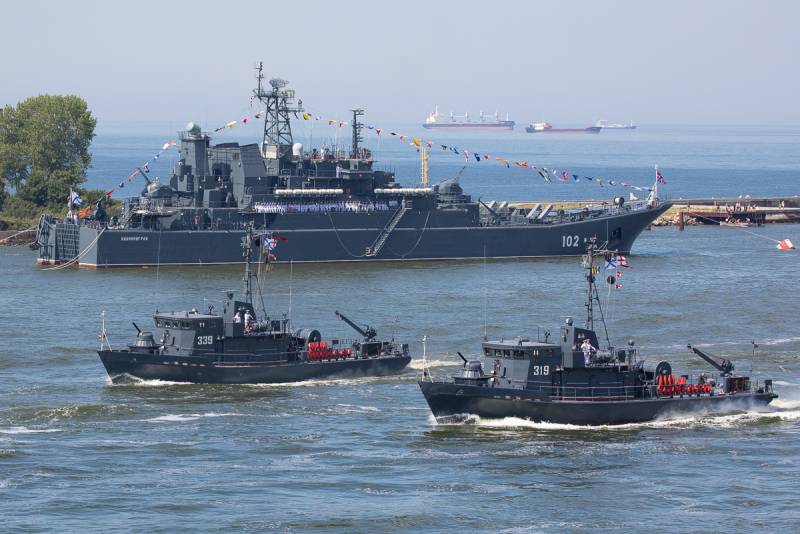 It is in Baltiysk that most of the DKBF ships serve. The base provides direct access to the Baltic Sea, without the need to cross the Gulf of Finland. At the same time, it is located on the territory of the Kaliningrad region, separated from the main part of the country, which imposes some restrictions, but expands operational capabilities.

In fact, the state and capabilities of the Baltic naval base have a decisive influence on the potential of the Red Banner Baltic Fleet, and also determine the capabilities of the Russian armed forces in the region. The absence of such a base, its ships and coastal units, would seriously complicate activities in the Baltic Sea and nearby regions - and could negatively affect the organization of the defense of the country's western borders.

As a result of several decades of active operation, almost all objects of the Baltic naval base were worn out, which became an indirect threat to the security of the Kaliningrad region and the western borders. In recent years, the infrastructure of the base has been restored and rebuilt, which allows not only to get rid of such problems, but also to increase the potential of the Baltic Fleet.

Thus, the reconstruction of the Baltic naval base is one of the most important modern military construction projects. The restructuring and modernization program also turned out to be one of the most lengthy, complex and expensive, but all efforts are already paying off thanks to the expansion of the base's capabilities and the growth of its potential in the context of protecting the country's maritime borders.

Ctrl Enter
Noticed oshЫbku Highlight text and press. Ctrl + Enter
We are
The role and prospects of military groups in the regions of semi-cliquesAbout disbat
Military Reviewin Yandex News
Military Reviewin Google News
8 comments
Information
Dear reader, to leave comments on the publication, you must sign in.