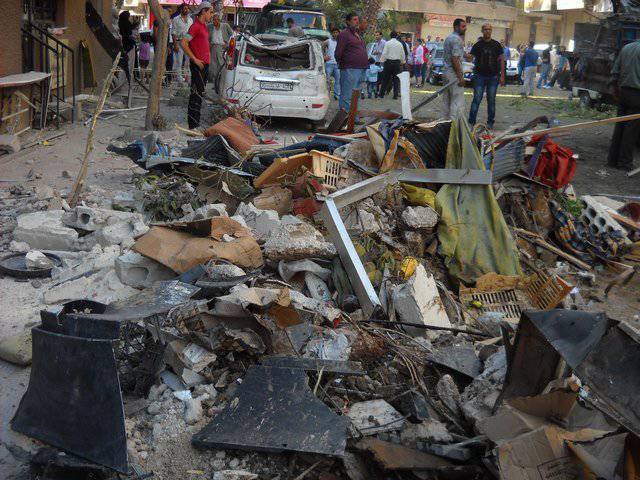 Earlier, the Syrian "freedom fighters" said that they are fighting for the people, and they are fighting the army. And although this is absurd, since the army is part of the people, but at least they tried to keep their face before the Western public. Previously, they blew up predominantly military installations, police buildings, and government offices. Of course, civilians also died - more than 10 civilians died in the 60 bombing attack in May alone, although the attack was formally directed against the military intelligence building, and people who were driving in their cars and were killed by an explosion of an explosive machine substances in TNT equivalent was more than a ton), apparently, were listed among the militants as “collateral victims”.

Since then, the Syrian authorities have increased the protection of military and other important objects. Of course, it will not be possible to protect oneself from all attacks against them, but it has become much more difficult to commit them.

And the militants have already turned to the tactics of terror directly against civilians.

3 September in a suburb of Damascus Jaramani, right among the houses there was a powerful explosion.

There were no military facilities, no police, no government agencies. There were residential buildings. So what could be the target of the terrorists? In addition to the killing of civilians living quietly in this quarter? That was exactly their goal - so the overlooked pseudo-revolutionaries are taking revenge on civilians for not joining their rebellion.

A few houses suffered badly. Balconies fell to the ground. The window frames fell straight to the people on the bed. In some apartments there are icons: many Christians live in the area.

We go along the stairs of the dilapidated house. A person speaking Russian lives in one of the apartments. Often been in Moscow. Among the chaos caused by the explosion - several books in Russian.

Saved by a miracle. Sat on the couch, worked with a laptop. Barely managed to bounce. Just a little bit - and the window frame, torn out "with meat", would fall directly on him.

Says:
- Grandmother and granddaughter played here. Another boy right next to this bus was. Suddenly, a neighbor says that the car seems to be dangerous - a stranger, an unfamiliar, somehow strangely parked. And she really rushed. Both the girl, and the boy, and the neighbor died. Who needs such a revolution? And I want to ask these "revolutionaries" - and if there were your mothers, your children?

He shows the injured house. In the basement there was a music club and cafe. Now on the stage - broken glass, tables and chairs crumpled.
“And there,” says the same local resident, pointing to a completely destroyed apartment in the next house, “there lived a large family of refugees from Iraq. Literally on the eve moved out. Fate saved them.

Indeed, the apartment was blown so that if someone was in it, it would hardly have been possible to survive ...

Residents sit on dilapidated balconies. Nobody cries, everyone keeps steadfastly. I note that no one mourns the property - since Syria is a socially-oriented state, people know that they will not be left without help.

Investigators examine the miserable pieces of iron left over from the bus itself that exploded. There are a lot of crumpled cars around ... To build a house, equip an apartment, save up for a car - years of work are needed. To destroy the created by others - enough for one second.
In a nearby shop, having learned that Russian journalists arrived, they are giving you juice for free. The shop has also suffered - part of the food is now lying on the ground. They kept canaries - one cage with two birds survived. Two other birds were killed in the explosion, and fragments of the cage lying on the pavement. Another innocent victim of the attack.

People want to live, want to go to work, want to sit on the balcony and drink tea in the evening, want to raise children and play with them, want to keep canaries - and they have enough of the freedom they have, and don’t have to shed some other "freedom" "- that's all the terrible" crime "of those who have become the target of the hunt for" democratic rebels ".

The latter went even further and once again demonstrated that they are going to fight directly against civilians. Now they declare that they will attack airports and shoot down civilian aircraft.

Previously, they attempted to seize several military airfields in Idlib, in Aleppo. They even managed to trumpet all over the world about their imaginary "successes" (which were picked up by the joyful world media). However, the army managed to repel these attacks. Pissed off fighters broke the chain and made such a formidable statement.

As stated by the representative of the Ministry of Foreign Affairs of the Russian Federation Gennady Gatilov, such statements of the rebels were the result of the fact that some countries irresponsibly supplied them with MANPADS.

An official statement from the Russian Foreign Ministry says that the militants did not go far from al-Qaida with such statements.

Perhaps this is the empty bluff of "fighters for democracy." They want to sow fear, so that people are afraid to fly to Syria. After all, those who come to this country see the truth, but the truth is not profitable for them.

It would seem that it is completely unprofitable for them to shoot down civilian planes: after all, then even a Western man in the street who is ready to listen to any lies of the media can refuse to support them, and it will be much more difficult for Western leaders to defend their charges.

But who knows what a monkey with a grenade is capable of? More precisely, with MANPADS ...

In the city of Al-Ksayr in Homs, militants blew up the hospital along with the people who were there. At first it was captured with the help of dug underground tunnels and looted.

I personally saw the destroyed hospital in the city of Homs, in the Al-Karabis quarter. Right before the ill-fated "Arab Spring", the authorities built a new modern 13-storeyed hospital. But it was necessary to wander around "democracy" in this quarter of Homs ...

Now all the 13 floors of the new hospital have been turned into a pile of broken concrete. When the army liberated the block from militants, they blew up everything that was possible, so that the state would be more difficult to restore the infrastructure. In order to blow up such a large building, explosives and a multitude of oxygen cylinders were dragged into the basement. And a bunch of pathetic ruins suggests that “freedom fighters” believe that free people do not need hospitals.

And in the UN stands, smoothed Western politicians again say that "the regime must leave and hand over power."

To whom? Wrestlers with residential houses, civilian aircraft and hospitals? Those who announced an open hunt for civilians in Syria? Have a conscience, gentlemen! And open your eyes to the actions of your pets!