6 September 2012
59
Attack aircraft of the construction of S. V. Ilyushin became an indispensable attribute of the Great Patriotic War, making a huge contribution to the victory. At the same time the Il-2 attack aircraft is officially the most massive combat aircraft in storiesIn total, more than 36 of these machines were produced. Soviet designers called the IL-000 "flying a tank", The German pilots called it a" concrete plane "for the attacker's ability to tolerate damage, but the ground forces of the Wehrmacht spoke more impartially of it, calling the plane" black death "," Iron Gustav "," Meat grinder ". IL-2 and its further development, the IL-10 attack aircraft, were actively used in all major battles of the Great Patriotic War and in the Soviet-Japanese War, operating on all fronts.

Acting as the main striking force of the Soviet military aviation, the Il-2 attack aircraft played a very important role during the war years and had a noticeable effect on its outcome on the Eastern Front. Before the war itself, Design Bureau Ilyushin managed to create an airplane, which was based on the latest achievements of Soviet science and technology. A powerful aircraft engine, stamped inhomogeneous armor (which made it possible to produce armor parts having a difficult surface), the aircraft had a streamlined armored hull, which was equipped not with mounted, but with “working” armor, and the aircraft also used bulletproof glass to protect crew members. The aircraft was equipped with high-speed aircraft guns and rockets. All these components in the future became the main components of the success of the IL-2 attack aircraft.

The first tests of the Ilyushin-designed aircraft, which received the designation TsKB-55 or BS-2 (the second armored attack aircraft) took place in the 1939 year. The first flight on the new machine was made by the famous Soviet test pilot V. K. Kokkinaki. The BS-2 was a double cantilever monoplane with an AM-35 liquid-cooled engine (power 1350 hp) and a semi-retractable landing gear. All vital units and units of attack aircraft (gas tanks, engine, cooling systems), as well as the crew were located in an armored hull. 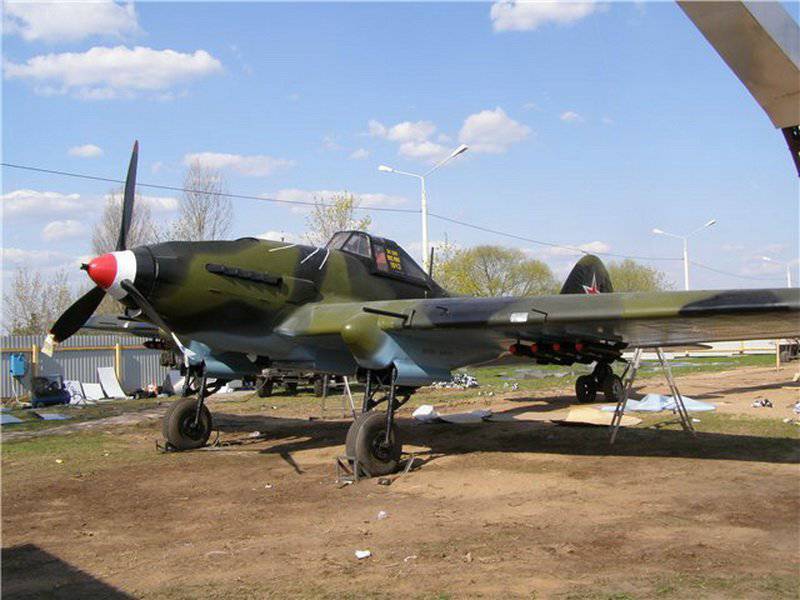 IL-2 single
After passing tests that were deemed successful, the aircraft underwent a series of changes. In particular, it was equipped with a less high-altitude, but at the same time more powerful engine AM-38, which was created in KB A.A. Mikulin specifically for this aircraft. The cab layout and cooling systems have also changed. The crew was reduced to 1 man - pilot. An additional fuel tank was placed on the shooter’s place, armament and reservations were reinforced. In this form, the aircraft in the 1940 passed factory tests.

The first serial attack aircraft, which received the designation IL-2, began to leave the factory shops in the 1941 year, and the first combat units, which were armed with these machines, were created just before the war. The appearance on the IL-2 fronts was a complete surprise for the Germans. Despite the fact that the tactics of using armored attack aircraft had not yet been fully worked out, they immediately began to cause serious damage to the enemy, demoralizing its parts. With great success, the Il-2 attack aircraft units were used against enemy mechanized and armored units.

The plane's glider was a single-engine monoplane of mixed design with a lower wing layout. The main feature of the aircraft was the inclusion of its armor in the power circuit of the airframe. The armor of the attack corps replaced the skeleton and skin of the entire nose, as well as the middle part of the fuselage. The carrier armor was riveted and made of homogeneous steel armor AB-1. This armored hull covered the engine, radiators, the cockpit and a number of machine units (on the prototype, he defended the gunner). The transparent frontal armor of the cockpit visor was 64 mm thick. and could withstand a hit of an 7,62-mm armor-piercing bullet when fired at close range. 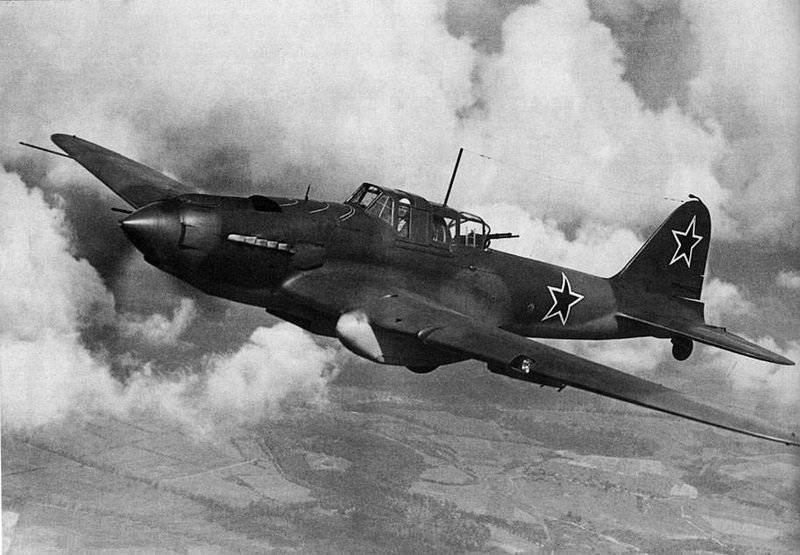 IL-2 Double
Faced with heavy losses from the Il-1941 attack aircraft in 2, which did not have defensive weapons, the Air Force representatives turned to Ilyushin demanding to make the plane a two-seater, as it was intended. As a result, by the end of 1942, the side shooters re-appeared on the plane. At the same time, it was no longer possible to change the armored hull, so the shooter was out of it and was protected only by an 6-mm armor sheet from the side of the plane's tail. The armored corps, which would have defended both crew members, reappeared only on the next attack aircraft version, the IL-10, which was produced from the 1944 year.

Attack aircraft equipped with a piston engine AM-38. It was a 12-cylinder V-jet liquid cooled engine. Its power in various flight modes ranged from 1620 to 1720 hp. The engine was created in the OKB Mikulin. The total fuel capacity on models without an air gunner was 470 liters.

Armament attack aircraft Il-2 was as follows:
- 2 guns installed in the wing consoles (first 20-mm ShVAK, then in the main series - 23-mm VYA, 37-mm guns were installed in the anti-tank variant), the sample with the 45-mm guns was also tested.
- 2 ShKAS machine gun (wing)
- aerial bombs, containers with PTAB
- PC-132 or PC-82 rockets
- The 12,7-mm UBT machine gun was used as a defensive armament on the double version of the attack aircraft.

The Il-2 attack aircraft was produced in single (only pilot) and double versions (pilot and air gunner). Various structural and technological changes were made to the aircraft regularly. For example, at the end of 1941, a number of specimens began to be installed, made of wood, with additional external stiffeners, due to a lack of materials. Also changed booking cars and weapons. 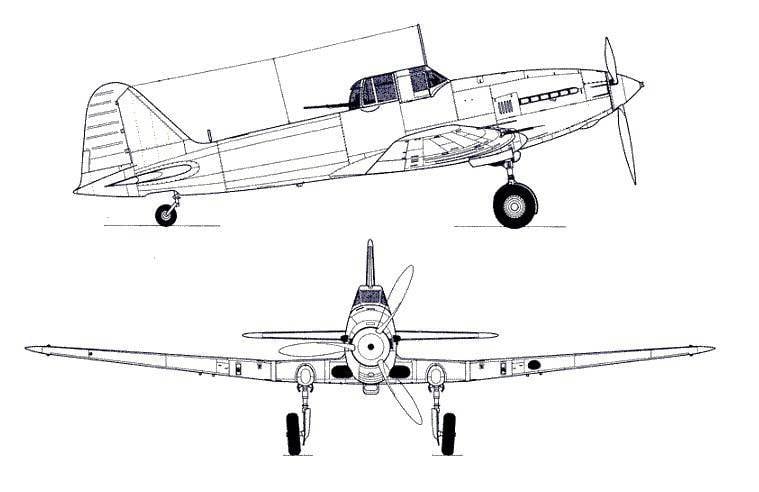 Stormtrooper IL-10
Created in 1944, the Il-10 AM-42 armored attack aircraft fully embodied the concept of a “flying infantry fighting vehicle”, which had a significantly increased integral combat effectiveness factor when solving problems for direct aviation support of troops. It was possible to increase the effectiveness of the attack aircraft due to the higher mobility of the vehicle over the battlefield, as well as partial reinforcement of weapons while maintaining the mass of armor at the level of the main attack aircraft of the Red Army Air Force - IL-2.

IL-10 is a double all-metal monoplane with a lower wing. The main difference from the IL-2 was, in particular, that, taking into account the available recommendations, which were based on statistical studies of the susceptibility of the gunner and pilot IL-2, the attack aircraft’s cockpit was fully incorporated into the armored corps. The booking thickness of the engine hood was also increased from the sides and bottom to 8 mm. instead of xnumx mm. on IL-4. The defensive weapon caliber has been increased from 2 to 12,7 mm. 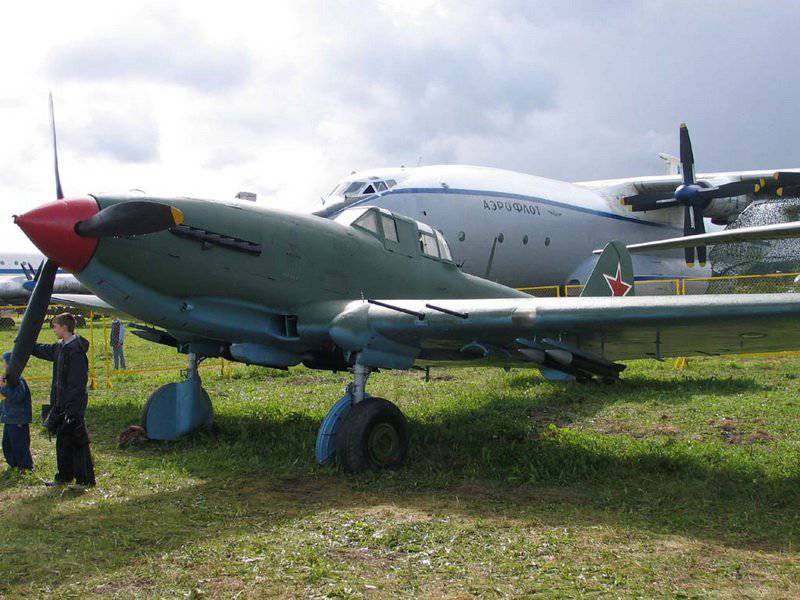 This film tells about the most deadly part of the Soviet Air Forces of the Second World War - about attack aircraft. This story will consist mainly of IL-2 ("Flying Tank" - so called our designers) and its modifications. German pilots for the ability to transfer damage called him - "Concrete Plane." Wehrmacht land forces have earned several unflattering nicknames, such as "Butcher", "Meat Grinder", "Iron Gustav" and "Black Death". Also, the film will describe the further development of the Il-2 attack aircraft, the Il-8 and Il-10 aircraft. The film deals with the aircraft, which according to the designers' idea was to form the basis of the fifteen-thousandth anti-tank air army - the Pegasus aircraft.

Ctrl Enter
Noticed a mistake Highlight text and press. Ctrl + Enter
We are
Heavenly tankmanTo the 70 anniversary of the counterattack, as the "Typhoon" was tamed
59 comments
Information
Dear reader, to leave comments on the publication, you must to register.