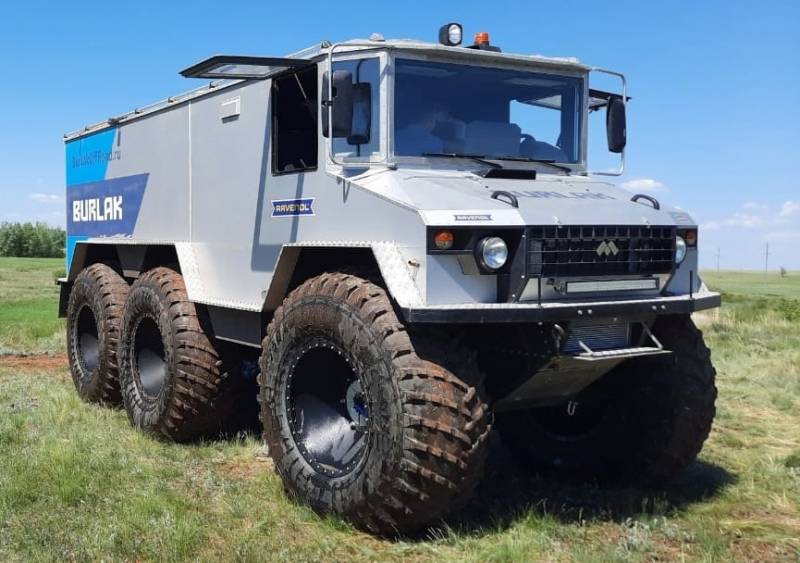 Burlak is being tested in the interests of Gazprom. Source: vk.com/makaroffroad

"Burlak" goes to the North

The permafrost is melting, ice receding on the northern borders of Russia, huge spaces are freed up for the extraction of minerals and the transit of goods. Roads in the Far North are an extremely expensive undertaking that will never pay off. The harsh conditions require unconventional engineering solutions. The transport of the conquerors of the Arctic must meet a lot of conflicting requirements - extreme maneuverability, the ability to overcome water obstacles, the ability to work at low temperatures, reliability and high autonomy.

There can be tens or even hundreds of kilometers of snowy desert between settlements in the Arctic zone, which off-road vehicle crews must overcome with sufficient comfort. Even more stringent requirements are imposed on military arctic equipment. Developers have to adapt equipment for shielding, reliable operation at temperatures up to minus 60, resistance to arms mass defeat and at the same time still make it comfortable enough for the crew.

The concept of the Ministry of Defense of the Russian Federation is quite simple - in the extreme conditions of the Far North, servicemen should live a full life, not survive. Of course, such requirements greatly increase the complexity of technology development. 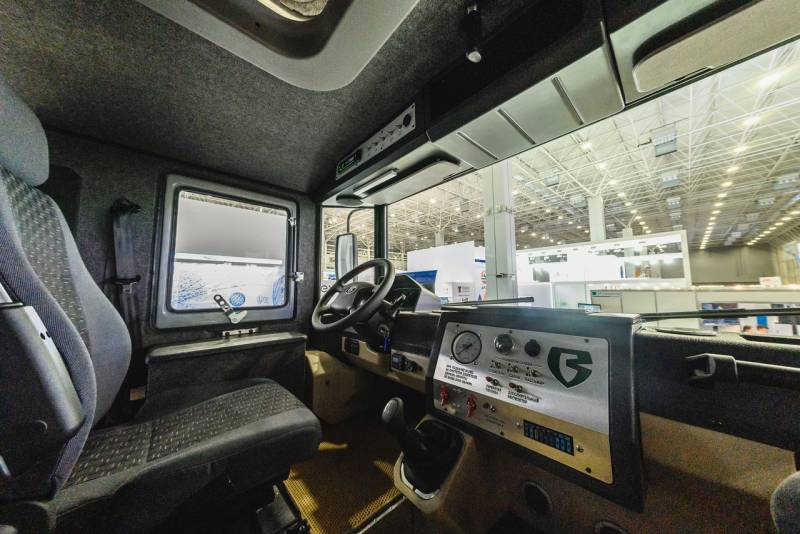 Cabin decoration. Source: vk.com/makaroffroad
One of such universal all-terrain vehicles, quite capable of joining the ranks of the Russian army, is the Burlak, which appeared for the first time in Yekaterinburg.

The car managed to visit the Vostok station in Antarctica, where it successfully proved itself. Until now, none of the numerous cohort of Russian pneumatic vehicles has dared to do this. Now in the region of the South Pole only Burlak is operated from wheeled vehicles, all other vehicles are on caterpillar tracks.

The very fact of working in extremely low temperatures speaks volumes about the level of engineering of the machine and is an excellent advertising campaign. Burlak is engaged in the transportation of goods from the Progress station (Prydz Bay) to the Vostok station located 1400 km from the coast. 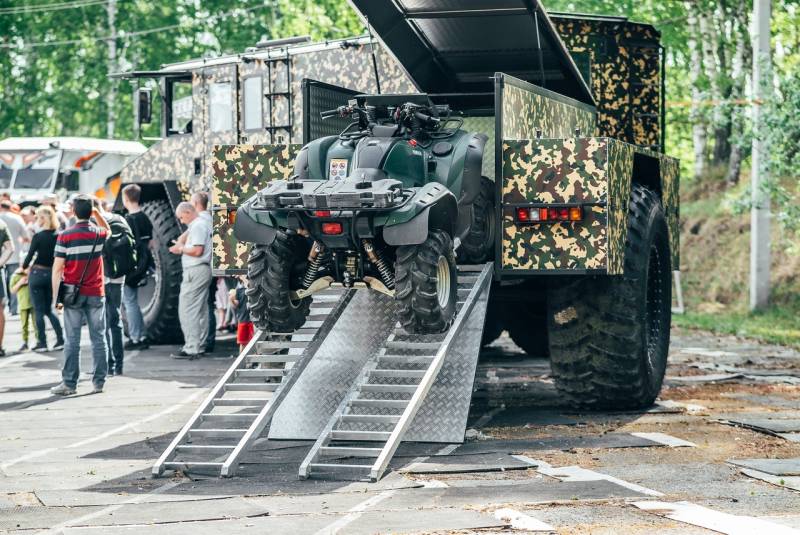 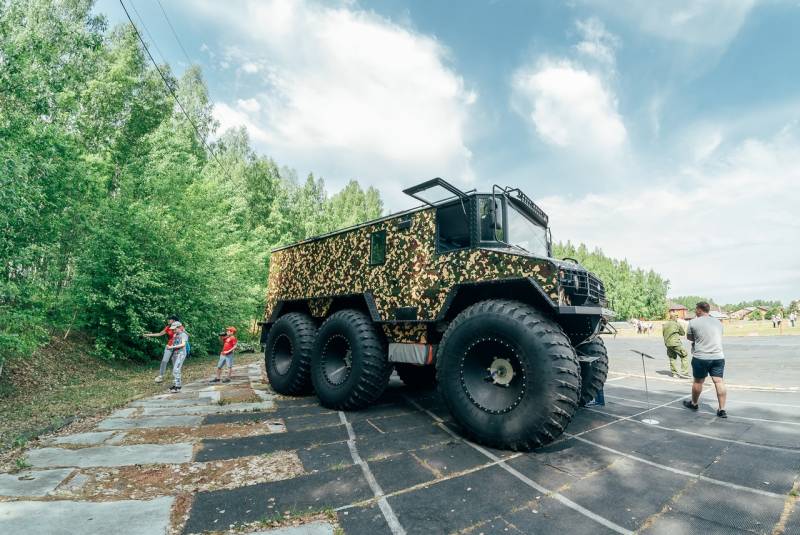 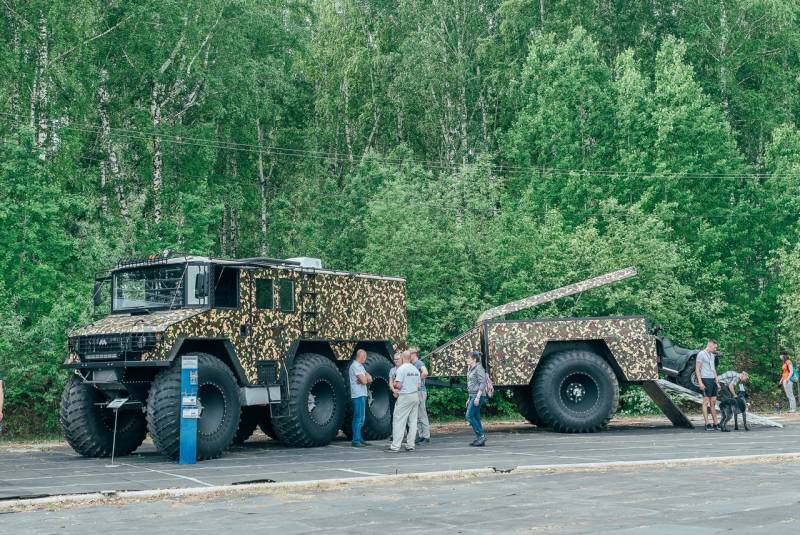 "Burlak" for hunters. Source: vk.com/makaroffroad
The first "Barge Haulers" appeared back in 2017 from the idea of ​​the Russian champion in trophy-raid Alexei Makarov and with the financial support of Maxim Belonogov.

It is interesting that the authors from the very beginning oriented the machine to work in the conditions of the North and South Poles. Makarov did not build the first prototype from scratch - back in 2010, under his leadership, the six-wheeled Makar was assembled, on which the author reached Cape Chelyuskin.

The first all-terrain vehicle named "Burlak" was built in 2016 for an autonomous expedition to the North Pole. In its final form, the car took shape in 2017 and immediately became famous for its impressive achievements - 3000 km of continuous run, climbing Mount Narodnaya and conquering the North Pole.

Burlak is a hefty mobile home.

Judge for yourself, with a ground clearance of 750 mm in an unloaded state, the height of the car reaches 3,2 meters. The width is 2,9 meters. The requirement to overcome extreme off-road conditions made Burlak not the best road car. The largest wheels in the class (1,75 meters) turn at a small angle, which seriously limits maneuverability. What is not considered a disadvantage in the snowy steppe can cause a large traffic jam on public roads.

It is better to transport "Burlak" to its natural habitat by car transporter, but there are problems here as well. The overall height of the machine on the trawl does not fit into road restrictions, so the wheels have to be removed and transported separately. In addition, the Burlak has a high center of gravity and large soft wheels - an ideal combination for overturning with a sharp maneuver. However, this is a sore spot for all pneumatic passages, regardless of the layout solutions. 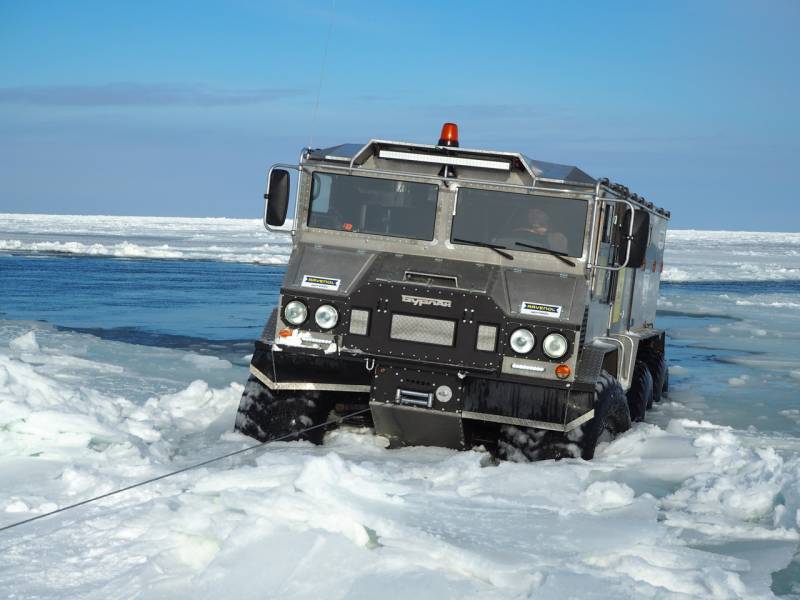 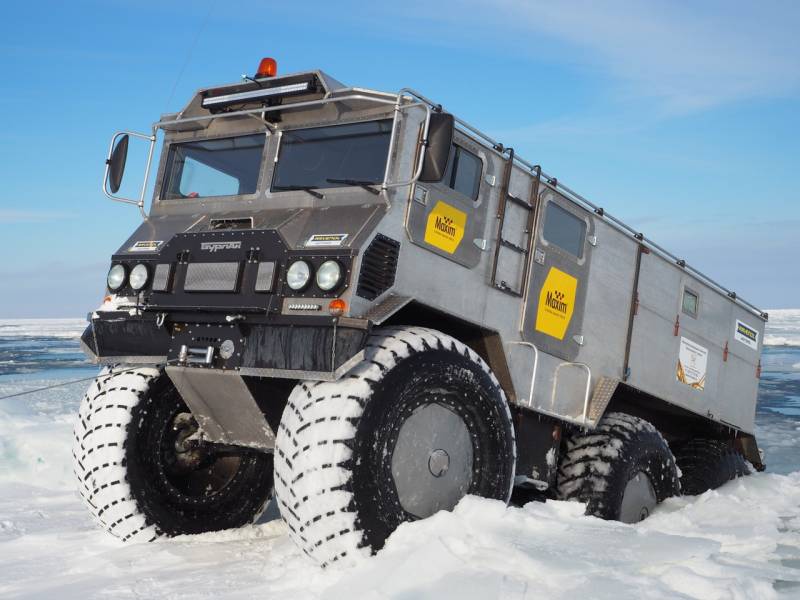 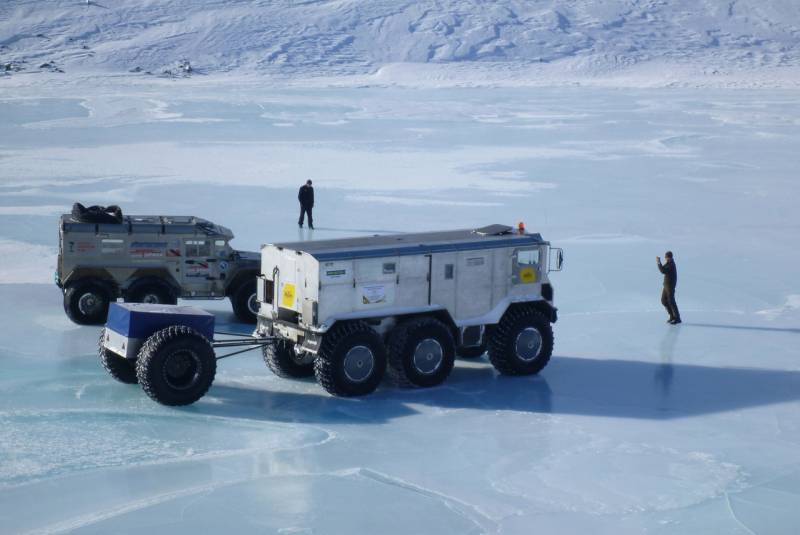 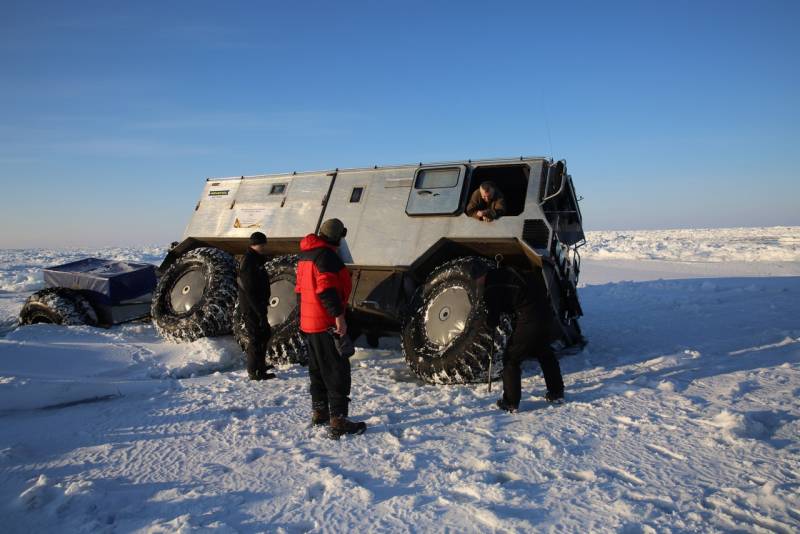 The first version of "Burlak" is being tested in the Kara Sea. The photo also shows the Makar all-terrain vehicle. Source: vk.com/makaroffroad
At the heart of "Burlak" is a boat frame, inside of which are hidden all the main components of the machine - the engine and transmission.

Makarov chose a 2,8-liter Cummins ISF diesel engine with a capacity of 150 hp as a power plant. from. from "GAZelle Next". The diesel engine forcibly reduced the maximum torque to 1800 rpm. Cummins, while hinting at an American origin, leads history from China. This could potentially become a problem in the adoption of the Russian army.

At the same time, "GAZelle" vans with the same "cummins" can be found in the units of the RF Ministry of Defense. The motor, although imported, is assembled in Russia. It is interesting that on the first prototypes "Burlak" was equipped with a Japanese turbo diesel Toyota 1KZ-TE of 145 hp. from. and automatic transmission.

Now "Burlak" with a reinforced mechanical gearbox from "GAZelle" and final drives, developed on the basis of mechanisms from wheeled armored personnel carriers. Reducers allowed to reduce the load on the transmission by four times. Transfer case of our own design, assembled on the basis of two similar units from the GAZ-66 all-terrain vehicle. The suspension is also unified with serial production, but the configuration of the mechanism is author's. Each wheel has an independent double wishbone spring suspension. 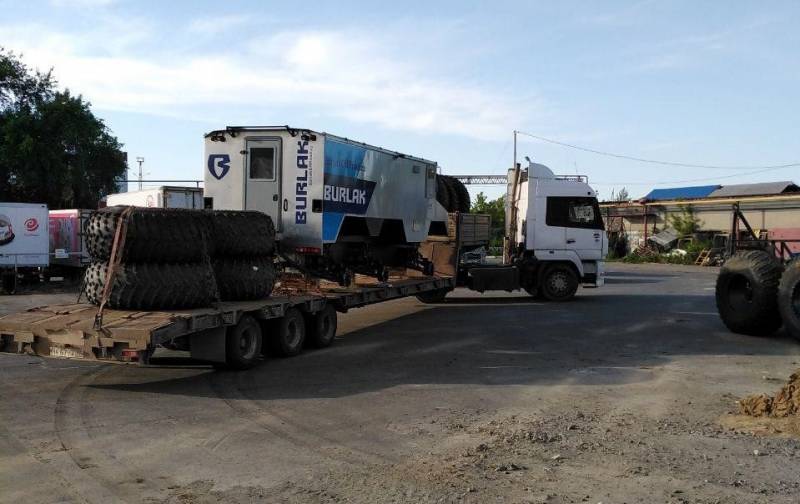 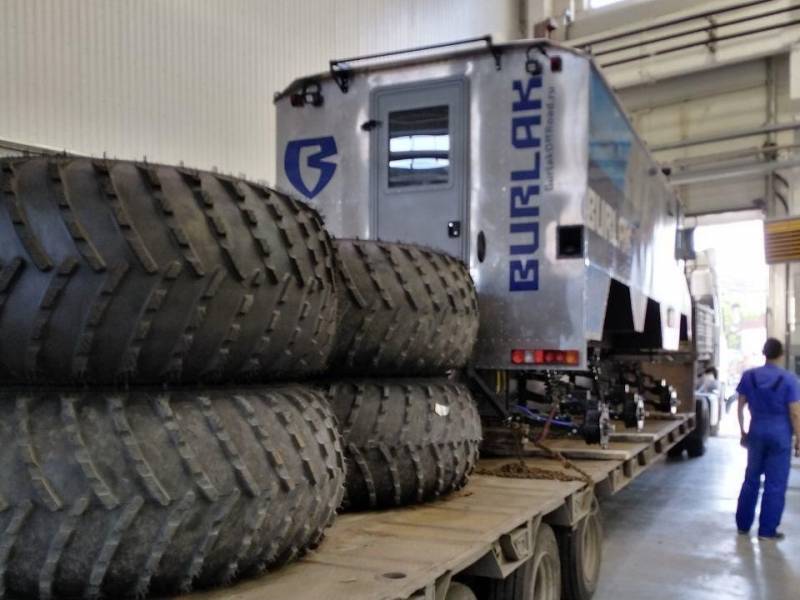 "Burlak" for Nizhnevartovsk. Source: vk.com/makaroffroad
Initially "Burlaks" were produced at the enterprise "All-terrain vehicles Makarov", and later relocated to Kurgan. Now the plant workers are preparing to expand production to 30 cars a year due to the increased orders. Wide unification with serial equipment is explained by the not very developed production base, and by the requirements for high maintainability of the all-terrain vehicle. For example, beyond the Arctic Circle, it is much easier to find a spare part from GAZ than to write out an expensive "author's" unit from Kurgan. Nevertheless, Burlak has several authentic transmission units - all cardan shafts (there are 13 of them at once) are manufactured in Arzamas according to a special project. 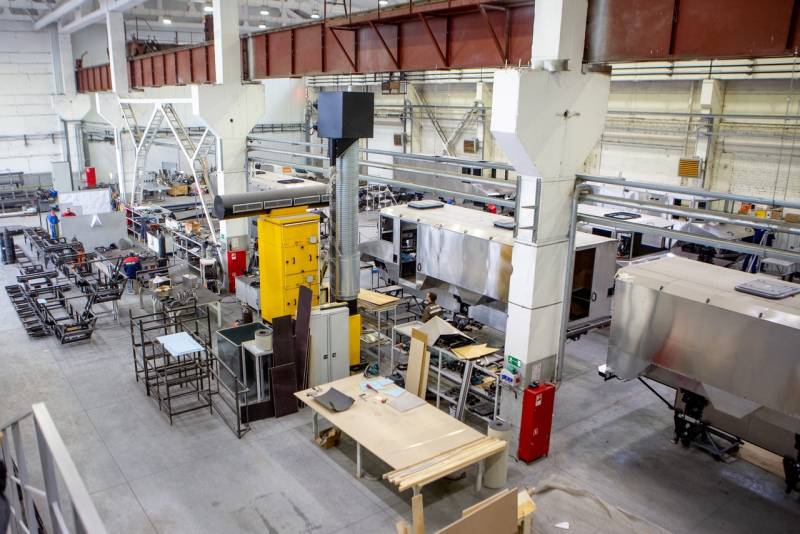 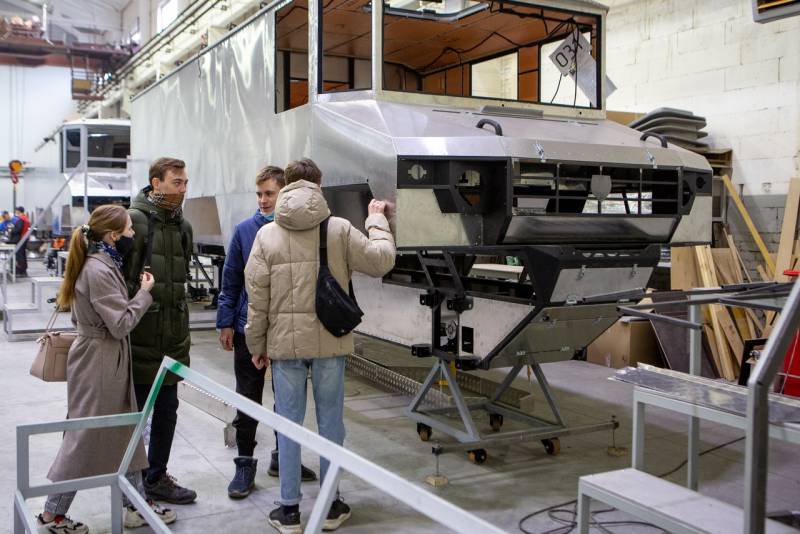 Assembly production in Kurgan. Source: vk.com/makaroffroad
The task of "Burlak", according to the author Alexei Makarov, is a comfortable transportation of up to 15 people with the necessary equipment and supplies in the Far North.

To do this, the roof of the cab was raised 1,85 meters from the floor - as a result, it turned out to be a bit high, but the car's habitability improved markedly. In cold weather, mechanics do not need to go outside the car for repairs. Since all units are located inside a sealed and heat-insulated boat frame, access to them is organized through hatches in the cabin floor. The fuel tank for the arctic diesel fuel is also located in the warmth.

Large low-pressure wheels act as excellent floats, propelling the car up to 5 km / h by spinning on the water. As additional equipment, the Makarova ATV company offers a propeller driven by a power take-off, as well as additional floats in the rims, which increase the displacement of each pneumatic roller from 1,2 to 1,46 tons.

The cost of each 6x6 all-terrain vehicle (there is also a 4x4 option) varies from 8 to 10 million rubles. Taking into account the considerable price for the 3 tonne carrying capacity class, the all-passable vehicle is able to quickly recoup the acquisition costs.

According to the developers, in the Far North conditions "Burlak" increases the working season to nine months. For other users, wheeled vehicles are idle in the off-season, and the owners of Burlakovs earn money. The younger brother 4x4 is not only suitable for transporting people and goods up to a ton, but it is quite useful for hunters, fishermen and gamekeepers.

"Burlak" with four wheels is shorter by a meter, more maneuverable and, due to the previous 150-horsepower engine, has more power. The cost of such a car is up to 8 million rubles. 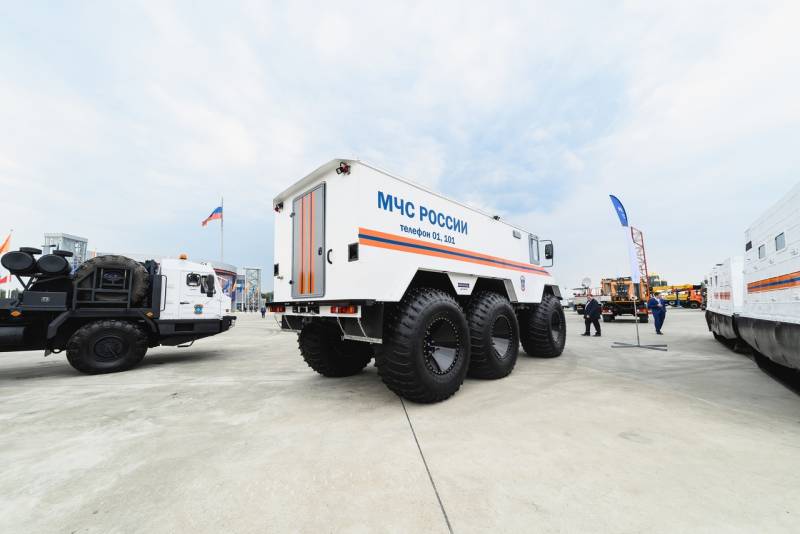 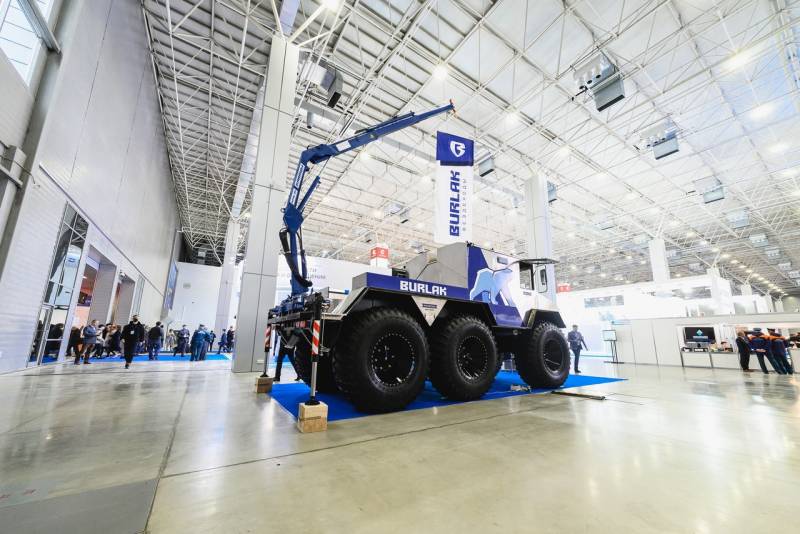 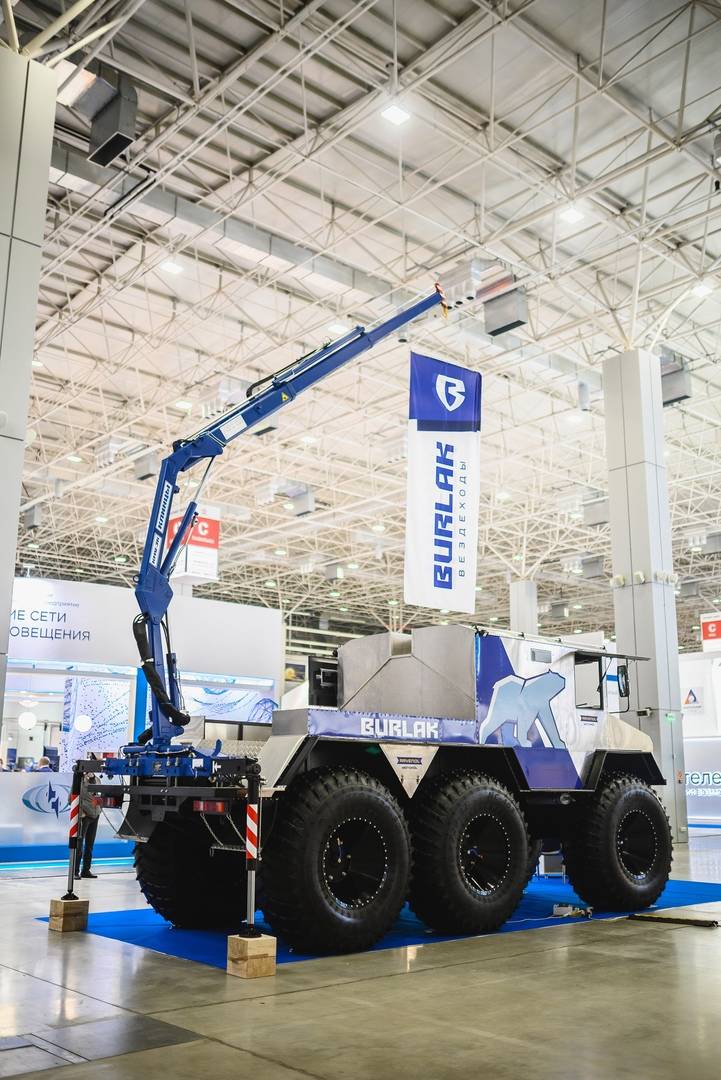 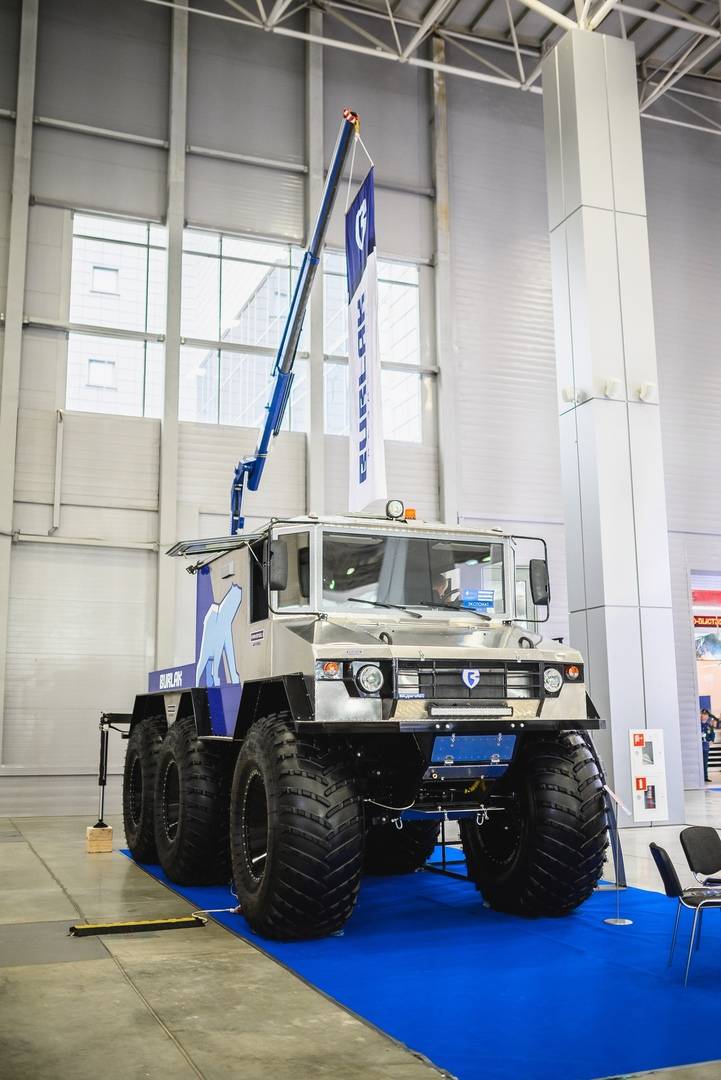 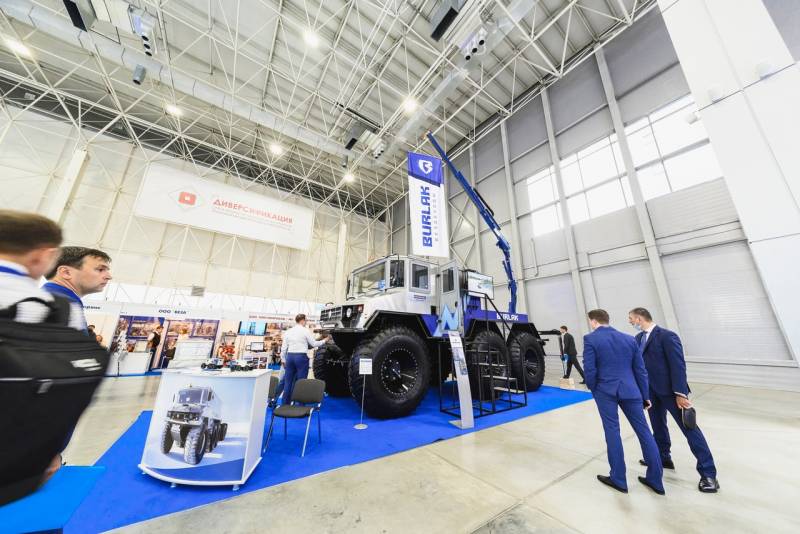 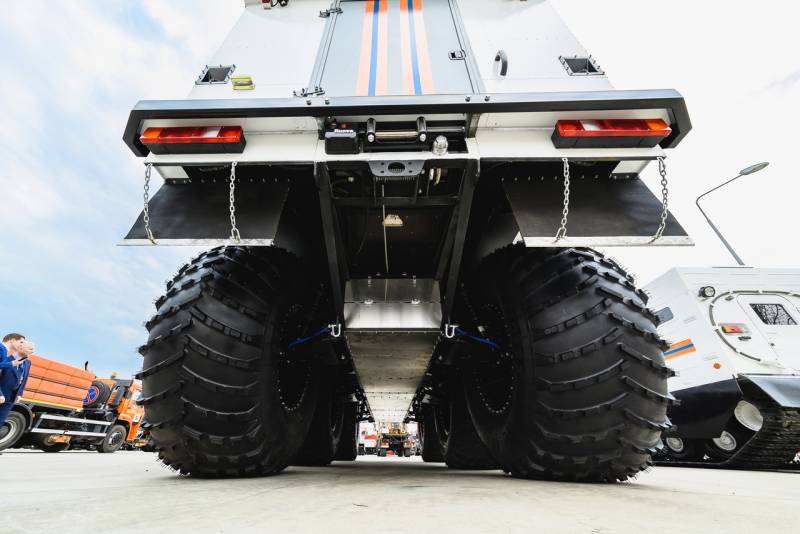 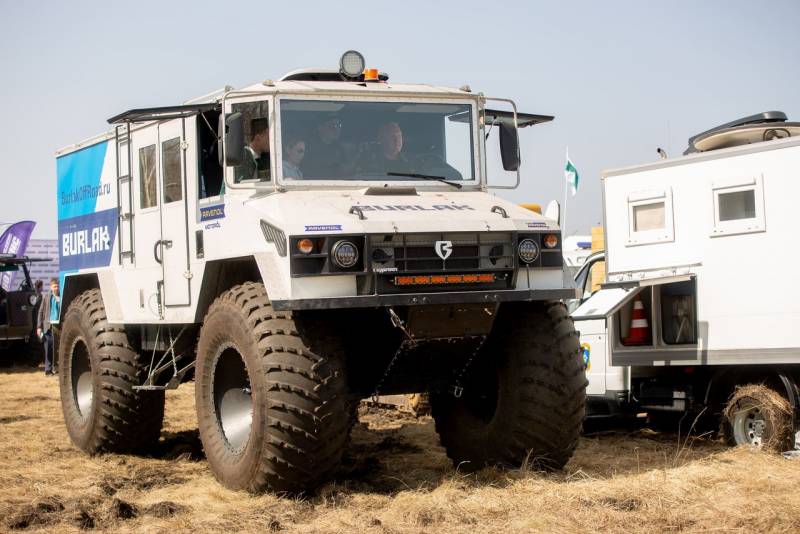 Lightweight "Burlak" with two bridges. Source: vk.com/makaroffroad
The first who appreciated the advantages of Burlak was a construction company from Chukotka. Most of the cars produced are taken by companies from the Tyumen region and its autonomous regions. For example, one Burlak works for the travel agency Russian Arctic Travel, which organizes tours beyond the Arctic Circle.

Negotiations on the transfer of machines for trial operation by Transneft are in full swing now. To meet the needs of the customers, 13 modifications of the Burlak and more than 60 variants of the trailer to it have been put into operation in the Makarov All-Terrain Vehicle. There is information that the EMERCOM of Russia is interested in the machines.

Considering the scale of the development of the Arctic Circle by the Russian armed forces, there is every reason to believe that Burlaks will take a place in the army. At least it is worth hoping for.

Ctrl Enter
Noticed oshЫbku Highlight text and press. Ctrl + Enter
We are
Pneumatic Airways for the Russian Army: Responding to Arctic ChallengesAll-terrain vehicle "Burlak": a car for a trip to the North Pole
Military Reviewin Yandex News
Military Reviewin Google News
20 comments
Information
Dear reader, to leave comments on the publication, you must sign in.