Professional competence. Commanding staff of the 2nd squadron of the Pacific Fleet 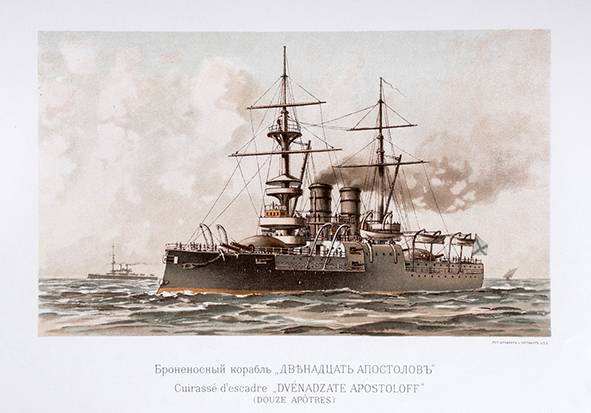 How ready were the sailors of the Baltic fleet? What combat and service experience did you have? Was Rozhestvensky right when he wrote that Alekseev had already taken the best?


The questions are complex. We can only read biographies and draw conclusions from them, and they do not always reflect the competence of a person. And the rapid progress of technology quickly devalued experience and knowledge. But nevertheless, a lot can be gleaned simply from biographies. Moreover, there are not many of them - the squadron had four admirals, a flag-captain and, for completeness, the commanders of the EBR.

It must be clarified - the census system in the navy led to wild leaps, when officers were thrown from ship positions to naval ones, and often not suitable, but free. Hence the wild spread in individual biographies. There are no pure specialists who served on ships of the line or cruisers. Specialization at that time was tight, often not at all, and education was limited to the Marine Corps and various courses.

1. Rozhdestvensky Zinovy ​​Petrovich... At the time of the battle - 57 years old. Brilliant education - Mikhailovskaya Artillery Academy. Combat experience - the battle of "Vesta" in the Russian-Turkish war. Diplomatic experience - Commander of the Bulgarian Navy and Naval Attaché in London. A trip to the Far East by the commander of the cruiser "Vladimir Monomakh" under the flag of Makarov, with flattering reviews of the latter. The commander of the training and artillery detachment of the Baltic Fleet, demanded the inclusion of the latest ships in it. Organizer of the rescue of the coastal defense battleship "General-Admiral Apraksin". Since 1903 - Chief of the Naval General Staff.

2. Nikolai Nebogatov... At the time of the battle - 56 years old. Education - naval school and the course of naval sciences of the Nikolaev Academy in 1896. No combat experience, no diplomatic experience. He commanded "Nakhimov", since 1898 in one way or another in positions related to the training of recruits. Staff experience - flag-captain of the Baltic Fleet Practical Squadron and the fourth naval crew.

3. Fölkersam Dmitry Gustavovich... He died on a hike three days before Tsushima. 59 years old. Education besides the Corps - mine and artillery classes, for a long time he was engaged in teaching work on galvanic artillery firing devices. Staff experience - flagship mine officer of the headquarters of the commander of the Baltic Sea Practical Squadron. Team experience on modern ships - battleship Nikolai I (four years). Head of the Training and Artillery Detachment of the Baltic Fleet from 1902 to 1904. Artilleryman-innovator, one of the sailors-scientists of our fleet, now completely forgotten.

4. Enquist Oskar Adolfovich... 56 years old. Education - Marine Corps, no combat and diplomatic experience. There is no staff experience. For four years (1895-1899) he commanded the cruiser Duke of Edinburgh. Since 1902 - Nikolaev mayor.

What immediately catches your eye?

Rozhestvensky surpassed all of his junior flagships by a head, both in experience and in education, excluding Radlov, but he had very specific tasks, which he coped with five. Still, Otto Leopoldovich was not a combat officer.

All junior flagships have extensive experience in training recruits, which is logical on a squadron assembled in haste. Felkerzam had experience in training officers, taking into account the number of young people in the squadron - not bad either. All of them are of the same generation, which means they are well acquainted with each other (Enquist and Nebogatov are classmates in the Marine Corps).

The problem is that there was no one to replace Rozhestvensky either by experience or by authority. There was no clearly defined number two on the squadron. They could have become the commander of the Third Squadron, but Nebogatov was sent, the same average person with training experience and zero combat experience.

The situation could be improved by placing someone with combat experience on the squadron. The options were: Bezobrazov, Jessen, Stark, but ... it didn't work. Why? One can guess - Rozhdestvensky himself was not in those ranks and with the wrong experience, so that a conflict did not arise.

In the end, the order for the next battleship in the column is quite logical - there was no one to transfer command: Enquist was at his limit, Nebogatov was beyond the limit, Felkerzam died, and, in general, the squadron was not his.

In the sense of the junior flagships, the squadron was not ready (from the word - in general): a small number of flagships multiplied by their low combat competence. And it makes little sense to blame Zinovy ​​- qualification, gentlemen, qualification ...

On the other hand, all the cadres who can effectively bring and teach at least something have brilliantly fulfilled their task, and Enquist even exceeded it. But one shell in battle - and the squadron is decapitated.

Commander - 1st Rank Captain Ignatius Vasily Vasilievich... Marine painter and sailor. 51 years old. Graduated from mine officer classes. For a long time he commanded destroyers, in profile, positions on monitors, rather for qualifications, served in the Pacific squadron, no combat experience. And then in 1901 he was appointed commander of the newest battleship squadron. Cens. Not that he failed, but an experienced miner would have looked better on destroyers, and a talented artist would have looked better on the shore.

Commander - Bukhvostov Nikolay Mikhailovich... 48 years old. Education - Naval Corps, most of the service on the shore, then he fought against the plague, then he was in charge of the school, or even in general:

Member of the commission chaired by Rear Admiral A. N. Parenago for comparative tests of the quality of hemp cables produced by the hemp factories of Neva and Gotha.
For service he commanded the cruiser "Rynda" (1898-1902) and the cruiser "Admiral Nakhimov" (1903), took over in Saigon. He received the position of commander of the newest EBR in 1903, already during the testing period. With undoubted personal courage and nobility, he had few competencies, simply because of the lack of serious experience in the service.

Commander - Serebryannikov Petr Iosifovich... 51 years old, Mine officer classes. An experienced commander, three years as a senior officer and two years as a commander of the armored cruiser "Russia". The battleship took over in 1902 during construction.

Commander Jung Nikolay Viktorovih. 49 years old. Combat experience in the Russian-Turkish war, the experience of the command of the EBR "Poltava", as a VRED, the course of the Naval Academy, a member of the commission for testing new battleships since 1898. Command of training ships.

Commander - Baer Vladimir Iosifovich... 51 years old. Service experience in the Far East, mine classes and the course of the naval academy. Overseeing the construction of "Varyag" and "Retvizan" in Philadelphia. Refused the rear admiral's rank for the sake of the campaign.

What do we have from the top five?

Three commanders are perfectly trained professionals: one of them has combat experience, one is a rear admiral without a minute. Bukhvostov and Ignatius look weaker, the second is the commander of the flagship, and the first is a descendant of the Peter's aristocracy, and at least you cannot refuse personal courage.

Unlike the junior flagships on the newest battleships, they are quite sensible professionals with considerable experience and without a minute as admirals. On the old ships, everything was also not bad, the commanders, of course, no differences, but solid middle peasants with considerable sailing experience. Without combat, it is true, but where did the combat come from?

If we sum up a certain general conclusion, everything was fine with the commanders, which the Tsushima battle showed: not a single ship surrendered on its own, not a single one fled, people died, but did not surrender.

And the crews were well prepared: no breakdowns in battle, no deaths due to technical reasons were recorded.

And the only mistake remains - the junior flagships, or rather, their selection and placement. And it was this mistake that led to the disaster.

Not to defeat, defeat was inevitable, namely to disaster - there was simply no one to take responsibility and retreat. Only Enquist at night behaved relatively sanely (relatively - because he had to withdraw ALL cruisers) and withdrew to Shanghai.

The rest ... The last order dominated them, which no longer had any meaning or the slightest relation to reality.

Where does the small conclusion come from - cadres decide everything, and cadres of deputies - doubly.

And such an interesting moment - why weren't rear admirals with combat experience involved? There were enough of them.

Why weren't two admirals assigned to the detachment? It's not a problem either.

Disregard for logistics led to defeat, disregard for common sense for the sake of census and rules - to disaster. But the experience was, and Makarov, and Vitgeft. He was, but he was ignored. And worst of all, promising future admirals were killed with the ships, and those who survived were quietly retired.