Flood in the heart of Europe: new victims of global warming 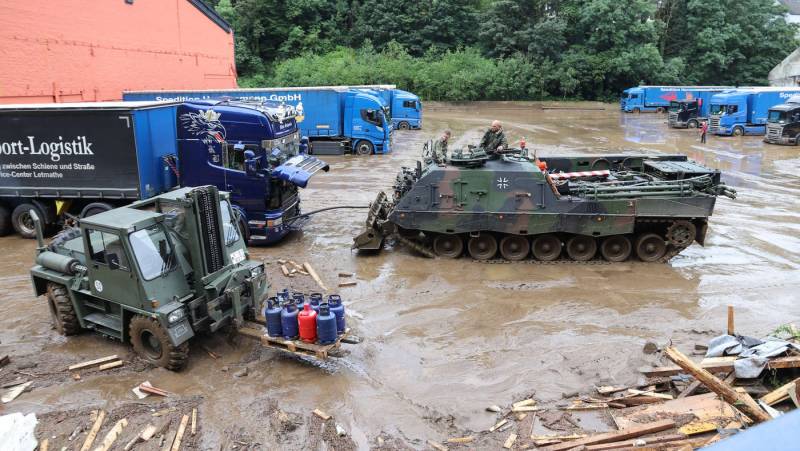 The lucky ones survived

Western Europe is a real national catastrophe. Intense rains lasting several days caused giant floods in Germany, Austria, Belgium and Holland. The rivers have also filled in Switzerland, but have not yet caused destruction.

In Germany, the lands of Rhineland-Palatinate and North Rhine-Westphalia fell under the main blow. The intensity of rainfall in these regions is amazing - in less than a day, up to 150 liters of water poured out per square meter. In the current century, Germany has already been flooded with rain. In 2002, there was the "flood of the century", in which 21 people died. As it turned out, the real flood happened in 2021 - about 180 deaths in four countries, and the sad list will grow every day. In total, there are about 2 thousand missing persons. Judging by the pictures from the sites of the tragedy, on July 14-17, flood flows not only made sense of the streets of European cities, but also changed the landscape of the regions beyond recognition. Huge ravines gape at the site of highways and city blocks. 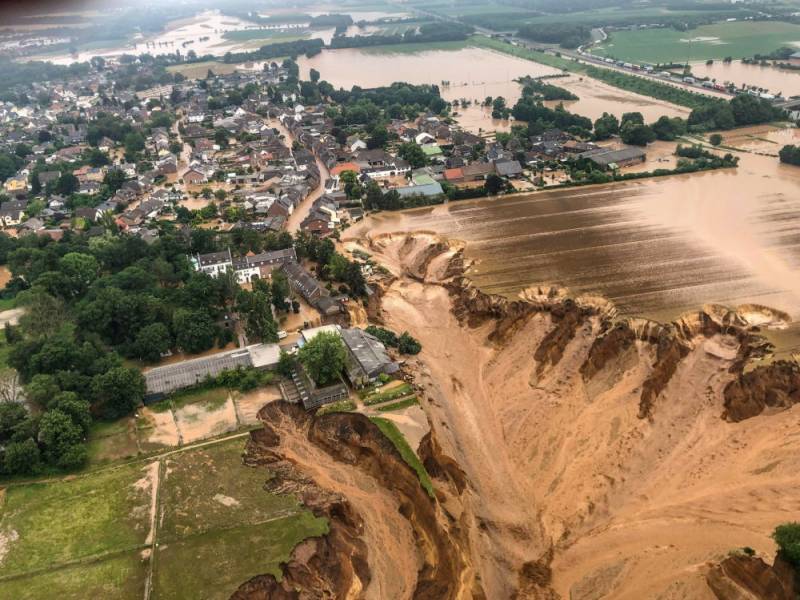 A giant crater on the outskirts of Erfstadt. Source: myseldon.com
The city of Erftstadt, the worst-hit German city, absorbed millions of tons of flood waters from the Erft River in a matter of minutes. As a result, entire residential areas were washed away along with houses, and a giant crater formed in their place. The disaster was approaching so rapidly that the local authorities did not have time to notify the residents, or to de-energize the buildings, or to turn off the gas supply. Gas transmission lines destroyed in the region pose a serious danger to the work of rescuers. Many settlements remain cut off from the mainland - autobahns, bridges and even footpaths have been destroyed. The real quintessence of the catastrophe that took place in the heart of Europe is the words of a local resident:

"The lucky ones survived."

The prime ministers of the Rhineland-Palatinate and North Rhine-Westphalia states also echo the inhabitants, calling the incident a catastrophe of historic proportions. 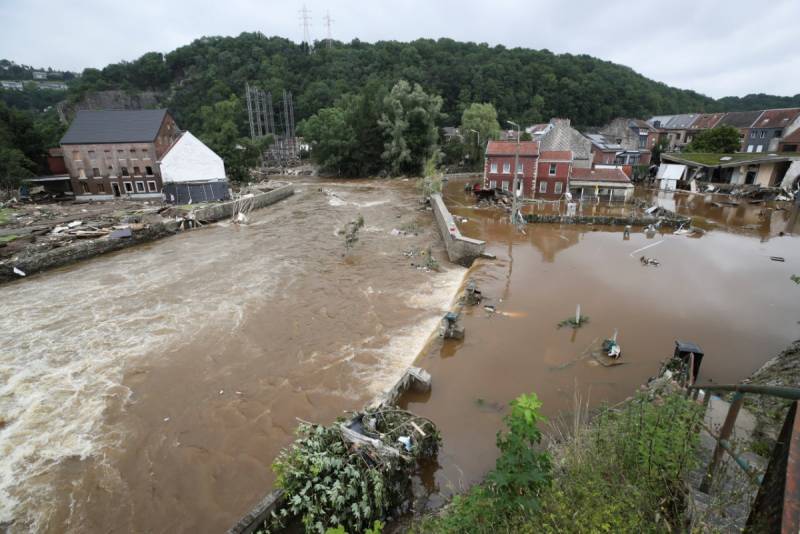 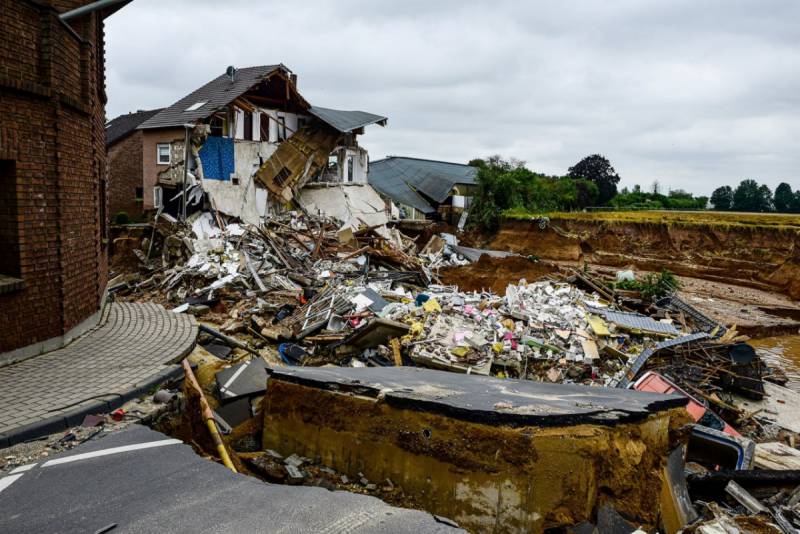 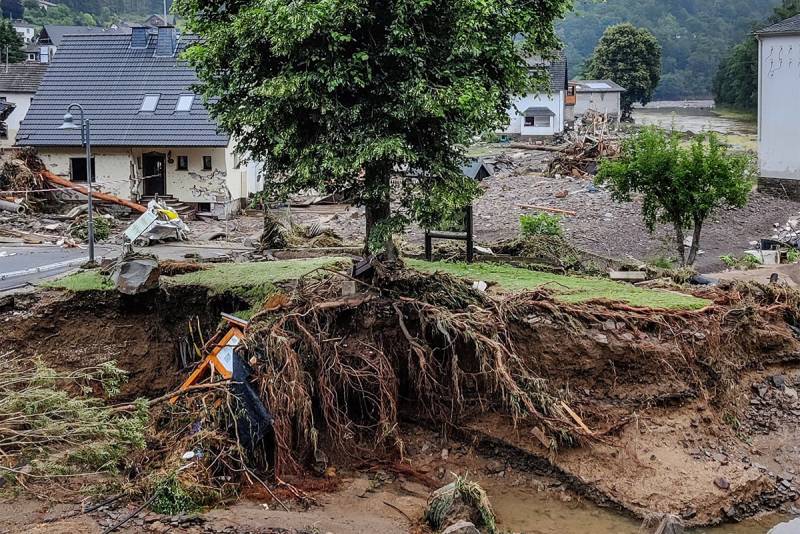 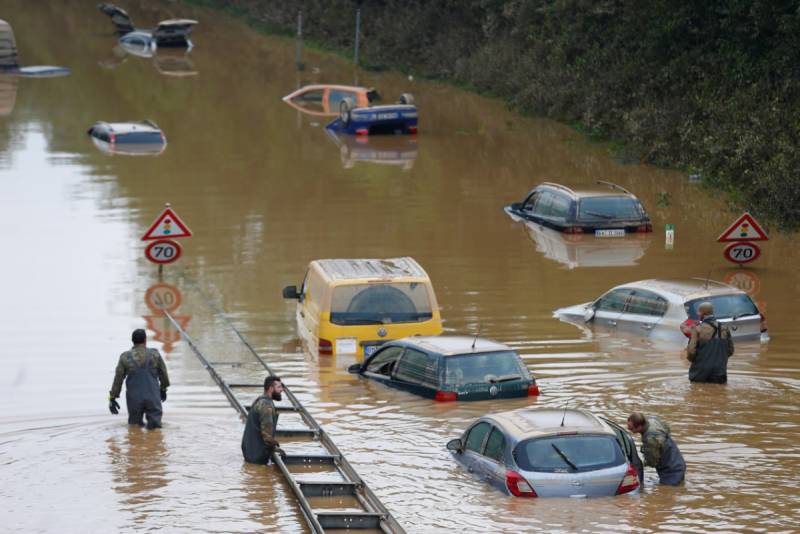 Destroyed by the elements of West Germany. Source: zerkalo.io
The chronicles of the unfolding element are like military operations. The rural district of Ahrweiler is among the hardest hit in West Germany. At least 50 people died here, 12 of whom lived in a disabled home.

In the Netherlands, the city of Venlo, with a population of 100, has suffered the most. In the province of Limburg, residents have fled their homes due to streams of water bursting through the local dam. July 20 is declared a day of national mourning in neighboring Belgium. At its most disastrous in stories the country's natural disaster killed 27 people.

On Thursday, July 15, the supply of kerosene through a fuel line stretching from Germany was interrupted. The Central European Pipeline System (CEPS) was built in the 50s by NATO specialists for defense purposes. It now supplies kerosene to the air harbors of Amsterdam, Brussels, Frankfurt, Luxembourg and Zurich. The gust that happened in the German Echternacherbrück was quickly patched up by July 16.

In Germany, the Bundeswehr was the first to come to the rescue. Since July 14, 540 troops have been clearing rubble, evacuating casualties and conducting search operations in North Rhine-Westphalia. About 300 people work in Rhineland-Palatinate and another 100 fighters in Bavaria. Heavy equipment is widely used - for example, the 371st armored battalion was relocated to the Ar valley of the Rhineland-Palatinate.

After the first shock in Germany, it was time to find the culprit. First of all, they blamed the Ministry of the Interior, headed by Horst Seehover. According to the Free Democratic Party:

"The painting represents a major systemic failure for which Federal Minister of the Interior Seehofer bears direct personal responsibility."

The minister is accused of insufficient promptness in notifying the civilian population of the impending disaster. The Social Democratic Party of Germany compared the incident with the coronavirus pandemic. Two emergencies showed the unpreparedness of the emergency services of the Federal Republic of Germany for modern challenges. 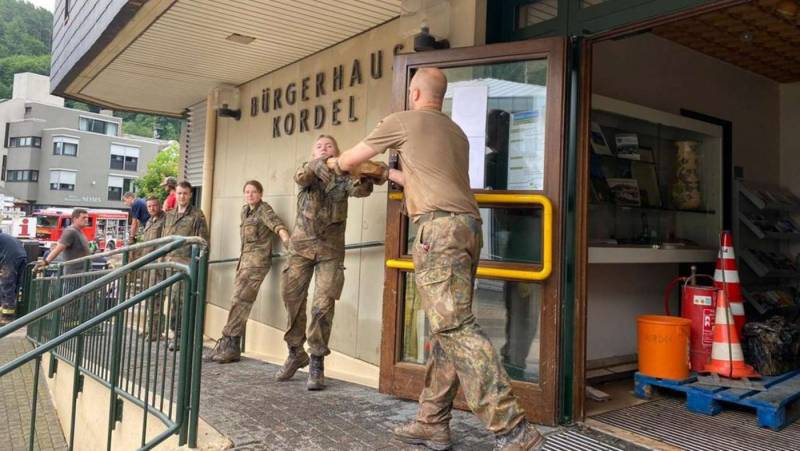 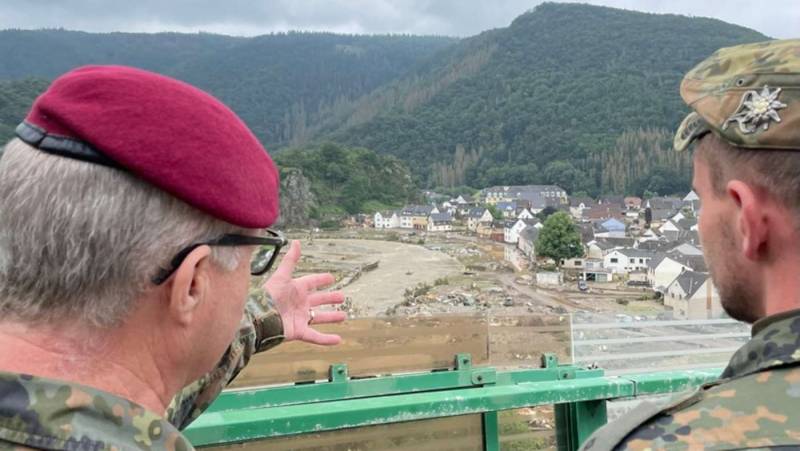 The Bundeswehr has recruited nearly 1000 troops to deal with the aftermath of the flood. Source: bundeswehr.de
German officials as best they can fend off accusations of imprudence. Armin Schuster, head of the Federal Office for Civil Protection and Disaster Relief (analogous to our Ministry of Emergencies), said on July 18 that "the German meteorological service has issued a sufficient warning." But the federal minister could not answer the question in which cities from the disaster zone the emergency siren managed to go off.

Federal Chancellor Angela Merkel, who recently visited the city of Eifel in the flood-affected Ahr Valley, calls for large-scale conclusions from the disaster. From Merkel's words, it is clear that Germany will set a course for even more "greening" the economy:

“We will confront this force of nature - in the short, medium and long term, with policies that are more responsive to nature and climate than we have done in recent years.”

During this week, the German government will accept an unprecedented package of aid to victims of the natural disaster. Next in line is an equally impressive program to rebuild the destroyed infrastructure of the German provinces. The amount of funds will have to be withdrawn from the budget is not even predicted yet. 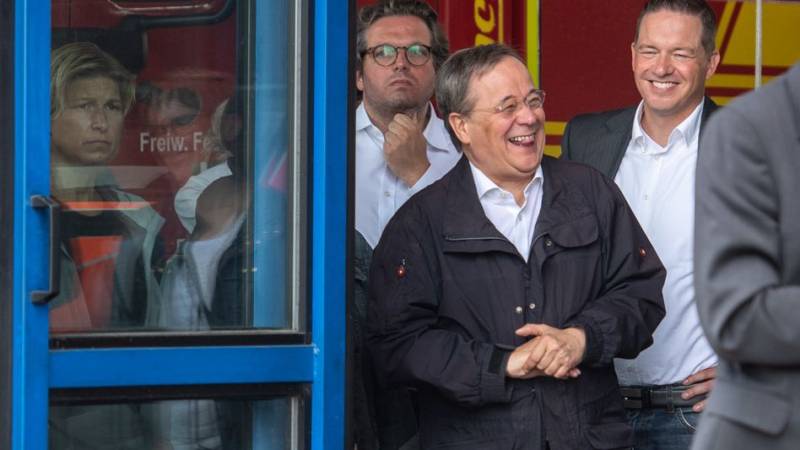 Armin Laschet in a disaster area. Source: spiegel.de
It is interesting how the increased public attention to the consequences of the tragedy can ruin a political career overnight.

Christian Democratic Union (CDU) Chancellor candidate Armin Laschet effectively buried his chances of becoming a leader when he was caught in a video camera, bursting with laughter. And all would be fine if the cameras at this time did not shoot the apology of the President of Germany Frank-Walter Steinmeier to the German nation. Laughing Lashet with his retinue very characteristically set off the words of the president:

“We grieve with those who have lost their families, friends, family members. Your destiny breaks our hearts. "
Then, of course, Laschet will write on social networks about the inappropriateness of this, but this clearly did not smooth out the general negative background to his figure. The disadvantages in the political karma of the candidate for German chancellor add to the lack of attention to environmental issues. Lasher is focused on German industry as the main locomotive of the country's economy. Large-scale flooding, the causes of which are associated with anthropogenic global warming, could cost the CDU party dearly.

The gradual warming up of the atmosphere becomes the cause of natural disasters. According to the researchers, since the beginning of the 1th century, the global temperature has increased by 3 degree, and by the end of this century there is a risk of growth by another 4-7 degrees. Simple processes of global physics play a role here - hotter air contains more moisture, which increases the intensity of precipitation. The atmosphere now accumulates 120% more water than XNUMX years ago. For a long time, the main horror story of the greenhouse effect was the gradual rise in sea level. The lowlands of the globe were in awe of the prospect of becoming the bottom of the world's oceans. But each forecast drew the date of the coming apocalypse at the end of the current century. That is, most people living now will not have to contemplate the hypothetical death of European civilization. This clearly calmed some, but the catastrophe that happened in Western Europe will sober up many. 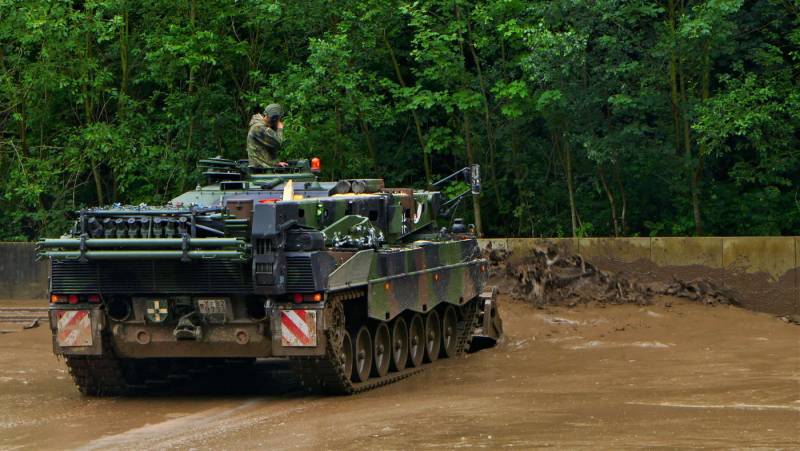 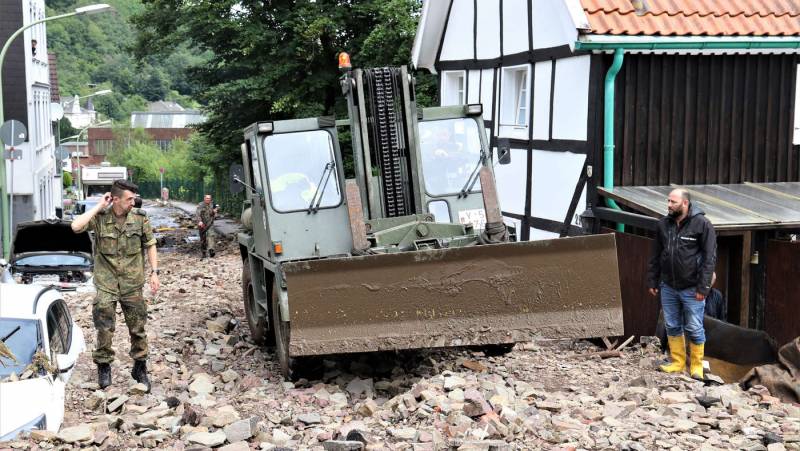 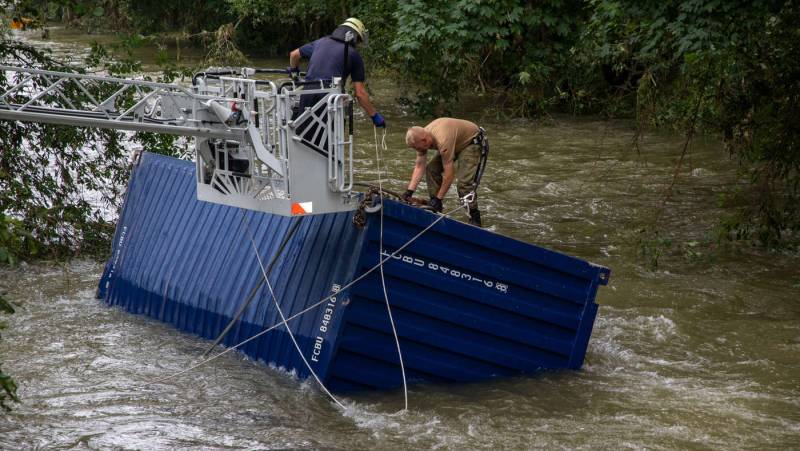 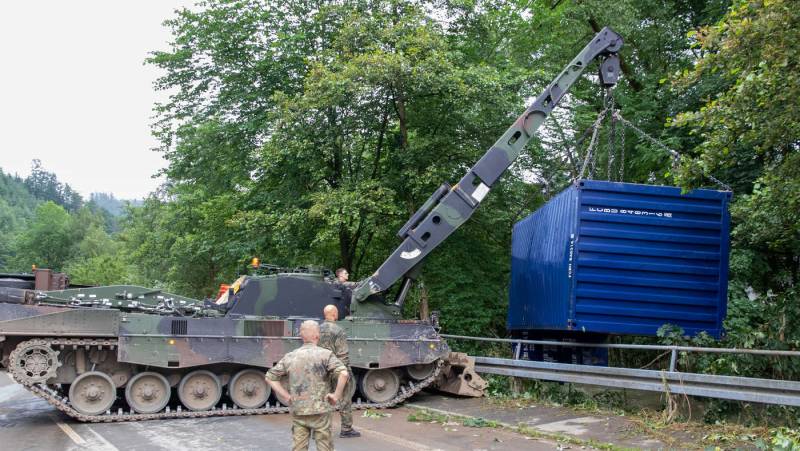 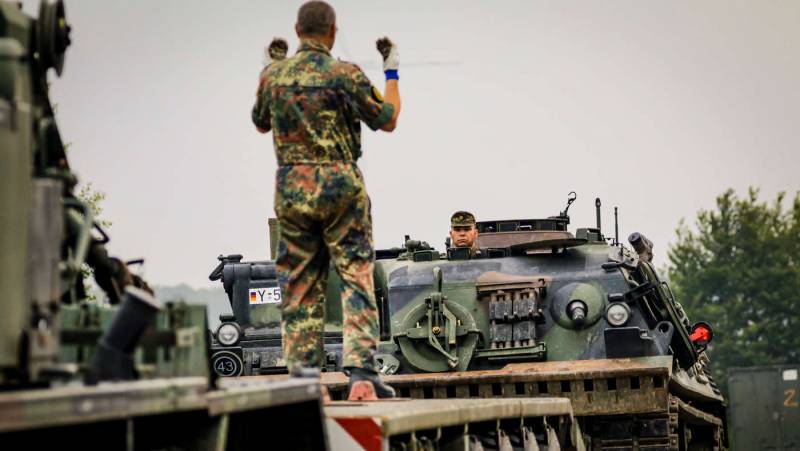 Heavy equipment against the consequences of the disaster. Source: bundeswehr.de
The rise in air temperature in some regions provokes super showers, and in others - deadly heat.

The beginning of July in North America was the hottest on record. In Canada, not accustomed to the heat, several hundred people died from the abnormal temperature. The final results of the mortality rate of the July heat will be summed up much later, when comparative numbers of excess mortality will appear. So, in the summer of 2003, the deadly heat in Europe claimed at least 70 thousand lives, which became known only five years later. The initial estimates did not exceed 30 thousand. In 2010, the record heat caused the premature death of about 55 thousand people in Russia.

Showers in Western Europe are part of a series of extreme effects of global warming that may well be repeated anywhere in the world. For example, the resort town of Sochi, bathed in rains a few weeks earlier, belongs to the same causal relationship. The only question is the anthropogenic origin of the global temperature rise. There is still no definite answer to this, however, the German leadership does not stop it at all.

In the very near future, the Bundestag will announce new measures to reduce Germany's carbon footprint. The matter may well come to the pressure of sanctions on the persistent violators of the global equilibrium of carbon dioxide. However, such a reaction is unlikely to protect against new natural disasters. Decades of the "green transition" did not affect the intensity of cataclysms in any way - every year more and more people die from the consequences of extreme heat, hurricanes and precipitation. Humanity definitely overestimates both its negative impact on global climatic processes and the very ability to stop the warming up of the Earth.