Why Ukraine turned the exercise into a permanent show 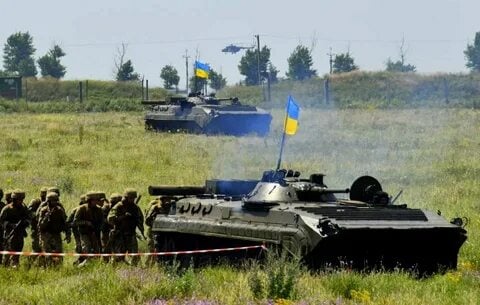 The Armed Forces of Ukraine are again conducting exercises with NATO states. This time Ukrainian-British with the participation of Americans and Canadians. Cossack Mace 2021 ("Cossack mace"). Exercises involving 2000 servicemen and more than 300 pieces of equipment. How do you want to become like some readers and write the classic "got it already with their clownery."


Indeed, for those who are seriously interested in what is called international, grandiose and other exercises in Ukraine, in fact, it looks quite pathetic from the point of view of Russian specialists. Company, maximum battalion exercises with live fire, nothing more. The rest is KSHU to coordinate joint actions of units from different countries.

However, it turns out that not all readers fully understand why there are so many exercises, why such spending, why so many foreigners on Ukrainian soil. For some reason, many people forget the exercises held in the EU. When several countries at once filed lawsuits against NATO for the destruction of roads, environmental accidents, unworthy behavior of soldiers and violation of the rights of the population of these states. But NATO behaves in the same way in Ukraine!

What NATO and Armed Forces are working on

It would seem that the question is naive. The objectives of the exercises have been announced, the activities have been carried out, and the results have been summed up. The generals of NATO and the Armed Forces of Ukraine reported to their commanders on the successful conduct of the exercises. Our readers laughed at the wretchedness of the plans of the NATO commanders and the even greater wretchedness of the execution of orders by the personnel. The officers who were to analyze the exercises reported their findings to their superiors. Everything and everything is clear.

APU. What is the Ukrainian military really practicing during the exercises? And everywhere. And at sea, and on land, and in the air. The feeling is that the Ukrainian generals got stuck somewhere in 2014 and are now in front of the militia's checkpoints. They storm enemy ground fortifications. Work out tank attacks. Teaches gunners how to suppress hardened targets.

And now something that very few people noticed. I'm talking about the enemy. The enemy of the Armed Forces of Ukraine is also from there, from 2014. Unprepared, not having aviation, poorly armed and lacking competent company and battalion-level officers. And where can they find such an adversary today?

In Russia, where most of the battalion-level officers have combat experience? In Russia, whose army is one of the three strongest armies in the world? Even in the end, the stubborn ukropatriots admit the fact that in a direct clash, the Armed Forces of Ukraine will disappear within hours, and all of Ukraine will be liberated within two or three days. The opinion of the Ukrainian Colonel Vladimir Kokorev looks very funny, a quote from the press service of the Army of the Armed Forces of Ukraine:

“They (exercises - author) will strengthen the operational capabilities of our troops, improve the level of interoperability between the units and headquarters of the Armed Forces of Ukraine and the United Kingdom, as well as the United States, Canada, the Kingdom of Sweden and other NATO members. The war in the east of Ukraine is a threat not only to Ukraine, but also to the security and stability of all countries in Europe and the world. Our partners are absolutely in solidarity on this issue. "
In Donbass, where are the miners and minibus drivers? Yes, they were seven years ago. And after the past seven years of the war, they are already experienced veterans, to whom the devil himself is not a brother. Combat experience, being on the front end, at zero, very quickly turns a worker or professor into a warrior. And I very much doubt that their training is inferior to the training of soldiers of the Armed Forces of Ukraine.

So who will the APU be used against? Ukraine today almost daily receives jabs and kicks from its "partners and allies." "Traitors" Macron and Merkel. Biden, who, although he invited Zelensky to Washington, probably forgot about it. Judging by the fact that the date of the visit has not yet been determined. The only reliable allies are the Balts and Poles.

But the most interesting thing has now begun in Ukraine itself. I mean the language law. If earlier, in the course of numerous polls of Ukrainians, especially in Russian-speaking cities, the majority said that the Russian language is not oppressed, and the Russians feel great in Ukraine, now the Russians have become legally Untermensch, subhuman or subhuman (literal translation) in this country.

Let's add to this the law on the sale of land, which is just starting to work. Add the worsening economic situation due to huge loan payments in the fall and a shortage of gas in storage facilities. Let's add problems with the pandemic ...

It seems to me that the president and the government of the Independence Square are well aware that the situation can quickly get out of control. Yesterday's performance of security veterans showed this. And in the presence of a huge amount weapons in the hands of the population, such an uprising will almost certainly turn into a civil war of all against all. And this is where the skills acquired by the Ukrainian soldiers in the exercises come in handy.

Why do Americans and NATO need exercises

Another question arises. Why should the alliance and the Americans need such expenses? NATO is not going to really fight for Ukraine. Moreover, according to the military doctrine of Russia, such a war in no way saves the bloc states from striking their territory. Then what are the goals of these exercises pursued by NATO?

First of all, such exercises should be perceived as a kind of reconnaissance in force. The fact that Crimea has been seriously fortified is clear to everyone. As well as the fact that stationary installations of missile defense, air defense and coast guard are known to those who should know it. But tracking systems, electronic warfare systems and other countermeasures are not fully known.

Passages of ships near the border, overflights of aircraft, exercises in border areas - all this is monitored by both sides. NATO is trying to "take the Russians by the nerves" and force them to use all the available means of fighting the peninsula. The Russians, however, confine themselves to training operators of electronic warfare systems to deactivate enemy weapons. "This music will be eternal", like "cat and mouse" between ships of different fleets.

The alliance's ground reconnaissance units in the border areas are doing exactly the same work. The task is, in general, similar. Identify the border defense system, establish strengths and weaknesses, and identify possible areas for some work of their own units in a special period.

In addition to the usual intelligence work, the alliance, participating in the exercises, performs another important function. This is the supply of the Armed Forces of Ukraine with weapons and ammunition for waging war in the east of Ukraine. The option, when the troops of the block, after the exercises, leave the remnants of ammunition, weapons and military equipment, has existed for a long time. Indeed, the delivery of arms or equipment back and forth to some countries is simply unprofitable. That is why this technique is left “as a gift” to the local Armed Forces.

In the case of Ukraine, the situation is somewhat different. This is not Oceania or Australia. Distances are not measured in thousands of kilometers. But the principle still works. It is impossible to openly declare that the West is supplying lethal weapons to Ukraine. Simply because Moscow, too, can begin to openly supply weapons to the Republicans. And this is the loss of the alliance. It is more difficult to deliver weapons from Europe or the United States than from Russia.

So, if we discard propaganda from all sides, we have a familiar situation when NATO is doing its usual job of creating hotbeds of tension on Russia's borders. The NATO military is not doing anything new or special. It is a fact that today the number of provocations has increased. But did anyone doubt that this would happen during the period of the reformatting of the world?

Ukraine? It seems to me that we must stop talking about the desire to preserve the integrity of this state. It is impossible to force Ukrainians to live together. If the country is destined to fall apart, if the people do not understand where they are being led, and perceives our efforts with hostility, we need to calm down, tightly deal with the republics of Donbass and not prevent the remnant of the former Ukrainian SSR from dying. Stop being a hospice for Ukraine. An artificially created country is not a living organism. This is a clone of the state. And clones don't last long.

Calmness and quick responses to the attacks of "our Western partners" in the most harsh way. As my foreman used to say: “Doesn't go through the head, goes through the legs". And he gave a start to the next 6 km march. And it did ... I think it will reach NATO too ...