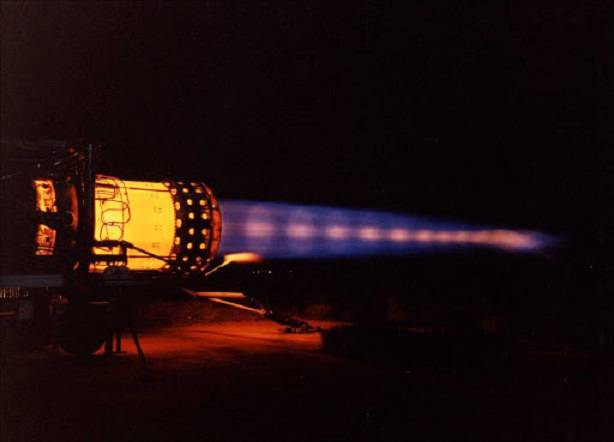 One of the most complex and technologically advanced engines is for fighters, which must combine the requirements for high maximum thrust with and without afterburner, high fuel efficiency and relatively compact dimensions. For a long time the Soviet Union and the United States went practically "head to head", from time to time one country, then another pulled ahead. The shortcomings of Soviet aircraft engines were often attributed to a small resource - the technological capabilities of the United States were always higher, often it was possible to maintain parity only due to the ingenuity of Soviet engineers and designers. However, by the time the USSR collapsed, this problem had already been practically solved. 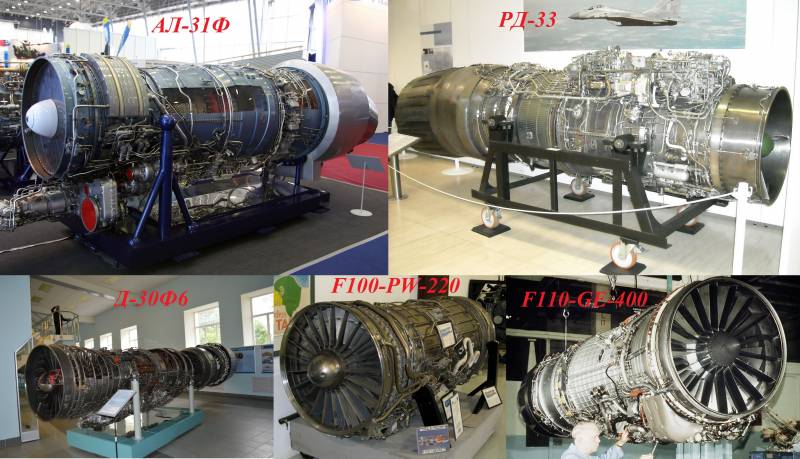 Technical characteristics of Soviet and American turbojet engines for fourth-generation aircraft
The collapse of the USSR pretty much crippled the country's aviation industry - personnel, technological competencies were lost, time wasted. It was at this moment that the development of the latest fifth-generation aircraft was underway, for which the appropriate engines were required.

Characteristics of the F119 and F-135 turbojet engines (detailed performance characteristics of the fifth-generation American turbojet engines are classified and may differ in different sources)
In Russia, the development of fifth generation fighters and engines for them dragged on. The design bureaus of Sukhoi and Mikoyan, in conditions of chronic underfunding, independently carried out work on the fifth generation fighters.

In 1997, the Sukhoi Design Bureau presented a design for the Su-47 forward-swept fighter (the S-37 theme). The D-30F6 turbojet engine from the MiG-31 fighter-interceptor was installed on the prototype, but it was planned to install a different engine on the serial machine - the P179-300. In turn, the Mikoyan Design Bureau was working on the project of the MiG-1.44 multifunctional front-line fighter, which made its first flight in 2000. The turbojet engine AL-41F, specially developed for the fifth generation aircraft with an expected afterburner thrust of 18 tons, was to be used as an engine. 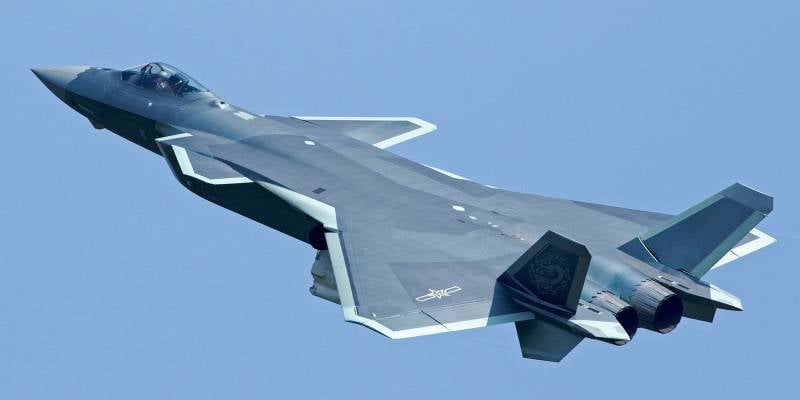 China is good at borrowing technology - something from the MiG-1.44, something from the F-22, something from the F-35
The closed projects of the Su-47 and MiG-1.44 were replaced by the project of a promising aviation complex of front-line aviation (PAK-FA), the tender for which was won by the Sukhoi Design Bureau, which ultimately created the Su-57 aircraft. It would seem that everything is fine? However, on the way to create this machine, many technical and technological problems arose. One of the most critical was the lack of a fifth-generation engine. 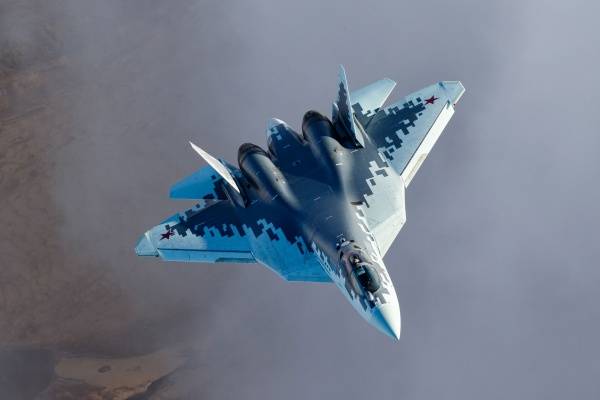 Su-57
It would seem that such an engine was created - this is the AL-41F turbojet engine, which was also flown by the MiG-1.44 in 2000. However, its dimensions did not allow it to be placed on the Su-57 fighter. On the basis of the AL-41F, the AL-41F1 turbojet engine of reduced dimensions was created, the thrust of which decreased from 18000 kgf to 15000 kgf, which is already considered insufficient for a fifth generation fighter.

Characteristics of turbojet engine AL-41F1 in comparison with engines of American fifth generation fighters
Ultimately, the AL-41F1 turbojet engine became the first stage engine for the Su-57, with which only a part of production vehicles will be produced. To replace it, an engine of the second stage is being developed under the designation "Product 30", there is not much information about it yet - the thrust on the afterburner is supposed to be 18000 kgf, which is less than that of the already mass-produced American F-135-PW-100/400 (19500 kgf). The development and testing of "Product 30" has already dragged on.

However, there was (and still exists) an alternative to the development of the AL-41F1 / AL-41F / AL-41F1 / Product 30 engine line. It was mentioned just above that the R-47-179 turbojet engine was considered as the alleged serial engine for the Su-300 - but what kind of engine is this? 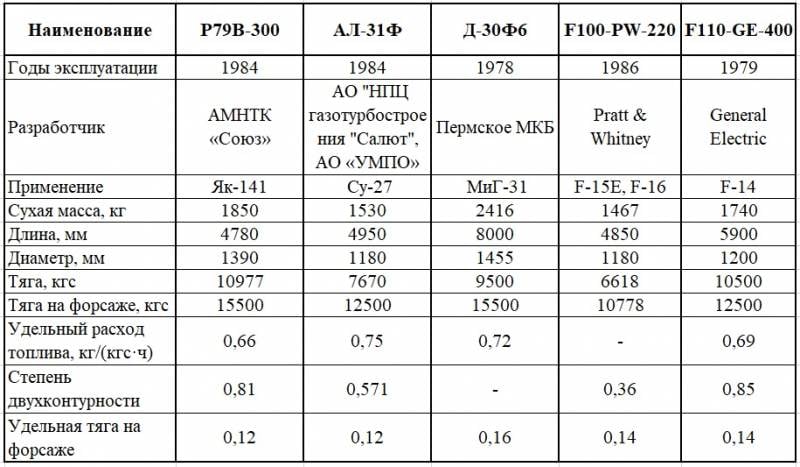 The characteristics of the turbojet engine R79V-300 in comparison with its "classmates"
The parameters of thrust in maximum and afterburner modes of the Р79В-300 engine significantly exceed the parameters of other turbojet engines of the fourth generation. The weight of the Р79В-300 is slightly higher, but do not forget that it includes a rotary nozzle, which allows using the afterburner in both horizontal and vertical modes.

On the pages of specialized publications and on the Internet, the shortage in the Russian Air Force (Air Force) of a light single-engine fighter - an analogue of the American F-16 - is often discussed. But, in fact, such an aircraft was practically created - this is the Yak-141. Yes, the Yak-141 is a VTOL aircraft, but its characteristics are quite comparable to fighters of a similar weight dimension - the MiG-29 and F-16 aircraft. 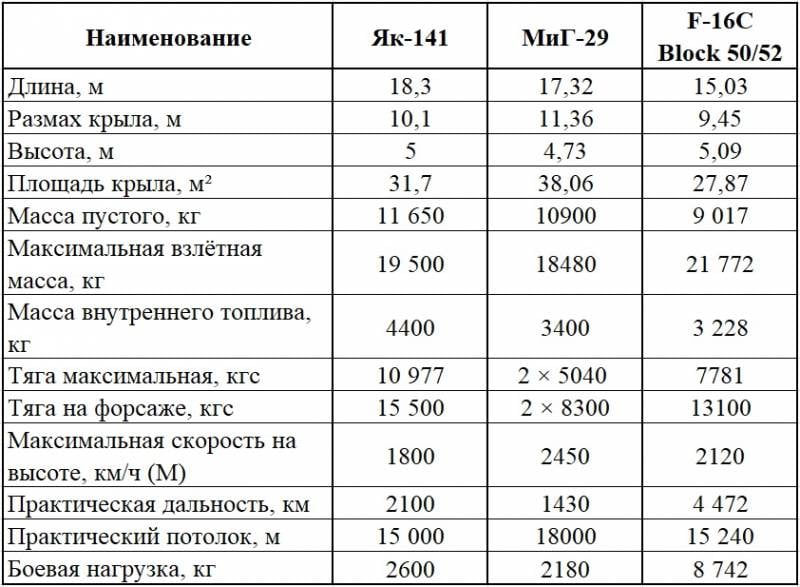 Accordingly, just as the Su-27 family of aircraft is being modernized, a light fighter based on the Yak-141 could be modernized, primarily in terms of onboard electronic equipment (avionics) and the integration of new weapons.

Concept VTOL Yak-201 - the successor of the Yak-141
Such an aircraft could be in demand both by the Russian Air Force and in foreign markets, where the same MiG-29 did not gain popularity.

In general, in this case, a certain "triumvirate" could have developed in the Russian industry, in which the Yakovlev Design Bureau would concentrate on light single-engine fighters and VTOL aircraft, the Sukhoi Design Bureau would build heavy Su-27 class fighters, and the MiG Design Bureau would develop a line of long-range heavy interceptor fighters (later multifunctional) of the MiG-31 type. Of course, the division of labor would not be compulsory, any design bureau could participate in competitions "on the topic", since competition is a blessing. 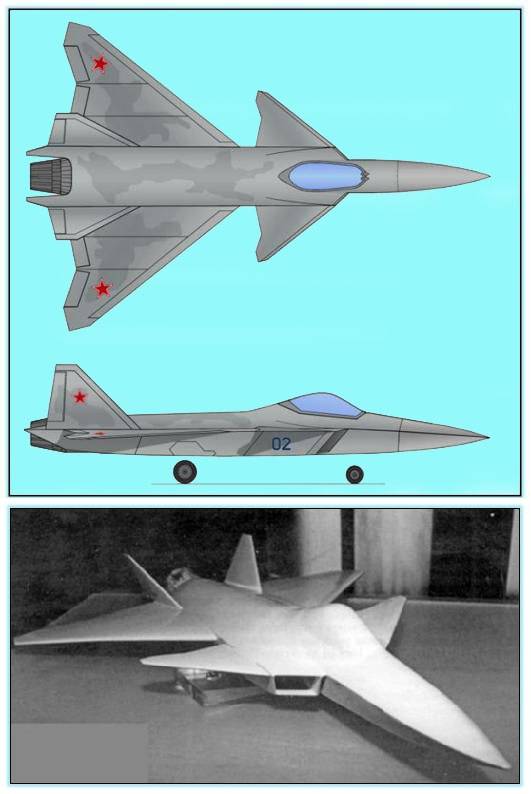 Yakovlev Design Bureau light fighter concept
But back to aircraft engines. According to unconfirmed reports, R-79-300 technologies "leaked" to China in the early 90s:

“At the Sinodefence Forum, one of the participants brought a machine translation of an article from a certain Chinese Internet resource, which allegedly said that China had received technical documentation from Russia and the R-79-300 engine itself, which was equipped with a Yak VTOL aircraft. -141.

In 1992, Russia, experiencing a deep economic crisis, decided to stop developing the Yak-141 fighter. This decision was made at the demonstration of aviation technology in Machulishchi (near Minsk, Belarus). The R-79-300 engine developed by AMNTK Soyuz was not planned to be installed on any of the aircraft. In August 1996, Russia signed an act of transferring the engine to the Chinese side, and also provided a complete set of drawings and technical documentation (the engine was transferred without a thrust vectoring nozzle). But later, in 1998, when the Asian financial crisis caused economic difficulties in Russia, China was able to obtain the R-79-300V engine nozzle with its technology.

On the basis of the R-79, the Chinese Research Institute of Gas Turbine Engines (Xi'an) began developing its own version of the WS-15. The engine is being developed in several modifications:
- WS-15-10 for the export version of the J-10M fighter;
- WS-15-13 for the promising light stealth fighter J-13;
- WS-15-CJ for a promising fighter with a short takeoff and vertical landing;
- WS-15X for the promising twin-engine heavy stealth fighter J-20.

With the successful development of the WS-15 engine, China is said to be practically closing the gap with the United States, Europe and Russia in developing advanced military jet engines. "
Despite all the negativeness of this information, it can be concluded from it that the R79V-300 turbojet engine can be used as a basis for promising aircraft engines.

The promising turbojet engine R79-300 developed on the basis of the R179V-300 engine had characteristics that corresponded to the requirements of that time for the fifth generation engines. Along with the AL-41F, it was considered as the basis for a promising fifth generation fighter, but the military chose the AL-41F, since it was believed that it could be brought to airworthiness faster. 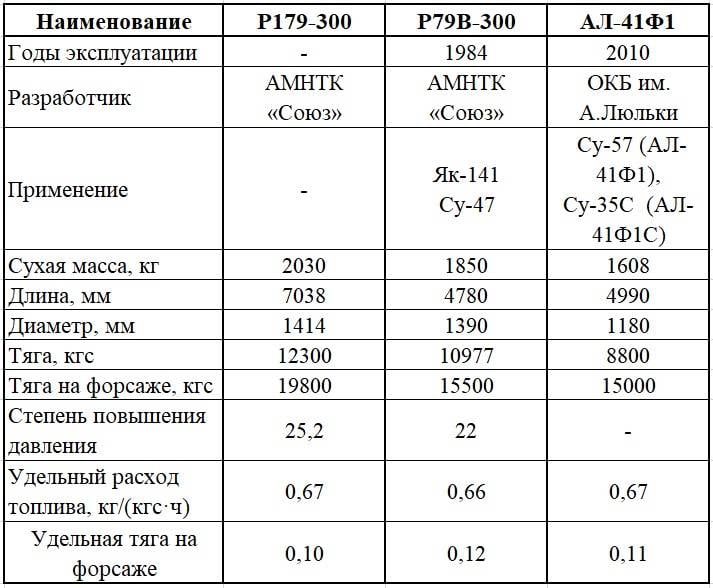 Parameters Р179-300 from the site of AMNTK "Soyuz"
Was the choice justified or were other factors intervening? Whether the military was right or wrong is an open question. The choice in favor of the AL-41F was made back in the 80s, but the "Product 30" for the Su-57 fighter, based on the AL-41F developments, has not yet been brought to the stage of readiness.

What conclusion can be drawn from this??

The engine is the basis of any combat vehicle - an airplane, a ship, tank... It is the characteristics of the engine that determine which combat vehicle will have a range and speed, combat load, armor protection, etc.

When creating complex technology, there is always a risk that the developer will come to a standstill - go down the wrong path, as a result of which there may be a delay of years, or even decades. Considering the importance of combat aircraft in general, and fighter aircraft in particular, "putting eggs in one basket" is absolutely unacceptable. The state could well afford to entrust the development of fifth generation aircraft engines to two design bureaus. In addition, as we said above, healthy competition has a very positive effect on the quality and cost of the final product.

However, it is not too late, the situation with the turbojet engine can still be corrected. AMNTK “Soyuz” has retained its technical competencies and is proactively developing engines for fifth-generation aircraft. For example, a promising turbojet engine P2020-579 was presented at the Army-300 forum, the declared characteristics of which are quite consistent with the requirements for aircraft engines for fifth-generation aircraft. 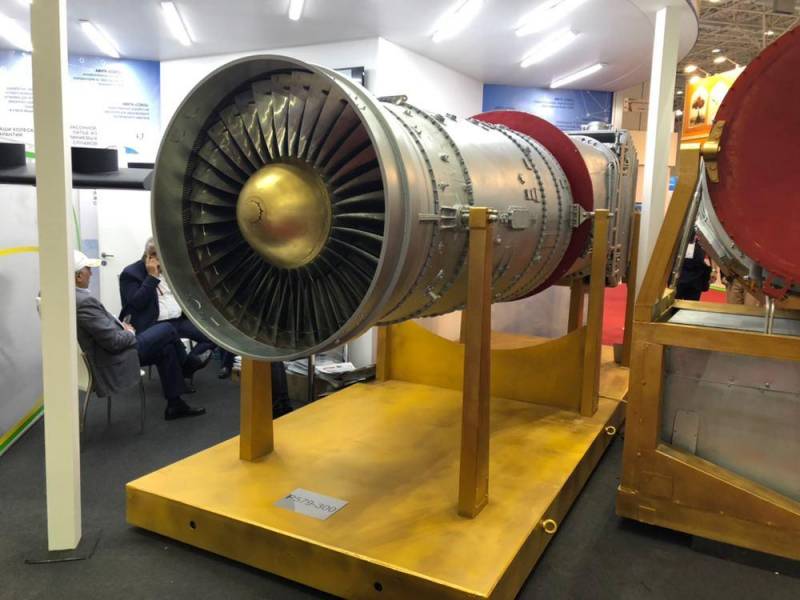 But even if the P57-579 turbojet engine is not suitable for the Su-300, then a light multifunctional fighter can be built on it, including in the VTOL version, promising long-range interception aircraft complex, or other aircraft for the needs of the Russian Air Force or for export supplies.

For example, in the news on the site of the AMNTK Soyuz it is said about the possibility of creating a promising engine based on the R579-300 turbojet engine for a strategic UAV with a flight speed of more than 3-4 M, which can also be used to launch small spacecraft.

More engines, good and different - this should be the motto of our industry. The resources of the state make it possible to finance several developments in parallel, to reduce the technical and temporary risks of creating promising products.