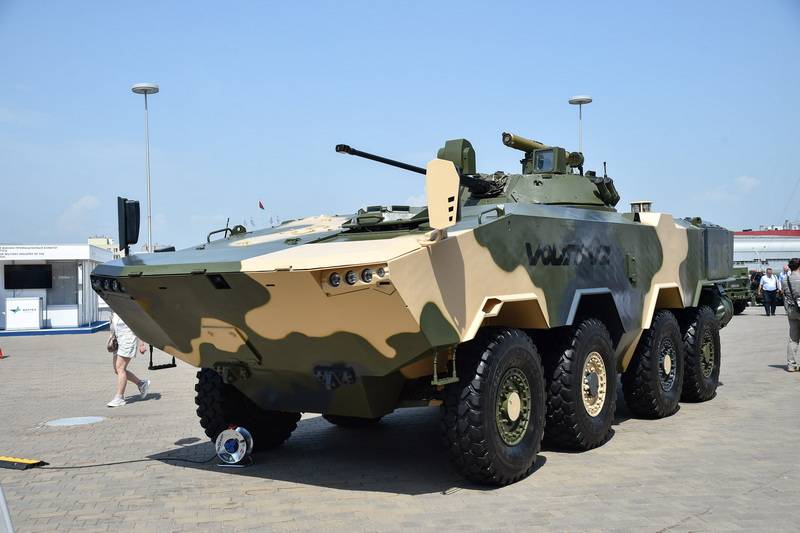 BTR Volat V2, MZKT-690003, photo: milex.belexpo.by
Before the 10th International Exhibition of Arms and Military Equipment MILEX-2021, which took place in Minsk from June 23 to 26, only renders of the new Belarusian armored personnel carrier were available to the public. At the exhibition, a full-fledged debut of the novelty took place, which was first openly demonstrated to the general public.


In the future, the new Belarusian wheeled armored personnel carrier, called the Volat V2, will be able to replace all similar wheeled and tracked vehicles of Soviet production in the army of the Republic of Belarus. Belarusians consider the new product as a potential replacement for the numerous fleet of BMP-1, BMP-2, BTR-70, BTR-80. In addition, the creation of its own armored personnel carrier will allow Minsk to abandon purchases of the BTR-82A in Russia.

The developer of the Belarusian novelty is the Minsk Wheel Tractor Plant (MZKT), well-known in Russia and in the world. For decades, the enterprise has specialized in the production of heavy-duty wheeled vehicles, including those for the armed forces. Today the military and civilian products of the company are produced under its own trade mark Volat (“Volat” in translation from the Belarusian language: giant, bogatyr).

The fact that MZKT specialists developed the first in stories The Republic of Belarus has its own armored personnel carrier, it became known only at the beginning of June 2021. Initially, in addition to the message about the creation of a domestic armored personnel carrier with a wheel formula 8x8, the Belarusian company published only renders of a new armored vehicle. At the same time, on June 23, the novelty was demonstrated at the MILEX-2021 exhibition.

It is worth noting that the MZKT company already had experience in creating wheeled armored vehicles. The company's product range includes a family of light armored vehicles MZKT-490100, built on a universal chassis with a 4x4 wheel arrangement. This armored car received the designation Volat V1. 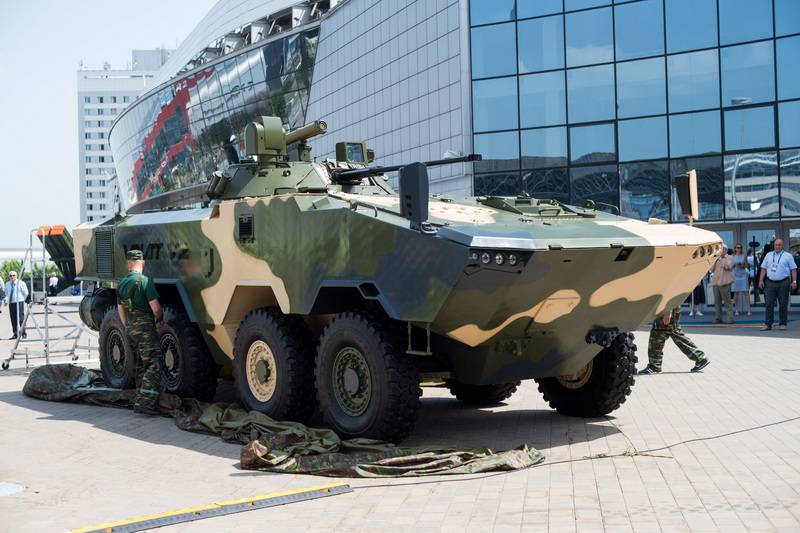 BTR Volat V2, MZKT-690003, photo: milex.belexpo.by
The prototype of the Volat V1 armored car was created in 2016. The armored vehicle turned out to be quite large and dimensional. The gross vehicle weight was 12 kg. Number of seats - 000 + 2. It is known that so far only Belarusian customers are showing interest in this MZKT development. In the Republic of Belarus, the armored car is in service with the internal troops of the Ministry of Internal Affairs, border guards and special operations forces.

What is known about the Volat V2 armored personnel carrier

The new Belarusian armored personnel carrier Volat V2 received the factory index MZKT-690003. The main purpose of the novelty is the transportation of personnel to the place of the combat mission, fire support of the infantry in combat conditions, the protection of the landing force from small arms fire. weaponsas well as explosives. In addition, the Volat V2 armored personnel carrier can be used to destroy enemy infantry and anti-tank weapons, lightly armored vehicles, and low-speed air targets. 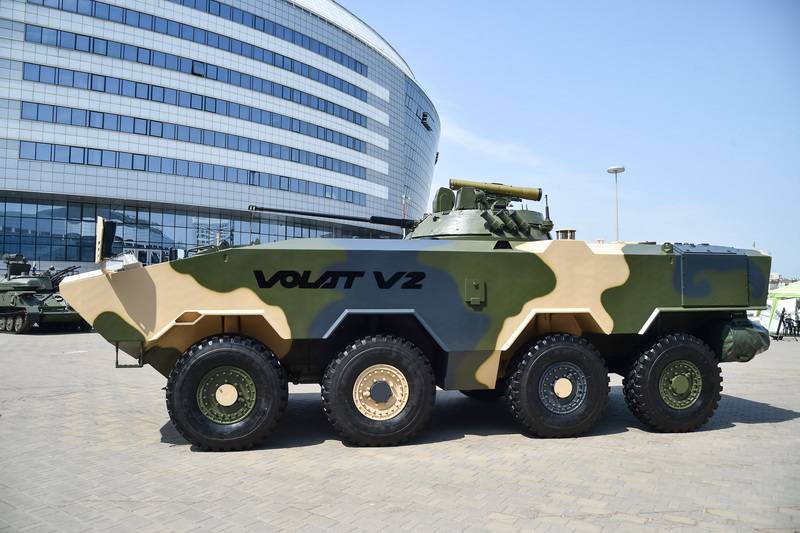 BTR Volat V2, MZKT-690003, photo: milex.belexpo.by
An interesting feature of the novelty is the presence of a separate diesel generator set on board. Its presence provides the armored vehicle with a relatively high level of autonomy. In particular, the Volat V2 armored personnel carrier remains fully operational, remaining in ambush for a long time with the main engine muted. Also, this diesel generator set allows the armored personnel carrier to maintain partial combat capability in the event of a technical failure or combat damage to the main power plant.

The main power plant is a Chinese WP13.550 inline six-cylinder diesel engine with an output of 550 hp. from. The production of these engines has been established in the Republic of Belarus at the MAZ-Veychay joint venture on the territory of the Great Stone industrial park. The power of the diesel engine, which works in conjunction with a six-speed automatic gearbox manufactured by MZKT, is enough to provide a 20-ton combat vehicle with a maximum highway speed of up to 110 km / h, and a floating speed of 10 km / h.

So far, nothing is known about the overall dimensions of the novelty. Visually, the length of the armored personnel carrier is comparable to numerous analogues and, most likely, is in the region of 8 meters. At the same time, the clearance of a combat vehicle is known - 520 mm. Operation of the Volat V2 armored personnel carrier is possible at ambient temperatures from -40 to +40 degrees Celsius.

The layout and armament of the Volat V2 armored personnel carrier 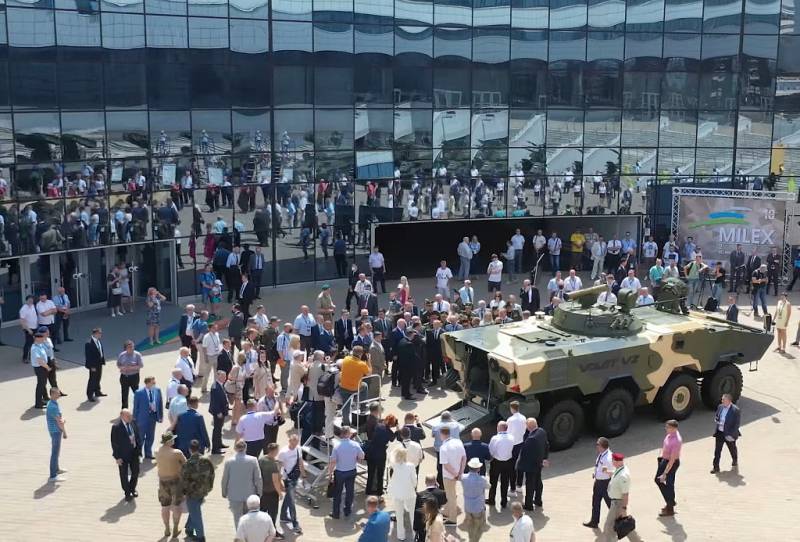 BTR Volat V2, MZKT-690003, photo: volatdefence.com
Mine protection allows the detonation of a high-explosive anti-tank mine (explosive mass up to 6 kg) under the wheel or bottom of the combat vehicle. Obviously, the level of booking can be increased based on the wishes of the customer. True, this will lead to an increase in the combat mass of the vehicle and, possibly, to a loss of buoyancy.

To protect the crew and troops from the consequences of being blown up by mines or improvised explosive devices, energy-absorbing seats and a suspended floor are specially installed in the armored personnel carrier. These technical solutions should protect the fighters in the crew compartment from the impact of the shock wave, as well as from the ingress of debris.

The fighting compartment of the new Belarusian armored personnel carrier allows the installation of a standard combat module BMP-2. The armored personnel carrier, which was demonstrated at the exhibition in Minsk, was equipped with a BMP-2 tower, modernized by the Belarusian company Peleng. Earlier, for the modernization of the BMP-2, this company developed the "Rubezh-M" thermal imaging sight, which made it possible to increase the range and effectiveness of target recognition and simplify the work of the commander and gunner.

The composition of the armament remains the same and does not differ from that of the BMP-2. The vehicle shown at the exhibition was equipped with a turret with a 30-mm 2A42 automatic cannon with two-belt feed (the gun is stabilized in two planes) and a 7,62-mm PKT machine gun paired with it. Also on the tower there was a launcher for launching an ATGM.