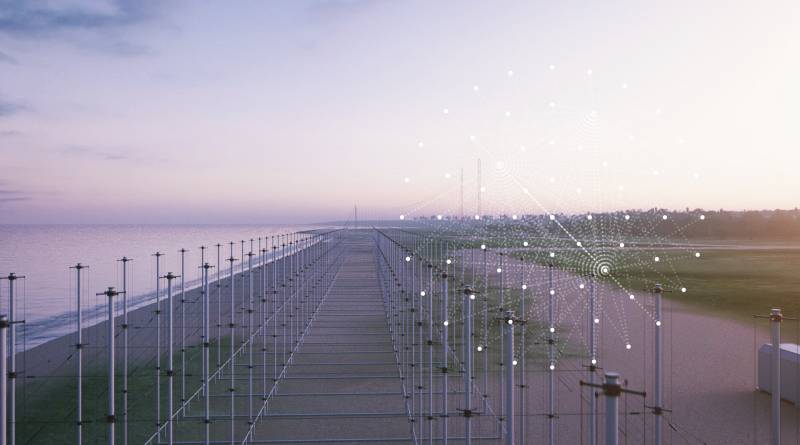 The tasks of timely detection of surface and air targets, incl. which are a threat to the country's maritime borders, in our army they are solved with the help of several types of radar systems. One of the newest and most advanced models of this class is the Sunflower over-the-horizon radar. Several such facilities have already been deployed along the perimeter of the state. Construction of new stations is expected for their needs and for export.

Work on the future "Podslonukh" began in the nineties, when the need arose to develop a new class of radar. By that time, the Russian armed forces had an entire network of coastal stations, which, however, did not meet all the requirements. Short-range systems made it possible to observe territorial waters, and the minimum viewing range of over-the-horizon radars is hundreds of kilometers. Thus, the exclusive economic zone was left without radar cover.

By 1999, the Scientific Research Institute of Long-Range Radio Communication (NPK "NIIDAR") completed part of the research and design work, after which it built a so-called so-called "NIIDAR" near Petropavlovsk-Kamchatsky Radar surface wave "Taurus". It was a mock-up with limited capabilities, but it showed all the possibilities and advantages of new technologies.

The Taurus product reportedly caught the attention of an unnamed foreign customer, resulting in an order for the production and deployment of such a radar. In addition, the developments of the project were used to create a new station "Sunflower". This time it was about a full-fledged over-the-horizon radar with all the necessary capabilities.

By the middle of the 2005s, a prototype "Sunflower" was deployed in Kamchatka. In 2006-2008. passed state tests, after which the station was put on experimental combat duty. Already in 2009-2013. the second radar station, built near the city of Vladivostok, began to work. In XNUMX, the coastal troops of the Caspian flotilla. 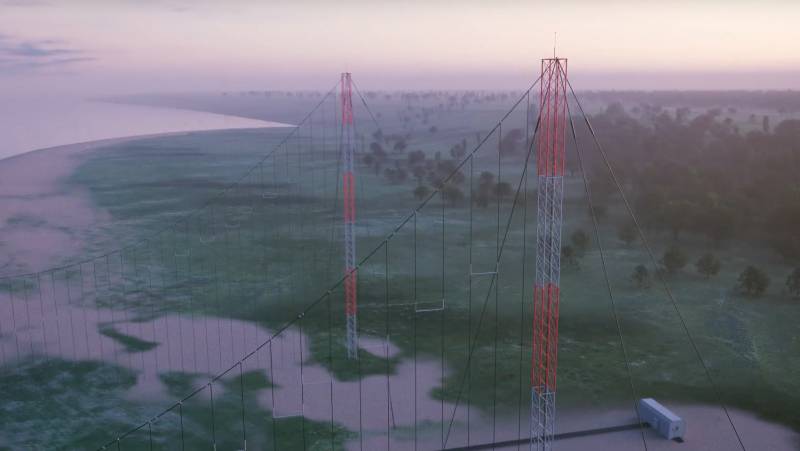 The strategic northern direction received special attention in the context of radar. In 2017, it was planned to complete the construction and put on alert the first "Sunflower" in the Arctic, it was erected on Novaya Zemlya. It was reported that in the foreseeable future, five more such objects will appear in the region, and this will create a continuous radar field over almost all the northern borders of the country.

The existing complexes "Sunflower" are constantly on duty and are regularly involved in providing various events. So, with their help, control over the conduct of exercises of the fleet and combat aviation... Also, radar calculations track the activity of third countries trying to follow Russian maneuvers.

On the basis of the Podsolnukh radar, an export modification Podsolnukh-E was created for the Russian armed forces. For the first time, materials on this project were presented in 2007 - almost immediately after the first own station took over the duty. Subsequently, the export radar was repeatedly advertised at various exhibitions and salons. In addition, the project was developed. Since 2015, customers have been offered the upgraded Podsolnukh-E with improved performance.

The export radar is expected to be delivered to the first foreign customer in the near future. Back in 2016, NPK NIIDAR with its Podsolnukh-E won the tender of an unnamed foreign state. A contract is reportedly expected to be signed at the moment, followed by the manufacture and handover of finished products.

New orders expected. Several factors will contribute to their receipt. First of all, this is the minimum number of direct competitors in the form of foreign developments with a similar level of performance. In addition, "Podsolnukh-E" shows higher tactical and technical characteristics. The developers also mention that in the 2016 tender, one of the arguments in favor of their product was the possibility of deploying all components in one position and without being separated by tens or hundreds of kilometers. 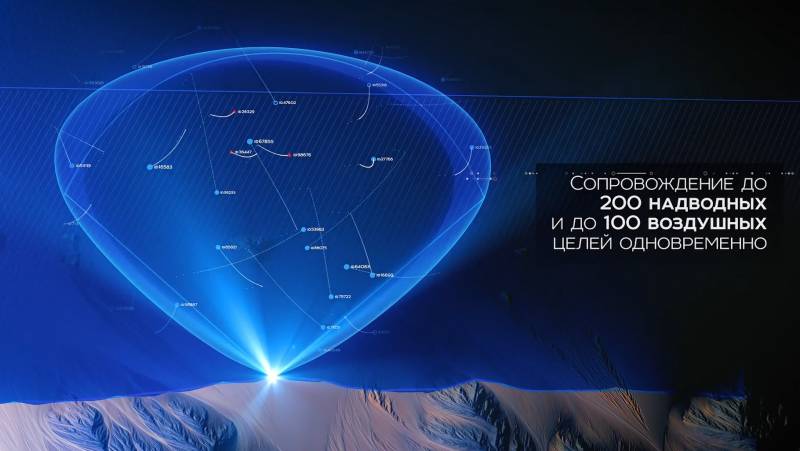 Radar "Sunflower" in basic and export modifications is made as a set of tools for different purposes. The station consists of two posts, transmitting and receiving. They include several containers with radio equipment, a number of masts with antenna-feeder devices, as well as various auxiliary systems and devices.

It is proposed to place transmitting and receiving posts on the sea coast at a distance of 500 m to 3,5 km from each other. With the help of standard means of communication, the radar is integrated into the general circuits of data transmission and command and control.

"Sunflower" operates in the decimeter range and is a so-called. Surface wave radar. The station generates and emits HF waves of vertical polarization and directs them along the sea surface. Due to the phenomenon of diffraction, waves propagate beyond the horizon. Accordingly, the theoretically possible detection range increases.

The radar includes a high-performance computing complex capable of simultaneously tracking up to 200 surface and 100 air targets. The system ties traces and stores all data about the target, from entering the detection area to exiting it. Information about the situation is transmitted to the command post.

The exact characteristics of the radar for the Russian fleet have not been disclosed, but the parameters of the export modification have been published. "Podsolnukh-E" of the modernized version is capable of observing a sector with a width of 100-200 degrees at ranges from 15 to 450 km, depending on the parameters of the target. 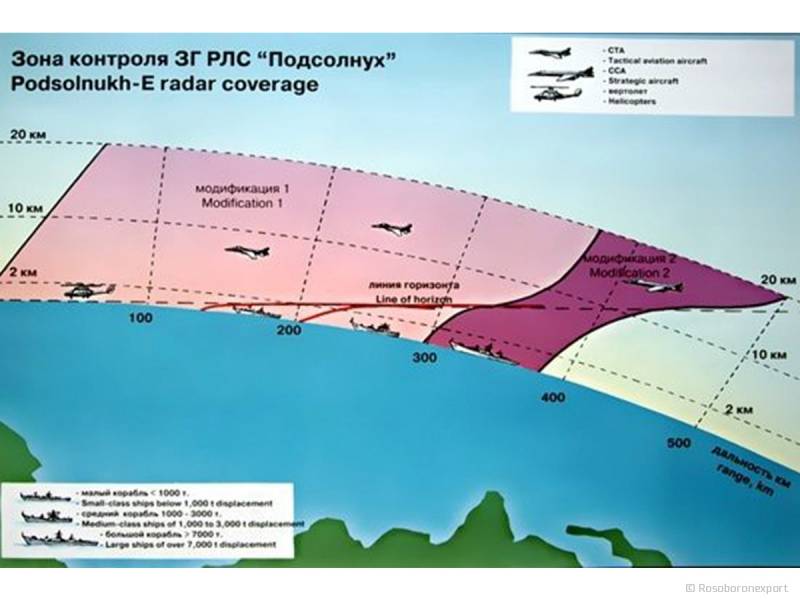 The detection range of large surface targets with a displacement of more than 5 thousand tons reaches 300 km. The maximum range for air targets is 450 km, provided that the aircraft is at an altitude of more than 9000 m. It is argued that targets made with the use of stealth technologies are successfully detected in the entire range of ranges.

Radar "Podsolnukh" in Russian and export versions are designed to track air and surface conditions in an area with a radius of hundreds of kilometers. This is enough to control the exclusive economic zone and some area outside of it. At a greater range, observation tasks are transferred to other radar stations. The combined use of several types of radar allows an almost continuous radar field from the coast to the ocean zone.

With the help of "Sunflowers", the situation is now being monitored off the coast of Kamchatka and Primorye, as well as in the Caspian Sea and around Novaya Zemlya. In addition, it is known about plans to build several new similar stations. So far, we are talking only about the Arctic, but the possibility of their appearance in other directions cannot be ruled out. It should be borne in mind that modern "Sunflowers" are not the only means of protecting the country's sea borders.

Thus, along the perimeter of the Russian borders, incl. sea, a multicomponent layered radar surveillance system for the surrounding regions is gradually being formed. It ensures the timely detection of a missile or air attack, and in some areas is also responsible for protecting economic interests. Apparently, in the future, the areas of responsibility and the potential of such a system will continue to grow - both due to the "Sunflower", and with the help of other modern developments.