4 September 2012
41
During the Great Patriotic Design Bureau, Yakovlev worked with extraordinary stress, which could be considered normal for such a difficult time. With great efforts, the most successful Soviet fighters were designed and introduced into production. "Yaks" during the war were produced at 15 aircraft plants. Every day, up to 38 Yak fighters rolled off the assembly line. The fleet of these beautiful fighters was at the end of the war almost 2/3 of the entire Soviet fighter aviation. The words "Yak" and the fighter in Russian became synonymous, and Vladimir Vysotsky even wrote the song "Yak-fighter."


Over the 1941-1945 years, more than 40 000 Yak fighters were released: 35 086 combat fighters Yak-1, Yak-7, Yak-9, Yak-3 and dozens of their various modifications and options, 4 955-X-9X-9J-9J-9J-9J-9J-9J-11N-9J-9J-3X-6X-6X-6X-6X-6X-6X-6X-6X-6X-2-18 X-NUMX 1942 12 X-NUMX fighter jets and more than a dozen of various modifications and variants, 1944-25-X-9X shar-rifled projets, X-YUM-XNUMX fighter jets and dozens of various modifications and options, XNUMX XNUMX-YN-XNUMX and X-10NXX XNUMX X-NUMX fighter jets were released. also used as combat. The Yakovlev OKB achieved its most important successes at the moment when it was most needed by the Motherland. Among the few Soviet enterprises during the Great Patriotic War, it was awarded: September XNUMX of the Year of Lenin with the Order of Lenin and November November XNUMX of XNUMX of the Order of the Red Banner. Flying on the Yak fighter, Alexander Pokryshkin, the Hero of the Soviet Union, received his first Gold Star three times. Of the XNUMX Soviet fighter pilots who were twice Heroes of the Soviet Union, most or part of the war fought on the Yaks, while the French pilots from the Normandie-Neman squadron once fought on the Yaks. 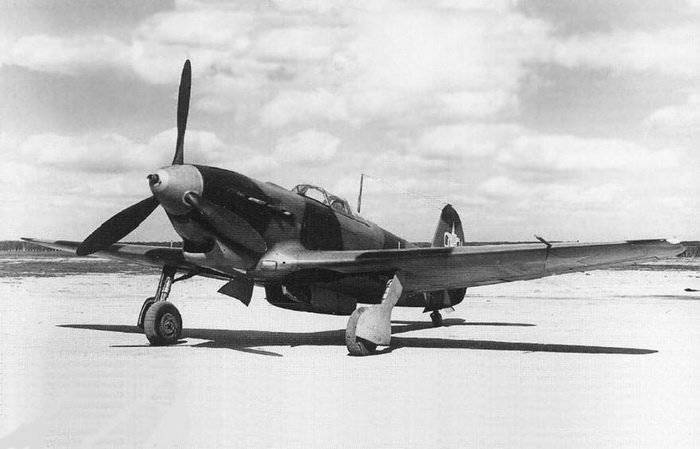 The Yak-1 fighter was created under the guidance of designer A. S. Yakovlev and allowed to be tested in the 1940 year. The fighter was a cantilever monoplane with a mixed design that was reasonably well adapted to mass production conditions. The Yak-1 was one of the easiest fighters of its time. The take-off weight of the aircraft was equal to 2 847 kg., With the weight of an empty aircraft - 2 347 kg. The design of the fighter was mixed: the frame of the fuselage is shaped, welded from steel chromansil pipes. The nose part is sheathed by duralumin, tail - linen. The wing of the plane is wooden, pasted over with a canvas. The frame of the feathering is duralumin and is also sheathed in canvas. With the VK-105P engine, the Yak-1 could reach speeds up to 580 km / h and gained altitude in 5 000 meters in 5,4 minutes. In its combat and aerobatic qualities, it was one of the best front-line fighters.

The armament of the machine included a 1 ShVAK 20 mm cannon, fire was fired through the hollow shaft of the screw reducer, as well as the 2 X-synchronous rapid-fire machine-gun ShKAS rifle caliber. The peculiarity of this fighter because of its low weight was ease of piloting and good stability. In the first half of World War II, the aircraft was one of the main Soviet fighters. It is quite harmoniously combined weapons and excellent flight characteristics. Compared to the main German fighter Bf-109E, the Yak-1 possessed superiority in all types of maneuvers and in speed. But with the advent of a more sophisticated Bf-109F, its flight characteristics became insufficient. 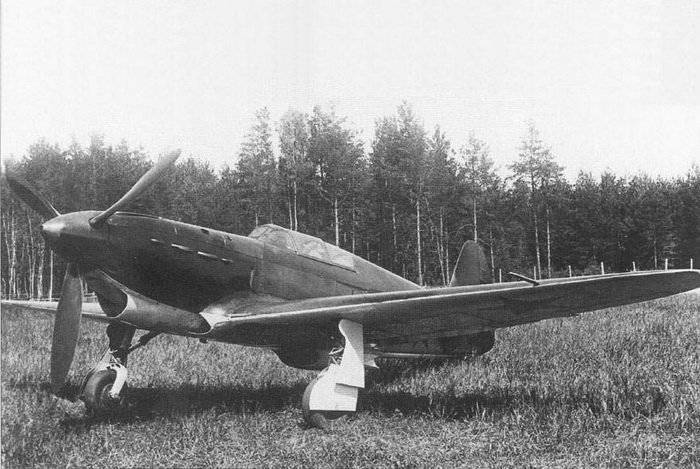 Understanding this, in the Yakovlev Design Bureau, work was carried out to improve its combat potential. The aircraft has been modified several times. It changed the engine and weapons. When replacing the engine with an M-105PF, the aircraft also received new weapons: instead of 2-x 7,62-mm ShKAS machine guns, they installed a more powerful 12,7-mm UB machine gun on it. Work was also carried out to improve the aerodynamics of the fighter, it improved the view of the upper hemisphere from the cockpit and a radio appeared. All these measures allowed us to continuously maintain the excellent fighting qualities of the fighter, which remained in service with the Air Force throughout the war. During this time, 8 721 Yak-1 aircraft of all types was produced at the plants.

Performance characteristics of the Yak-1:

Yak-7 was a Soviet single-engine fighter created shortly after the outbreak of World War II. The aircraft was designed on the basis of the Yak-7UTI training center, on which they mounted full-fledged armament, installed an armored seat, retrofitted gas tanks, a system for filling gas tanks with neutral gas from a carbon dioxide cylinder. In this case, the photo-cinema machine gun was dismantled, equipment and controls were removed from the instructor’s rear cockpit. After that, it became possible to use it for transferring small cargoes, for technical support when relocating parts, for delivering pilots from an emergency landing site, installing an additional fuel tank, etc. 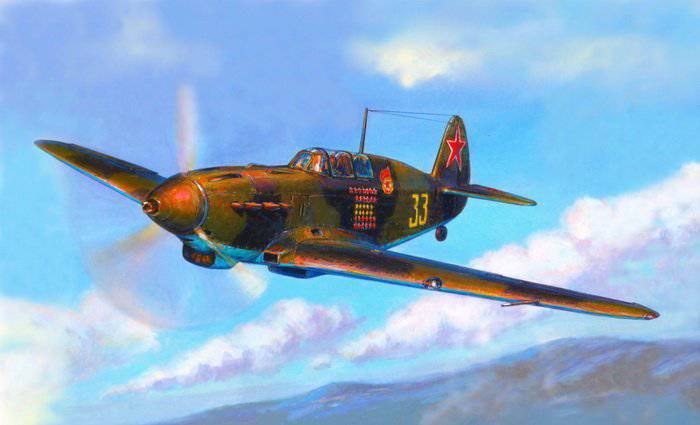 The design of the Yak-7B repeated the design of the Yak-1 fighter and was mixed. At the same time, in comparison with the Yak-1, the single Yak-7 was a more advanced fighter with the following advantages: the engine was detachable, which allowed the aircraft to be modified to a different engine; the size of the wheels of the chassis is now fully consistent with the flight weight of the machine; due to the forward shift of the fighter center, the longitudinal stability has been significantly improved; the changed ratio between the stabilizer and elevator areas increased the elevator deflection and resulted in improved handling; an increase in the anti-capping angle by 1,5 ° to some extent reduced the risk of the vehicle nosing under heavy braking, and also reduced the path length during landing.

At the Yak-7B, the ShKAS machine guns were replaced with UBS, and the receiving and transmitting station RSI-4 was installed with a two-beam antenna and a mast. The fighter variants, which were intended for air defense, were fitted with a landing light, a radio-industrial companion RPK-10, and an electric-light signaling of the retracted landing gear position. The version of the aircraft with UBS machine guns met the requirements of the front and could be used against both air and ground targets. The aircraft was produced from 1942 year, 6399 machines of all modifications, including training ones, were released. The most massive model Yak-7B was produced from 1942 to 1944 year, all were collected 5120 fighters. 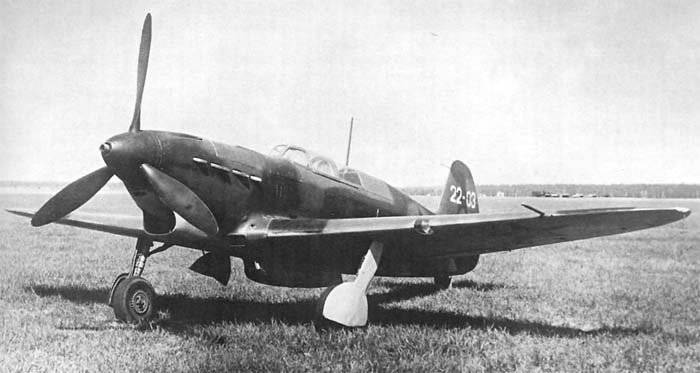 Performance characteristics of the Yak-7B:

The Yak-9 fighter was created by the Yakovlev Design Bureau at the end of 1942 and became the most massive Soviet fighter during the period of the Great Patriotic War. The experience of the first year of the war clearly showed that all Soviet fighters (to varying degrees) have one weak feature - insufficient power-to-hand ratio (the ratio of engine power to aircraft mass). That is why they were inferior to the new versions of the Messerschmitt fighter Bf-109F and Bf-109G in vertical maneuver and rate of climb. The fighter’s power supply could be increased either by replacing the engine with a more powerful one, or by reducing the payload (by loosening weapons, reducing fuel, etc.), or by facilitating the design by replacing wooden elements with metal ones. In the year 1942 in the USSR there was a real opportunity to use light aluminum alloys in the construction of at least some aircraft, and the Yak-9 became one of them.

When creating this aircraft, the Yak-7B fighter with the M-105PF engine was taken as the basis. When creating a new fighter, the wooden wing spars were replaced with metal ones. Only one this event allowed to throw 150 kg of weight. The armament of the fighter consisted of a cannon and a large-caliber synchronous machine gun. The aircraft received a slightly increased fuel capacity and a better view from the cockpit. Production of the Yak-9 fighter began at the end of the year 1942. The car had excellent maneuverability and excellent aerobatic qualities, was stable in control. Compared to the Yak-1 and the Yak-7B, the new fighter had greater speed, climb rate and better vertical maneuver. This fighter could successfully fight the best German cars. 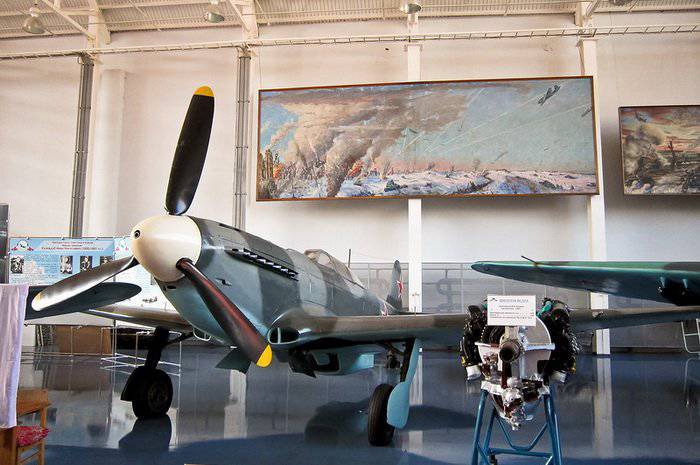 After developing and bringing to the series a new powerful VK-107 engine designed by V. Ya. Klimov, Yakovlev had a rare opportunity to seriously improve the flight qualities of the Yak-9 fighter. At the very end of 1943, a new modification of the Yak-9U was created. This fighter had an excellent rate of climb and the highest speed, its performance was a record for the start of the 1944 of the year. Fighter Yak-9U favorably distinguished for its excellent maneuverability in both vertical and horizontal planes. In 1944, it began mass production, and the plane went to the front. After the war, its release continued for several more years. Yak-9U became one of the last piston fighters produced in the USSR. During the war years, 16 769 Yak-9 fighters of all modifications were released. 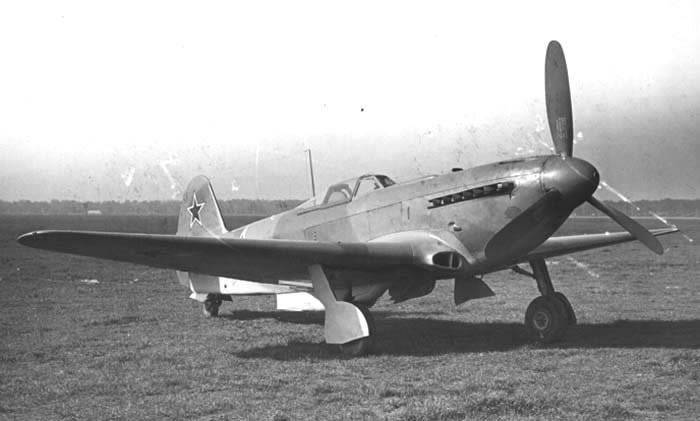 Performance characteristics of the Yak-9U:

The Yak-3 fighter was created by Yakovlev Design Bureau in 1943. With its design, the main emphasis was placed on a sharp increase in its flight data, which was to provide the aircraft with a decisive superiority in air battles with German fighters. Since at that time the designers did not have a suitable engine, they focused on improving the weight and aerodynamic perfection of the fighter. The basis was to take the well-known Yak-1. In this case, a significant reduction in aerodynamic drag was achieved by improving individual layout elements and reducing the size of the wing. 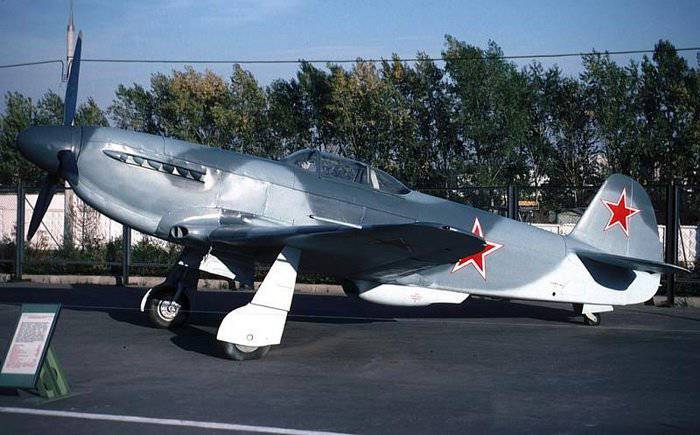 In comparison with the Yak-1, the new fighter has become lighter almost on the 200 kg. The engine builders, who conducted the second forcing of the M-105PF engine, raised their power by another 80 hp. The new engine received the designation M-105PF-2 (with 1944, VK-105PF-2). The serial production of the Yak-3 began in the 1944 year. Air battles demonstrated the superiority of the new fighter over enemy aircraft. The actions of the Soviet aviation units that had this fighter in service were distinguished by very high efficiency. French pilots from the Normandy-Neman regiment fought on the Yak-3. In terms of tactical use, the Yak-3 could not replace other fighters with more powerful weapons or range, but it complemented them perfectly. Yak-3 embodied the idea of ​​a light, maneuverable and high-speed fighter.

Of the shortcomings of the fighter pilots noted a small supply of fuel, which made the free hunt on this machine ineffective. Therefore, the Yak-3 is usually used on call ground posts. Another drawback was the weak attachment of the upper wing skin; even cases of its detachment at the fighter’s exit from a dive with the maximum speed were recorded. Knowing about this feature, the pilots tried not to enter the unacceptable mode, so the cases with the collapse of the skin stopped, and the maneuverable and light aircraft quickly gained popularity. Yak-3 was one of the most sophisticated Soviet fighters of the war, its design was different rationality and simplicity. In all, during the war years, the 4 848 Yak-3 fighters were launched. 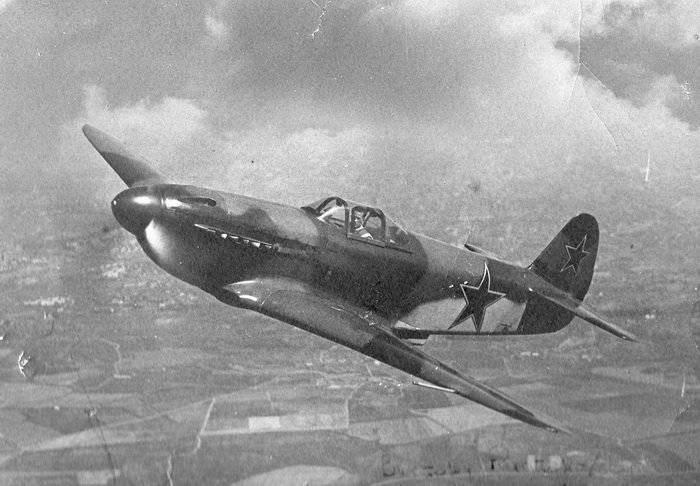 Performance characteristics of the Yak-3:

During the Great Patriotic War, the Yakovlev Design Bureau worked with unusual stress, normal for that difficult time. With tremendous efforts, the most successful Soviet fighters were created. “Yaks” were produced at 15 plants. Up to 38 cars left the conveyors daily. The park of these beautiful heavenly predators accounted for two-thirds of the entire Soviet fighter aviation. The words "Yak" and "Fighter" have become synonymous. This film talks about stories the creation and features of these wonderful machines.

Ctrl Enter
Noticed oshЫbku Highlight text and press. Ctrl + Enter
We are
Aviation of the Red Army of the Great Patriotic War (part of 8) - MiG and La FightersThe award system of the Soviet Army
Military Reviewin Yandex News
Military Reviewin Google News
41 comment
Information
Dear reader, to leave comments on the publication, you must to register.