Treason at the level of the Minister of Defense. Or as a “general in a skirt” disgracing the entire Russian army and its commander in chief 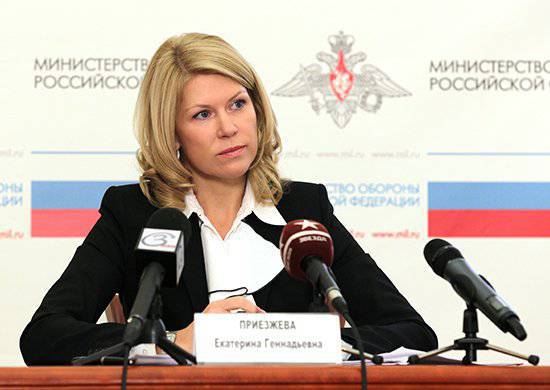 Head of the Department of Education of the Ministry of Defense Ekaterina Priezheva is a very attractive blonde. The nails of her well-groomed hands, she prefers to paint in dark colors. Now, with a sweet smile, she is stifling her nails on the legendary GK Military Aerospace Defense Academy. Zhukov. And the Minister of Defense, who should rein in his subordinate, is rather silent. Despite the requirements of the President - the Supreme Commander.

To destroy military academies by mergers and acquisitions is the favorite fun of the current civilian leaders of the military department. Vyacheslav Tetekin, a member of the State Duma Committee on Defense, went along well with these “mergers”: “The mountain and dental institutes merge together because there is a drilling-drilling process here and there.”

Recently we wrote about how, having translated the N.E. Air Force Academy. Zhukovsky and Yu.A. Gagarin in a certain "Voronezh military educational and scientific center of the Air Force", the grief-reformers lost all scientific personnel on the way ("AN" No. XXUMX). Now they have begun the pride of the national aerospace defense - the Military Academy of Aerospace Defense (VA EKR) named after G.K. Zhukov (Tver).

Initially, there was an order of the Minister of Defense Anatoly Serdyukov to reduce the staff from July 1 and completely liquidate the academy from December this year. The noise rose incredible. Still - "Zhukovka" is unique. It was there, back in the 1 of the last century, that the concepts of “aerospace defense”, “strategic aerospace operation” were introduced for the first time, the principles of aerospace defense, organization and structure were developed. Hearings were held in the Public Chamber and the State Duma Defense Committee. All known military leaders stood up for the academy. Dozens of letters were sent to President Vladimir Putin with the signatures of such people that it was simply impossible to dismiss them. And it would seem that they won.

The Academy was promised to be made a branch of the Military Space Academy (AFV) named after A.F. Mozhaisky (St. Petersburg). And nothing that in Tver prepared the commanders of the units, the command staff of the corps, divisions and armies of the air defense. And in St. Petersburg - junior engineering officers for the units, providing launches and flights of spacecraft. “The main thing is that they have been preserved,” the vekoshniki sighed happily.

The second part of Marlezonsky ballet

But it was not there. Not such people Prizezhev and Serdyukov, to retreat from their plans. We decided to strangle not by hook or by crook. And slyly, in Jesuit.

More than 200 foreign students from Algeria, Syria, India and other countries study at the Academy. Of course, they learn not for free, bringing millions of dollars a year to the Russian treasury. But at the same time, it is Zhukovka that requires a diploma. Plus, with these countries Russia has billions weapons contracts. They say that in the Ministry of Defense of Algeria, they grabbed their heads when they learned about the liquidation of the academy. And they directly declared to Moscow: “If you do not fully train our cadets, then we will not purchase your air defense weapons. Since there will simply be nobody to work on it. ” And this is not millions, it is billions of dollars.

Apparently, from behind the walls of the Kremlin there was such a formidable shout that they decided to play a little back in the Russian Pentagon. And Ms. Priezheva is preparing a directive on the temporary suspension of the liquidation of the academy. Defense Minister Serdyukov gladly signs it. And the essence of the directive is simple - the academy will be destroyed anyway, but later. When foreign cadets go home.

“It is proposed to complete the training of foreign military personnel for contractual commitments made in the VA EKR, reorganizing it into the GCA branch with subsequent liquidation after completion of the training. For this period, continue to use the funds of the Air Force of the East Kazakhstan region, primarily the system of training command posts for the training of specialists in the Aerospace Defense of the Armed Forces of the Russian Federation. The proposal was agreed with the commander of the Aerospace Defense Forces, ”writes Priezheva in a directive.

The latest issue of foreign cadets is 2015 year. Year of the sentence of the academy.

So, simply and with taste. What is the words of President Putin for Priezezhevoy or Serdyukov ?! Just think, said many times that the forces of Aerospace Defense are the most important means of deterring a potential enemy. Yes, do not care and forget.

Before arriving at the Ministry of Defense, Prizezhev worked as the head of the department of taxes and duties on alcohol and tobacco products of the FTS. FTS then headed Serdyukov. Isn’t it too expensive for us to put a habit on highly professional positions that are completely incompetent in military affairs of tax specialists? After all, it is not only lost and "sawn" billions. The most important thing is the defense of a country that, under the strict guidance of such “personalities,” is already striving for negative values.

Outdated material and technical base was called one of the main motives for the destruction of the VA VKO. Some numbers.

Academy. Zhukova possesses a unique system from 36 modern interconnected training command posts (KP) RKO and air defense - from the tactical to the operational-strategic level. The majority of CPs are installed permanently, in an educational version, and their transportation is impossible. The total cost of the system is about a billion rubles. Moreover, it underwent a complete modernization in 2011 – 2012. Only in the Academy have been developed and widely used imitation complexes, allowing to simulate all the processes of confrontation in the aerospace space ("Altek", "Spectrum", "Kolchuga"). Their creation took years of work and the costs of huge intellectual and material resources.

- The Tver Academy is a base university for a unified air defense system. This is a world school. It trained specialists for friendly countries, including the CIS countries. If we stop preparing them now, they will go to NATO academies and will relate to our country quite differently, ”said colonel general, former chief of the Air Force General Staff Boris Cheltsov to AN.

Mikhail Zakharov, the teacher of the tactical and armament department of the ZRV Military Academy of the East Kazakhstan region, sadly said in a conversation with the Academy: “The mood in the academy is now the most decadent after the directive of Priezzhevoy”.

- Who benefits from our destruction, such anti-state policy? USA only. And this is not a mistake, it is a state crime, - said Lieutenant Colonel Zakharov.