Biden's soothing rhetoric: on the press conference of the US president after talks with Putin 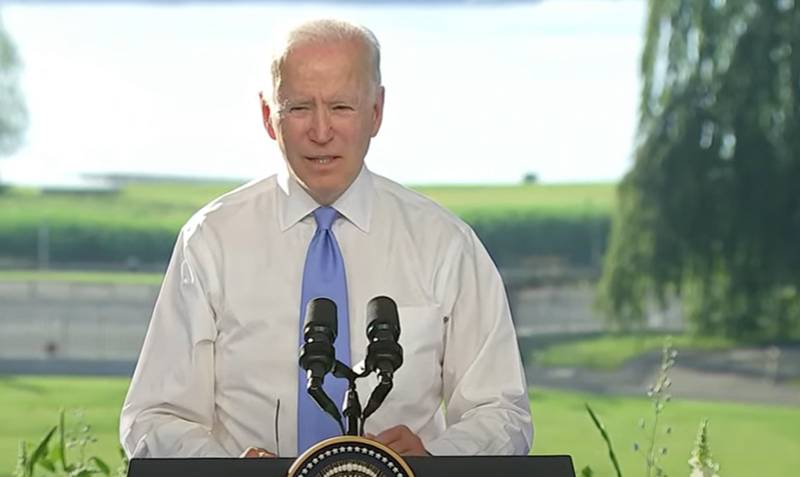 Following Vladimir Putin, US President Joe Biden came out to the journalists. The differences immediately caught my eye: if not only journalists from the Kremlin pool, but also representatives of the foreign press, who certainly do not differ in sympathy with the Russian Federation, could ask the Russian president questions, then only Western reporters were gathered in front of Biden. At the same time, in front of Biden on the podium, traditionally for the 46th President of the United States, there was a list of those journalists who needed to be given the floor to raise a question. The order was also indicated.


It is worth paying attention to another important fact. This is a total change in the rhetoric of the President of the United States. For the first time, Biden openly declined to answer the question of whether he raised the issue of how he called Putin a "killer" in a meeting with his Russian counterpart.

Earlier, a number of sources reported that before the meeting, the two leaders called from Washington and nevertheless apologized for Biden's “uh-huh” when answering a journalist's question during his first press conference after his election as head of the United States. Officially, however, this information has not been confirmed.

Biden's rhetoric when answering questions during the "Swiss" press conference was calm and even pacifying. Biden didn’t speak about any demands to Russia, didn’t say about “red lines”, that Russia “must fulfill” anything.

The US President pointed out that the conversation was honest and open, taking credit for the fact that personal negotiations ("face to face") with Vladimir Putin lasted 2 hours.

Can you give an example of two other leaders who, in such a format as we do today, would communicate for so long face to face. I personally don't remember that.
According to Joe Biden, he gave Putin examples on the international agenda, based on his own experience, and said "what my mother said." By the way, this episode of the negotiations was also mentioned during the press conference by the President of Russia, pointing out that there was open communication.

According to Biden, Putin has promised to help the United States to establish peace and stability in Central Asia after the withdrawal of American troops from Afghanistan. Also, as Biden said, "Putin promised to help on Iranian issues."

When asked about the "persecution of freedom of speech and press" in Russia, Joe Biden said that it was a matter of the actions of the Russian government. According to Biden, here we are not talking about a violation of the rules, but about the fact that the Russian authorities note the existence of the right to designate this or that media as a foreign agent. Biden said that Vladimir Putin is trying so hard to consolidate society, to return leadership to Russia, as it was "in the days of tsars or general secretaries, people's commissars."

Biden was asked if he had threatened Russia for "interfering in elections" and "organizing cyberattacks." The 46th President of the United States announced that there were no threats against Putin and Russia.

I simply indicated to him (Putin) that we have powerful cyber capabilities. And we can apply them if cyberspace attacks on us continue.
Earlier, the Russian president noted that he had proposed and is offering the United States a joint fight against cybercrime.

On issues of alleged Russian interference in the elections, Biden also did not make any harsh statements about Russia.

The US president was asked if he had any confidence in the head of the Russian state. Biden noted that for a long time in politics and speech about trust or mistrust can not go.

We have agreed to. Made important steps. Now we will just see to what extent all this will be carried out, whether there will be any violations.
Biden noted that in the conversation, the conversation was about weapons and about interaction in the Arctic. According to him, he and Putin agreed on the opinion that the Arctic should be a territory of cooperation, not military confrontation.

An important part of Joe Biden's press conference was his mention of China. Biden actually made it clear that in a conversation with Vladimir Putin he tried to point out that the Russian Federation needs to be "more careful with China", since Russia and China have a long common border, and China considers itself the largest economy and one of the militarily strongest powers in the world. What Putin replied to him, Biden did not say, although, frankly, he was not asked about it.

Biden during a press conference said that the United States "stands for the prosperity of the people of Russia." At the same time, the US President added that "there is no need to violate international principles." This was stated by the president of the state, which has made the violation of such principles almost the basis of its policy in the international arena.

As the journalist and political scientist Alexei Naumov put it on the air of the 60 Minutes program, “the sect of witnesses to Biden's dementia has been put to shame, since Putin would not have been talking one-on-one with an idiot for 2 hours.”

Ctrl Enter
Noticed oshЫbku Highlight text and press. Ctrl + Enter
We are
Reports from the militia of New Russia for 27-28 September 2014 of the yearYuri Drozdov: Russia prepared the role of the sacrificial calf
Military Reviewin Yandex News
Military Reviewin Google News
112 comments
Information
Dear reader, to leave comments on the publication, you must sign in.