5 September 2012
0
Firearm appearance weapons greatly changed the principles of the use of cavalry in battle. Armed riders have ceased to be an unconditional force, the infantry has acquired effective weapons to fight the once invulnerable enemy. The best defense of the cavalry was the speed, it was also the main tactical advantage. If the cavalry managed to get to the infantry that was not prepared, then the defeat of the latter was deafening, if not, everything happened exactly the opposite. The personal role of the cavalry commanders increased immeasurably. They were supposed to have a great eye estimation, understanding the logic of combat and incredible, sometimes desperate courage. Undoubtedly, Fedor Uvarov shone with all these qualities in battle.

Fedor Petrovich was born in 1769, in a noble, but rather poor noble family. Since childhood, he was enrolled in the service, but he began his active service three years later than was accepted - in 18 years. His father, Peter Uvarov, was in the capital under investigation, and the family was ordered to remain on the estate. Only in the 1788 year, escaping to his father in St. Petersburg and taking advantage of the patronage of General Tutolmin, Fyodor Uvarov was assigned to serve as the captain of the Sofia Infantry Regiment. A little later, he was sent to the province of Orel, where massed troops to be sent to war with Sweden. However, Uvarov did not go to war with the Swedes, having received a transfer to the Smolensk Dragoon Regiment in 1790. All further service Fyodor Petrovich held in cavalry units. 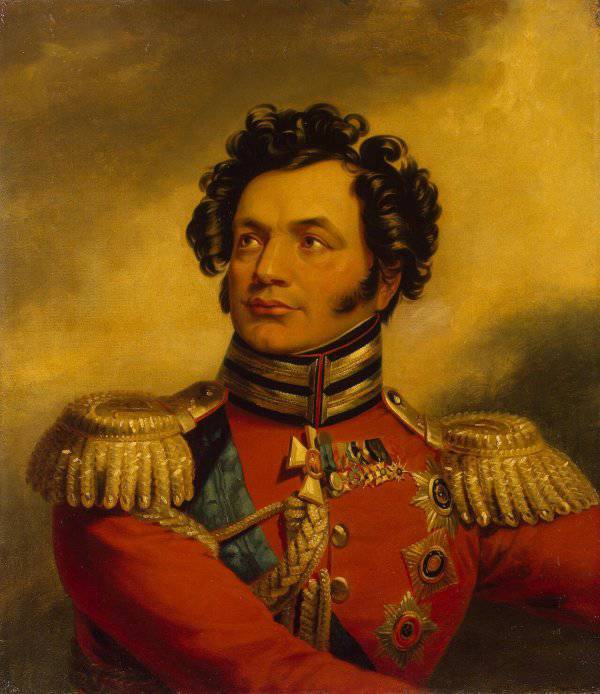 In 1792-1794, Uvarov served under Alexander Suvorov in Poland and performed well in battles with insurgents in Stolbtsy and near Mir. The uprising in Warsaw became an exceptional test of courage and fighting spirit when on the night of Easter the rebels attacked the Russian garrison. Few then managed to leave the city. Uvarov with his squadron was among them. During the 36 hours, fighting off the rebels, he managed to withdraw a squadron from the city and connect with the corps of Baron Igelstrom. For his courage and composure, Uvarov was promoted to Prime Minister, and in the spring of next year he was promoted to lieutenant colonel personally by Suvorov.

After the suppression of the Polish uprising, the service of Fyodor Petrovich was not marked by any informative official documents, but the surviving testimonies of contemporaries tell us something about Uvarov’s combat activities. At the beginning of the year 1797 Fedor Petrovich travel was in the village Radoschog Oryol province. It so happened that Uvarov was there during the peasant uprising and assumed command of the squadron of the Akhtyrsky Hussars. The speech was successfully suppressed, and the regimental chief, Major General F. I. Lindener, in a report to the sovereign highly commented on the actions of Uvarov. In the same year, Fyodor Petrovich was transferred to the Catherine's Cuirassier Regiment, and the following year he was promoted to colonel.

In the 1798 year Fedor Petrovich moved to Moscow, where he began his meteoric career took off. In the first capital, a prominent cavalry officer liked the wife of Senator P. V. Lopukhin, the Most Serene Princess Ekaterina Nikolayevna. She, according to the characteristics of contemporaries, differed extremely windy character and sometimes spent fabulous sums on lovers. Using the position of her husband, Lopukhina patronized Uvarova in every possible way, and one day it almost ended in tragedy. Ekaterina Nikolaevna tried to secure the order of St.. Anna 1 degree through stepdaughter, who at that moment was the favorite of Emperor Paul I. However, the monarch treated this award with particular scrupulousness and selected the candidates extremely meticulously.

Uvarov, according to Paul, did not deserve the award. Not getting the desired, Lopuchin had a fight with her stepdaughter and tried to embroil her with the emperor. And after defiantly poisoned - he took arsenic and loudly began to call for help ... In the end, the Order of St. Anna Uvarov still received.

In 1798, following the relocation of the Lopukhins, his transfer to St. Petersburg first followed to the Cuirassier Regiment and then to the Horse Guards. In the autumn of the year 1799 Uvarov was promoted to major general and became adjutant-general. By the end of the summer, 1799, Fyodor Petrovich already commanded the Cavalry Guard Corps, which was later transformed into a three-squadron military regiment, and Uvarov remained as regimental chief. The emperor at the reviews repeatedly expressed his favor to the regiment, and only once displeasure about his training. Uvarov throughout the board was a confidant of the emperor.

And although he conspired against Paul, he did not take an active part in the murder, which, by the way, was not planned. On that fateful evening, Uvarov personally guarded the heir with other officers and, unlike many other conspirators, remained under Emperor Alexander I.

Soon Uvarov justified the confidence of the young emperor, the court intrigues and love affairs did not dull the fighting qualities of the officer. In 1805, under Austerlitz, Fyodor Petrovich commanded the cavalry of the right wing, led by Bagration. When the matter took a bad turn, Marshal Joachim Murat struck with the forces of an entire cavalry division, and this is the 8 regiment of selected riders, in the context of the right flank and center of the Russian troops. Uvarov managed three regiments to prevent a catastrophe that threatened the columns of Bagration. Having lost all the cavalry, Fyodor Petrovich saved many hundreds of Russian soldiers. The Russian monarch highly appreciated the actions of Uvarov, awarding him the Order of St. George 3 degree and Order of St.. Alexander Nevsky.

In the 1807 campaign of the year Fyodor Petrovich entered into submission to Bennigsen and distinguished himself in several battles. On May 26, under the village of Wolfsdorf, he successfully attacked the enemy, not allowing the French to consolidate, then under Geilsberg Uvarov did not allow the Russian troops to bypass, and under Friedland, Fyodor Petrovich's cavalry covered the right flank, and then fought in the rearguard, covering the departure of Evgeny Württemberg detachments.

Later, Fyodor Uvarov was inseparable in the retinue of the emperor, being present at the signing of the peace in Tilsit and at the meeting of Alexander with Napoleon in Erfurt. And in 1809, he accompanied the monarch on his travels.

But for a long time at the court Uvarov did not linger. Already in 1810, he went to the southern theater of operations, where he fought against the Turks. Here he participated in the battles for Silistra, in the unsuccessful siege of Shumla and the unsuccessful assault on Rushchuk, where he received a concussion in the shoulder, commanding one of the columns. Later Fyodor Petrovich showed himself in the capture of Nikopol and in the battle of Batting, for which he was awarded the Order of St. George 2 degree.

1812 year Fedor Petrovich met the commander of 1-Cavalry Corps. During the retreat of the Russian army, the corps distinguished itself in the battles of Vilkomir, Ostrovno and Smolensk, as well as in numerous rearguard battles.

In the battle of Borodino, Uvarov’s corps (6 regiments and a horse-artillery company) together with the Cossacks under the command of Platov made a raid through the right flank to the rear of the French. By the time Kutuzov ordered the raid, a difficult situation had developed on the left flank: Russian troops were exhausted by the endless attacks of French infantry and cavalry, and Bonaparte was already preparing the final oblique blow, which was supposed to roll up like a carpet of defense of the Russian army. Young Guard was preparing to speak, but Napoleon stopped the confusion on his right flank, caused by the appearance of Platov Cossacks and Uvarov's regular cavalry. This attack is credited with a two-hour delay in the actions of the French for the Russian army, which made it possible to reorganize the frustrated regiments and strengthen the exhausted left flank. 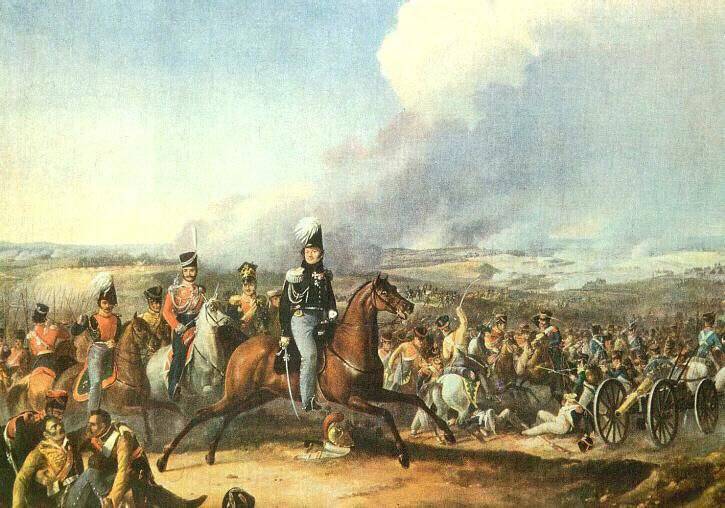 Despite this, Kutuzov was dissatisfied with the actions of cavalrymen, and they are almost the only generals of Borodino left without awards. Later on Fedor Petrovich took an active part in the battles during the retreat to Moscow. Thus, in the village of Krymsky, his troops broke and forced the French cavalry to retreat. Later he participated in the battle of Tarutino, when Murat's advance guard was crushed, then in the battle of Vyazma and during the pursuit of the enemy near the village of Krasnoe.

The foreign campaign of the Russian army for Uvarov was marked by many battles: near Bautzen, the already familiar rearguard battles, then fierce battles at Dresden and Kulm. Fyodor Petrovich distinguished himself in the Battle of Leipzig, for which he was elevated to the rank of general, from cavalry.

With the completion of Napoleon's warrior, Uvarov became one of the sovereign’s most trusted representatives and was constantly with him, fulfilling his duties as adjutant general. In the 1821 year Uvarov was appointed commander of the Guards Corps, and a year later became a member of the State Council.

In 1824, Fyodor Petrovich fell ill, but continued to do business. 20 November, he in the presence of the emperor and the grand dukes died. Uvarov will always remain in stories excellent cavalry commander.