The old RRF is not needed in the hut 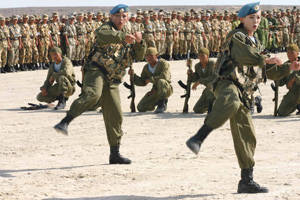 The tactical doctrine of the Collective Security Treaty Organization (CSTO), entitled “Interaction-2010”, will take place from 25 to October 28 at the military training ground “Chebarkul” near Chelyabinsk. As officials of the Russian Defense Ministry announced, this exercise "will be used to train combat operations by military contingents of the CSTO Collective Rapid Reaction Forces on localizing armed conflict in a collective security region and ... destroying illegal armed formations."

Already in the pre-teaching information, two main problems of the CSTO for today were immediately identified. The first of these is the lack of order and a plan of action for the CORF in the event of an internal conflict in one of the countries of the Organization, similar to the one that occurred last summer in Kyrgyzstan. The second is an extremely limited participation in the CSTO events of the Belarusian military. However, as it has now become clear finally, the two problems are closely interrelated.

HAZARDS OF THE GENERAL

When in the Osh and Jalal-Abad regions of Kyrgyzstan this summer mass inter-ethnic clashes, murders and pogroms began, the new leadership of the Central Asian republic that came to power was seriously afraid that they would not be able to stop the unrest on their own. It appealed to the heads of the CSTO member states with a request to send peacekeepers from this organization to the country. But Bishkek did not wait for such help. Only some of the material and technical supplies to equip law enforcement agencies of the republic - that's all. Today we know why this happened. Belarus seems to be vigorously in favor of involving the CSTO military contingent in the conflict in order to that... to return to Kyrgyzstan its escaped President Kurmanbek Bakiyev, who, by the way, took refuge in Minsk. At the same time, the desire to include the Belarusian unit in the composition of such a contingent did not demonstrate anything. Rather, on the contrary, Minsk would like to do everything with “alien” hands. And since decisions in the Collective Security Treaty Organization are made by consensus, Bishkek eventually had to get out of the crisis situation without the direct support of other members of the CORF, who were expected to be brought to order in the republic.

At the same time, the October 10 October elections in the Kyrgyz parliament showed quite calmly that the country was able to emerge from the phase of acute mass clashes. And without the involvement of military contingents of the CSTO. Although many observers, experts note that the situation in Kyrgyz society is still far from stabilizing. And it’s not a fact that the new aggravation of the situation in the republic is no longer possible, and the new authorities will not require more input to the RRF as peacekeepers. It is not by chance that at the informal summit of the heads of the CSTO states held in Yerevan on 20 – 21 on August, they decided to amend the charter of this organization so that if such cases were repeated, it was possible to actively help the allies. As far as we know, the corresponding amendments have already been developed - it remains to consider them and, as promised, to adopt them in December at the next summit.

By the way, the CSTO Secretary General Nikolai Bordyuzha in mid-September at a meeting of one round table told in detail why there were “troubles” with the sending of the RRF units to Kyrgyzstan, and gave his forecast for further developments in this country. So, in his opinion, there is inevitably an exacerbation of the socio-economic situation in the winter of this year. The reasons are as follows: the sowing campaign in the republic was carried out by half, if not by 30%, a huge number of people were left without shelter, and in general “the economy is practically at the lowest level due to the fact that it is being smashed for the third time in the last five to seven years old". All this, Bordyuzha believes, “will certainly affect the lives of people, provide food, warmth and entail an exacerbation of the situation.” At the same time, he noted that the leadership of Kyrgyzstan assesses the situation in the republic absolutely objectively, understanding what could happen.

“That is why the most difficult thing we are working on in the regulatory framework is to differentiate activities so that we do not engage in police functions on domestic issues,” said Nikolai Bordyuzha, noting that he was most concerned about giving the organization gendarme functions. “We do not want the CSTO to be used to protect certain political forces or to solve some internal political problems in this or that state ... We are very careful about the creation of a crisis response system.”

CHOOSING TO DO EVERYTHING

Nevertheless, the CSTO Secretary General acknowledged that even in the summer (that is, before the idea of ​​drafting amendments to statutes), the collective rapid reaction forces had an appropriate mandate to use them to restore order in Kyrgyzstan. “It’s another thing that the contingent was not really deployed,” said Bordyuzha. “It was considered inexpedient to introduce the CSTO power component there, since this would possibly provoke the growth of the conflict and exacerbate it.”

It was then that the measures of direct military assistance from Kyrgyzstan from other members of the CSTO and decided to replace the supply of "special means and special equipment of non-lethal action, so as not to fall into the hands of outraged groups weaponthat could be used against civilians. " But, by the way, in the framework of the “Interaction-2010”, among other tasks, the use of just non-lethal weapons, which is necessary mainly for fighting in the city, will be worked out. This was announced recently by the head of the exercise from the Armed Forces of the Russian Federation, the deputy commander of the Airborne Forces, Major General Alexander Lentsov. In addition, the First Deputy Chief of the Joint Staff of the CSTO, Colonel-General Anatoly Nogovitsyn explained that "the KFOR units should be provided with non-lethal weapons to perform special tasks." Therefore, the Collective Rapid Reaction Forces are still assigned “undesirable” gendarme functions and their use of purely police means.

But, as can be seen from the composition of the troops recruited for training, the position of Belarus, its attitude to participation in CSTO events does not change at all, with no adjustments. Only a few officers from the Ministry of Defense of the Republic of Belarus will attend the upcoming maneuvers, either as observers, or as ordinary staff officers.

It has long been noted that Minsk never sends its military units to the CSTO exercises that go outside the republic. They were not in the annual Fronteer maneuvers - from 2004 to 2008 a year, or at last year's Interaction-2009. Because they all took place on the territory of Kazakhstan, Tajikistan or Armenia.

This is explained by the fact that Alexander Lukashenko, when he first assumed the office of President of the Republic of Belarus, vowed to the people of his country that Belarusian soldiers would never take part in hostilities outside the national territory. As it was spelled out in the republican legislation. However, the CSTO Charter and the agreement on the CRRF, also, by the way, signed by Belarus after long hesitations and agonizing doubts, predetermine "the protection on a collective basis of the independence, territorial integrity and sovereignty of the member states." And each country - a member of the CSTO must, of course, come out in defense of its ally. But it turns out that Russia, Kazakhstan and the same Kyrgyzstan should, in case of anything, defend Belarus, and she is not obliged to defend anyone. Is that made a kind of small concession. They say that, in relation to the Republic of Belarus, its military personnel included in the CORF may be involved only in the zone of responsibility of the regional grouping of the forces of Belarus and Russia located in the adjacent territories of the two countries. But even here, consistency may soon be completely lost.

Not so long история The CSTO shows that Alexander Lukashenko has repeatedly used this organization as a powerful lever of pressure on Russia. And in the situation before the upcoming presidential elections in the Republic of Belarus, he will try to take advantage of it. Russian media have reported that the Kremlin may not recognize the results of the election of the head of the Belarusian state 19 December, if numerous facts of fraud in favor of Lukashenko of the citizens of the republic are revealed. Minsk responded instantly. Lukashenko himself said that with such a development of events, Belarus will withdraw from all integration structures and projects in the post-Soviet space. The general meaning of the statement was to ensure that if Batkina did not win the victory, he still would not leave the presidency, but would become an illegitimate leader for those who want Belarus to participate in the Union State, the CIS, the Customs Union and, of course, the CSTO.

In general, Belarus can hardly count on any active participation in the activities of the Collective Security Treaty Organization with any amendments to the statutes. But the procedure for attracting the CRRF to the localization of armed conflicts on the territory of one or another CSTO member state should be revised so that no one, and Minsk in particular, can no longer single-handedly slow down decisions and actions that suit the other parties to the treaty.