Diesel assorted: how the Soviet army chose a tank engine 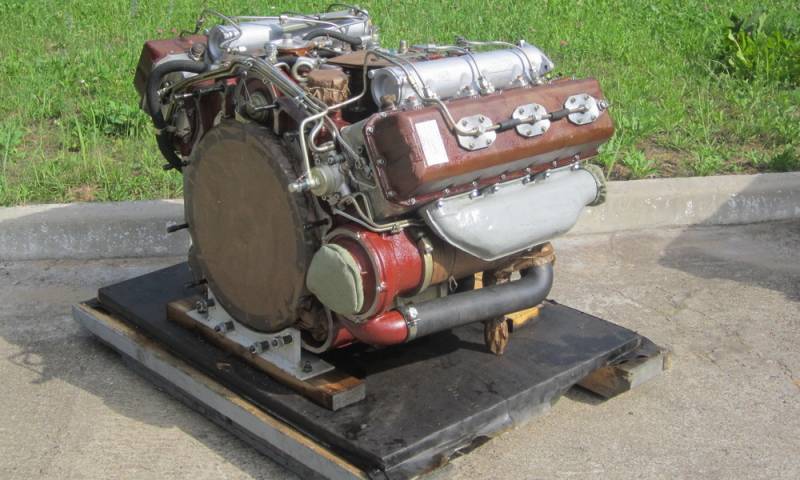 To replace B-2 and not only

Honored B-2 by the end of the war became the main tank engine. With minor changes, the diesel engine was installed both on medium tanks and in the forced version on heavy vehicles. In total, during the war years, at different times, six modifications of the tank engine were produced at once. For tanks of the KV series, the V-2K developed in the pre-war years was assembled, featuring an increased power of 600 liters. from. It was possible to accelerate the engine to such power by increasing the crankshaft speed, which inevitably affected the engine resource. In the first war winter of 1941, this became a real problem. In frosts, the forced V-2K with a motor resource of only 250-300 hours at night had to be started every 1,5-2 hours. Otherwise, it was impossible to maintain the combat readiness of tank units. Later, in the design bureaus, special stoves were developed, which made it possible to partially save the resource of expensive equipment. 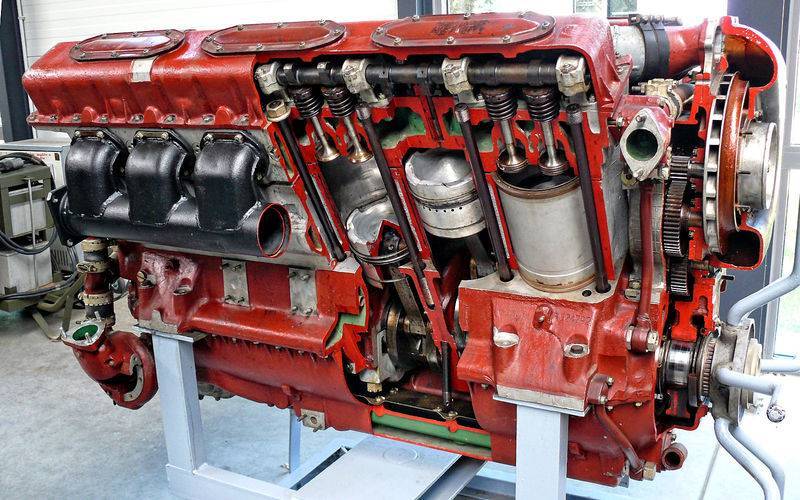 Motors based on the pre-war B-2 are still in service. Source: 4.bp.blogspot.com
For tanks of the IS series and self-propelled units ISU, since 1943, moderately forced 520-horsepower V-2IS and V-11IS-3 engines have been used. The service life of the new diesel engines reached 500 hours. These were the fruits of the work of the famous SKB-75 of the Chelyabinsk Kirov plant under the leadership of Ivan Yakovlevich Trashutin. On an experimental basis, the V-6U engine was created for the IS-12 tank, from which it was possible to collect 700 liters at once. from. This power surge is due to the crankshaft-driven turbocharger. In 1944, the B-2 design evolved into the 800-horsepower B-14 turbodiesel. However, the motor was not accepted for service.

During the war years, one of the centers of engine building was the Barnaul plant No. 77, which produced its first diesel engines in November 1942. In total, almost 8 thousand tank power plants were assembled in Barnaul during the war. But the plant workers not only assembled diesel engines, they also proposed modernization programs. So, in 1944, they assembled a whole line of V-16, V-16F and V-16NF engines with a capacity of 600, 700 and 800 hp, respectively. from. And again outside the series.

The overwhelming majority of the tanks of the T-34 series were equipped with V-2-34 diesel engines. Why in the overwhelming majority, and not 100% of the cases? The statistics were slightly changed by the plant in Krasny Sormovo, which at the beginning of the war had to release several hundred T-34 tanks with gasoline engines from the gates. The reason is trivial - the lack of diesel engines from subcontractors.

In total, in the first post-war years, a whole branch of production of the V-2 engine was formed in the country at four plants - Chelyabinsk Kirov, Stalingrad Tractor, Barnaul Transport Engineering and Ural Turbomotor. The latter was formed by the merger of the Sverdlovsk plant No. 76 and the Turbine plant. At the same time, the development of diesel engines was carried out in specialized design bureaus in Sverdlovsk, Chelyabinsk (head design bureau), Barnaul and Leningrad. In general, the further fate of the B-2 was taken care of by almost the whole country. But no one was going to get hung up on the well-deserved motor. Everyone knew about the serious potential for modernizing the diesel engine - some experiments with turbocharging could add up to 50% of the power. However, the leadership of the defense industry demanded new designs from the engineers.

Diesel paired with a tank

One of the paradoxes of the post-war tank engine building was the development of a power plant directly under the tank. There was no question of any unification. This is rather strange, since during the war years, the approach with a single V-2 engine proved to be excellent. This made it possible to quickly deploy mass production of diesel engines in a relatively short time. In the 50s and 60s, the concept changed, and the engine was actually tailored for the MTO of the next "Object X". At the same time, they did not agree on any interchangeability with "Objects" from other design bureaus.

The second paradox was the huge variety of projected power plants. If we go beyond the main topic of the article, then we can point to four trunk and competing engine lines at once. The first is a program for further modernization of the B-2. Looking ahead, we will mention that it turned out to be the most successful. The Russian army still uses the B-2 series engines in its most modern tanks. As usual, Chelyabinsk became the lead developer of this line, but Leningrad and Barnaul "helped" him in this. The second engine-building program is associated with the development of four-stroke diesel engines with large camber. We worked on a series of engines called UTD (universal tank engine) in Barnaul. The engineers had to adapt to the strict height restrictions of the armored vehicle and, within reason, reduce the profile of the power plants. As a result, the UTD engine got a camber of 120 degrees. One of such engines UTD-20 with six cylinders and 300 hp. from. even ended up in the engine-transmission department of a serial car. True, it was not a tank, but an BMP-1. Derated up to 240 liters. from. the variant under the long index 5D-20-240 has been installed in the BMD-1964 since 1. But not all developments of motor builders were so lucky. For example, let's take a diesel engine DTN-10, which was built exclusively for the heavy tank "Object 770". The diesel was 4-stroke and ten cylinders. This was the end of its tradition. The fact is that the developers from the design bureau of the Chelyabinsk Tractor Plant chose an exotic U-shaped scheme for the motor. Fundamentally, there is nothing complicated in this - the design is two in-line motors stuck together with each other. The two crankshafts were connected either by a chain or by gears. Such a non-trivial scheme was chosen for one reason - the pursuit of the minimum engine displacement. At the time of the development of the second generation tank, its dimensions were considered the most important property of the engine. Often this went beyond common sense, and reliability and resource were sacrificed for compactness. The DTN-10 from Chelyabinsk turned out to be not the smallest one and occupied 1,89 cubic meters in the tank at once. 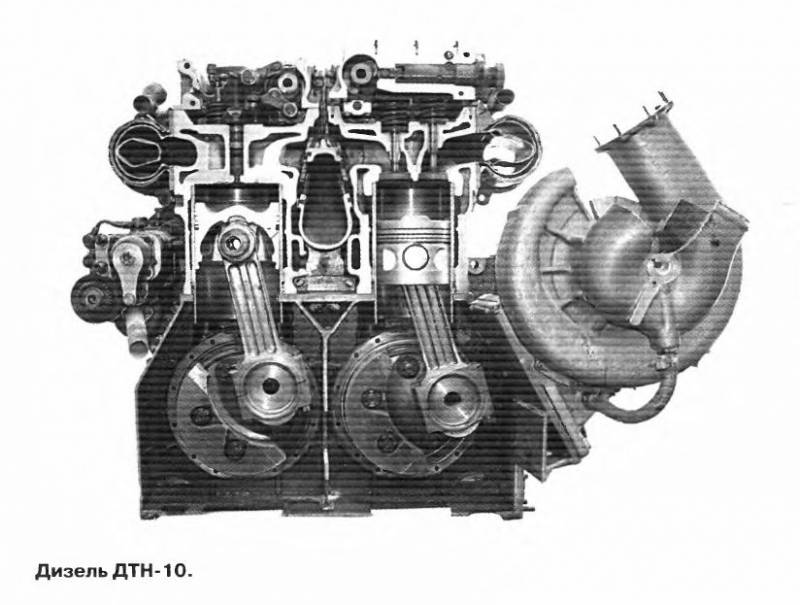 Source: Solyankin A.G. and others. Domestic armored vehicles. XX century. Volume 3
Power reached an impressive 1000 hp. from. with a liter capacity of 31 liters. s. / l. Is it a lot or a little? For example, the traditional 12-cylinder V-shaped engine V12-6B for the T-10M tank had a liter capacity of only 19,3 liters. s. / l. However, the upstart 75TD, which is being developed in parallel at the Kharkov design bureau of plant No. 5 (it was in previous materials) set a record of 42,8 liters. s. / l. By the way, the engine in the tank occupied only 0,81 cubic meters of space. And this is even before the moment of forcing to 700 liters. with., when the engine was added speed at the request of the chief designer of the T-64 Alexander Morozov. In total, three DTN-10 engines were created in Chelyabinsk, one of which was even installed in an experimental heavy tank "Object 770". Among the novelties of the unit was not only the U-shaped scheme, which was almost never used anywhere else, but also the combined turbocharging used for the first time in the USSR. Additional air into the combustion chambers was supplied not only by the supercharger from the crankshaft, but also by the axial turbine, which receives energy from the exhaust gases. The two crankshafts were connected to each other by a gearbox with a clutch. There are no final results regarding the reliability of such a unit, since the work on the engine was closed following the closure of the "Object 770" topic. And this is far from the only example when many years of work on the engine was stopped due to the unfitness of an experienced tank. 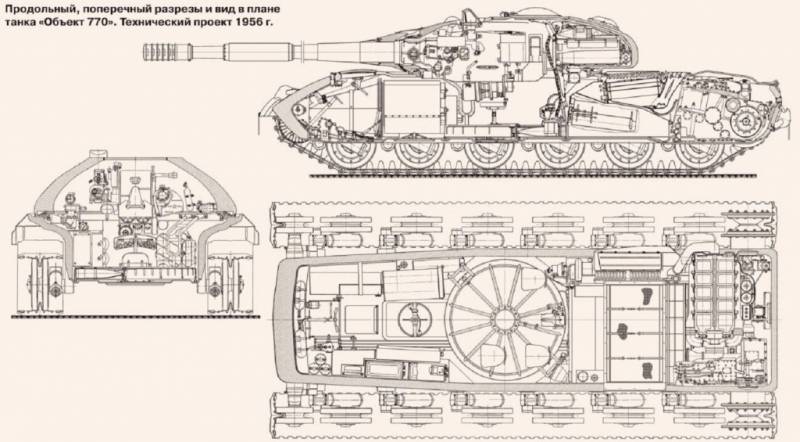 "Object 770". Source: voentex.ru
Let's go back to the main directions of the domestic tank engine building in the post-war decades. The third program was the development of two-stroke diesel engines, the most famous of which, of course, is 5TDF and units based on it. However, it should be said that it was far from the only tank "two-stroke" in the domestic stories... Back in 1945, in Kharkov, a team of engineers led by engineer A. Kuritsa proposed a project for a 1000-horsepower diesel engine DD-1. Despite the two-stroke cycle, it was a fairly traditional 12-cylinder engine with a V-block configuration. The idea in the Kharkov design bureau of plant No. 74 was promoted until 1952, when the revised diesel DD-2 produced 800 hp at the stand. from. and worked for 700 hours. But the project was closed due to the development of a new generation tank "Object 430", which we now know as the T-64. The 5TDF diesel engine installed on it has an ambiguous reputation, heavily involved in politics. Domestic tank builders traditionally scold the Ukrainian engine and also traditionally praise V-2 diesel engines. Only now they forget that the design will soon hit 100 years old and it is already somehow inappropriate to talk about moral obsolescence. In Ukraine, especially in Kharkov, motors of the 5TDF and 6TD series are praised, pointing out the shortcomings of the Ural four-stroke diesel engines. One thing is certain: if it were not for the collapse of the Soviet Union, the innovative Kharkov diesel engines would still have been brought to the required condition. It is not for nothing that the whole country worked on finalizing the design in the early 50s.

And, finally, the fourth branch of the development of the domestic motor industry is tank gas turbine engines. They were born under the impression of American plans to build gas turbine tanks and immediately occupied considerable resources of the state. The development was carried out in Leningrad, Chelyabinsk and Omsk at the same time. And if the 5TDF engine caused criticism due to its low reliability, then the installation of gas turbine engines in the tank was disputed as a fact for a long time. Quite recently, publications of the late 80s were declassified, which clearly indicate that there was no consensus among domestic engineers regarding the advisability of a gas turbine engine in a tank. But that's a completely different story.

Ctrl Enter
Noticed oshЫbku Highlight text and press. Ctrl + Enter
We are
Iron fist of the Red Army. Motorized and tank divisionsHeavy tanks of the USSR in the postwar period
Military Reviewin Yandex News
Military Reviewin Google News
66 comments
Information
Dear reader, to leave comments on the publication, you must sign in.