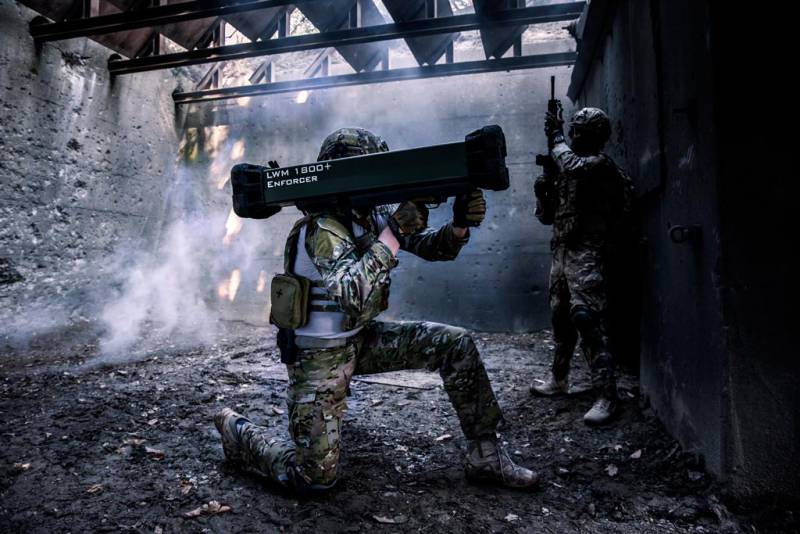 The German branch of the international enterprise MBDA Missile Systems continues work on the advanced Enforcer portable missile system. To date, the design has been completed and part of the tests has been carried out. Not so long ago, the next stage of inspections began, which brings the moment of adopting the complex into service. According to existing plans, the MBDA Enforcer will enter the combat units of the Bundeswehr in 2024.

To strengthen the infantry

During the fighting in Afghanistan, the German army faced a characteristic problem. Regularly, it was necessary to destroy enemy buildings or equipment at distances of 1,5-2 km, however, the infantry and special forces did not have grenade launchers or missile systems capable of solving such tasks.

In the mid-tenths, this problem was solved by adopting a foreign-developed Wirkmittel 90 grenade launcher. This disposable product is capable of hitting targets of different types at distances up to 1200 m. Then the Bundeswehr launched the Leichtes Wirkmittel 1800+ (LWM 1800+) program, the goal of which was to create its own complex with a guided missile flying at 1,8-2 km. 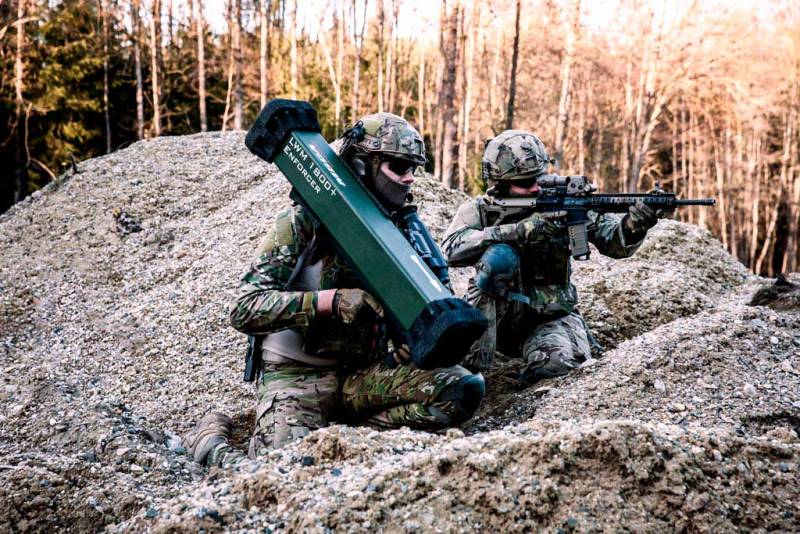 At the end of 2019, the customer compared several projects submitted for the competition and chose the winner. It was a product with the Enforcer code from MBDA. In December, a contract was signed for the continuation of development work and the subsequent launch of serial production. The first batch of new weapons will go to the customer in 2024. The existing contract stipulates the supply of 850 complexes, and in the future, new orders may appear.

Last year, the development company completed the bulk of the design and began testing. Individual components of the complex were tested on stands, after which preparations began for full-fledged field tests. To date, several pilot launches have been completed, which, on the whole, have been successful.

Recent ones news the tests were received at the end of May. The Bundeswehr published a press release and a video from the training ground. The video showed the processes of preparing for a test shot and the actual launch. We also clarified information about the technical features and principles of the complex operation. The previously announced plans to introduce the Enforcer product into service in 2024 remain in place. 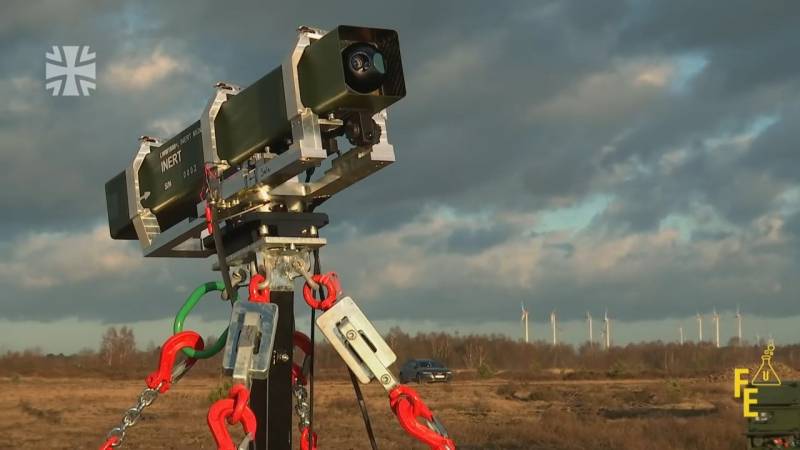 Enforcer on a test installation

The MBDA Enforcer is a lightweight multipurpose missile system designed for use by infantry and special forces. Externally and ergonomically, the complex is similar to various modern rocket launchers. It has a length of 1 m and weighs about 10-12 kg, which makes it easy to carry as part of a fighter's equipment and does not impose serious restrictions on its use.

The LWM 1800+ launcher is based on a 110x110 mm square transport and launch container. A sighting unit and a fire control device with two handles are installed on it. After launching, the control electronics are easily rearranged to another TPK, and the operator can attack a new target.

The complex uses a guided missile weighing less than 7 kg. This product is built according to the normal aerodynamic design; folding X-shaped wings and rudders are placed on the cylindrical body. During the development of a light but effective rocket, it was necessary to search for and master new technologies. For example, laser welding of body parts is used, and the components are connected after loading the engine charge. 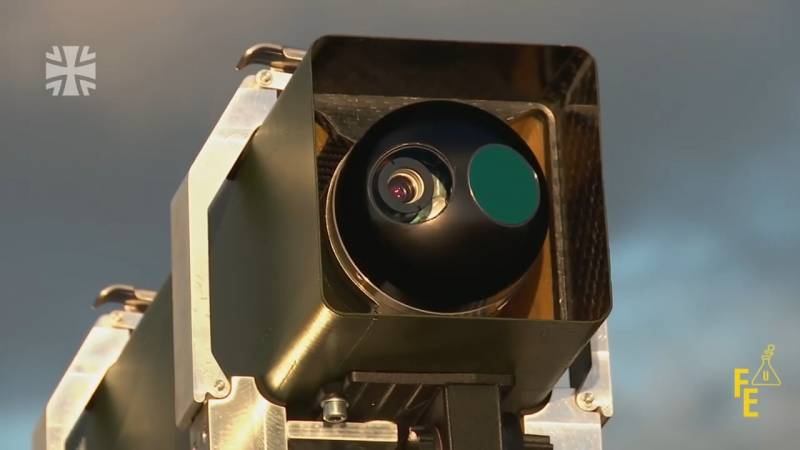 Rocket fairing with seeker inside TPK
The rocket for the Enforcer is equipped with a combined optoelectronic homing head with daytime and thermal imaging channels, operating on the "fire-and-forget" principle. GOS provides destruction of stationary and moving targets. Modes of application with target acquisition before and after launch are provided.

The target is destroyed by a compact and light warhead with several damaging effects. The possibility of destroying manpower, unprotected and lightly armored equipment has been declared. Low charging power reduces potential collateral damage.

The LWM 1800+ rocket is equipped with a solid-propellant starting and sustaining engine. The starter motor allows starting in a confined space without the risk of injury to the operator and others. The cruise provides a flight of 2 km, which exceeds the customer's requirements.

The goal of the Leichtes Wirkmittel 1800+ program is to create a new missile system for infantry or other units. With its help, it was planned to increase the firepower and effective range of fire. This task was solved within the framework of the first stage of the project, and the portable version of the missile system was successfully brought to testing. However, test launches are so far carried out not from the operator's shoulder, but from a stationary installation. 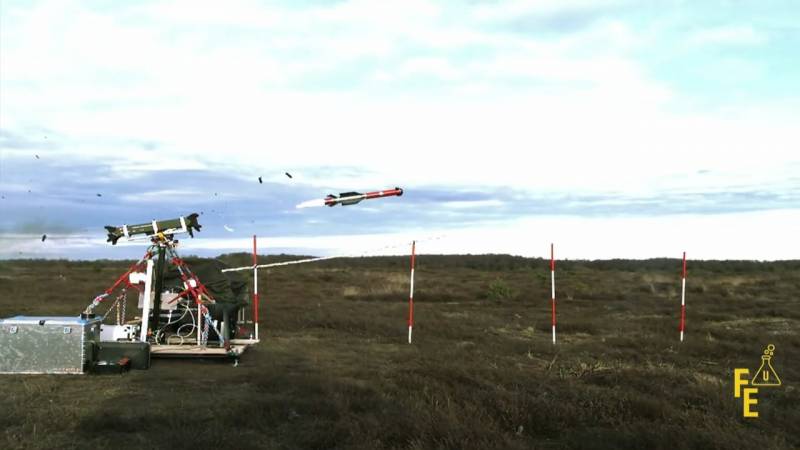 Start. Starting engine burned out, planes exposed
MBDA is already offering a second version of the suite called Enforcer Air. It is intended for use on light helicopters and unmanned aerial vehicles. Such a complex includes a special pylon with mounts for two TPK, as well as separate blocks of sighting equipment and control devices.

The total mass of the Enforcer Air with two ammunition does not exceed 30 kg, which reduces the requirements for potential carriers. The blocks of the complex can be placed in the most convenient way without serious restrictions. Depending on the launch altitude, the missile's flight range may remain the same or increase to 8 km.

The basic portable version of the Enforcer complex has been successfully tested and is showing its best side so far. The Bundeswehr remains optimistic and plans to receive a large number of serial products on time. It is to be expected that such plans will be implemented. MBDA still has plenty of time to complete all the necessary work, from simple tweaking to fixing newly identified deficiencies. 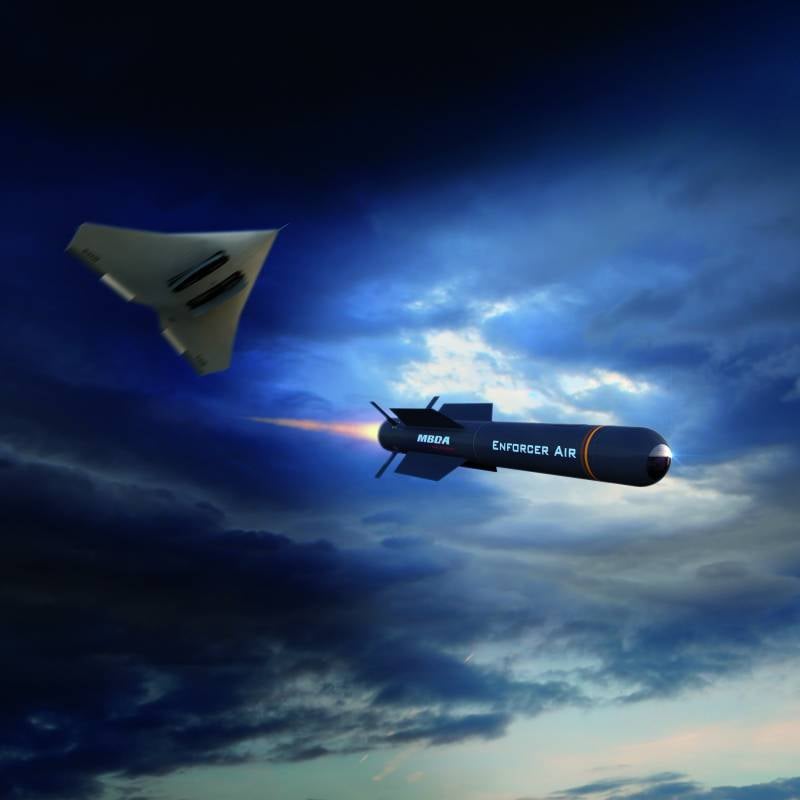 Using the Enforcer Air as seen by the artist
Prospects aviation modifications are still unclear. The Enforcer Air is available as blueprints and promotional materials only. It is not known how soon the prototype will appear and be released for testing. Apparently, the development of the aviation complex will move to a new stage after the completion of work on weapons for the infantry. If the basic Enforcer performs well, then the aviation Enforcer Air will be able to find its customer.

The LWM 1800+ project is of obvious interest to the Bundeswehr, as well as to foreign armies. The new type of missile system should fill the gap between disposable grenade launchers and full-size anti-tank systems. The Enforcer compares favorably with the range and firing accuracy, and the advantages over the ATGM are due to its smaller dimensions and weight. The need for such a weapon has already been confirmed by practice - and it is for this reason that its development began.

Thus, in the foreseeable future, the German armed forces will receive almost a fundamentally new weapon with special capabilities, which can positively affect the overall potential of rifle units. In the future, it is possible to adopt into service and aviation modifications of the complex. However, all this will happen no earlier than 2024, but for now MBDA and the Bundeswehr have to carry out the entire range of necessary work.