Crime against humanity: Danya Milokhin - a new "beacon" for youth 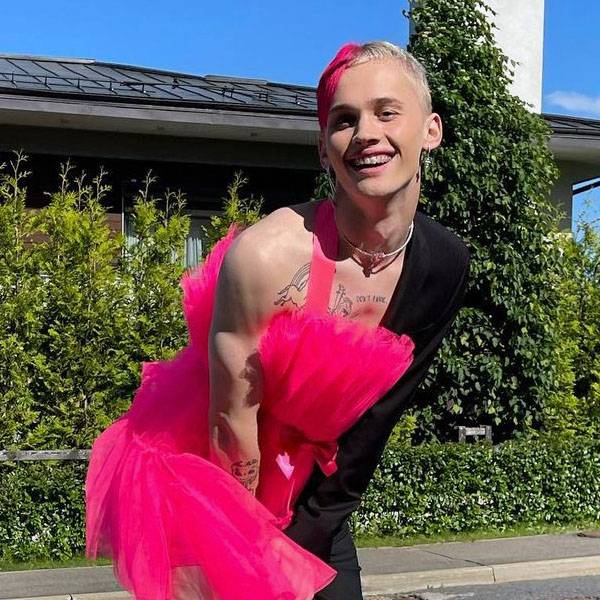 Everything is clear with him

Scandal follows scandal. At first, Milokhin pleased everyone with his presence at the St. Petersburg International Economic Forum, which took place from 2 to 5 June. Grimaced, shocked in every possible way, and at the end he laid the audience present on the floor for a new video in TikTok. Conducted, so to speak, a master class for the public. In fairness, it is worth mentioning Ksenia Sobchak in the composition of those laid on the floor. This fact very eloquently characterizes the level of the speakers of the congress. Next news the occasion was the appearance of Milokhin at a real sabbath of our time - the MuzTV award ceremony. The TikTok star is wearing an outfit that does not allow for unambiguous determination of the gender of an individual. Milokhin's pink and black dress at least refers to the propaganda of sodomy and hints at the blogger's serious childhood trauma. 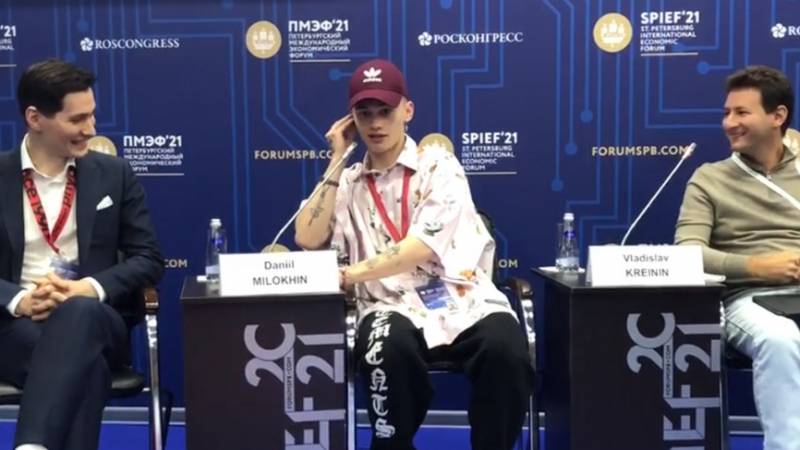 Milokhin at the St. Petersburg International Economic Forum. By the way, the opportunity to become a speaker at SPIEF-2021 cost 960 thousand rubles. Prt Scr youtube.com / Bulletin of the Neva
Childhood for Danila Vyacheslavovich Milokhin really did not work out. Mom passed the future star to an orphanage, where he had a hard time. As Milokhin himself assures, the pupils literally had to fight for food.

Ironically, Yuri Shatunov's adoptive mother was the director of the orphanage. Now it is perceived by many as something sacred - they say, Milokhin acts as a kind of reincarnation of Shatunov on the stage. Together with his brother Ilya, thirteen-year-old Danila was adopted, but nothing sensible came of it. In the future, the fate of the brothers was drugs, poverty and again a painful struggle for a piece of bread. This, again, is from the words of the blogger himself.

Milokhin resolutely refused to study and in 2019 tried himself as a blogger on the TikTok platform. By the beginning of 2021, Milokhin was already in the top ten highest paid ticktokers in Russia. The star's permanent habitat is Dream Team House. In a nutshell and without obscene assessments, then this is a creative association of the XXI century with elements of the heritage of "Dom-2". IN stories Milokhina had a drug addiction, which, apparently, has not yet been eliminated. But his brother Ilya could not get off the needle. In April of this year, he was sent to an elite rehabilitation center, from which he escaped safely. According to relatives, for 20-year-old Ilya, who also went to bloggers, two weeks of abstinence from drugs is already a great achievement. The much more popular Danya has not yet ended up in rehabilitation centers for drug addicts, but the “chemical” status of the blogger is still not fully understood.

The future is already here

Ksenia Sobchak, who lay down at the economic forum in St. Petersburg for the TikTok fun of Milokhin, commented on the ongoing performance with biting:

"The future is already here!"
Danya Milokhin and his type - is this our future?

At least this is the opinion of Sberbank, which actively uses the blogger's popularity for its own purposes. The videos of "musician and performer" Dani Milokhin, gaining tens of millions of views, almost invariably feature the products of the Sberbank ecosystem. Financially, this is very beneficial for the 20-year-old blogger - he recently acquired the coveted Mercedes-Maybach. Integration with Milokhin and others like him also brings considerable profits to "collect".

Vladislav Kreinin, director of the marketing and communications department of Sberbank, admitted that every ruble invested in a project with a blogger brings twelvefold profit. At the St. Petersburg Economic Forum, bankers are quite seriously considering blogging money as a resource for development. The popularity of such one-day stars is enough for a couple of three, but what can a veteran blogger do?

Vines do not go to the public any more, and young competitors with even more repulsed content are stepping on the heels. So they invite bloggers from an office like Sber to bring their money to the bank, invest and save for a comfortable old age. Financial tycoons aren't the first to take notice of the potential of the blogging world. Even earlier, Milokhin considered it shameful to cling to the toxic popularity of the Basque - the clip with gold chains entered the tops of Russian show business. Multimillion bloggers are becoming "rejuvenating apples" for many pop celebrities - Timati, Kirkorov, Yegor Creed and others. And Milokhin bathes in the rays of glory, changing wedding dresses to pink and black mini-skirts.

For all this history of financial flows and fame, those for whom bloggers of all stripes perform serenades somehow remain outside the brackets. I don't want to grumble like a mossy retrograde, but the Milokhin story is very similar to a crime against humanity. Children, who are fanatical about Dani's new antics, form a quite clear guideline for the future - do what you want, and you will be happy. Education is absolutely unnecessary for this. Did Milokhin manage to buy a Maybach without a school, college or university? In fact, no matter how primitive it may sound, these are the thoughts that form in the heads of today's schoolchildren. With the growing popularity of the Milokhins, the range of those who fell under the influence only grows. 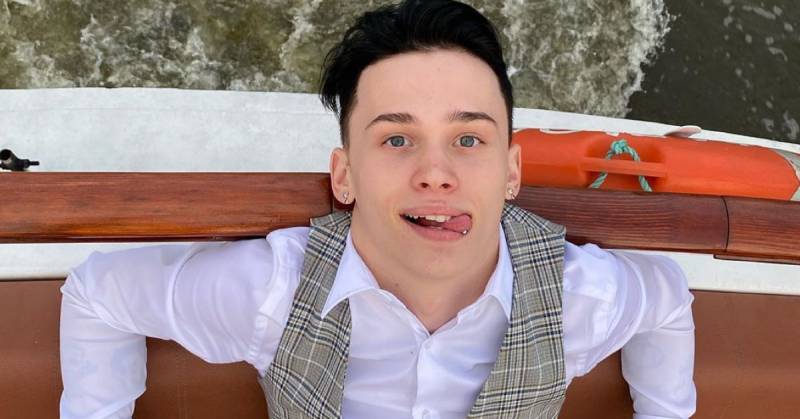 Milokhin and his language. Source: Instagram @danya_milokhin
The very idea of ​​success without secondary vocational and, moreover, higher education, has been hovering in Russia and the world for more than a decade. Conceptually, it has the right to life. After all, one can become an outstanding athlete, a virtuoso musician, and a master programmer. Robotics with artificial intelligence, frightening to many, will free some of us from work altogether in the future. Incidentally, this is one of the theses promoted by the notorious Sberbank. The much talked about basic unconditional income for all lately is also just around the corner. A person needs to look for the use of creative abilities, otherwise the state will face millions of idlers.

Now it is clear from what story Danya Milokhin?

In a dozen or two years, a lot of working hands will be freed up in the country, and Danya Milokhin becomes a real beacon for this cohort. The second message of the Milokhin concept is the fight against overpopulation in the country, despite the fact that this is outside the official policy of the state. Immersion in blogging jungle will completely deprive people of communication skills with the opposite sex. Milokhin in female images helpfully offers to expand the claims with the skills of the LGBT community. The stereotypes of masculine and feminine essence will fade into the background, and real androgynes will become our reality. The “comfort zone” we are striving for will eventually swallow us up and not choke.

Russian show business is becoming a real conductor of this story. There is a feeling that the domestic stage, dying out in a pandemic, escaped offline and simply lost its moral bearings. Philip Kirkorov, whose spirit is not far from Milokhinsky, appeared on the red carpet "paired" with Dava. Questions to this have already arisen from Roskomnadzor and common sense - the category of viewers of the show meant age from 6 years.

In the concert part of the Muz-TV award, Milokhin's performance in a pair of Baskovs continued the traditions of the freak circus. Sitting on a giant toilet, Tiktoker performed something about success and big money, and a sympathizer for the Basque history (discharged like a clown, by the way) at the end washed Milokhin down the drain. It is a pity that it is only symbolic.

Ctrl Enter
Noticed oshЫbku Highlight text and press. Ctrl + Enter
We are
Is Putin preparing a "devaluation" of the presidential election?Commentary on A. Petrov's interview “Fire and Tactics in the Russian Army: Another Look”
Military Reviewin Yandex News
Military Reviewin Google News
250 comments
Information
Dear reader, to leave comments on the publication, you must sign in.