Russia's turn to the East is inevitable 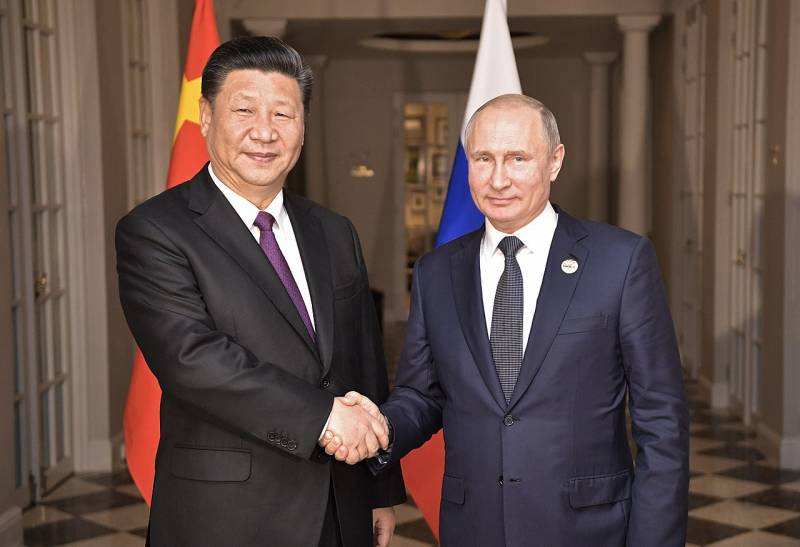 Westernization is the death of Russia

It is obvious that the meeting in Geneva - between D. Biden and V.V. Putin is aimed at destroying a potential alliance between Russia and China. It is logical that the strengthening of information, political, diplomatic, economic, sanctions pressure on Russia from the EU and the United States should sooner or later lead to an alliance between Russia and the Celestial Empire. And to turn Russia to the rapidly rising East, leaving only a “window leaf” in the West dying out and sinking in its problems.

America fears the Chinese dragon, however, as long as Beijing does not have support from the Russians, with their creative spirit (ideas, meanings and new technologies that can be multiplied), with a military spirit that does not know defeat in open confrontation, the Chinese can be contained. Therefore, the Biden administration (globalists) must preserve the cultural, financial and economic dependence of the Russian Federation on the EU and the United States.

Simple logic says that Russia and the people benefit from a strategic alliance with the Celestial Empire.

However, the Russian elite is completely in the West - in terms of worldview, capital, property, families and children. The Russian elite is firmly entrenched in the West. For her, London, Paris and Geneva are closer and dearer than Ryazan or Pskov. At the same time, the West is interested in solving the "Russian question" - the complete elimination of Russian civilization and the people, as the bearer of the Russian matrix code, which excludes the subordination or inclusion of Russia into the Western world.

The West works through the Russian elite, through culture, law, and finance. It is enslaved so that it will always be Westernized, excluding its nationalization, and keep the country within the framework of a Western project. The USA and the EU need Russia as a raw material "pipe" and "cannon fodder" directed against the East.

However, such a subordinate position of Russia (primarily through the subordination of an unjust concept of development) has led to such a terrible phenomenon, about which they generally prefer to keep quiet. This is the extinction (depopulation) of the people.

Within the framework of the capitalist system, a consumer society (self-destruction and extermination), into which Russia was inscribed after the collapse of the USSR, the Russian people are dying out. And at a very fast pace, the Russians simply will not survive the XNUMXst century at the current rate of extinction. At the same time, Russian statehood, culture, language and история... That is, the remaining Russians, taking into account the migration factor, will be turned into Russian ethnographic material.

In the short term, this is the danger of internal turmoil and a new collapse on the model of the USSR. Prices for all products in the country are growing rapidly. Big business is frantically recovering its losses during the coronavirus hysteria. This rise in prices may become a "black swan" for the Russian Federation, when all the problems that have accumulated over three decades will make a qualitative leap.

What conclusions can be drawn from this?

At firstThe West, represented by the United States, can promise the Kremlin a "carrot", but in the long term the game against Russia and the Russian people will continue.

ThirdlyThe Russian Federation is strategically lonely, unlike the USSR, Moscow has no allies in Europe, the Middle East, Africa, or the Far East. There are "partners", but they are weak and they are only interested in material handouts. The attention and resources of the Russian Federation are scattered between Ukraine, Belarus, Syria, interests in Africa. At the same time, we are losing the former sphere of influence in Transcaucasia (Azerbaijan is Erdogan's satellite, Armenia is seeking support from France, Georgia is beginning to lean toward Turkey) and in Central Asia.

It is obvious that the West will try to keep Russia in a depressed, dependent position (finances, economy, culture, westernized elite).

The only way out in this situation is to turn to the East.

China is not our friend now, but not our enemy either. Trade and economic partner. At the same time, the Middle Kingdom is a strategic competitor to the United States. Therefore, it is necessary to enter into a Russian-Chinese strategic, military-political alliance. Together to create the second pole of power, which guarantees stability on the planet.

With the help of the Chinese dragon, Russia can gain complete independence from the West. Free yourself from the Western financial stranglehold. China has economic strength, but no winning spirit. The Chinese have lost all major wars, the Russians have won everything! An alliance with Russia is an opportunity to regain Taiwan, and without a war. The "world community" led by the US and the EU will have to come to terms. Russia will provide military cover for the reunification of Chinese civilization.

In alliance with Russia, Beijing will receive an invincible Russian army near the EU borders. Russia, on the other hand, can simultaneously with China (Taiwan) resolve the issue of reuniting the entire Russian land and people (Great Russia, Little Russia and Belaya Rus, plus Transnistria-Moldova). The West will throw a tantrum, but nothing can be done when China is behind the Russians.

Russia's benefits from a fraternal alliance with China are enormous:

1. We will be able to forget about the sanctions pressure, we have a “world factory” at our service. Disconnecting from SWIFT (international interbank system for transferring information and making payments) will become a trifle. Europe will not be able to completely abandon our resources, reorientation to "green" technologies ", the supply of energy resources from the United States and the Middle East - these are all long-term prospects. Russia will gradually become China's raw material support, but on mutually beneficial terms, without the predatory plunder of Russian natural resources.

2. With the help of China, Russia will be able to carry out a new industrialization, returning to the position of one of the leading industrial powers. This will allow the revival of education, including technical, R&D and science, create new technologies, restore a powerful scientific, industrial and engineering, worker, producing society. The huge population of China is a chance to create powerful agriculture in Russia. The Chinese are interested in organic agricultural products. Russia has huge untapped opportunities to occupy this area.

3. The Chinese can help Russia create modern infrastructure, roads, build cheap housing, and give an impetus to the development of regions. Bring the Russian province out of a prolonged depression and extinction.

The Chinese themselves are interested in Russians. And not only as in warriors (the power cover of the Celestial Empire), but also in Russian raw materials, as well as in the Russian spirit of creation.

The Chinese, like other Asians-Mongoloids, do not create anything new, but they know how to develop what has already been created well and qualitatively. Not only technologies and techniques, but also social structures, ideas, meanings.

Russians are thinkers, creators and creators. Therefore, it is in China's interests to restore Russian education, science and culture.

In the future, Russia is the soul, the creative principle of human civilization, and China is the material base, the embodiment of great ideas and plans.

The Russia-China link allows humanity to get out of the current impasse of capitalism, neoliberalism and the consumer society, which are destroying the planet and humanity, and to avoid a global catastrophe.

Ctrl Enter
Noticed oshЫbku Highlight text and press. Ctrl + Enter
We are
A great interview with Sergey Lavrov: about Ukraine, Obama and IranWhat you didn't want to know about England
Military Reviewin Yandex News
Military Reviewin Google News
131 comment
Information
Dear reader, to leave comments on the publication, you must sign in.