This terrible "baba-exam". The egalitarianism is alive and will live 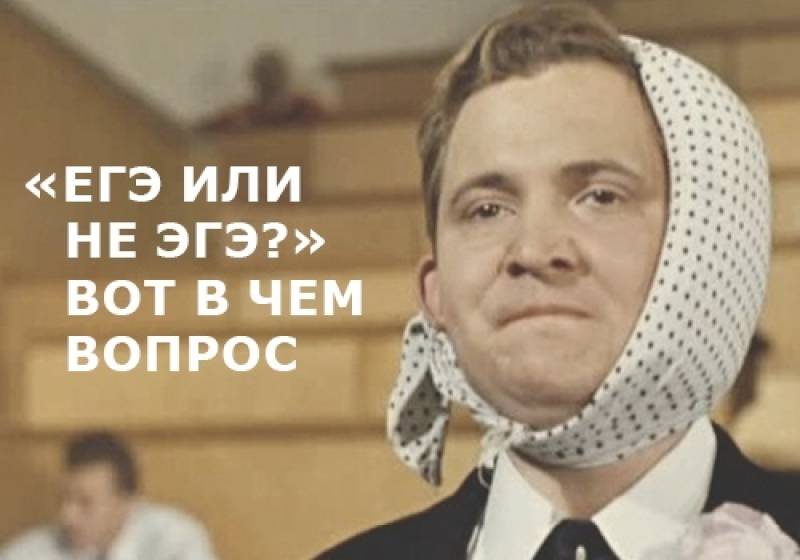 The attack on the "redoubt"

It would seem that the Unified State Exam at the very time to rest on its laurels is a decent age. But where is there! In mid-May, the school information space literally exploded. As from a cornucopia, messages and statements about the imminent elimination of the USE system, which had become hateful to many, fell.

But if earlier the parents of schoolchildren and politicians of not the highest level tried to break through the equalization system, now very weighty persons fired with armor-piercing shells. And the attack was led by the vice-speaker of the State Duma of the Russian Federation, Pyotr Tolstoy. He called the Unified State Examination "a copy of Western standards" and "violence against children and the very idea of ​​education."

"The Unified State Exam is an ineffective knowledge assessment system that forces children to spend several years memorizing the correct answers and learning how to fill out forms."

Sergei Mironov, leader of the Fair Russia faction, also supported his colleague in the State Duma.

He said that by next summer the USE nightmare will no longer be in our lives.

“Parents know from their own experience and the experience of their children what the Unified State Exam is. They cannot be fooled by the propaganda that officials are promoting at the expense of taxpayers, ”
- stressed the politician.

Profiled deputies also criticized. Thus, Maxim Zaitsev, deputy chairman of the State Duma Committee on Education and Science, believes that the Unified State Examination has not justified itself as a system - students prepare for it from the first grade, instead of acquiring knowledge. Zaitsev expressed confidence that the examination of graduates should take place in the traditional format, although it will take a long time to return to it.

One could assume that these are all statements related to the nuances of the political season. But in one thing, we can be firmly sure that the statements of politicians are the pinnacle of the protest mood that reigns in society.

A survey by the SuperJob website showed that 68% of Russians want the USE to be canceled, while among 11-graders this share is 83%. Fathers and mothers have repeatedly written petitions for the abolition of "equalization". Some even manage to teach children from Soviet textbooks, which have already become rarities. Particularly ideological even founded their own schools, believing that knowledge is more important than the results of faceless tests.

The main complaint about the Unified State Exam is fooling children. Schools are designed to train students to take tests-exams, and the task of filling with knowledge and expanding the horizons of the younger generation has faded into the background, or even to the background.

Schoolchildren devote very little time to general development, they do not understand stories and literature, and their vocabulary is frankly poor. The Internet has become the main "library" for them, from which they take out fakes, inventions and superstitions, which are then broadcast as true statements.

The same Internet is replete with memes and caustic statements about the state exam. Teachers, tutors and parents give colorful examples of the USE-disease. How will you like the book "Woe: About the Fog!" "," The attempt was unsuccessful "," face crowned with hair ", etc.

One of the teachers writes that children do not know many words, which, logically, should already be in the asset. Thus, high school students (ages 14–16) did not know the meaning of the word “dependent”. The interpretations of this concept offered by them turned out to be very different: "warrior", "disobedient", "a man who was dependent", "who gets up early."

Practically no one understands the word "supine", things are no better with the words "redhead", "crimson", "turquoise", "crushed". If you go through the personalities, then the children simply do not know many famous figures. As a result, they turned Mandelstam into Mimmelshtoy, Tsiskaridze into Tsytskaridzh, Agniya Barto into Burto, and they considered Babel a woman, because he looks like a "baba". 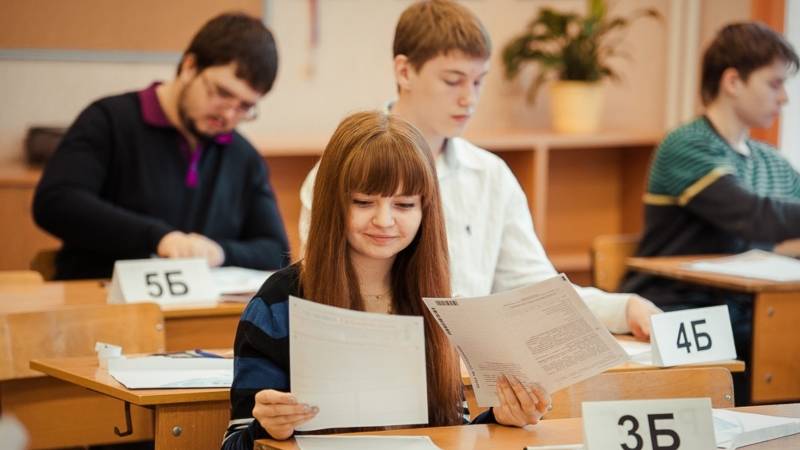 Photo: Ministry of Education and Science
All this could be attributed to individual shortcomings of the modern educational process. Some will say: that you attacked children, adults are not better, ask them: who is Biryusa, few will answer.

However, criticism of the USE system touched on the basis of innovation with 20 years of experience. After all, the main reason for the emergence of the test approach, as the Minister of Education of the Russian Federation Vladimir Filippov (in 1998-2004) formulated, is avoiding corruption when entering universities: bribes make it impossible for talented children to enter universities.

And here, please, just the USE-assessment, which equalizes everyone. Talented youth from the provinces will take advantage of the social lift and enter the capital's universities.

But it turned out that inequality has not gone anywhere, it has simply moved from universities to schools, changing its appearance. It is surprising that the children of diplomats continue to study at MGIMO, while at the HSE there is a concentration of young men and women of "successful" parents. Beneficiaries, targeted recruitment and additional tests, which theater, art and music universities use with might and main, have not gone anywhere.

As a result, the latter are filled with offspring from theatrical and film families.

But because the last two years at school are not studies, but training for passing the USE tests. If parents have funds for this kind of training (preferably early), then children have a significantly higher chance of getting into an elite university.

Another challenge is keeping track of student portfolios of athletic, artistic and scientific achievements. Moscow schoolchildren are obviously more likely to acquire a significant "portfolio" than their peers from the provinces.

It's only the beginning

In general, the slogan "Down with the exam!" already posted in full breadth.

But will the sphere of education return to the traditional format: essays and answers on tickets to teachers?

Unlikely. Education officials persist in saying that there is no alternative to the Unified State Exam in our country.

Moreover, the bureaucrats are supported by a significant part of the experts. They note that before the introduction of the Unified State Exam, the formation of the student body was largely the lot of the community that revolved around universities. Universities earned money from their courses, and teachers from tutoring.

It has developed its own economy, which was just destroyed by the USE innovation. And, perhaps, experts point out, the message of a return to the old "traditionalism" comes from the camp of the offended.

In other words, returning the old system means returning to high corruption risks and significantly reducing educational mobility within the regions. In addition, officials note, the USE has significantly transformed over the past time.

These are not simple tests for a long time, where you need to choose one answer option and it can be easily guessed. You won't be able to hit the sky with your finger. Try to pass the trial exam yourself. It turns out that you need to analyze a lot, find arguments - that is, work with your brains and have real knowledge.

Further more. Rosobrnadzor says that in ten years we will see a completely different algorithm for assessing students. All achievements of schoolchildren, participation in olympiads, circles, diplomas, letters will be recorded in their "digital biographies". And applicants will enter universities with the help of personal portfolios, where the USE will be only one of the components.

“The Unified State Exam will take on a new form in the next decade. By 2030, we will see a completely different procedure, this is associated with digitalization, ”
- said earlier the head of Rosobrnadzor Anzor Muzaev. According to him, we are on the verge of the fact that it will soon become possible to objectively assess not only the knowledge of a particular school subject, but also other achievements: creativity, creative, sports and other abilities of the child.

At the same time, Murzaev stressed that it would not be possible to completely abandon the USE, since the possibilities of extracurricular activity of schoolchildren in megacities and villages, small towns are seriously different. Therefore, the testing mechanism, like a social lift, will still remain.

In the meantime, get ready: in 2022, officials promise to introduce the Unified State Exam for all categories of graduates - both for those who enroll in universities and for those who have chosen to stay in 11 grades for now.

Ctrl Enter
Noticed oshЫbku Highlight text and press. Ctrl + Enter
We are
About Stalin and KhrushchevWhat you didn't want to know about England
Military Reviewin Yandex News
Military Reviewin Google News
290 comments
Information
Dear reader, to leave comments on the publication, you must sign in.