Soviet ship as part of the US Navy rapid reaction force 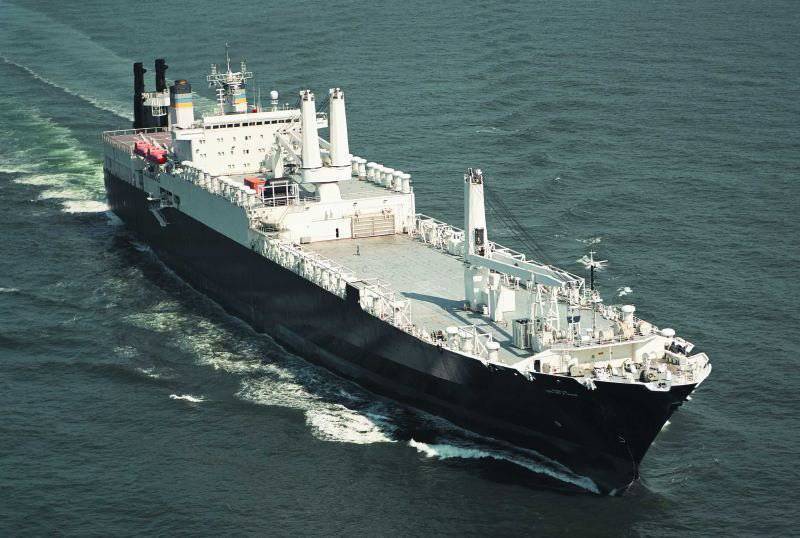 On the world market of civilian freight and military transport, a significant proportion is occupied by Soviet and Russian vehicles. Receive regularly newsrelated to the An-12 or Mi-8 incidents somewhere in the impassable jungle of the Republic of the Congo. The Soviet Union disappeared 20 years ago, but Soviet aircraft continued to fly in large numbers in those parts, showing reliability miracles: the aircraft are being used against all the rules and regulations, without the necessary maintenance for many years. During this time, their parts and assemblies have developed several resources, but Ana and Ila regularly serve the cargo traffic.

18 July 2012, the Pentagon’s website published official information about the purchase of 10 Russian helicopters (http://www.defense.gov/contracts/contract.aspx?contractid=4835 - knowledge of English is not necessary, everything is clear in the first line) . The exact amount of the contract is $ 171,380,636. The delivery of the Mi-17 (export version of the Mi-8) should be completed in the 2016 year. It should be noted that the Russian equipment is not bought at the price of scrap metal: $ 171 million for ten helicopters - for 17 million dollars for each car! Almost as much is the American Black Hawk multipurpose UH-60 - from 20 million dollars per unit. Of course, the operation of Russian helicopters is, on average, cheaper, but it is clear that the Pentagon’s “helicopter adventure” arose not only because of the desire to reduce the cost of purchasing equipment. The Mi-8 family of helicopters impressed the American military with its simplicity and reliability, while the payload of the “fat” Mi-8 was quite expected to be greater than that of the Black Hawk. And during transport missions in Afghanistan, high-tech equipment UH-60 turned out to be largely unnecessary - the helicopter was only required to take on board the cargo and deliver it to the specified point. The use of heavy Chinook helicopters has led to an increase in transportation costs, they are more vulnerable and less adapted for flying in the mountains.

There has long been a project related to the lease of An-124 for the needs of NATO. Since 2002, Volga-Dnepr has been providing international cargo services to Afghanistan using IL-76 and An-124 Ruslan. In 2006, the NATO command concluded a lease agreement for six Ruslans - three Russian (Volga-Dnepr) and three Ukrainian (Antonov Airlines). After the plane crash in Lashkargah in 2006, it became known about the use of An-26 aircraft as part of the units to support special operations of the US Air Force.
The success of the former Soviet technology is logical, and this is confirmed by our following история.

What unusual can be in the ship "Young Corporal Roy Wit"? Only one of the twelve rolkers belonging to the Maritime Transportation Command (Military Sealift Command). Like the rest of the US Navy transport ships, a large elegant roll-on container ship is used to supply American troops around the world. But the main secret of the gas turbine rolls USNS LCPL ROY M. WHEAT is that initially it was “Vladimir Vaslyaev” - the beauty and pride of the Black Sea Shipping Company.

In 1979, in Nikolaev, the unique Kapitan Smirnov gas turbine ship, the lead ship of the 1609 Atlantic project, was launched. Over the next year, similar types of “Captain Mezentsev” and “Engineer Yermoshkin” left the stocks. The last in the series of gas turbine avenues of the 1609 avenue was “Vladimir Vaslyaev”, 1987 year.

Four large-capacity rolker (English roll - roll) were intended for the carriage of goods on the wheelbase (cars, trucks, special equipment, etc.), and if desired, could be used as container carriers. The equipment was driven onto the deck under its own power - for this purpose, a wide ramp (folding part of the stern) was provided in the stern. Three horizontal cargo compartments had a capacity of 54313 cube. The cargo was located on the 4's decks and on the second floor. For the movement of cargo inside the vessel, on board Ro-Rokers, there were 14 auto-loaders manufactured by Valmet (Finland) and stationary internal ramps with inclination 7 ° leading from one deck to another. 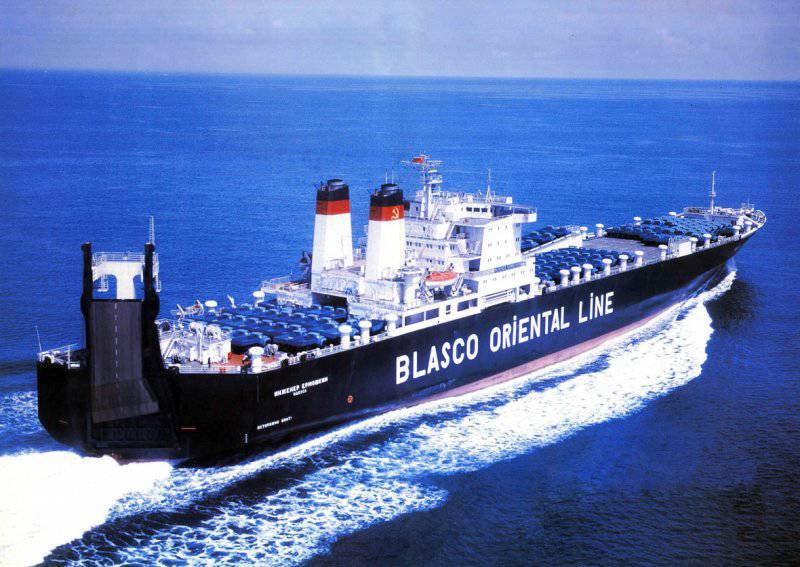 "Engineer Emroshkin" with a peaceful cargo under the Soviet flag
But the main feature of the gas turbine type "Captain Smirnov" was a high speed, unprecedented before for civilian vessels - at full speed a huge roller with a displacement of 36 thousand tons easily developed 25 nodes. The vessel "Captain Smirnov" worked on the Black Sea - Vietnam line and for 50 days visited 16 ports.

Gas turbine vehicle, as its name implies, is driven not by ordinary low-cost diesel engines, but by powerful gas turbines. The power plant "Captain Smirnova" issued on the shaft 50 thousand liters. with. Such an unexpected choice of the type of power plant for a rokker raises some doubts about the purpose of the vessel. The fact is that the gas turbine, ceteris paribus, is inferior to diesel in terms of efficiency, and the speed of 25-26 units for a commercial vessel is clearly excessive. For comparison: the modern container ship of the highest ice class "Norilsk Nickel" (29 thousand tons, built in 2006 year) is driven by an azipod-type steering column with a capacity of about 18 thousand liters. with.

Indeed, "Captain Smirnov" never went at full speed - the main gas turbine units in the main operation worked in a "cross mode", in which there was a gas turbine engine and a heat recovery boiler on one side and a steam turbine on the other side. This made it possible to somewhat reduce fuel consumption, the rate “decreased” to 19 — 20 knots, and the fuel consumption per mile was 210 kg.

The strange construction of the Rokker means the following: “Captain Smirnov” was created as a warship! Let me clarify my point: the roller had a dual purpose - if necessary, “peaceful Soviet transport” could be quickly converted into a high-speed supply transport. And it could not be otherwise in the USSR, even if the diameter of cigarettes and pasta corresponded to the caliber of ammunition.

High-speed transportation of supply is an excellent tool for warfare on foreign shores. A few days after receiving the order, “Captain Smirnov” would have lowered his aft ramp to the berth in the port of Tartus, and a hundred or two armored personnel carriers with armor heavily covered with paratroopers would slide down from it under the caressing Mediterranean sun. High-speed roller skaters can be successfully used for the delivery of important cargoes - several C-300 divisions may move instead of armored cars to the shore, for example. 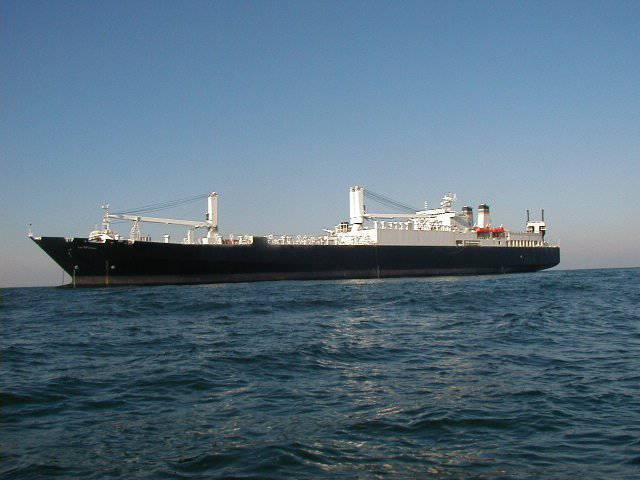 USNS LCPL ROY M. WHEAT - Amazingly Elegant Ship
For comparison: large landing ships of the 775 Ave. (Caesar Kunikov) have a displacement of 4000 tons, the maximum travel of 18 knots, cruising range is 6000 miles per 12 knots. (for the "Captain Smirnov" rocking club, 16 000 miles on 20 knots). Of course, it is incorrect to directly compare the ocean gas jet ship with a tank landing ship - they have completely different designs and tasks. But, I hope, readers have understood my point - a high-speed roller could deliver 20 thousand tons of cargo to anywhere in the world.

Another confirmation of my conclusions about the military mission of the ship: the unrealized project of the anti-submarine helicopter carrier of the 10200 Avenue Halzan was created on the basis of the “civilian” rocking ship “Captain Smirnov”!

Was this an effective solution: instead of real military and commercial ships, build dual-use hybrids? As is known, the universal remedy is always inferior to the specialized one, and the standards of military shipbuilding have a bad effect on the characteristics of commercial ships. Nevertheless, the Rocking machines honestly worked in the Baltic and Black Sea Shipping Companies, and even remained profitable thanks to the ingenuity of the ship "rationalizers", such as the "cross mode" of the GEM. Over the 12 years of operation, the crew of "Captain Smirnov" introduced 100 performance proposals, which in itself is alarming. As a result, the ship increasingly acquired the features of an ordinary commercial vessel.

As for the possible issue of re-equipping "Captain Smirnov" -type rollers as an ersatz aircraft carrier (helicopter carrier), this is most likely a fantasy. For basing aviation on the deck will need a radical restructuring of the ship. Where to store jet fuel? Where to accommodate several hundred people (standard crew of a roller - 55 people)? A few months on the upper deck will kill helicopters - aircraft carriers must have a hangar. Mount any removable structures on the flight deck? - It is easier to replace damaged aircraft. Set up a deck hangar? Most likely, the helicopter will not enter in height - you have to cut the whole ship. Plus the cost of one or two lifts. And is it possible that someone will send an absolutely unprotected ship to the zone of possible military operations? It will require the installation of several self-defense systems, the replacement of radar and electronics. As a result, we get a very expensive hybrid with truncated characteristics. 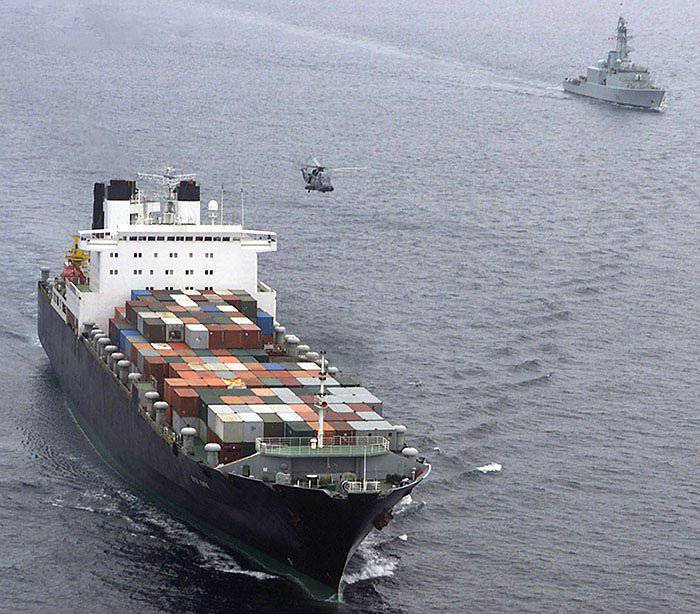 After the collapse of the Soviet Union, all four Rocker went to Ukraine and were privatized. Not knowing how to dispose of honestly acquired property, their owners sold four huge handsome companies to Global Container Lines and Marianna Shipbuilding Ltd. In 2001-2002, three of them ended up in a scrap yard in India. The remaining "Vladimir Vaslyaev" joined the ranks of the US Navy.

The Americans conducted a radical modernization of the ship: the ship's hull was disassembled and extended by inserting an additional section. The full displacement of the rokker increased to 50 thousand tons. The ship power station was replaced - the American equipment is designed for the frequency of the current 60 Hz. The rest of the design of the Roker is not changed - its unique power plant remained the same. Even with the USNS LCPL ROY M. increased in 1,5 fold, WHEAT is now able to develop 20 nodes. With the introduction of more automation, the crew of the Rokker was reduced to 29 people.

Due to its unique characteristics, the former Soviet ship was selected among other 30 ships to the rapid reaction force group - an elite unit of the Shipping Command.
What can be said in conclusion? The admirals of the US Navy have a great taste - among thousands of ships abandoned to the mercy of the Soviet fleet they were able to choose for themselves the most valuable. 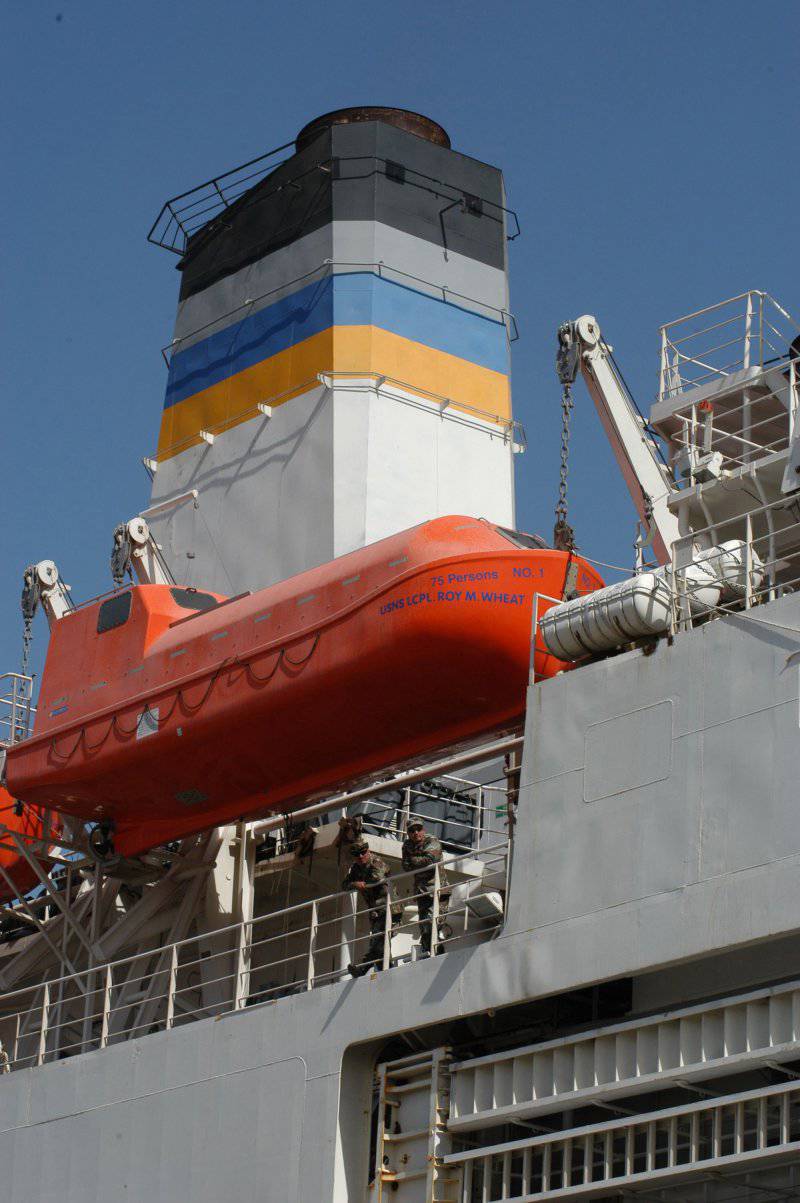 Flag of Ukraine Square? No, this is just a quick response symbol. The sailors form completely dispelled all doubts.

Note:
The author has some doubts about the successful unloading of the "Kapitan Smirnov" type of roker in the port of Tartus. For example, the aircraft-carrying cruiser "Admiral Kuznetsov" during a visit to 2012, was unable to moor because of its colossal dimensions and stood in the roadstead.