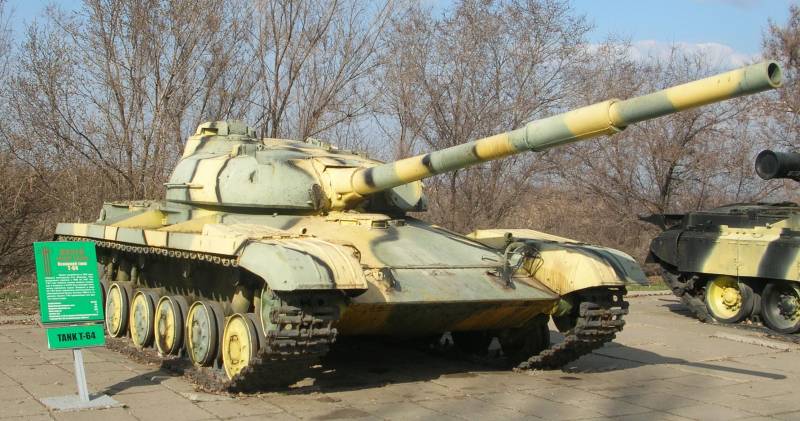 The T-64 is a vehicle that had to be refined right away. Largely because of the 5TDF diesel engine. Source: ru.wikipedia.org


As mentioned in the previous part stories about the unique 5TDF diesel engine, the roots of the power plant go back to aviation motor building. And first of all they are associated with Alexei Dmitrievich Charomsky.

Charomsky began to deal with the diesel theme back in 1931, when at the Central Institute of Aviation Motors named after V.I. PI Baranov (TsIAM) created a group of diesel engine builders or, as they were officially called, "the department of oil engines." By the way, Vladimir Yakovlevich Klimov became the head of the second "department of gasoline engines", after whom the world famous engine building company will be named.

A sign of the 30s was the rush pace of development of everything and everyone - the country's leadership demanded the solution of the most difficult technical problems and putting it into production within a couple of years. Charomsky's group was supposed to develop a whole line of diesel engines of various classes, but in the end, only one came out. It was a 12-cylinder "oil" AN-1 with a capacity of 913 liters. with., which was supposed to be mounted on bombers. By the way, Charomsky's engine turned out to be quite modern. 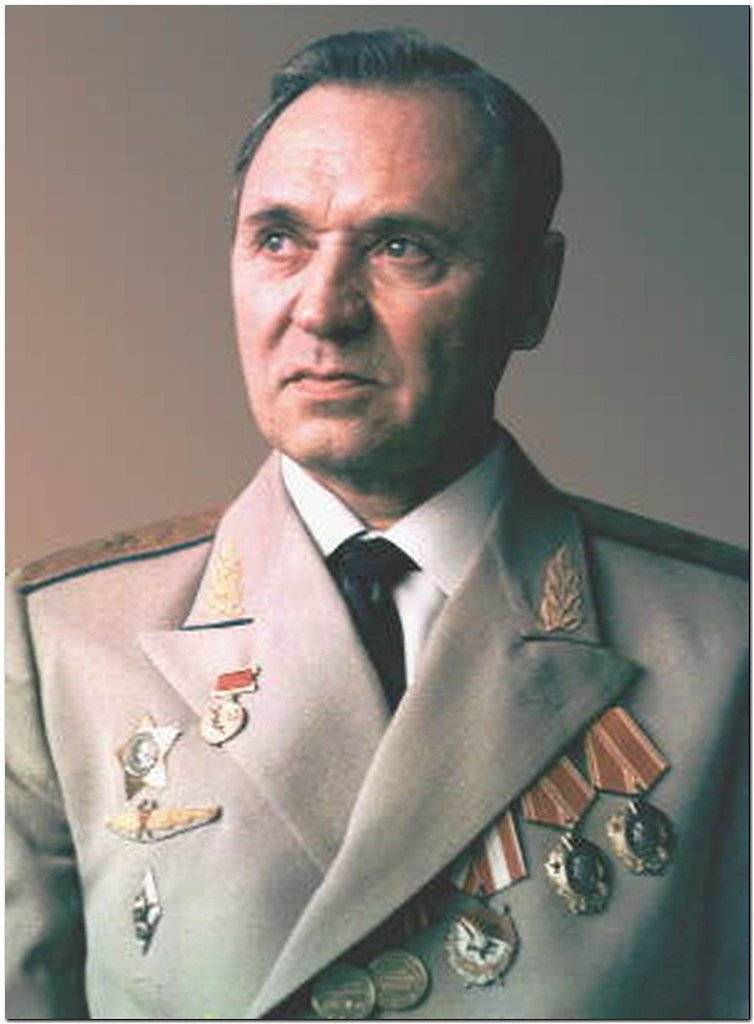 Alexey Dmitrievich Charomsky. Source: ru.wikipedia.org
When compared with the captured Jumo 205 from the Junkers Ju 86 bomber, the AN-1 showed itself on the good side - it was more powerful, more reliable and worked more stable. The history of the AN-1 was long and inglorious.

But the German diesel deserves a separate mention. It was a 6-cylinder, 12-piston, vertical-cylinder diesel engine. The 600-horsepower unit came to the Soviet Union during the war in Spain and aroused genuine interest among engineers. After a two-year study, it was decided not to adopt the exotic scheme and continue to work on V-shaped motors. The official version is that the German diesel is too unreliable, although it has high specific characteristics. In fact, the captured motor was too complicated for production at the factories of the USSR at that time, and full compliance with the technological cycle was impossible.

The attentive reader will surely see in the scheme of the two-stroke turbo-piston Jumo 205 a prototype of the future post-war tank diesel 5TD and will be absolutely right. German ideas will find their embodiment at a completely different level in the USSR in the early 60s. It was then that the high specific characteristics of the diesel engine came to the fore. Only not with the aviators, but with the tankers. 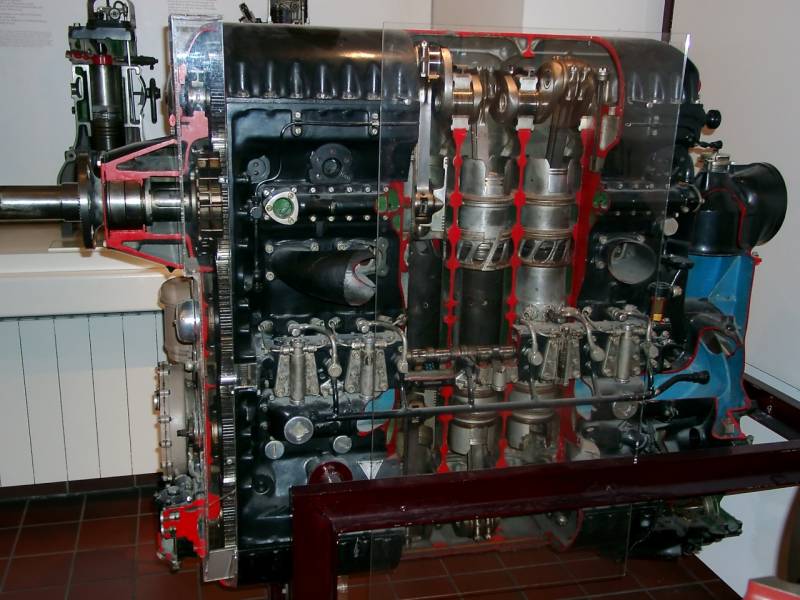 Jumo 205 is the ideological inspirer of Alexei Dmitrievich Charomsky. Source: ru.wikipedia.org
But let's return to 1938, in which Charomsky was sent to the NKVD sharashka at plant number 10 for 82 years for a delay in the development of aircraft diesel in the same year. Here he developed two diesel engines - a 24-cylinder M-20 and a 12-cylinder M-30. The latter went into series and even managed to take part in the bombing of Berlin on August 11, 1941. One of the TB-7s was equipped with 1500-horsepower Charomsky engines.

Some commentators talk about the aviation past of the B-2 tank with some disdain, they say, they could not tank engineers cope on their own. There are several aspects here.

Firstly, in Kharkov, the experience of diesel engineering consisted exclusively in the construction of low-speed marine engines.

Secondly, only the aviators at that time had at least some skills in creating high-speed diesel engines. And high-speed diesel engines for land vehicles have completely different requirements for design, materials, and mass-dimensional parameters. Therefore, it is quite logical that the AN-2 aircraft diesel engine solutions were taken as the basis for the B-1 design. Simply because nothing else was at hand, and the war was already so close.

But let's return to the fate of Alexei Dmitrievich, who was released from prison in 1942, and until the beginning of the 50s he was exclusively engaged in aircraft diesel engines. But the era of piston technology in aircraft construction was leaving, and Charomsky was not predisposed to the development of jet engines.

Kharkov 5TDF was born from the U-305 single-cylinder compartment. This compartment was a kind of module of a large 10000-horsepower M-305 diesel engine, which Charomsky tried to attach to aviation in the early 50s.

Alexey Dmitrievich took as a basis the German Jumo 205 engine, half-forgotten by that time. It was not possible to create a serial engine, but Charomsky defended his doctoral dissertation on this project.

Whom should they contact with an exotic idea that was unnecessary for aviators?

For shipbuilding, the engine was too fast and low-resource. Remained - tankers, who were just thinking about the technology of the new generation.

The chief designer of the Kharkov plant, Alexander Alexandrovich Morozov, took the idea very well and immediately appointed Charomsky as the chief for tank engines in Kharkov. And here again peculiar circumstances intervene.

In Kharkov, in the early 50s, practically no one was left in the engine design bureau from the pre-war composition. Most of the evacuated engineers settled in the Urals and gradually brought to mind the proven design of the B-2 there. Only a few have returned home to plant No. 75 from the Chelyabinsk Tractor Plant. To take the palm from the legendary "Tankograd" and Nizhny Tagil, the Kharkovites needed a revolution. And in the motor-building business, Charomsky became the main revolutionary, in the shortest possible time he gathered a strong design bureau around him.

The first prototype was a four-cylinder 4TPD assembled from four U-305 modules. The diesel turned out to be rather weak - only 400 liters. with., and it was decided to add another cylinder. This is how the 5TD "suitcase" appeared already with 580 liters. from.

In January 1957, the motor passed state tests. But the promising T-64 was definitely not enough, and the chief designer Morozov put forward demands to increase the power by another 120 hp. from. Charomsky, if you follow the official version, just at that moment leaves the post of chief designer of motors at Kharkov plant No. 75 for health reasons.

However, his health condition allowed Aleksey Dmitrievich to work for 15 years later as head of a department and deputy chief designer of the Institute of Engines of the USSR Academy of Sciences. Therefore, it is quite logical to assume that the real reason was either the conflict with Morozov, or the inability to bring the 5TD design to the required recoil parameters.

However, there is a third assumption - Charomsky understood from the very beginning that in a five-cylinder version it is extremely risky to squeeze 700 hp out of such an engine. from. Serious forcing, which was resorted to in the future in the 5TDF version, negatively affected the resource and reliability of the tank diesel engine. 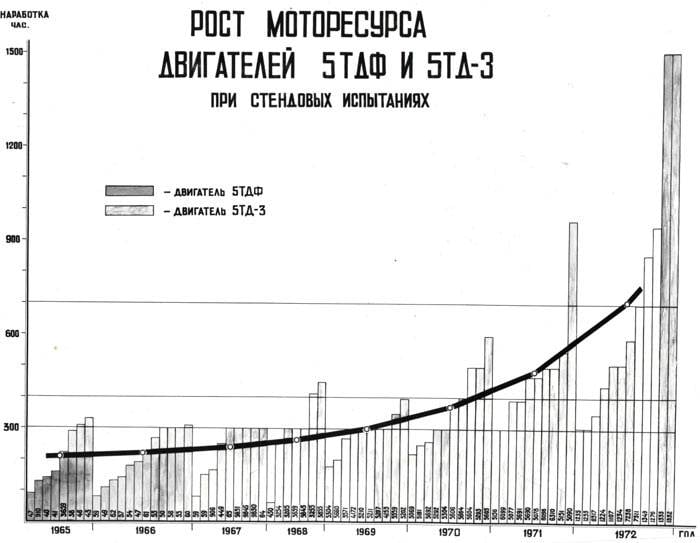 Diagram showing the dynamics of 5TDF improvement. Source: btvt.info
After the departure of Charomsky, Leonid Leonidovich Golinets was appointed the new chief designer of the diesel engine.

By March 1963, the 5TDF variant of the required power of 700 liters. from. successfully coped with 200-hour tests at the factory, and a year later with 300-hour tests. But these were only tests at the factory. The military acceptance, always famous for its rigor in the Soviet Union, brought 5TDF out of the “comfort zone”. As a result, in 1964, joint tests with the military, the two presented motors failed, having withstood 22 and 82,5 hours of continuous operation. There were years of improvements ahead, some of which were already in military operation after being put into service.

Oil instead of diesel

The history of the "oil engines" that Charomsky had been developing since the 30s would have been incomplete without experiments in replacing diesel fuel for tanks with oil. According to Russian engineers, the potential ability to "digest" oil would be very useful in a war. The rear units did not have time to bring diesel fuel - and the advancing tankers refueled their vehicles from the nearest oil pipeline. Fortunately, the Soviet Union had already built the Druzhba pipeline to Europe by the 80s.

The experimenters did not dare to pour oil into the T-64 with its capricious 5TDF, but took the proven T-55. Apparently, they realized that the engine after the experiments would go for decommissioning, and it would be better to get off with a little blood.

On oil, the specific thrust of the V-2 diesel engine decreased by 20-30%, the average speed fell by 12%, the track fuel consumption increased by almost a third, and the cruising range fell by 22%. The oil naturally rapidly coked and tarred the injectors, did not burn completely in the cylinders and flew out into the exhaust tract, where it burned out. In such cases, the T-55 glowed with one and a half meter tongues of flame from the exhaust pipes.

Amazingly, the cylinder-piston group did not suffer much and was only slightly covered with carbon deposits. The engine oil felt much worse - after 20 hours of operation, it thickened so much that it threatened to stop its supply to the rubbing surfaces of the diesel engine. As a result, the coarse oil filter was clogged with all the ensuing consequences.

But in the conclusions of the experiment, the authors still gave recommendations on the possibility of refueling the tank in extreme conditions with oil from the nearest pipeline. At the same time, the tank was enough for only 1,5-2 hours of hard work.

Only now, the structurally refined 5TDF had nothing to do with these curious (or barbaric) tests.