Artillery of the future: modernization of the ACS 2S19 "Msta-S" and its prospects 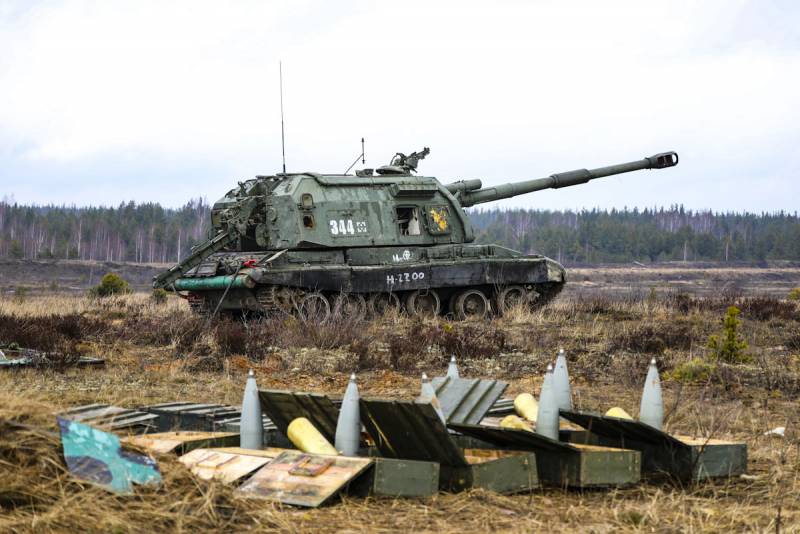 The Russian ground forces are armed with several types of self-propelled artillery units with different characteristics and capabilities. To date, the most widespread vehicles of this class are ACS 2S19 "Msta-S" of a number of modifications. They will have to continue serving for a long time, and for this a deep modernization program has been launched and is being successfully implemented.

"Msta-S" entered service in the late eighties. However, the production of such equipment in small batches has been carried out since the first half of the decade. Later, a full-fledged series was mastered, intended for the rearmament of the Soviet army. After the collapse of the USSR, the existing equipment was divided between the new states, and Russia continued production. According to known data, at least 1100 self-propelled guns of several modifications have been built to date.

The development processes of the basic self-propelled guns started immediately after being put into service. During the nineties, the 2S19M project (aka 2S33) was developed, which provided for the introduction of a number of new devices. Its updated version, 2S19M1 in the second half of the two thousandth, reached the point of adoption. Self-propelled guns of the "M1" version were rebuilt from the existing machines in the order of repair and modernization. 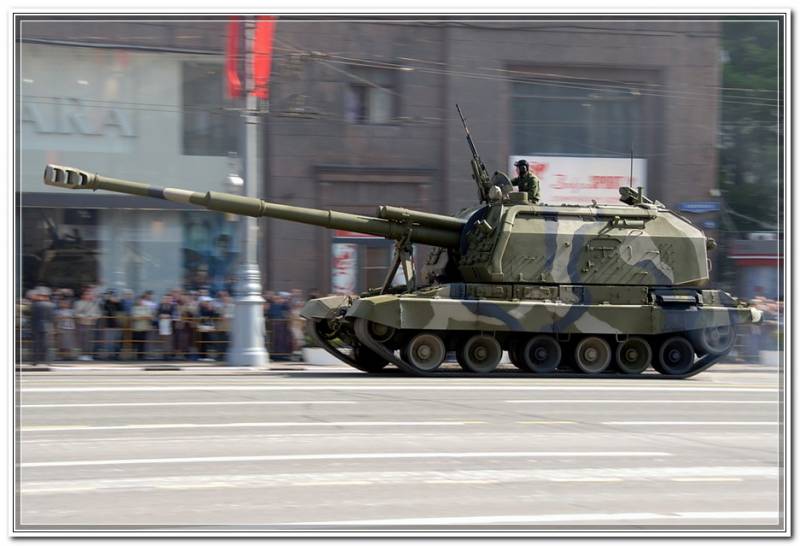 Upgraded self-propelled gun 2S19M1
Then work began on a new modification - 2S19M2 "Msta-SM". Various updates were proposed again, affecting controls, weapons, etc. In 2012, the modernized ACS passed state tests and was recommended for adoption. The following year, the industry began to supply equipment of this model. Msta-SM can be built from scratch or rebuilt from the equipment of previous modifications.

According to The Military Balance 2021, the Russian army currently operates 820 Msta-S self-propelled guns of all major modifications. The authors of this publication counted 500 combat vehicles of old modifications 2S19 and 2S19M1, as well as 320 modern 2S19M2. In addition, 150 self-propelled guns were put into reserve. Thus, in terms of their number, the 2S19 family machines have by now bypassed the older 2S3 "Akatsia" self-propelled guns with a gun of the same caliber. The active fleet of such equipment includes 800 units, although there is a reserve of 1000 units.

The release of the updated ACS 2S19M2 was mastered by the Uraltransmash enterprise with the participation of a number of other organizations supplying new components and assemblies. Thus, the production of a modernized 152-mm howitzer is carried out by the Barricades plant. The production line was prepared in 2012, at the same time as passing government tests. 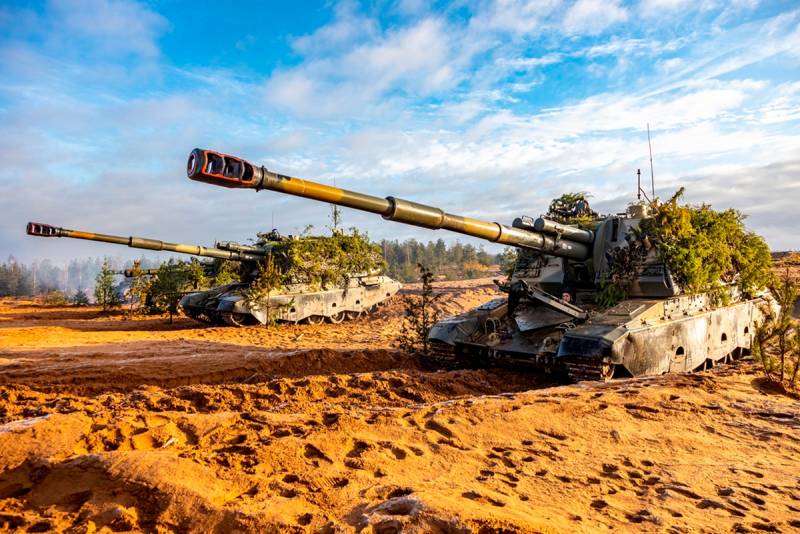 Modern self-propelled guns 2S19M2 "Msta-SM"
As reported by the Ministry of Defense, the first batch of modernized self-propelled guns entered the troops in June 2013, 35 units. such equipment was transferred to one of the artillery units of the Southern Military District. Soon there were reports of the use of updated machines during the exercise.

In the future, production maintained the required pace and ensured regular deliveries of new and modernized equipment to the troops. For example, plans for the past year provided for the delivery of more than 35 self-propelled guns "Msta-SM". As far as we know, they were successfully carried out and ensured the rearmament of one of the units.

On May 31, the state corporation "Rostec" announced the completion of construction and the shipment of the next batch of self-propelled guns 2S19M2. This equipment was manufactured as part of the state defense order for 2019-21. and was built on time. The number of armored vehicles built, as well as the place of their future service, is not specified.

Most likely, the process of production and modernization of equipment will continue in the future. Thanks to such processes, modern ACS "Msta-SM" over the next few years in their number will be able to catch up with the equipment of previous modifications, and then bypass them. Even with the protection of the total number of self-propelled guns at the same level, this will significantly increase the potential of artillery as a whole. 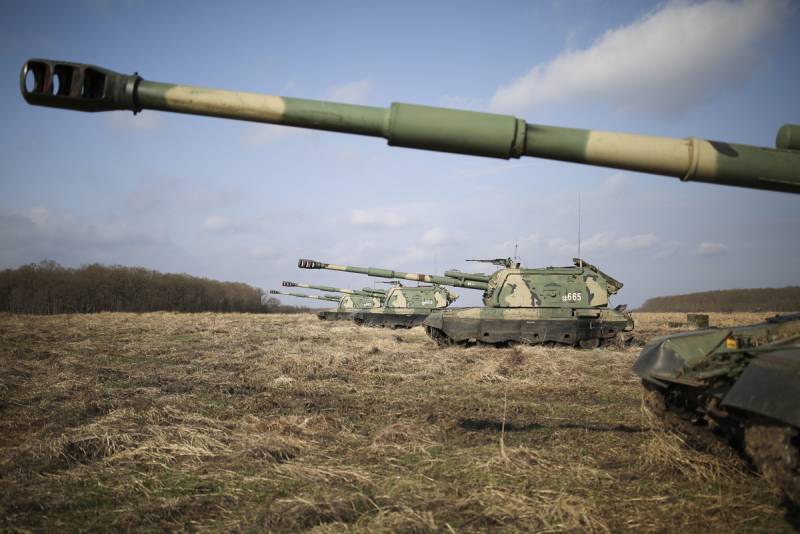 The 2S19M2 project provides for a comprehensive modernization of the basic armored vehicle with the replacement of some of the components, due to which an increase in all main characteristics and a number of new opportunities are provided. New systems and units were introduced without changing the architecture of the machine, as well as with minimal impact on its exterior.

The chassis of the ACS remains the same and retains the original set of nodes and the same characteristics. At the same time, a new diagnostic system has been introduced, which provides the driver with up-to-date data on the condition of the car. This to a certain extent simplifies the operation and maintenance of self-propelled guns.

At the same time, the main modifications of the Msta-SM project affect the equipment of the fighting compartment. The self-propelled gun receives an improved 152-mm 2A64M2 rifled howitzer. Due to a number of innovations, the rate of fire has been increased to 10 rds / min. and improved other parameters.

Modern equipment with a high degree of automation is used. ACS received navigation devices with the ability to use digital maps and receive satellite signals. In the fire control system, some devices have been replaced, and weather sensors and other devices have been introduced. After such an upgrade, the self-propelled gun shows increased accuracy and firing efficiency. Also, there was a "squall of fire" mode, obtained due to the modern MSA and high rate of fire. If necessary, fire control can be carried out remotely from a battery command post. 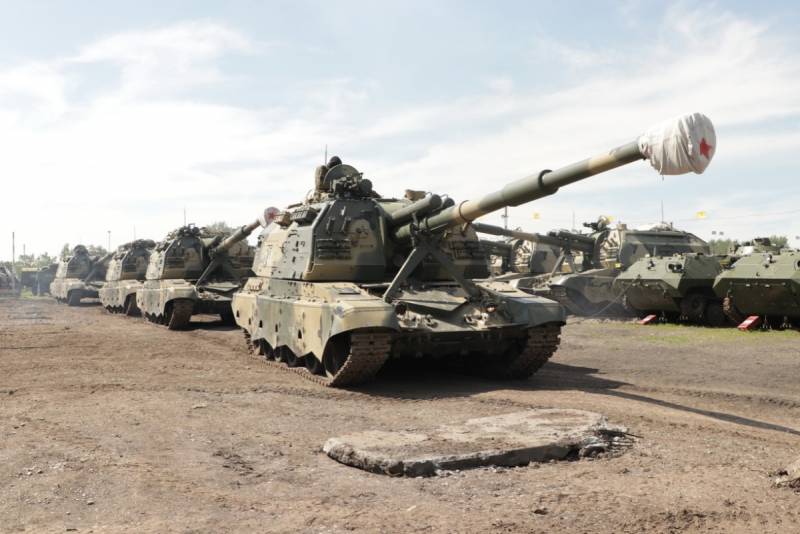 There are certain ways for the further development of self-propelled guns that can provide a new increase in performance. In the recent past, the management of Uraltransmash talked about the possibility of creating a new generation of ammunition. At the same time, plans were announced for a new improvement in operational characteristics.

Artillery of the near future

ACS 2S19 of all modifications are qualitatively superior to the older "Acacia". By now, a quantitative superiority over all other 152-mm self-propelled systems has also been ensured. At the same time, the production of new equipment and the modernization of existing machines continues, which has obvious positive consequences.

A completely new self-propelled gun 2S35 "Coalition-SV" has already been developed and is being prepared for a full-scale series. However, the production of a large amount of such equipment will take a lot of time, and therefore the Msta-S of various modifications will still retain its place in the army. Over the next few years, it will remain the most massive and effective self-propelled gun of the Russian army. It can be expected that during this period, at least most of the available equipment will be upgraded to Msty-SM. 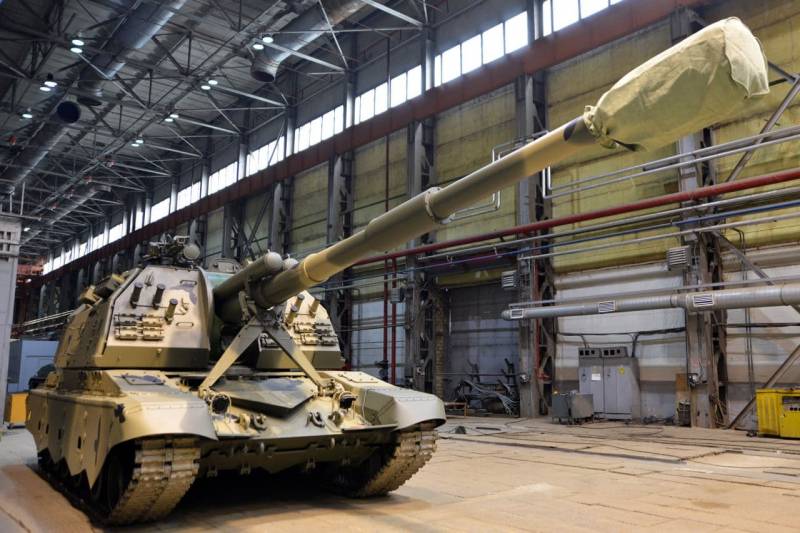 In the future, after receiving a sufficient number of new "Coalition-SV", the army is unlikely to quickly abandon the older 2S19M1 / 2, although other types of equipment should be expected to be removed from service. The mixed composition of self-propelled artillery will again allow obtaining the maximum possible characteristics and capabilities, as well as providing high flexibility of use for solving a variety of fire missions.

Thus, the processes observed now are of particular importance for the near and distant future of army artillery. The gradual replacement of older 2S19s with modern 2S19M2s does not just ensure the preservation of equipment in service and increase its characteristics. Due to these processes, a large reserve is also created, which will determine the appearance and capabilities of artillery units in the near and distant future.

Ctrl Enter
Noticed oshЫbku Highlight text and press. Ctrl + Enter
We are
God of War. SPG 2S19 "MSTA-S": more than 30 years in the armyArtillery. Large caliber. "Msta-S" outside and inside
Military Reviewin Yandex News
Military Reviewin Google News
61 comment
Information
Dear reader, to leave comments on the publication, you must sign in.