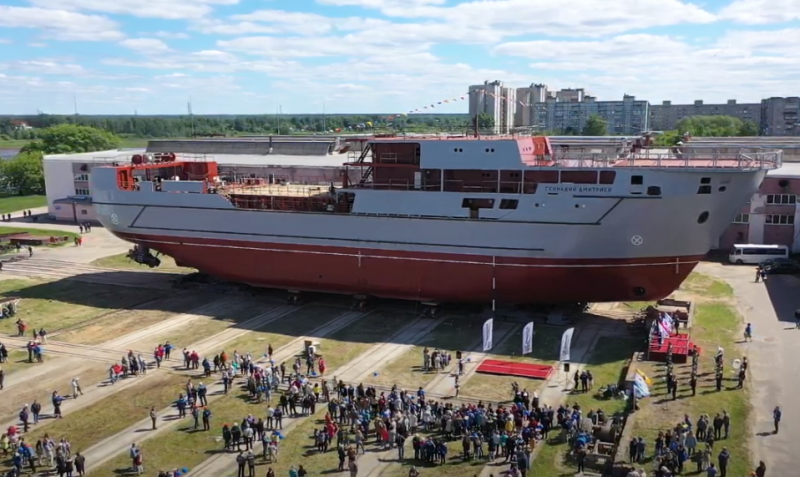 The newest maritime armament transport "Gennady Dmitriev" of project 20360M was launched in Rybinsk. The ceremony took place at the Vympel shipyard.


As noted in the press service of the enterprise, this is the largest vessel built at Vympel in its entire history... The contract for its construction was signed with the Ministry of Defense in 2016. After launching, the vessel will be completed, after which it will be towed to the delivery base in Sevastopol for testing. "Gennady Dmitriev" will serve at the Black Sea navy.

The project 20360M maritime armament transport was developed by the Vympel Design Bureau (Nizhny Novgorod) on the basis of the Dubnyak project 20360, taking into account the requirements of the Ministry of Defense. The vessel has an ice-reinforced hull, double bottom and double sides, two cargo holds, a platform for transporting cargo in containers, a crane with a lifting capacity of 20 tons and a bow helicopter landing platform. There is a bow thruster.

The second transport of this project for the Baltic Fleet, Vladimir Pyalov, was laid down on March 15, 2018 at the Nobel Brothers Shipyard in Rybinsk.
Ctrl Enter
Noticed oshЫbku Highlight text and press. Ctrl + Enter
We are
The Ministry of Defense announced the launching of a maritime transport of weapons of the project 20360MSea transportation of weapons to be laid in Rybinsk
Military Reviewin Yandex News
Military Reviewin Google News
56 comments
Ad