The author of The Drive magazine Tyler Rogoway believes that the PRC's desire to create stealth helicopters looks quite natural in the general context of the development of stealth technologies in the Middle Kingdom. Not so long ago, it became known about the development of a stealth helicopter model, which is being carried out by the Chinese Institute for Helicopter Research and Development, a subsidiary of the Chinese aviation corporation (AVIC).


Having studied the photos of the model that got to the press, Tyler Rogoway concludes that the shown helicopter is, apparently, a version of the adaptation of the Chinese Z-20 medium-duty helicopter, which in the United States is considered a clone of the H-60 ​​Black Hawk helicopter.

History creation of the Z-20 helicopter is unique in itself. In the 1980s, when the Cold War was still going on and the United States viewed China as a tactical ally against the USSR, including in the confrontation in Afghanistan, a number of American weapons were exported to the Celestial Empire. However, after the events in Tiananmen Square in 1989, the export of military equipment from the United States to China stopped. But American helicopters were taken as the basis for creating a multi-functional platform for the People's Liberation Army of China.

In fact, attempts to modify the H-60 ​​Black Hawk into a stealth helicopter are not unique. Stealth helicopters are also being developed in the United States. According to Rogoway, the US stealth hawks became famous for their participation in the 2011 raid to assassinate Osama bin Laden. 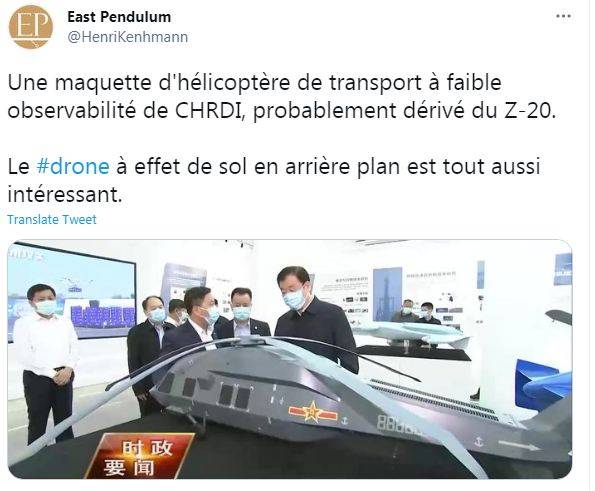 As for the Chinese developments, even earlier, the American observer writes, there were signs that Beijing was working on the design of stealthy helicopters. But there have been more rumors about the development of stealth helicopters than true information. It would seem that China will have to make up a lot before releasing an unobtrusive copy of the Z-20. But the capabilities of the Celestial Empire should not be underestimated.

Tyler Rogoway believes that Chinese developments are quite real, and here's why. First, China, according to the observer, has long been engaged in industrial espionage, stealing new technologies from the United States. Over the past decades, Chinese intelligence agencies have managed to ferret out a huge amount of secrets of the American aerospace industry.

Second, the Chinese are rethinking the experience of using the Black Hawks in Operation Neptune's Spear in 2011. One of the helicopters lost its tail section. The Pakistani military covered the wreckage of the helicopter with a cloth and then secretly removed it from the scene. But it was too late: reporters were able to get photographs showing the previously hidden US stealth helicopter technology. Two weeks later, the United States still forced Pakistan to return the wreckage of the helicopter. But those days that the tail was at the disposal of the Pakistani military might well have been enough to familiarize the Chinese engineers with it.

According to Tyler Rogoway, thanks to the tail of the American helicopter, China has gained extensive knowledge in the field of materials science, production methods, and helicopter configuration. In the hands of Beijing was a lot of highly classified know-how to create a copy of the Black Hawk. The loss of the tail has increased China's knowledge base on stealth helicopters by at least a decade, the columnist points out.

Naturally, China simply could not help but take advantage of such a chance. As a result, a conceptual model appeared, reminiscent of an American helicopter, but with some innovations. According to Rogoway, the Chinese modification of the Z-20 helicopter in question has a trapezoidal airframe, and the exhaust appears to be directed into an enlarged tail boom and out of the upper ventilation system to minimize the infrared signature.

The tail of the helicopter looks less convoluted than that of the American Stealth Hawk. Rogoway believes that this may be due to the desire of the Chinese to reduce the radar signature. There is no doubt, the American observer stresses, that China will still implement the concept of a stealth helicopter, given the scale of investments that the PRC leadership is making in the development of the aerospace industry.