What awaits the Russian military equipment of the future 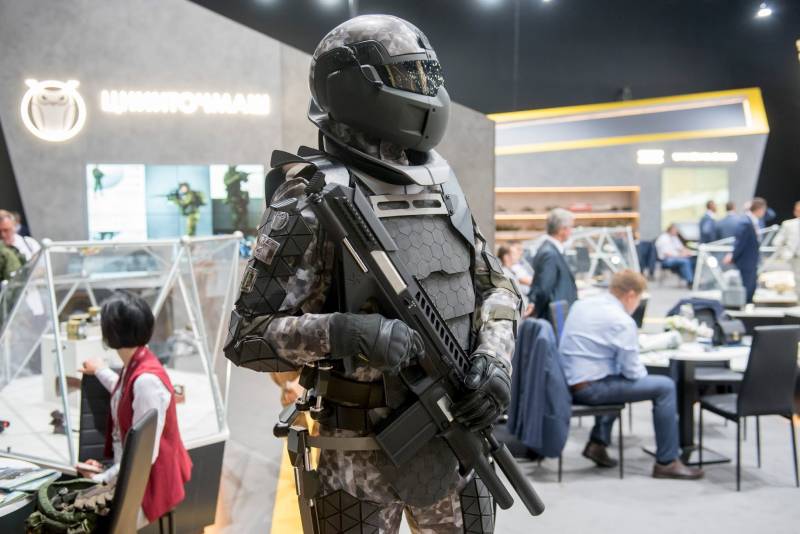 The equipment of the soldier of the future has been developed over the past few decades in many countries of the world. In the USSR, similar developments began in the late 1980s, during the years of the war in Afghanistan. Already in Russia, several sets of combat equipment were brought to a serial state, the most famous and popular of which is the "Ratnik". As of the end of 2020, about 300 thousand sets of this equipment have already been delivered to the Russian army.

In Russia, work began on the fourth generation of combat equipment

Russian military equipment, also known as the "kit of the soldier of the future", is represented by two generations.

The first generation is the Barmitsa set. This set of equipment was developed specifically for motorized rifle troops, airborne troops and special forces, but it never became widespread.

The second generation in Russia includes the "Ratnik" kit, which has been supplied to the troops in large quantities in recent years.

The third generation of modern Russian military equipment is known under the name "Sotnik".

According to the press service of the state corporation "Rostec", the set of combat equipment "Sotnik" should be replaced by "Ratnik" in 2025. According to the director of Rostec, Sergei Chemezov, the best high-tech developments of domestic defense industry enterprises, including those that are part of Rostec, will be integrated into the third-generation equipment set.

Despite the fact that the country is in full swing the process of creating and testing the third generation of equipment for the soldier of the future, scientists, military and engineers are already thinking about the fourth generation kit.

At the end of January 2021, the press service of the state corporation announced that Rostec had begun research work on the creation of fourth generation combat equipment for the soldier of the future. Rostec structures - TSNIITOCHMSh and the Kalashnikov concern, as well as a number of other companies - have already been involved in the research.

While the work is at the initial stage, the process of determining the tactical and technical requirements is underway. Russian developers are currently analyzing the advanced combat kits of military personnel from around the world. At the same time, it is known that research work on the program for the development of fourth generation combat equipment is scheduled until 2035. The fourth generation equipment will have to replace the "Sotnik".

The main purpose of any set of equipment for a soldier of the future of any country in the world is to increase the combat effectiveness not only of a single soldier, but of the entire detachment. In Russia, these tasks are fully met by the second generation "Ratnik" set of equipment, which combines about 60 different elements: from small arms weapons to tactical flashlights and from body armor to communications and target designation. 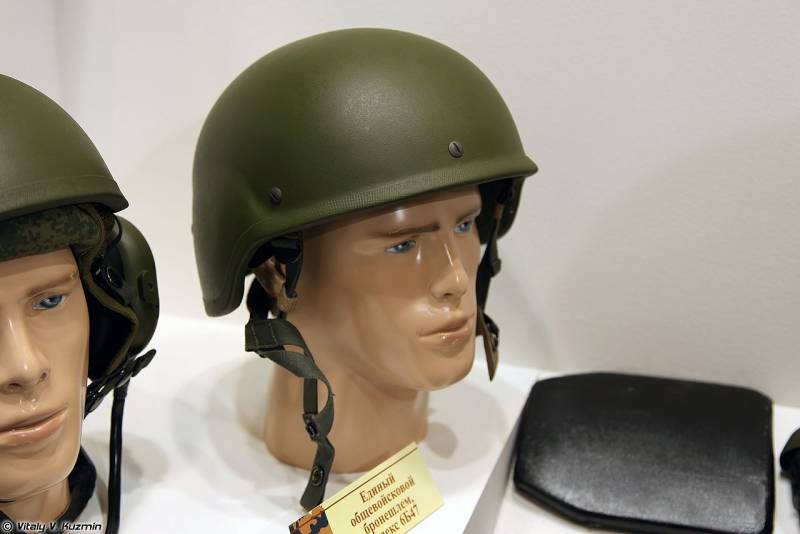 The second generation equipment includes 6B47 combined arms armor helmet and 6B45 combined arms body armor. The helmet is able to protect the fighter from the PM pistol bullets fired from a distance of only 5 meters, as well as fragments flying at a speed of no more than 630 m / s. The bulletproof vest can withstand the hit of automatic 7,62-mm AK ammunition and the M16A2 assault rifle, as well as SVD sniper bullets (cartridge 57-N-323C) at a distance of 10 meters.

At the same time, an assault version of body armor with an additional level of protection 6B45-1, a special protective apron and splinter-proof shoulder pads is also available to servicemen. This version of the body armor already holds 7,62-mm bullets of armor-piercing incendiary cartridges at a distance of 10 meters, as well as fairly powerful sniper cartridges, for example, the popular American .338 Lapua Magnum (8,6x70 mm) from a distance of 300 meters. The weight of the "Warrior" consumable set with assault body armor without weapons and ammunition reaches 22 kg.

According to Chemezov, the weight of the Sotnik set will be about 20 kg. At the same time, Sergei Chemezov did not disclose any information about which body armor the given weight is given for, and whether the fighter's weapons are included in this value. At the same time, according to the head of Rostec, the combination of functions of individual elements and the use of innovative materials will reduce the weight of the kit by 20 percent.

The standard second-generation body armor is based on ceramic-composite armor plates, which are distinguished by a high level of strength with a relatively low weight. In the basic version of the "Warrior", a bulletproof vest capable of withstanding up to 10 hits of automatic bullets weighs about 7,8 kg, in an assault configuration the weight increases to 15 kg. 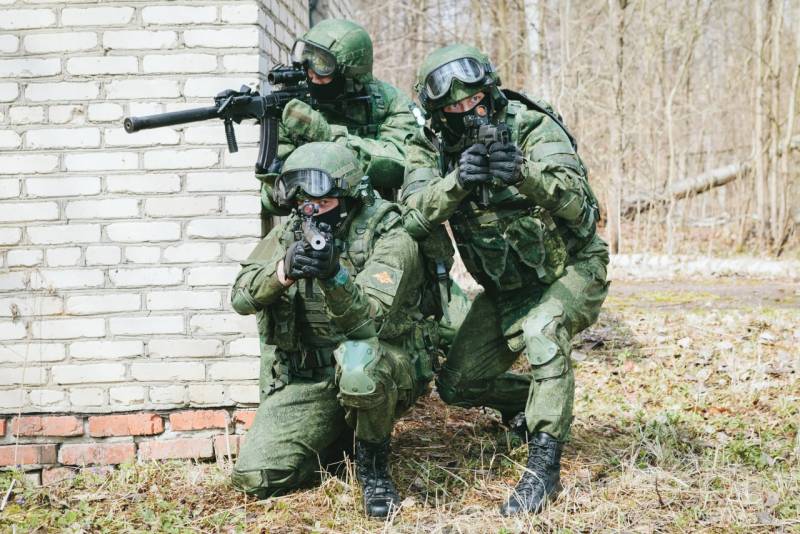 Soldiers in "Warrior" outfit
In the third generation soldier's outfit, special polyethylene fiber can replace the ceramic-composite armor. Lightweight polymer fiber and armor plates can increase the fighter's protection. The developers of the new armor, which became known as the "super thread", claimed that it outperformed similar Israeli and American designs.

The use of new armor, on the one hand, will help to lighten the set of equipment, on the other hand, to increase the protection class. It is reported that such armor will be able to cope with shrapnel flying at speeds up to 670 m / s, and will also help prevent fractures and contusions in the fighter. In the future, the appearance of armor that can withstand the impact of 12,7 mm bullets is possible. Including the M2 Browning heavy machine gun, which is widespread in the world.

Theoretically, such armor can be created with ordinary ceramic plates, however, moving with such protection will be extremely problematic. In any case, a certain margin of safety is already being laid in the Sotnik outfit set. It is known that this kit will receive a passive exoskeleton. Rostec reports that it has already been tested in real combat conditions and has managed to confirm its effectiveness.

The lightweight exoskeleton is made of carbon fiber and is able to effectively relieve the musculoskeletal system of a fighter, making it easier to carry loads weighing up to 50 kg (special equipment, raider backpacks, weapons and ammunition). Such a device is simply irreplaceable when conducting long marches (especially over rough terrain) or assault operations. 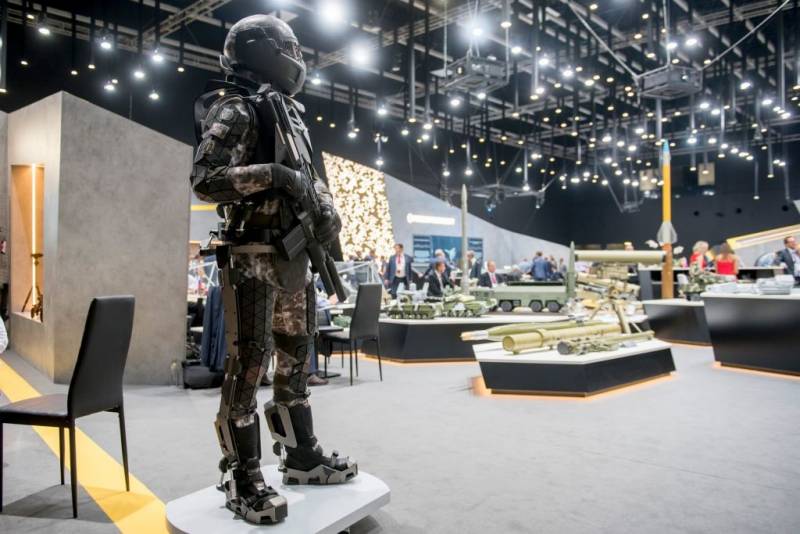 Possible appearance of combat equipment of the third generation "Sotnik"
Externally, a passive exoskeleton is a mechanical lever-hinge device that mimics human joints. Such an exoskeleton is called passive, since it does not have servos, power supplies and various electronics and sensors in its design. This makes the design simpler, more reliable and lighter. The passive exoskeleton is easy to operate and completely autonomous, while the weight of the kit should not exceed 4–8 kg.

Obviously, without waiting for the 2030s, we can say that a promising Russian set of fourth-generation equipment will receive an active exoskeleton with servo drives and batteries. The weight and complexity of the device will increase, but the capabilities of the fighter will increase proportionally. At the same time, like any exoskeleton, it can be used not only on the battlefield, but also in the rear. For example, during construction work, repair and maintenance of military equipment, etc.

Drones will also be included in the fourth generation equipment set. In this case, we are talking about devices of small and ultra-small classes, differing in miniature dimensions. It is unlikely that they will be larger than the palm of an average person, and their weight, most likely, will not exceed the weight of an ordinary grenade under-barrel grenade launcher.

The miniature size of the devices will allow each soldier to be equipped with them, which will significantly improve their situational awareness in a combat situation. Such devices will receive electric motors and the ability to stay in the air for about 1–2 hours. Their main advantage should be mobility and speed of deployment. At the same time, it is almost impossible to detect such drones, as well as to hit with conventional weapons systems. 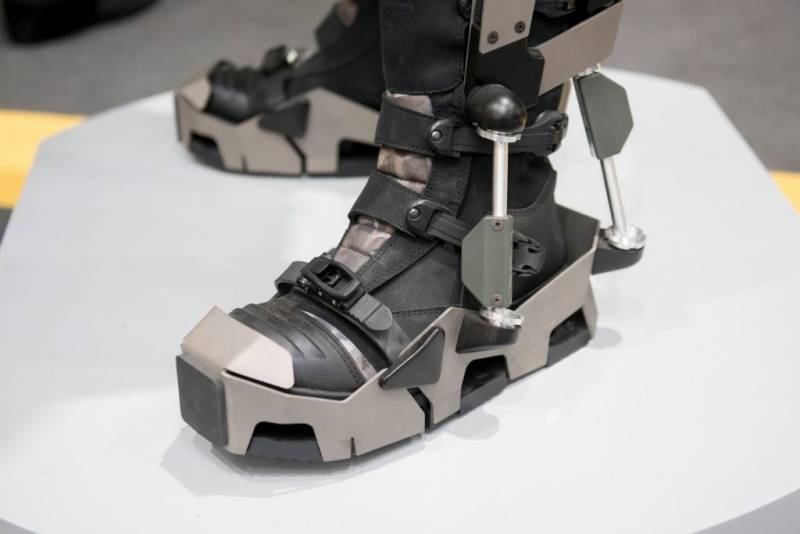 Elements of a passive exoskeleton in the "Centurion" outfit
Perhaps the drones will be included in the Sotnik outfit. At least at the end of 2020, information appeared that a third-generation nano-UAV was created in St. Petersburg. The weight of the miniature UAV was only 180 grams. In the future, fighters will even be able to use a swarm of such devices.

The future is also drawing closer to other inventions that are planned to be implemented and used already in the outfit of the Sotnik. In particular, Rostec reported that the Sotnik plans to use a unique electrically controlled material “chameleon”, for the creation of which specialists of the Ruselectronics holding are responsible. It is reported that this material will be able to independently change its color depending on the environment surrounding the soldier and the masked surface. For the first time, a helmet equipped with such a coating was shown during the Army-2018 forum.

Futuristic technologies include a special "anti-heat" suit that hides soldiers from infrared observation devices of the enemy, special "mine" boots and a set of sensors - a module for assessing the physical condition of a soldier. The latter must transmit to the commander all information about the state of subordinates: pressure, heart rate, pulse, breathing. Information about the received wound will be automatically transmitted to the commander and military medics.

Deliveries of "Sotnik" to the troops are scheduled for 2025. We have four more years at our disposal to assess which of the declared will be implemented now, and which will be postponed until the appearance of the fourth generation combat equipment. At the same time, by 2035 we will definitely witness the emergence of some more unique technological solutions.