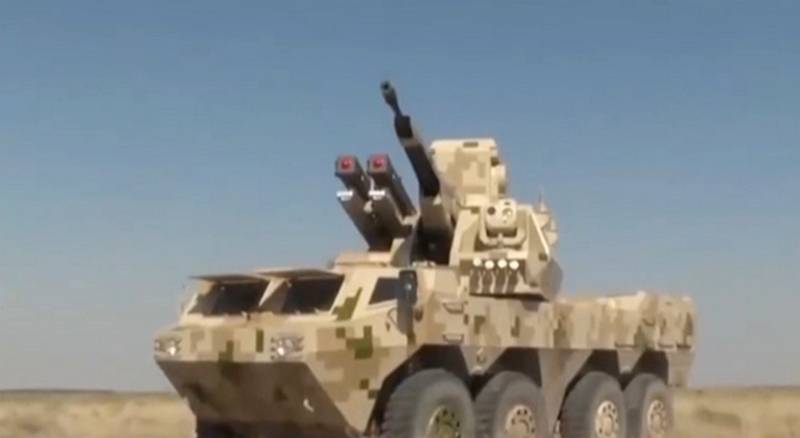 China Central Television (CCTV) recently demonstrated a new type of self-propelled 35mm anti-aircraft system, located on an eight-wheeled chassis and equipped with a cannon and two surface-to-air missiles. The combat "stuffing" of the system makes it similar to the Pantsir-S air defense missile system, which allows us to consider it as a kind of China's response to a Russian product. Chinese analysts noted that this is an excellent choice for providing field anti-aircraft cover for troops.

The new product is equipped with advanced radar and fire control systems and can act as an autonomous combat unit, which makes it a high-class product among other anti-aircraft guns.
- noted on the CCTV channel, without disclosing the designation of the new air defense system.

As stated, it is highly mobile and can accompany mechanized troops for their anti-aircraft cover, which allows it to provide effective protection for the combined-arms brigade, including from the effects of drones.

At the same time, the Chinese "analogue" of the Russian "Pantsir-S" uses a single-barreled cannon, which has the same combat power as its double-barreled predecessors, since the new gun is equipped with a completely new automatic loader, which significantly increases its rate of fire.

Rotary [drum] loading mechanism, which also improves accuracy and reliability weapons, was difficult to develop due to high requirements for construction and material
- explained the source of CCTV, noting that the Chinese defense industry has successfully solved all the problems that arose during its creation.

According to military expert Wei Dongsu, in comparison with self-propelled anti-aircraft guns using tracked vehicles, wheeled vehicles have higher mobility and range, are more difficult to detect and have a better chance of attacking from the air. According to him, the new product is capable of working on ground targets.

Ctrl Enter
Noticed oshЫbku Highlight text and press. Ctrl + Enter
We are
Reports from the militia of New Russia for 27-28 September 2014 of the yearDecember 2010 years. Russian March. Senseless and merciless? Notes not a Russian person
Military Reviewin Yandex News
Military Reviewin Google News
51 comment
Information
Dear reader, to leave comments on the publication, you must sign in.