The beginning of the submarine war in the Baltic

The small submarine M-35 is of the same type as the M-94, which was lost in the early days of the war. Submarines of the "Malyutka" type suffered especially tangible losses in the submarine war in the Baltic

The submarine war in the Baltic Sea began from the very first days of Hitler's invasion of the USSR. Even before the start of the war, several German submarines took up their initial positions on the approaches to the Soviet naval bases and at the entrance to the Gulf of Finland. Their tasks were to block the actions of Soviet surface and submarine forces in designated areas by laying minefields on the approaches to bases and in gorges, as well as torpedo attacks on Soviet ships and vessels. The mines delivered by German submarines were mainly equipped with magnetic fuses, which turned out to be a very unexpected problem for the Soviet side, since the Baltic Fleet did not have a sufficient number of magnetic trawls. The torpedo attacks did not bring any particular success to the Germans, but two of them ended tragically for the Soviet ships.

At the beginning of the war, the Red Banner Baltic Fleet had 65 submarines in its composition, but only 47 of them were ready to fight. The rest were under repair or in reserve. The submarines were divided into three brigades, of which the 1st and 2nd were part of the submarine detachment, and the 3rd remained training. The first brigade, under the command of Captain 1st Rank Nikolai Egypko, was based initially in the Baltic ports - in Liepaja, Ventspils and Ust-Dvinsk, and then in the area of ​​the Moonsund Islands with the main base in Triigi (Triga) Bay in the north of Saaremaa. The ships of the 1st brigade were to operate in the area south of parallel 56 ° 55 ', passing along the southern tip of the island of Gotland - Sundre Hoburgen. To the north of this line was the area of ​​operations of the 2nd brigade (captain of the second rank Alexander Oryol), based in Tallinn and Paldiski.

The ships of both brigades had the task of attacking warships and convoys of enemy ships in their areas of operation and transmitting reports on all movements fleet enemy. The fight against caravans was, of course, possible on the German routes of communication, which passed mainly off the eastern coast of Sweden, in the area of ​​the Aland Islands and in the waters of the southern Baltic between Memel and Kiel. Later, already during the war, the Germans organized new routes of communication along the eastern shores of the Baltic Sea, from Liepaja to Riga, and eventually extended to Tallinn and Helsinki. The tasks of destroying enemy ships, primarily battleships and cruisers, could be performed in their basing areas or off the Soviet coast, for example, during shelling of ports or ground forces. Therefore, the Soviet command deployed part of the submarine forces on German communications, and part in the ports of the Baltic States, mainly in Liepaja and Ventspils.

Submarine Shch-307, which opened an account for enemy ships sunk in the Baltic Sea
On the whole, the deployment of the submarine forces went well. During the first two days of the war, Soviet submarines took up combat positions along the Soviet coast, and by June 25 along the coast of Sweden, in the area of ​​Bornholm Island and on the waters of the Danzig Bay. In addition, after Finland joined the war, two submarines from Kronstadt took up positions in the central part of the Gulf of Finland. In deploying these forces, the main danger came from mines placed by German ships and aircraft on the eve of the invasion. Already on June 23 in the Irbensky Strait, mines blew up M-80... This was the first loss of the submarine fleet and a serious alarm signal of mine danger, but it did not introduce any hindrances in the course of the deployment of the submarine forces.

Soviet submarines as a whole quickly took up their combat positions and began to carry out combat service, but they had to wait for a long time for success. There are several reasons for this.

Firstly, the very first days of the war clearly showed that the choice of combat positions was far from being made in the best way. Off the coast of the Baltic, where the appearance of German battleships and cruisers was expected, the sea was empty. No large surface units appeared on these waters, but the depths were teeming with German submarines and the mines they placed. True, relatively small submarine forces were deployed in the coastal zone, but nevertheless they weakened the grouping operating on communications. There were too few forces left to conduct effective operations in the south of the Baltic, and the western Baltic was, in general, outside the zone of operations of the Soviet fleet. True, due to the relatively shallow depth, these waters were not very suitable for conducting submarine warfare, but sending at least some forces to the area between Bornholm, the island of Rügen and southern Sweden was possible and expedient, since most of the German sea routes were concentrated there. ... 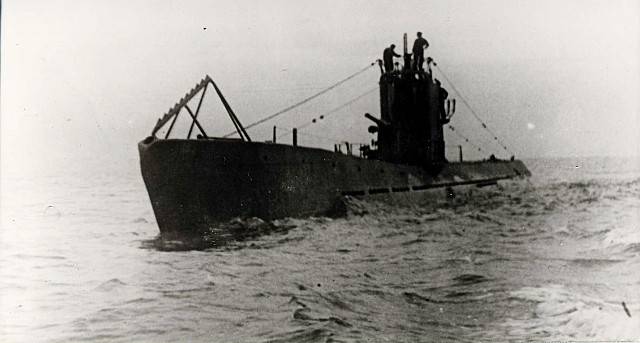 Medium submarine of the type C-11, lost in the Soel Strait
In addition, the first days of the war revealed many significant shortcomings in the organization of the submarine fleet and its operations. First of all, the submarines patrolling their combat sectors did not have sufficient information about the movements of the German caravans. The submarines themselves had to organize reconnaissance, relying on chance and often missing either convenient positions for an attack, or the very possibility of an attack. Although aerial reconnaissance was organized in the skies over the Baltic Sea, it was limited to coastal zones. And the Soviet scouts did not fly into the areas through which the German communications passed.

Special aerial reconnaissance in the interests of the submarine forces was generally absent as such, which negatively affected the results of their use against enemy shipping. Communication with the ships on the high seas worked absolutely badly. There were very few units equipped with equipment for receiving and transmitting radio signals in a submerged position. Radio messages, often containing important data on the movements of the German fleet, usually had to be transmitted at night, on the surface, while the batteries were being charged. But even at night, messages did not always reach their destination, since they were transmitted at a precisely defined time, and submarines could not always surface at that time.

Further, from the first days of the war, shortcomings in the tactics of conducting submarine warfare appeared, which did not contribute to high performance. The submarines were assigned sectors, strictly limited by geographic coordinates, in which they had to stay awaiting the appearance of German ships. This was a purely passive tactic, inapplicable for waging a war on communications, which involves searching for enemy caravans and following them for a long time to choose a convenient position for an attack. Also vicious was the practice of using only single torpedoes for an attack - which followed from a misunderstanding of saving expensive weapons with its low probability of hitting the target. In addition, ships or ships did not always sink after a single torpedo, and repeating an attack was usually difficult or impossible due to the presence of escort ships. 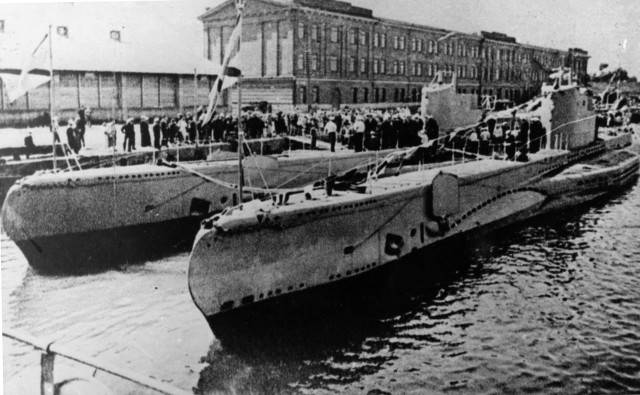 Underwater minelayers "Kalev" and "Lembit" were included in the Baltic Fleet when Estonia became part of the USSR
Most of the organizational and tactical mistakes and shortcomings manifested themselves in the very first weeks of the war. The commanders of submarines returning from missions talked and wrote about them, often proposing solutions to problems. Thanks to this, many shortcomings were eliminated already in July; the rest of the problems were solved as they were understood and the necessary information and funds were collected.

In July, the patrol system was changed and more forces were allocated for operations on enemy communications. Air reconnaissance was gradually improving in the interests of the submarine forces. The organization of communication with ships at sea has changed - now at night radio messages were transmitted repeatedly at regular intervals. The fleet demanded more communications. All these decisions were needed and were gradually implemented, but not only they influenced the effectiveness of the actions of Soviet submarines. There were also factors independent of the will of the Soviet command.

In the first weeks of the war, Soviet submarines did not have great opportunities to sink any significant number of ships or ships due to the fact that the German command had previously limited navigation on the most important Baltic routes, which, undoubtedly, was dictated by fears of the Soviet submarine forces. On the one hand, thanks to this, the German fleet did not suffer significant losses, but, on the other hand, the German economy suffered losses. The economic losses resulting from the reduction in freight traffic are difficult to calculate, but it seems that they should have been significant, insofar as before the war Sweden supplied Germany by sea up to 2 million tons of iron ore a month. So, paradoxically, by its very existence alone, the Soviet submarine fleet achieved significant success in the form of limiting these supplies. 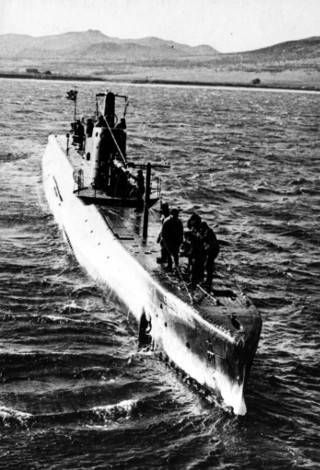 Submarine L-3, the most productive in 1941.
But to restrict, of course, does not mean to completely interrupt. The German command could not afford this, but, using the experience of the battle for the Atlantic Ocean, from the first days of the attack on the USSR, organized a system of convoys in the Baltic. In the southern and eastern waters of the Baltic Sea, caravans were formed, mostly small, consisting of 2-3 ships, but with strong escorts. As a rule, a caravan escort consisted of 4–5 ships of different types, and ships with valuable cargo could be accompanied by 8–9 ships. And this despite the fact that in Atlantic convoys the proportions between the number of escort ships and transport ships were exactly opposite, because there one escort ship accounted for an average of 8 transport ships.

In the Baltic Sea, the Germans provided the caravans with not only very strong escort, but also cover from the air and from the coast. In addition, they made full use of the opportunity to conduct caravans in small coastal areas inaccessible to submarines. The Germans tried to pass the most dangerous sections of the route at night, the probability of detection by submarines was the lowest; off the coast of Sweden, the Germans repeatedly violated Swedish territorial waters, thus avoiding attacks from Soviet submarines. All this also negatively affected the effectiveness of the Soviet submarine forces.

It is worth mentioning another factor especially characteristic of Soviet submariners - their courage, self-sacrifice, discipline, skill and crew rallying. These qualities of Soviet sailors helped them force minefields, attack in difficult conditions, and often escape in critical situations. Alas, this was the downside of the lack of combat experience in most commanders and rank-and-file personnel. Experience had to be gained in the course of hostilities and often paid the highest price for it. 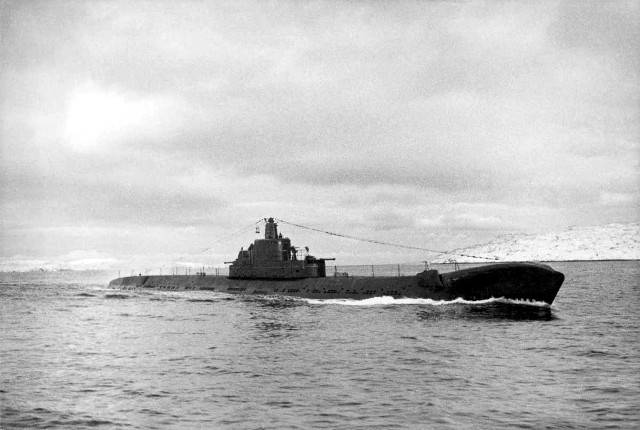 Ctrl Enter
Noticed oshЫbku Highlight text and press. Ctrl + Enter
We are
Diplomats of the People's Commissariat of Defense: on the eve and during the warRusso-Japanese War 1904-1905's. State of the Russian fleet. Bad luck and missed opportunities
Military Reviewin Yandex News
Military Reviewin Google News
37 comments
Information
Dear reader, to leave comments on the publication, you must sign in.