Make with the kids: homemade products for the summer ...

and asked the little one:
- What
good
and that such
badly?"
(Vladimir Mayakovsky "What is good and what is bad")
Creativity is around us. The readers of VO liked the previous material on this topic. They wanted to continue and here it is. Straight to summer. To have something to do with children and for children. And let's remember again: no matter how the father talks about his work and the money he earned, the child is unable to appreciate all this. On the other hand, the child will appreciate that even if dad came home from work and “he was tired,” he nevertheless didn’t sit down to watch TV with beer, but did something interesting with him. Appreciate if they built something flying, floating or crawling together. If, having gone to rest on the sea, dad and mom again did not send their child to "play in the sand", but ... helped him to "play in the sand", built together with him a wonderful knight's castle - and not one, but two, and then arranged " the war of the fortresses ”and together they shot them from a homemade catapult. Well, if, together with dad, before the pre-planned trip to the sea on the sand, an original, unlike anything, homemade product was also made, then this will be the best gift of fate for the child. He will never forget this to his father, as, incidentally, to his grandfather too ...

But what are we going to do with you today? Again, everything is the simplest and most accessible, although outwardly very interesting, beautiful and entertaining. We stand on that. And, of course, we use all kinds of household waste: packaging, boxes, in a word - we increase the environmental friendliness of our creativity.

So, perhaps the best place to start is with sand toys. Children love to play with these, but most of them are commonplace. And if so, then all the more it is worth taking care of your own child, so that he has something to develop his brains on.

Now everyone is talking about flying to Mars, even young children now know about it, so why not make your little son a toy wheelchair (that is, without an engine and gearbox!) - the Mars rover "Martian". We will need a plastic box, half a plastic ball from a New Year's toy for the astronaut's cabin, two metal knitting needles for knitting - axes, four corks from the crust from large bottles and many, many thin metal knitting needles for knitting. It is from them that we make "wheels" according to the pattern, which are surprisingly very good on the sand. However, the paws of the crab are also pointed, but for some reason it perfectly moves on it. So here's an example of the correct use of one of the "patents of nature." By the way, he is well versed and takes up negligible space in a suitcase when disassembled. 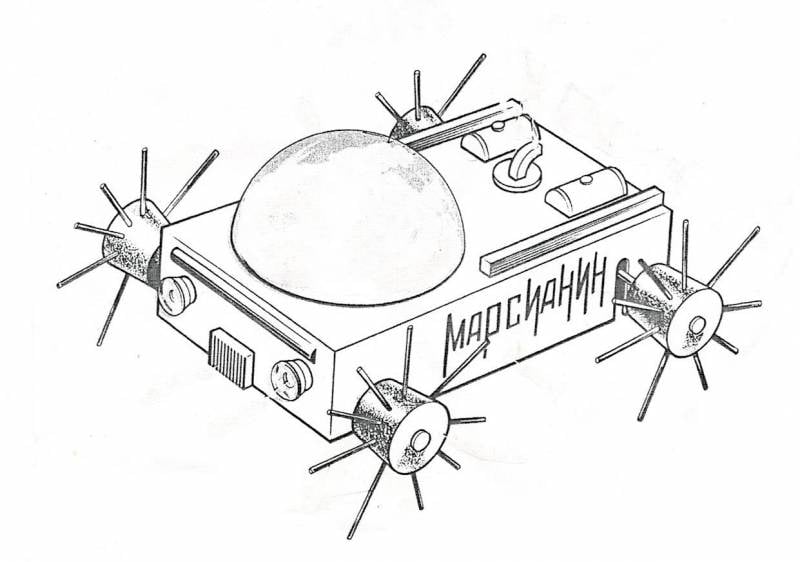 "Mars rover" Martian "
The second homemade product has a similar design and only part 2 (4 of them are needed) requires rather painstaking work from an adult. This is a spring rover. Also collapsible. Only instead of wheels it has springs bent in the form of a chamomile petal. Since this homemade product was made in Soviet times, the figure shows how you can also make springs for it yourself. This is not necessary now. Springs of any length and diameter can be purchased. But part 2 will have to be made from duralumin yourself for the springs you have, which should be put on it tightly enough and hold well, not fall off. But this homemade product is very easy and quick to understand. 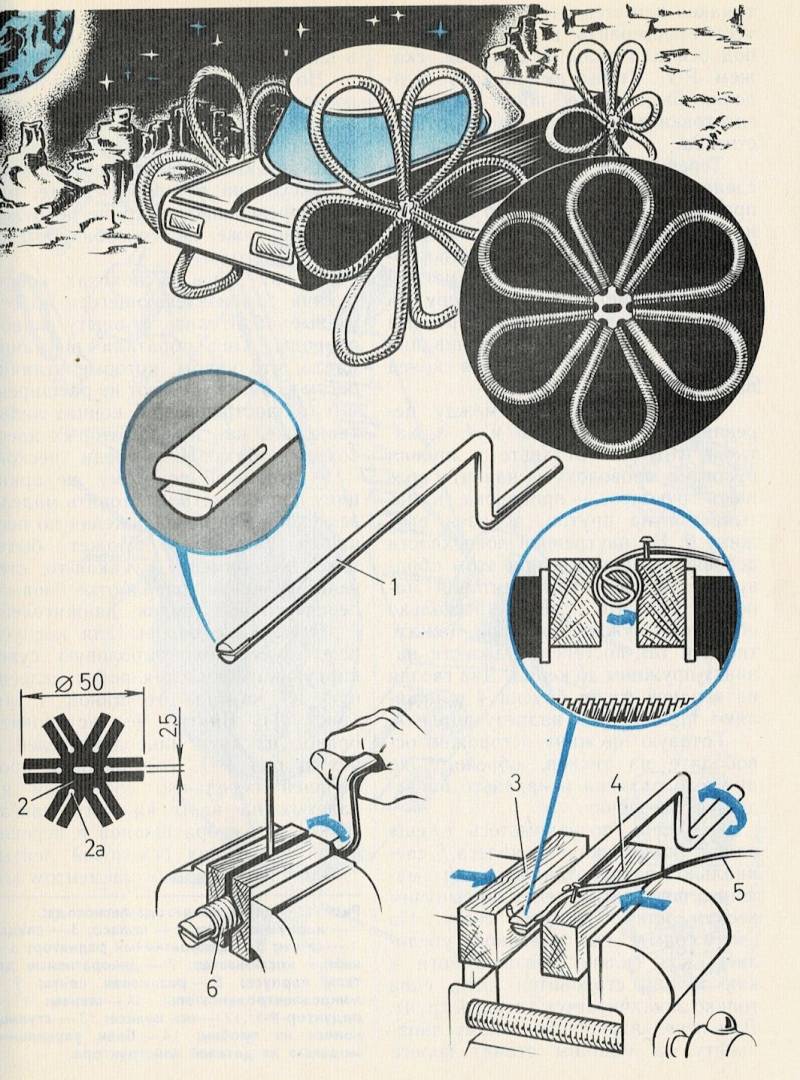 All-terrain vehicle-spring vehicle
But this homemade product, also a rover for Mars, where very strong winds blow, can be made right on the spot with a minimum amount of tools (polystyrene and superglue!) If you use five jars of Yantar cheese or sour cream, polystyrene knitting needles and cones made of thick paper glued with PVA glue. The main thing here is painting! You will need to stock up on silver nitro enamel and carefully paint the entire model so that the paint does not corrode the plastic. In this case, the model turns out to be very beautiful, the windmill on it rotates from the wind, so that it excites interest not only in children, but even in adults. 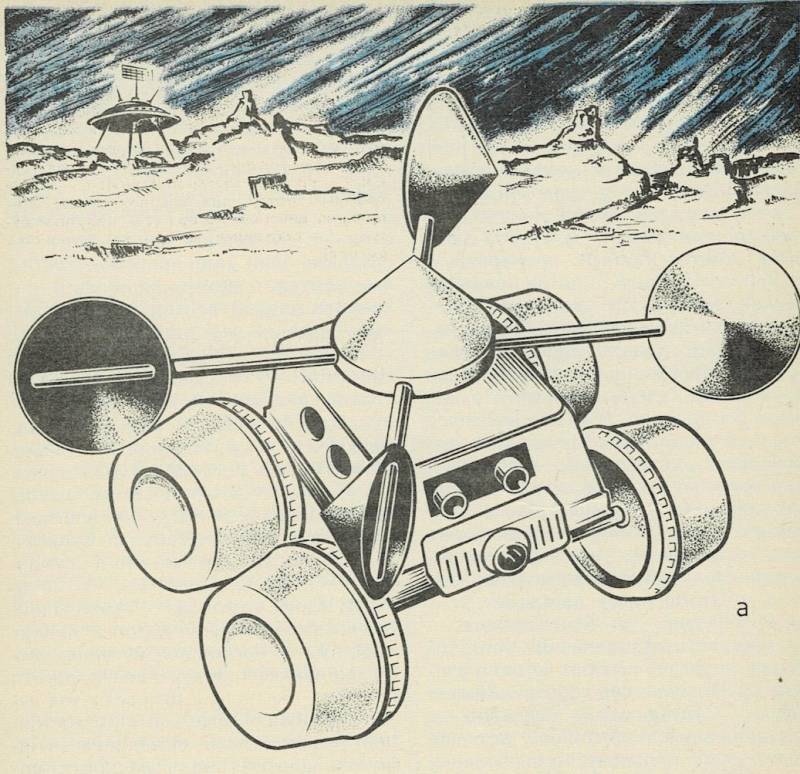 All-terrain vehicle-wind vehicle
Now look at this homemade product. This is a hovercraft that requires a microelectric motor and batteries. But then everything else except for parts 9, 10 and 11 is food packaging! “Skirt” 1 is a film from a garbage bag, and here it is hiding four tennis balls glued to the corners of a polystyrene box from “freezing”. Parts 9, 10, 11 will require labor - they are made of 1,5 mm polystyrene. Well, propellers 8 in fairings 7 (cans of "Yantar" cheese) can be made by yourself, or ... taken from the GDR model of the Tu-114 or Tu-95 aircraft. Well, if someone else has preserved them from those distant, distant times.

Parts 11 are air ducts. They dump excess air from under the hull onto the fake propellers. They begin to rotate, and it seems to everyone that this is why the model is moving. Swivel plugs can be fitted inside them. Their handles are details 12. By turning them at different angles, you can make the model move in a circle, which looks very impressive. Note that it is not worth launching it into the sea. Excitement, even weak, is contraindicated for her, but in the pool she moves perfectly above the water (although she will need to be well differentiated in advance with pieces of plasticine and make a well-functioning propeller to inject air into the body). 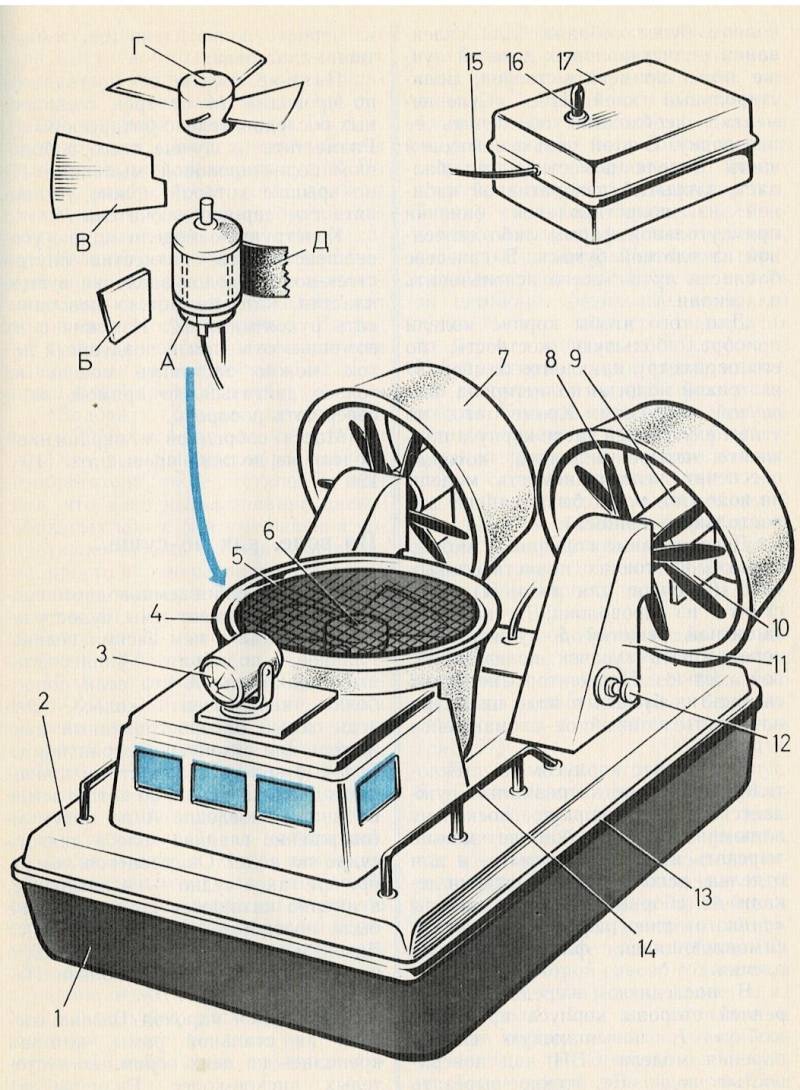 Hovercraft
Now, in our south, windsurfers are no surprise. But the toy windsurfer is still surprising. True, today this toy is quite expensive. The fact is that it was created for a homemade foam plastic figurine on a wire frame. And making it was ... well, very difficult. It's simple now. You can easily buy a figurine of a naked man with movable joints. However, it is not cheap - the 14,5-centimeter one costs 3700 rubles!

Figurine for 3700 rubles
But if you don’t regret this money, all you have to do is recount all sizes for it and make a toy windsurfing from foam. The material is the most accessible - sticks-spatulas for ice cream, skewers for kebabs, film from shopping bags and ... fishing weights as ballast on the keel. Making drop ballast is easy. You need to mold it from plasticine. Then mold into a double-sided plaster mold and cast from lead or tin. The main thing is that your surfer has a low center of gravity and the wind cannot turn him over. The figure itself inside the groove on the deck can move back and forth and even turn in different directions. How this is done is clear from the figure. It is better not to paint the polystyrene, but to paste over the surfer's body with a bright self-adhesive film! 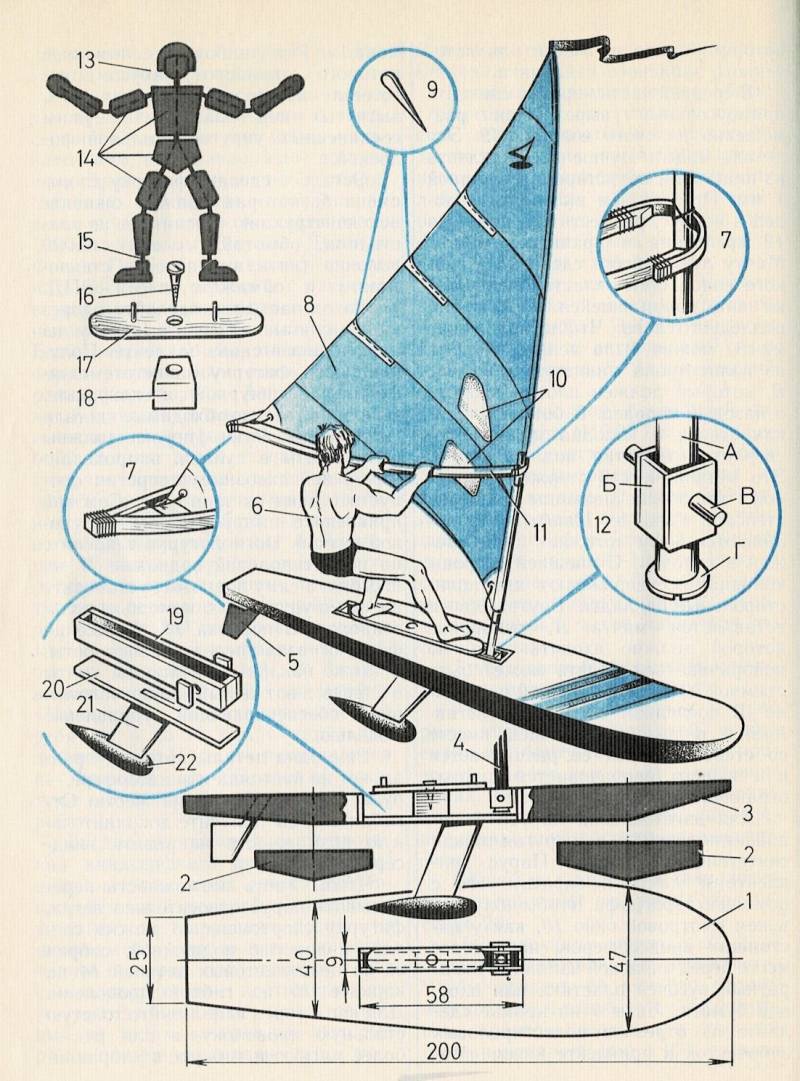 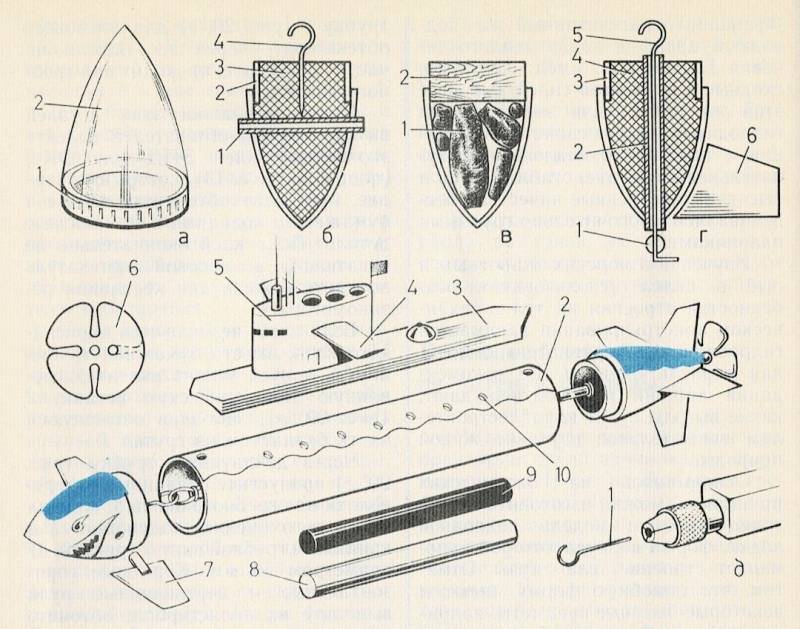 Submarine with rubber motor
What kind of "boats" of this type were not described in the magazines "Young Technician" and "Modelist-Constructor" of the Soviet era. But for the most part, their hulls for some reason needed to be cut out of wood. And modern children do not like to "cut Buratino". Do not like? Well, it is not necessary! We take two needle beds A from polystyrene, roll them out of paper or select a suitable plastic tube and ... here you have a practically finished submarine. We fill the front B and rear fairings of the D hull with epoxy resin or ballast them with fishing weights D. The hull parts, wheelhouse and rudders are all made of thin sheet polystyrene and glued to the hull with superglue. The front and rear fairings must fit firmly into it. Inside there are a rubber motor, a buoyancy block 8 made of foam, ballast 9, after which the model is painted black. It remains to paint a shark's mouth with acrylic paints (whoever likes it and who knows how!) And ... we can go and launch our "nuclear-powered ship" Borei ". 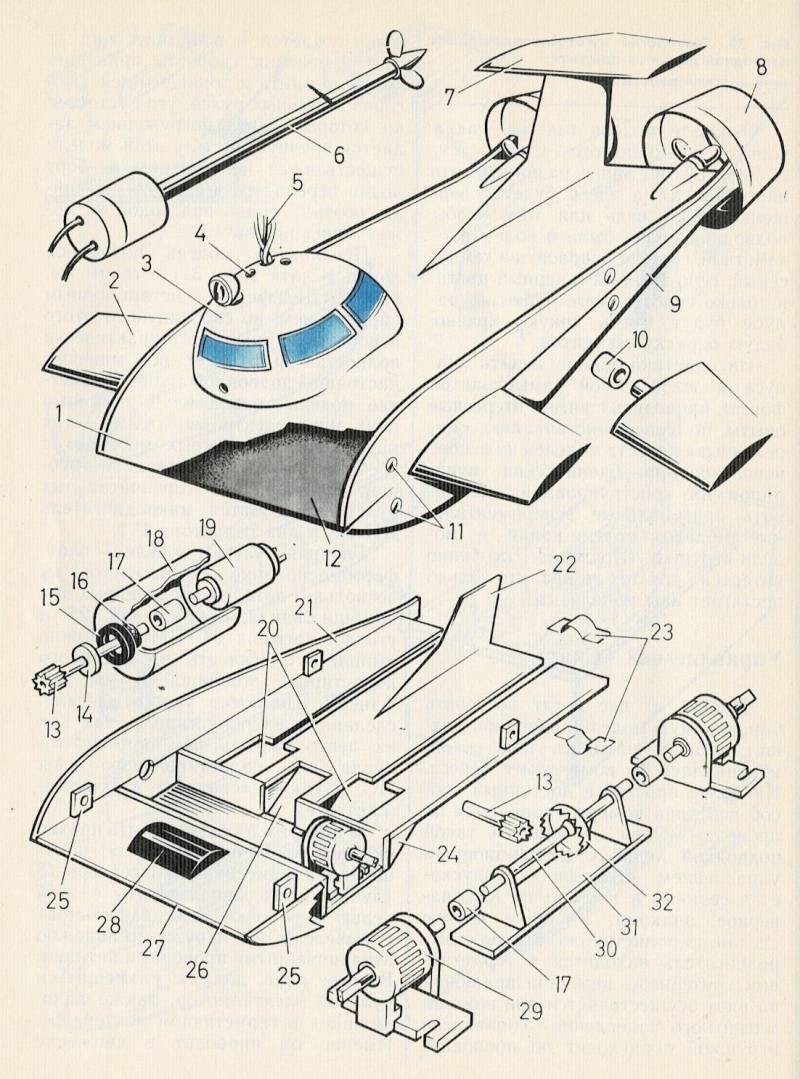 Aquaplane model "Skat"
The underwater aquaplane "Skat" is a homemade product that is rather complicated. And most importantly, it will require fiction. The fact is that it was created in the era of the USSR for DI-1-3 micromotors and R-1 gearboxes, and now you cannot find such a thing with fire during the day. But now there is polystyrene with a thickness of 1,5 mm, from which you can easily cut and glue all the details of the model. In any case, it will require three microelectric motors: two undercarriages, allowing to control the movement of the "Skat" to the left and right, and one motor for driving the horizontal rudders, which are responsible for immersion. The body panels are cut with a hot nichrome thread using the tool shown in our figure. 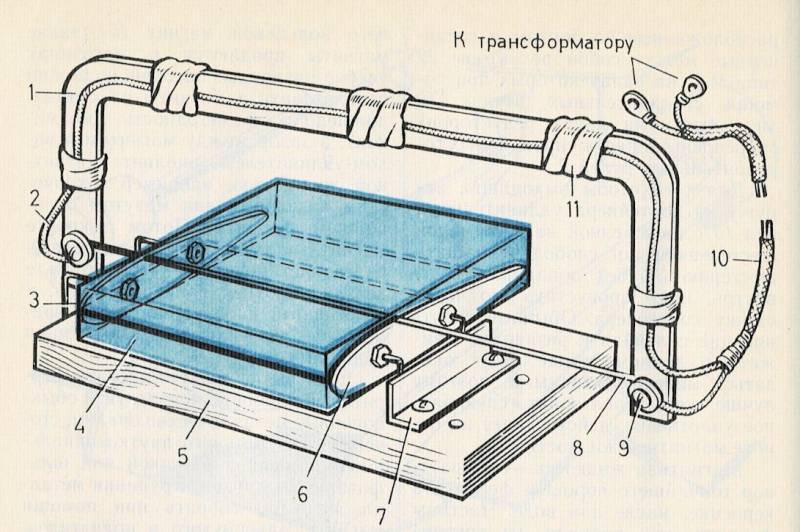 Machine for the production of profiled parts from foam
By the way, today the rudders can be driven by two steering gears. However, in any case, it is necessary to properly seal both the containers for the propulsion motors and the steering motor (or the shafts of the steering gears). This can be done with the help of a magnetic seal using finely dispersed ferrite powder or even ... iron filings, planed with a file or an emery wheel and collected using a magnet placed in a plastic bag.

Sawdust or ferrite powder is mixed with fuel oil or machine oil. This mixture is placed inside an annular magnet 11, which is closed on both sides of the engine container by covers 14 and 16 with holes for the shaft. Water will not pass through such a "magnetic seal". The main thing is that the mixture is very thick. The shafts of the travel motors are sealed in the same way.

The model is lightweight, therefore it needs ballast from shot, filled with epoxy resin. She has power, as well as control - external, via wires. But, despite this, it will be very interesting for your child to play with it. She can submerge and ascend, turn in different directions. Naturally, it should be painted as brightly as possible ... 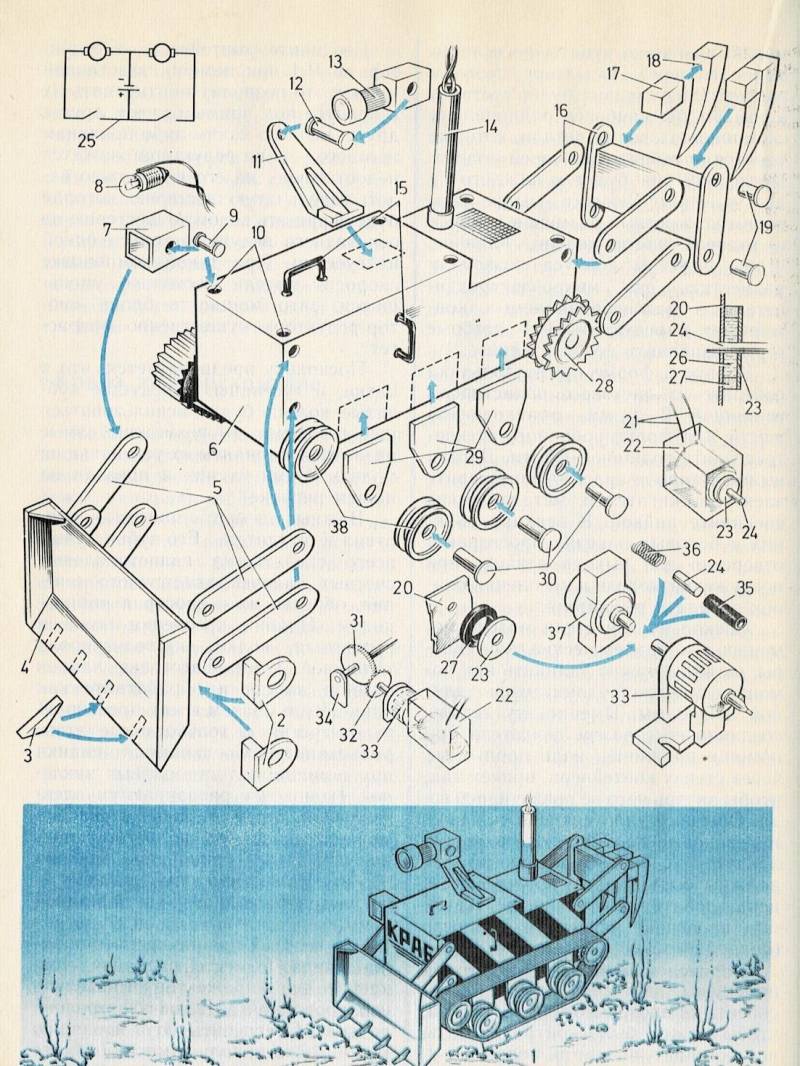 Underwater bulldozer "Crab"
And, finally, the latest model is the coastal bulldozer "Crab", which is also very interesting for a child to play with. Sealing of running microelectromotors in it is also carried out by the magnetic fluid 26, poured inside the space of the ring magnet 27. The chassis can be used from any toy caterpillar all-terrain vehicle. The main thing is that the gears of its reducers are made of plastic.

All parts of the toy are cut out of polystyrene of various thicknesses and glued with polystyrene glue. Axles - polystyrene knitting needles, soldered with an electric burner. Our coastal bulldozer is painted canary yellow with black stripes, but the working teeth and blade will be best tinted with silver enamel to imitate real metal. On the sand of the sea coast, this toy looks just phenomenal, and your child will be happy to play it. Play and ... develop!