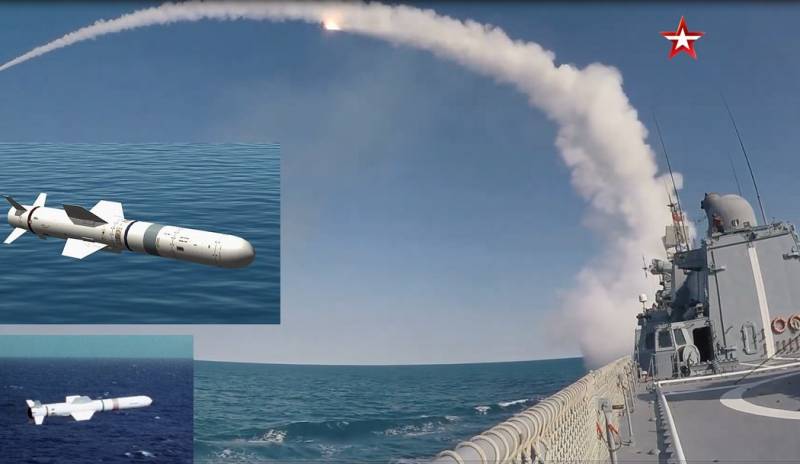 26.05.2021/XNUMX/XNUMX, the official statement of the Ministry of Defense:

The crew of the frigate "Admiral Grigorovich" successfully fired the Shtil anti-aircraft missile system during a joint exercise with the Utyos and Bal anti-ship missile systems ... during which more than 10 missile launches were carried out from the ship and coastal complexes.
... the combat crews of coastal missile systems were tasked with searching and, after detecting, firing several Progress and Uranus missiles at a sea target. In turn, the frigate's crew discovered air targets, took them for escort and successfully hit them, ... using the Shtil anti-aircraft missile system.
Video.


Actually news this is very positive, and on a number of issues. 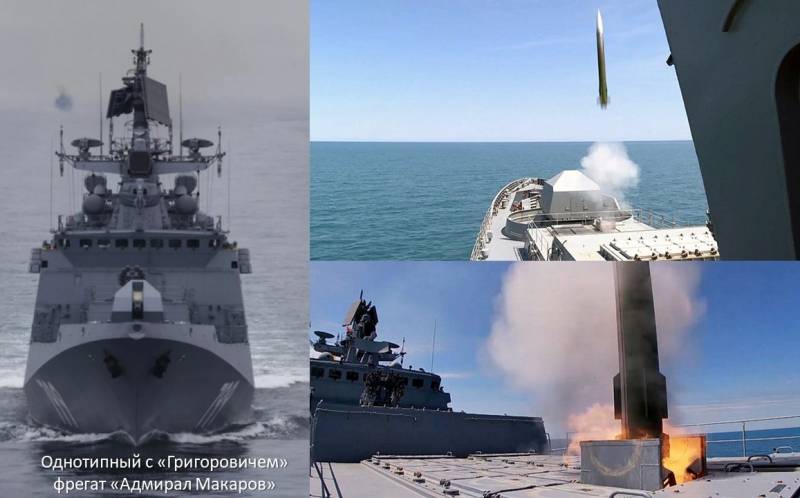 Photo: Russian Ministry of Defense
Previously, anti-aircraft firing of the Navy was conducted at relatively large-size target missiles of the RM-15 type, often at a deliberately high flight altitude (for example, recent shootings of the "Thundering" corvette), that is, absolutely inconsistent with real targets, or, in general, at parachute targets (tests and firing RTOs "Odintsovo").

The discrepancy between the real parameters of targets and target missiles for air defense systems was one of the most critical problems of the air defense of the Navy.

And now the situation has begun to change. Participation in the exercises of the coastal complex "Bal" indicates the use of a small-sized low-flying target PM24 (analogue of the most massive western anti-ship missile system "Harpoon").

A number of details on it were given in the presentation of the Tor-MF air defense system and tests from the Tor-M2KM autonomous combat module (ABM) on the Admiral Grigorovich frigate (in 2018) at the International Maritime Defense Show IMDS-2019. 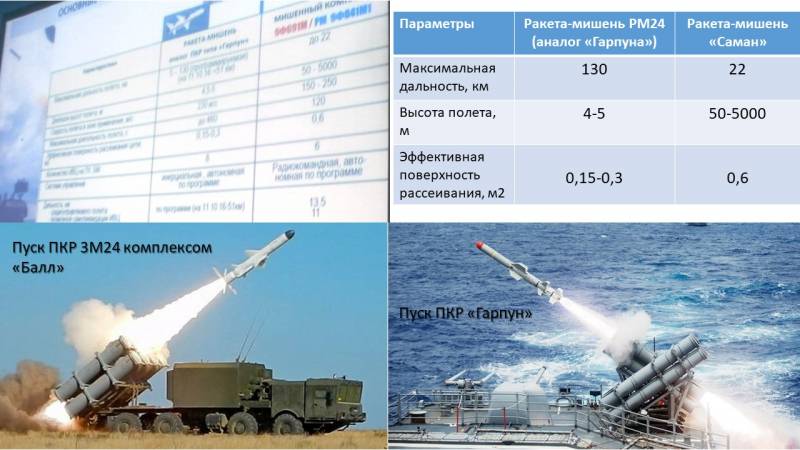 At the same time, it is worth recalling that in 2018, when the Navy first used the RM-24, they were afraid to shoot at it, having specially driven it into the water on the border of the SAM engagement zones. At the same time, it is worth noting that the "land" SAM "Tor-M2KM", which was not completely finalized for sea conditions, was then detected at a great distance and confidently accompanied the RM-24, ensuring the use of missiles on it (those who hit the target already "in the water") ...

In yesterday's firing of the Admiral Grigorovich, the Thor worked again. Despite the fact that there was no official information on his participation, all residents of Sevastopol could see him on the helipad of the frigate "Grigorovich" in recent days, and the official video of the Ministry of Defense of the Russian Federation clearly shows the trace of the "Torovsk" rocket. 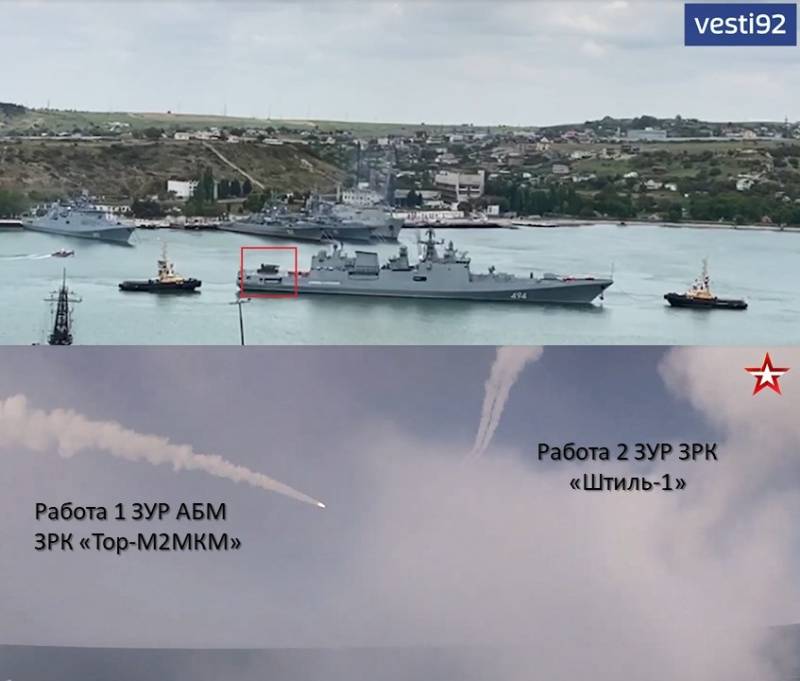 Photo: Vesti92 / Zvezda TV channel
According to updated information, during the recent hostilities in Karabakh, the complex proved to be very successful. However, in the naval version, the land-based Tor-M2KM, in particular, has significant rolling angles restrictions (for this and a number of other features of the Tor-M2KM, a tough and heated discussion took place at the above-mentioned IMMS-19 event). 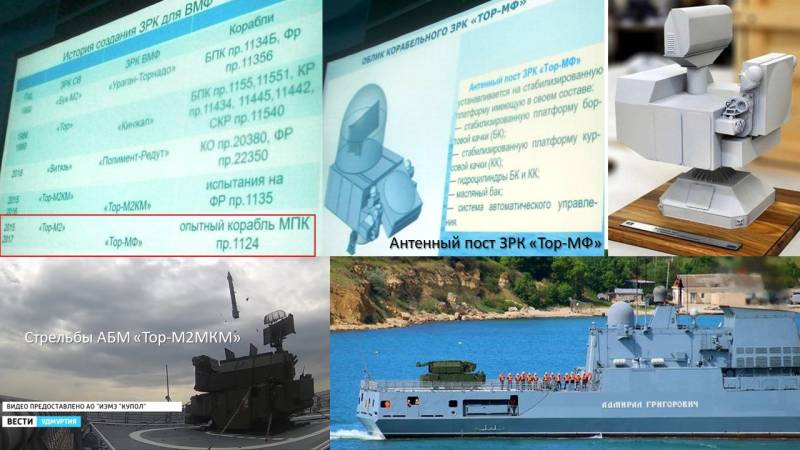 And the most important question here is - where is the "ship Thor", which was supposed to be tested in 2017? What is the reason for such an unacceptable delay in deadlines on the acute topic of air defense?

It is a pity that the missile boat (RKA) "Shuya" from the Black Sea did not take part in these firing. fleet with the Pantsir-M complex, comparative rocket firing is what our fleet really needs. 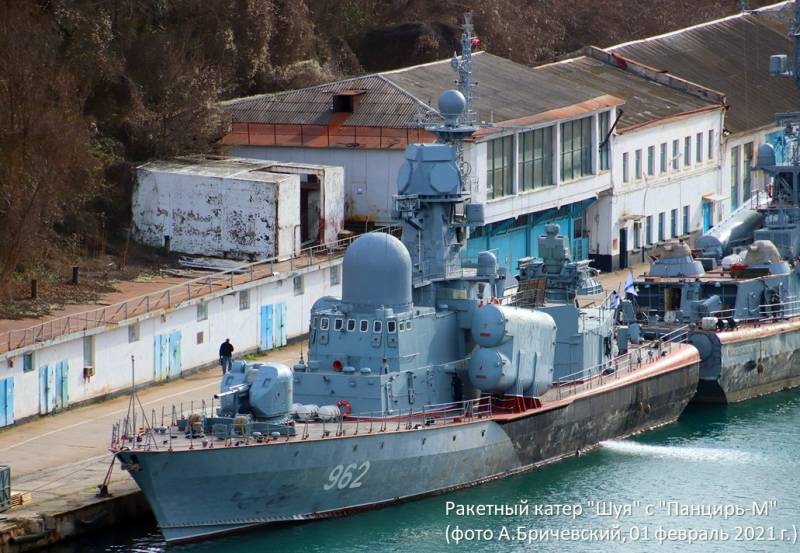 And here there is another very problematic factor of the air defense of the Navy.

RM-24 is very good, but not enough. It is too expensive and small-scale. And with all its good characteristics, it is impossible to provide mass combat training with it.
In addition, having a heavy turbojet engine, the PM24 is, although much less, but a serious danger to ships (if accidentally hitting the side).

What is the hit of a target missile on a ship, our Navy knows too well (the catastrophe of the MRK "Monsoon" and a number of other ships of the USSR Navy). Accordingly, for safety reasons, when shooting, it is necessary to significantly increase the parameter, extremely strict restrictions are imposed on the organization of firing (it is very difficult to create complex tactical episodes and to practice repelling real strikes of enemy air weapons).

Officer (cap. 1st rank) from the Feodosiya training ground (at the Tsushima forum):

The most important condition for each firing ship was the parameter of the flight from the air defense missile system of the target missile (the minimum distance at which the RM approached the carrier ship of the air defense missile system). Much had to be taken into account, since the official documents provided for security measures only for BP without taking into account the special requirements for testing modern air defense systems. And the job had to be done. Deep knowledge of technology, ships and the practical experience of the testers helped. God had mercy, and there were no accidents during the shooting at the Polygon ... Somewhat violating the basic documents on the safety of joint shooting, sometimes it was possible to achieve a parameter of up to 1,5 km or less, the command of the 31 ITs strongly encouraged this, but within certain safe limits.
And here it is extremely useful to recall the foreign experience with mass and fairly light UAV targets, which provide both mass combat training (including those with a small parameter) and safety in the event of an accidental hit on a ship. 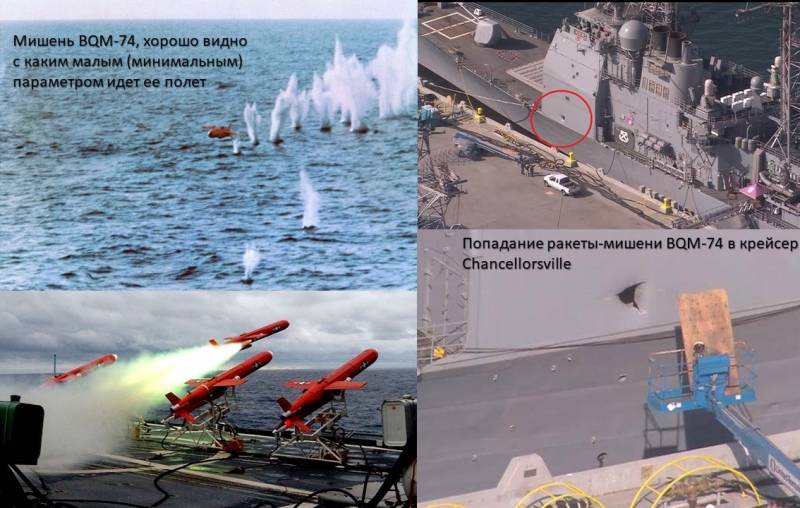 The photo on the right is the hit of an unmanned target BQM-74 Chukar on the American cruiser Chancellorsville. Without any major damage.

And our fleet really needs such a massive, cheap, lightweight and safe target.

An interesting episode on this issue is in the memoirs of an officer of the Missile and Artillery Armament Directorate (URAV) of the USSR Navy, Captain 1st Rank Pechatnikov:

Somehow in the 2000s, I received a serious reproach from the Deputy Head of URAV S.N. Pakhomov:

"Why didn't you worry about creating special targets during the development, because the maximum parameter is only 300 meters?"

It turned out that the Navy did not like to shoot with this complex. The commanders simply do not believe in its effectiveness, and therefore, in order not to create possible emergency situations, they do not fire. I have a video of one of the rare firing of the Kortik. Every 15–20 seconds, a panicky cry is heard:
"Parameter? ...Parameter?"

Naturally, I replied that you need to be sure of weapons, and just train personnel in the classroom. In any case, during the tests of targets based on cruise missiles, no less than 20 pieces were fired, but the crew was trained.

And in order to completely avoid any unpleasant moments, I suggested using UAVs, of which a great many have recently appeared. Even if missed, they will not do much harm. As they say - there would be a desire.
Nevertheless, despite all the above remarks, the shooting carried out on the Black Sea is an unconditional positive. And a serious step forward in ensuring effective air defense of the fleet.