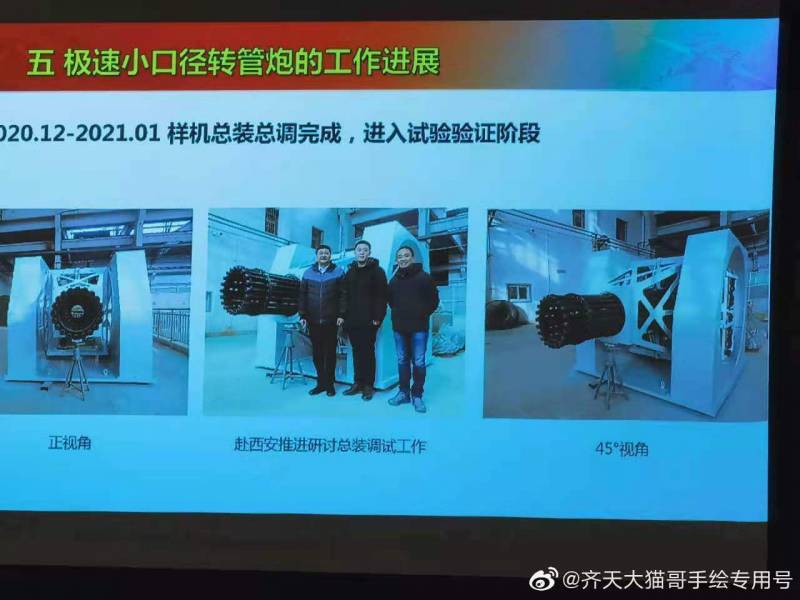 Presentation slide with photos from the assembly shop

China continues unusual and amazing weapons experiments. An experimental artillery unit with a rotating block of 20 small-caliber barrels was recently built and tested. So far, very little is known about it, but the available data allow us to draw conclusions and predictions.

The existence of an experimental gun mount became known a few days ago. In one of the blogs of the Chinese platform Sina Weibo, two slides from a presentation on a promising project were published. They included five photographs from the assembly shop and from the landfill, as well as a few lines of text about the progress and success of the project.

The name of the installation is not given. The developer of the project and the timing of its creation also remain unknown. Perhaps the project was developed by the 713th Institute, which has extensive experience in the field of multi-barrel ship systems. The project was ready no later than December last year, and in January an unnamed enterprise produced a prototype.

According to the slides, three stages of firing tests have already been carried out, the site for which was "Base 051". The first shooting took place at the end of January. Within eight bursts, a rate of fire was obtained at the level of XX090 rounds per minute. At the end of March, the next three volleys were fired at a rate of XX376 rds / min. In mid-April, tests were carried out for the duration of a continuous queue: X00 shots were fired without stopping. 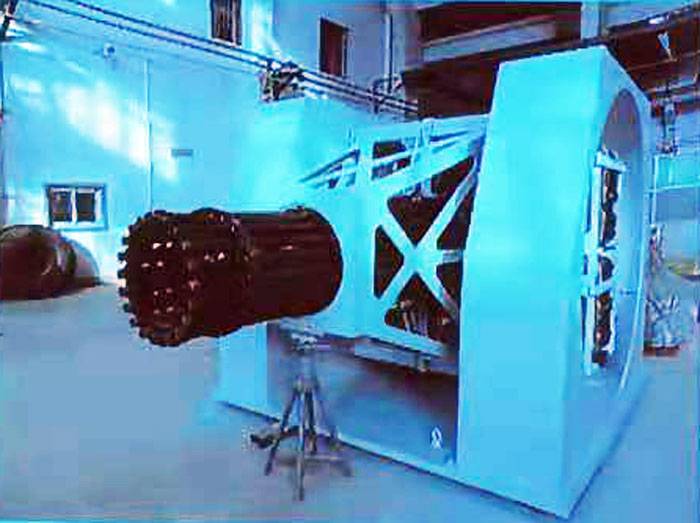 The published photographs demonstrate the general appearance of the experimental gun mount and allow us to determine some of its features. At the same time, it is clear that in its current form, the experimental product can only be used at the landfill and only for testing the units. For practical use, new units and systems are required.

Externally, the installation resembles a gun turret, which did not receive all the casings and armor. It is made on the basis of a rectangular platform with large onboard units, between which an artillery unit is suspended. The breech units are large in size, which is why they take up space not only in the center of the installation, but also inside the side casings.

The 20-barreled cannon is placed inside a typical farmhouse. The front part of this structure protrudes beyond the "tower" and serves as a supporting device for the barrel block. The breech, ammunition, etc. are placed in the back. In this case, the exact layout of the installation is unknown and unclear. In particular, it is still impossible to understand exactly where and how the ammunition load of several hundred shells was placed.

The main element of the installation is a cannon with a rotating block of 20 barrels. Estimated caliber no more than 30 mm. Automation design, barrel drive, etc. unknown. At the same time, one of the main features of the gun can be seen in the available photos. The shot is carried out simultaneously from two barrels, occupying the upper and lower positions. Accordingly, for a complete revolution of the block, each barrel manages to carry out two reloading cycles and fire two shots. The gun uses natural air cooling of the barrels. 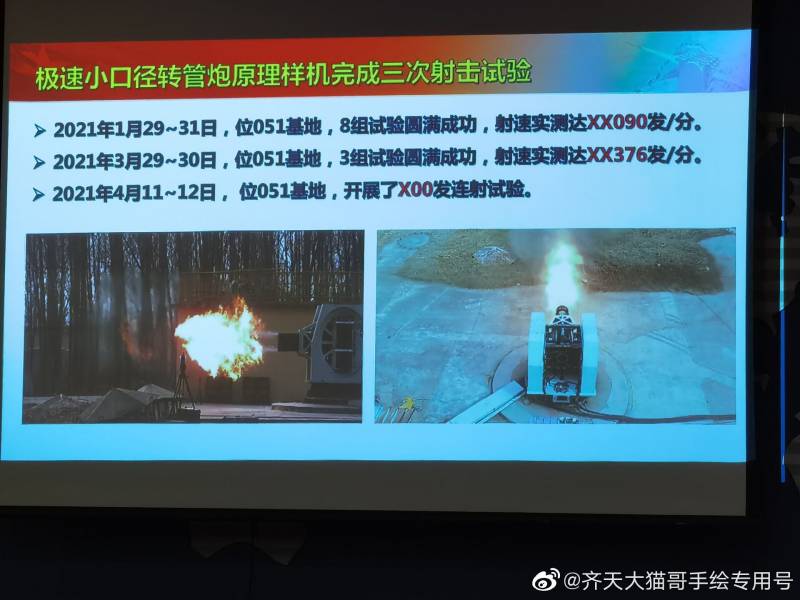 Brief test report and shooting photos
For test firing, the installation was mounted on a pedestal. Possibility of pickup is probably missing. Such capabilities are not required to determine the general characteristics of the gun and to develop its design. Power and control cables are openly connected to the unit.

Apparently, within the framework of the new project, China is trying to create a new ship installation to combat air and surface targets. This assumption is supported by the characteristic appearance of the experimental product, its declared characteristics and possible applications.

In addition, it should be recalled that the Chinese industry has already created gun mounts with an increased number of barrels. So, in the project H / PJ-12 or "Type 730" they switched to seven 30-mm barrels, and on the H / PJ-11 / "1130" product they used 11 at once. Both such installations simultaneously fire only from one barrel.

The exact characteristics of the gun were not disclosed. From the presentation it follows that the rate of fire exceeds 10 thousand rds / min, and the limiting parameters are unknown. It is easy to calculate that a block of barrels makes at least 4-5 revolutions per second, and for each barrel there is at least 8-10 rounds / sec. However, the technical rate of fire may be higher - which changes other parameters accordingly. 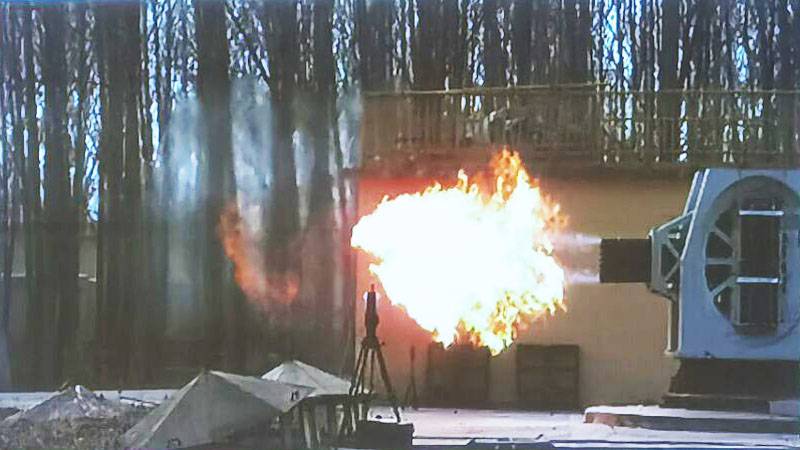 Simultaneous firing from two barrels is clearly visible
It is easy to see that the load on an individual barrel during firing remains at an acceptable level. For example, the Russian six-barreled AK-630 installation with a rate of fire of 5 thousand rds / min. each barrel has only 14 shots / sec. With the same load on the barrel, the new Chinese gun will be able to show a rate of about 16,8 thousand rds / min. In addition, the load on the bolt portion of each of the barrels remains at an acceptable level.

Thus, the main ideas of the project become clear. Using 20 barrels at once, the Chinese gunsmiths were able to increase the rate of fire of the entire system, but saved themselves from the need to develop new barrels with greater resistance to heat and mechanical stress. It was also possible to do with only air cooling - the increase in its efficiency is facilitated by the high rotation speed of the barrel block.

In the context of the new Chinese project, one should recall the Russian AK-630M-2 "Duet" gun mount. In this sample, the task of increasing the rate of fire was solved by connecting two six-barreled machine guns. This approach made it possible to do without the development of a fundamentally new weapon, but limited the maximum rate of fire of the complex to the sum of the characteristics of the two assault rifles.

Obviously, the 20-barreled cannon still exists only as a prototype on a simplified installation with limited functions. In the near future, the developers will have to complete testing and fine-tuning, which will allow us to move on to the process of creating a full-fledged combat-ready ship installation. At this stage, gunsmiths will have to face new challenges and questions. 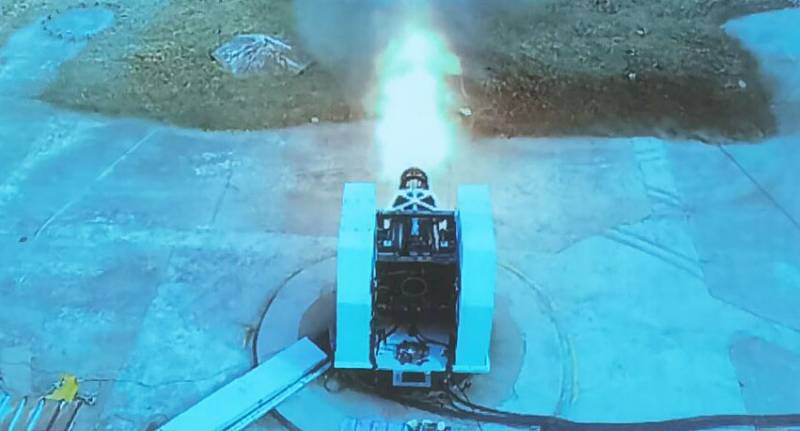 A promising weapon will require a new, more durable installation. She has to experience the effect of increased recoil, and the guidance drives must cope with the large gyroscopic moment of the barrel block. Perhaps a tower installation for a new cannon can be created using ready-made components borrowed from existing products. It should be expected that there will be increased requirements for carrier ships.

The issue of ammunition supply is to be resolved, and the volume of the store is of particular importance. For example, later modifications of Type 730 installations have a ready-made ammunition load of 1000 rounds, which is enough for about 14 seconds. shooting. A new gun for the same duration of fire needs stores for at least 2-2,5 thousand shells. It will not be possible to place such ammunition in the volume of the tower, which will require some structures for the underdecks.

The least difficult issue is the creation of fire control systems. On the model of existing installations, a promising one can be equipped with a radar sight and an optical-electronic station, as well as a remote operator's console. Fundamental innovations that are particularly complex are not required in this area.

It cannot be ruled out that the ship's gun mount will later become the basis for a land-based air defense system. The tower and other units can be installed on a wheeled chassis, providing high mobility. Such principles have already been implemented in the LD-2000 project based on the H / PJ-12 installation. 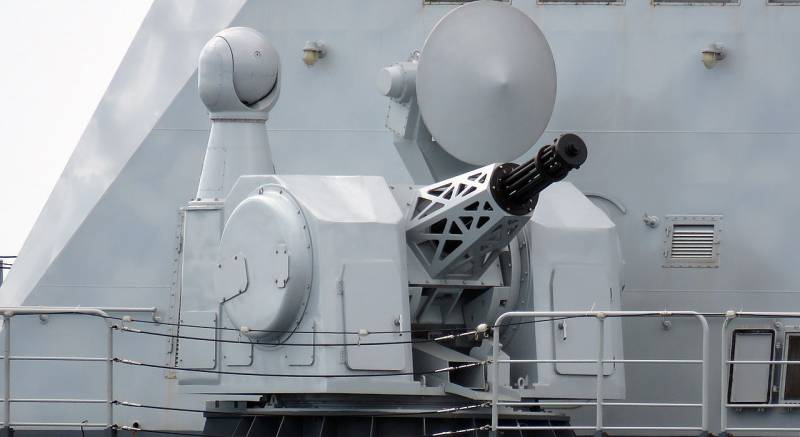 From experimentation to rearmament

China pays special attention to the development of its naval forces and their armaments. The latest project of the super-fast 20-barreled cannon is another step in this direction - and such a step is extremely interesting and promising. The gun has reached field tests, during which it already confirms its performance and shows record performance.

The further fate of the project remains uncertain, but there are reasons for optimism. The industry is already gaining valuable experience in the field of artillery, and the navy and ground forces can count on obtaining new highly effective models. However, the real future of the project and the whole direction so far depends on the progress of the current work. Time and new information leaks will show whether the set objectives will be solved.